A teacher reflects on the school day, when language barriers left her in an awkward situation. 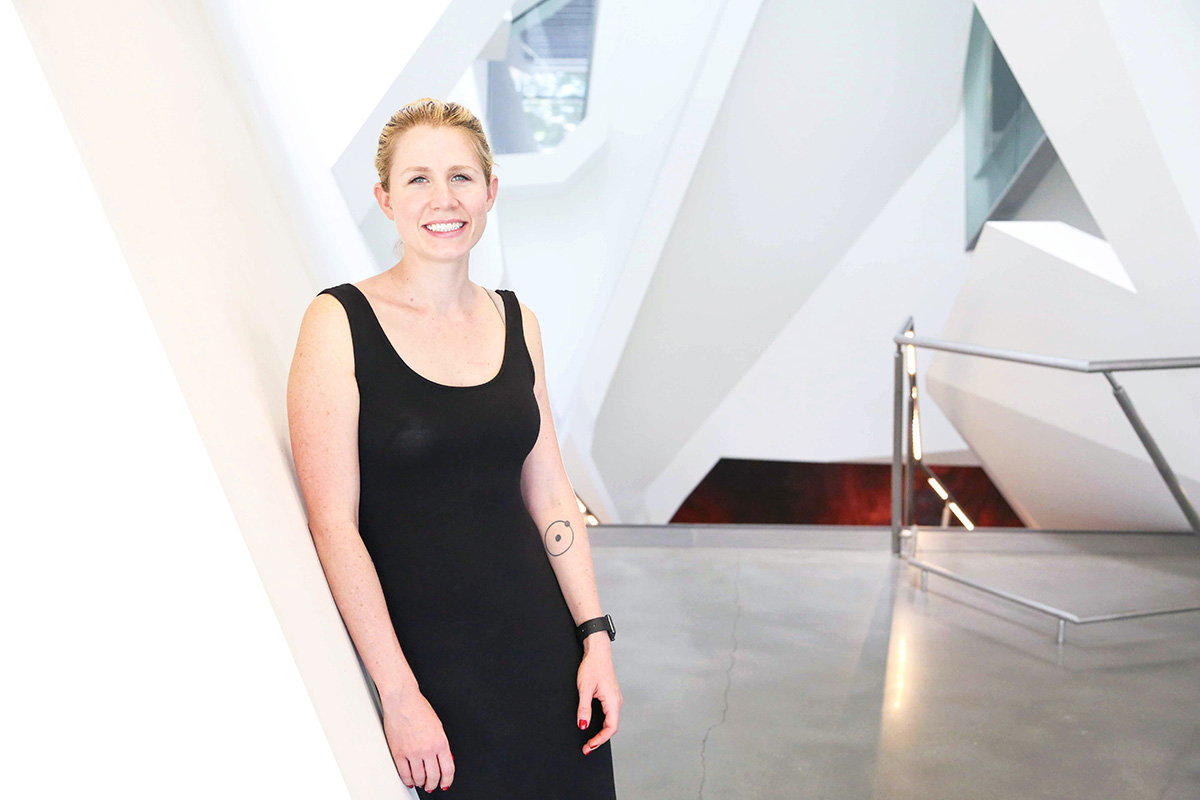 Meet Christine Corbett Moran, a hacker, explorer, scientist, and former roller-derby player. Her work has brought her to NASA hangers, TEDx stages, hacker conventions, and campus anti-assault initiatives. She splits her time across many different projects, each demanding their own disciplines and knowledge. She developed Circle of 6, an app that enables networks of friends to respond to emergencies or assaults. She belonged to the team of hackers who built Signal, a text message and voice app that enables end-to-end encryption. She’s contributed to numerous open source projects, published long academic papers about black holes we couldn’t even pretend to understand. Oh, did we mention she also has a Ph.D. in astrophysics? How the hell can one person do all that? We hit up Christine to find out!

What did you do today?

Today I flew into LA from a trip to the Space Coast and Kennedy Space Center to watch the, unfortunately failed, commercial resupply mission 7 Launch of SpaceX’s Dragon Capsule aboard the Falcon 9 Rocket. I went into work at Caltech, where I presented to one of the research groups I work with here at Caltech about some work I’ve been doing. I then gave a tour to a young budding scientist in high school who is a family friend of a colleague, wrote a blog post about the SpaceX mishap, and began to prepare some summary of work I’ve been doing this past week on a planned suite of simulations involving the collapse of to-date hypothetical objects called supermassive stars.

What does the work of a theoretical astrophysicist look like?

In terms of tasks, I write, speak, travel, attend conferences, meet collaborators, calculate, program, run simulations, advise and sometimes teach courses or workshops. In terms of research goals, I’m currently working on understanding how the supermassive black holes we observe to be at the center of most large galaxies formed, which no one quite has an explanation for. I also work on fundamental gravitational physics, including how small modifications of general relativity might provide alternative explanations to the cosmological constant to explain the observed accelerated expansion of the universe.

Mentally, as theoretical physicist, I’ve put tremendous effort into being able to operate on and push the cutting edge of intellectual knowledge. Likewise, space exploration appeals to me as it pushes the boundaries of the cutting edge of physical knowledge. More fundamentally, I want everyone to have the opportunity to go to space (in that scenario we’d be a post scarcity society with plenty of room to grow), and as an adventurous activist I’m in a place where my advocacy can help make that a reality. Whether or not I personally go to space, I’ll consider my drive a success if by helping create in however small a manner cheaper rocketry technology and a more socioeconomically equal society, and offering to put my own skin in the exploration game I make the reality that every human has the choice to flourish on Earth or beyond.

Would you volunteer to be one of the first humans to go to Mars, knowing that you'd never be able to come back?

One common criticism of space exploration is that it drains money and resources that could be used for more earthly concerns. What's your response to this?

My response is twofold. First, the claim is false. Space exploration, like military work, enables an unprecedented amount of technology transfer to the private sector – that happens whenever humans try to solve a nearly impossible problem and push the bounds of technology. Unlike military work, space exploration is peaceful and has a unique opportunity to foster international collaboration. So,, so if you’re going to siphon the GDP, do one thing: space is the place. Secondly, even if the claim were true, who cares?. Things like the arts, music, and philosophy are what make us human and make solving more earthly concerns worthwhile. Space exploration helps answer and address a fundamental human drive to know their place in the cosmos and strikes the same chord that the arts, music, philosophy and so on. does. Should we not fund the arts until all of humanity's problems are solved? No. Of course there should be a balance, and a focus on transferring research breakthroughs made in space to Earthly concerns.

I have this fantasy that all the badass women programmers and scientists I know watched Hackers and Ghost in the Shell as teens. Did you? What cultural products were influential or inspired you as a child or teenager?

I read a lot of classic literature and philosophy, I kind of bypassed pop and sub cultures early on (though I knew I didn’t fit into to mainstream early on, so my friends were in the midst of a variety of subcultures), and didn’t listen to much music or consume much modern media until I was 18 or 19. In terms of books that were influential, I read Stephen Hawking’s A Brief History of Time which helped push me in my current direction of thinking, that many of the fundamental problems of philosophy are now squarely in the domain of physics.

In the programming world, people take a lot of pride in being “insanely productive”. But you really are incredibly productive – from doing a double major and double minor in college to working on a bunch of iOS projects simultaneously as pursuing your Master's and PhD, all the while giving lectures and participating in conferences, and still managing to have a “life,” so to speak. How do you do it? What’s your advice for people who want to be able to do as much as possible with their life?

I worry that I might sometimes give the wrong impression: I have made a lot of sacrifices to be “insanely” productive, and I have had a lot of help in terms of collaboration on projects I get partial or inadvertently full credit for. As some examples of sacrifices: I don’t really date, when I do it’s with the caveat that my work takes priority; I move all the time, and even my best friends I might see once a month. Moreover, by splitting my attention, each project suffers, and sometimes I’ve had to hold one project back to focus on another in a crises. So my first piece of advice is that “insane productivity” comes at a cost. Here be dragons. I have decided that the opportunities for making a difference, exploring, travel, and intellectual growth have been worth the sacrifices. If you, too, decide this life is for you, (despite my warnings and the recent cultural backlash against busy), then I can give you some advice. I keep physically and mentally fit. I work out, mostly get eight hours of sleep a night, meditate regularly, and make time for hobbies. My hobbies fall away occasionally in a crisis, but building in that block into my schedule means I already don’t have something I can’t cancel there. I keep extremely organized, with a detailed calendar and research notes for every minutia, and always try to be helpful where I can to things, people, and causes I believe in. On a day-to-day basis I have a set routine, but I’m also organized enough and always have kept a flexible work environment that I can throw it away on a moment's notice to follow inspiration or an adventure.

What’s a super computer, and what is it like to work with one?

The definition of supercomputer changes over time in terms of power but basically its anything that isn’t available in off-the-shelf configurations for computation. That might mean a modern supercomputer is a bunch of off-the-shelf computers, or specialized processors, networked together, with special equipment or without, and with or without computation accelerators such as GPUs (which power great computer graphics but can be repurposed to create fast scientific calculations). It might also be a single computer with simply a way-too-expensive for the average person amount of working memory (RAM). I work with supercomputers that are the equivalent of hundreds to hundreds of thousands of regular desktops. They are accessible remotely from your regular machine with the right credentials (which you can get by building your own, by paying Amazon, by working at the right place, or applying for a grant allocating computer time from a foundation or laboratory). Once you are in, you can build and run regular software. But the real purpose is to run running software using computer programming technology that take into account that it’s running on many computers at once, communicating, and updating the calculation progress on each to achieve a common goal, or take advantage of the greater disk and memory capacity. Once you design such a program, you typically submit your computation to a waiting line of computations and there’s an algorithm that schedules it to run in a way that as many people as possible can get their computations run.

What’s it like to be such a public person, both in the privacy/encryption debate and sexual assault? Have you ever been the target of harassment or hate campaigns, from individuals or authorities?

I’ve been lucky that nothing of note has happened, though it is something that’s always part of my mind share. I believe I have self-censored because of the fear of harassment, so I don’t think that just because I haven’t experienced it, that’s a pass on the community.

What do you hope to accomplish in your lifetime?

Any new or upcoming project you’d like to plug?

I’m trying to make it down to Antarctica as a winter over, on the exploration theme, preferably on a scientific experiment such as BICEP, SPT or IceCube. As such I’ve been honing my mechanical engineering skills in addition to my computation skills. So that, in addition to getting my private pilot’s license, has been a big focus of my hobby projects in 2015. Follow me on twitter for updates.