When a Coal Mine Fire Erased a Whole Town

World Homeless Day There are millions of homeless people in the US and many, many more empty houses. 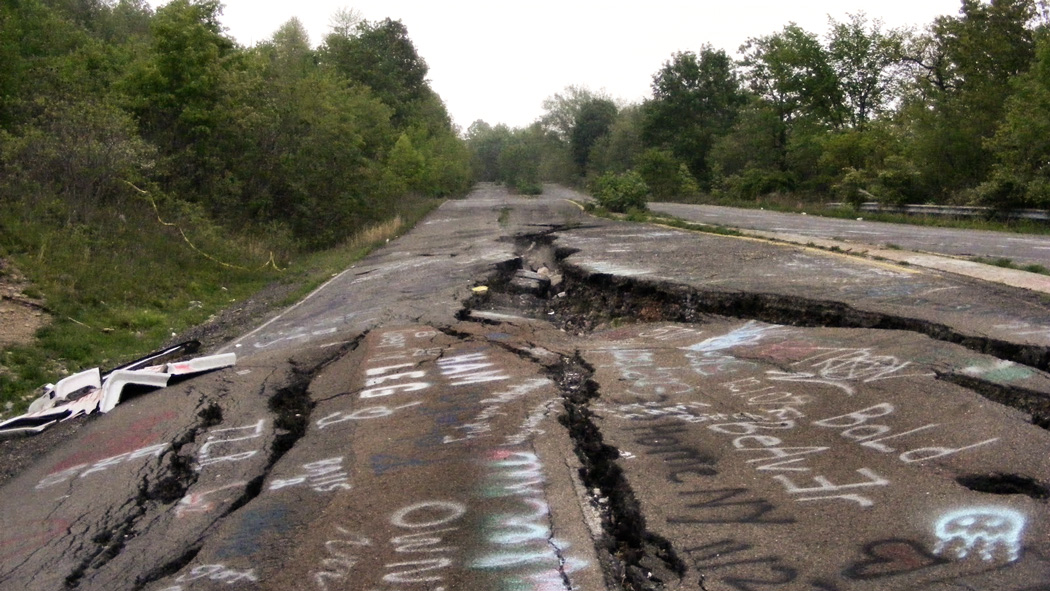 In 1962, Centralia’s coal mine started burning and never stopped. The underground fire poisoned everything and everyone, and yet people refused to leave for decades. Is there a difference between staying in a toxic relationship and living in a toxic town? Kara McGinley drives straight into the hazard to find out.

Centralia was a town in Pennsylvania not unlike many other stereotypical Pennsylvania coal mine towns – filled with generations of families and collective-oriented, trusting neighbors. ¶ In May of 1962, volunteers of Centralia, PA were hired to clean up the local landfill by burning its contaminants, just like they had every Memorial Day before. Except this year the fire didn’t go out. Instead, it spread through an unsealed opening in the landfill and ignited the abandoned labyrinth of anthracite coal mines beneath Centralia’s surface, an accident that is still scorching the earth to this day. Slowly but surely, Centralia diminished from an all-time-low population of 1,000 in 1981 to an incomprehensible 10 people in 2009. It’s estimated that the fire will burn for another 250 years.

Nowadays, people mostly visit Centralia in hopes of experiencing the ghost town that the horror films and Japanese video game series Silent Hill are allegedly based on. Essentially, the town attracts tourists looking for the fearful thrill that abandoned places provide. 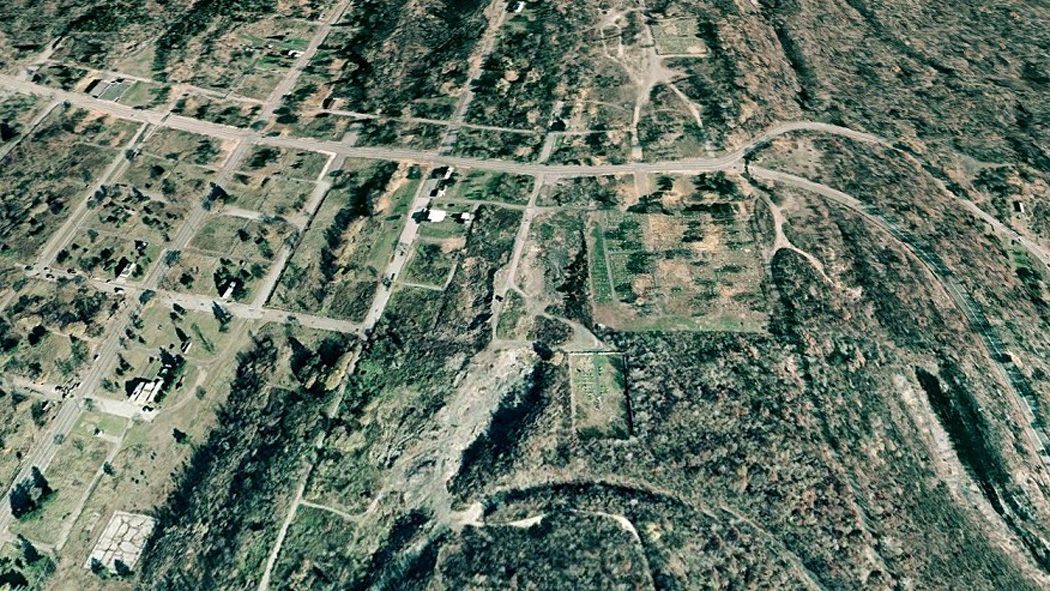 So, I drive two and a half hours to Centralia, something I’m advised not to do.

“It’s literally just a road,” my friend told me before refusing to join.

It’s cold and there’s steam coming from the ground in certain areas. There’s a faint fog and few other people here. I do not feel scared, rather a bit uneasy. I’m searching for meaning, except my friend was sort of right: Centralia in 2016 doesn’t have much left to it. Almost all of the buildings have been knocked down, shrubbery is overgrown and the stretch of Route 61 that used to run through the town is cracked and now nicknamed “graffiti highway” amongst travellers. The road was closed in 1983 when it was determined that the fire burned directly below it, exceeding temperatures of 800 degrees and causing the asphalt to melt. Graffiti highway lives up to its name, boasting an array of obscene phrases like “welcome to Hell” and a plethora of genitalia drawn over the broken gravel that was once the most prevalent route in and out of the town. There’s one church left standing that looms above Centralia, as if it is keeping a watchful eye on the tourists invading the grounds below. 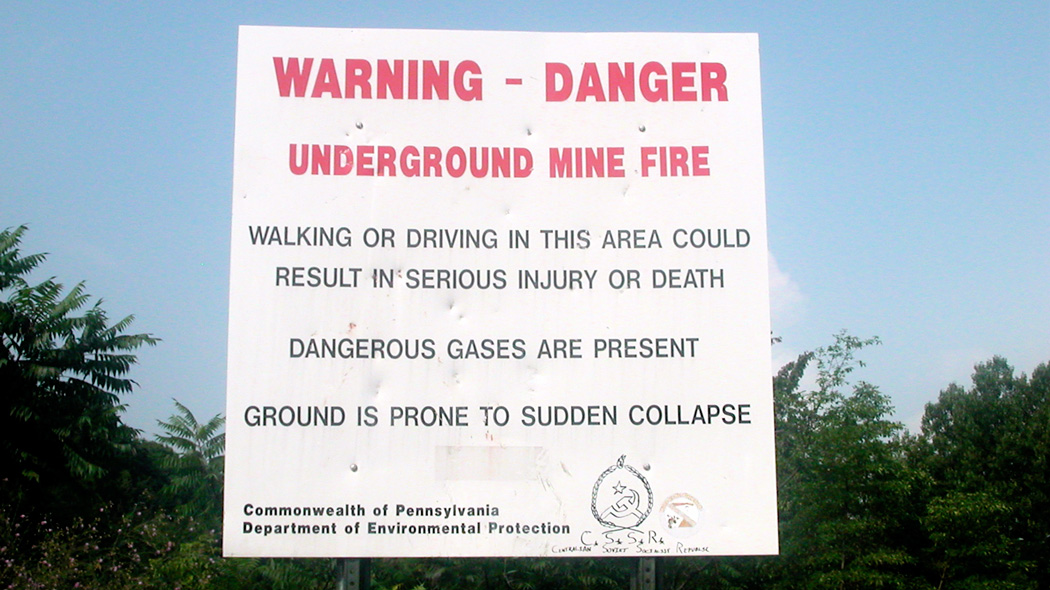 The complete story of Centralia is a long and frustrating one. In his book Fire Underground, David DeKok chronicles the origins of the fire and the twenty-plus years of failed bureaucratic endeavors to end it. The landfill was located in the outskirts of town and a few days after burning the trash inside it, the town council noticed the flames were still lit. In an effort to put out the fire, the Centralia Fire Company used water hoses multiple times, yet still allowed garbage to be dumped inside the landfill. The fire company’s strategy of using mostly water and rock to diminish the flames always proved ineffective.

After months of outcries from the people of Centralia, the Department of Mines and Mineral Industries got involved, but with their low budget the trench they planned to build to block the fire was delayed, and they essentially ran out of money before they could finish it. Centralians were let down again shortly after, this time by the United States Bureau of Mines, who designed a new trench that cost more than the town was worth. The government decided the trench was too expensive and the result was tragic: the fire hit the town.

The botched attempts continued with the government drilling boreholes all across town to monitor temperatures with CO2 detectors. At this point, things were so far gone that townspeople were complaining of constant headaches and nausea, and started to move out of Centralia. In 1979, the ground near the mayor’s gas station got so hot that it began to steam, measuring at 135 degrees and almost causing an explosion.

And then, the final turning point: On Valentine’s Day of 1981, a 12-year-old Centralia boy named Todd was playing in his grandma’s backyard when he saw a strange opening in the lawn. Curious, he decided to inspect the hole, a choice that nearly cost him his life. Luckily for Todd, he grabbed onto the nearby tree roots quickly enough to hold himself as his cousin rescued him from sinking further in. The soil and rock above the mine chamber had finally collapsed, exposing a deep, gaping pit of molten hot earth.

The fire was too out of control to deny. Centralia was officially unsafe to live in, but many Centralians still refused to leave their homes. 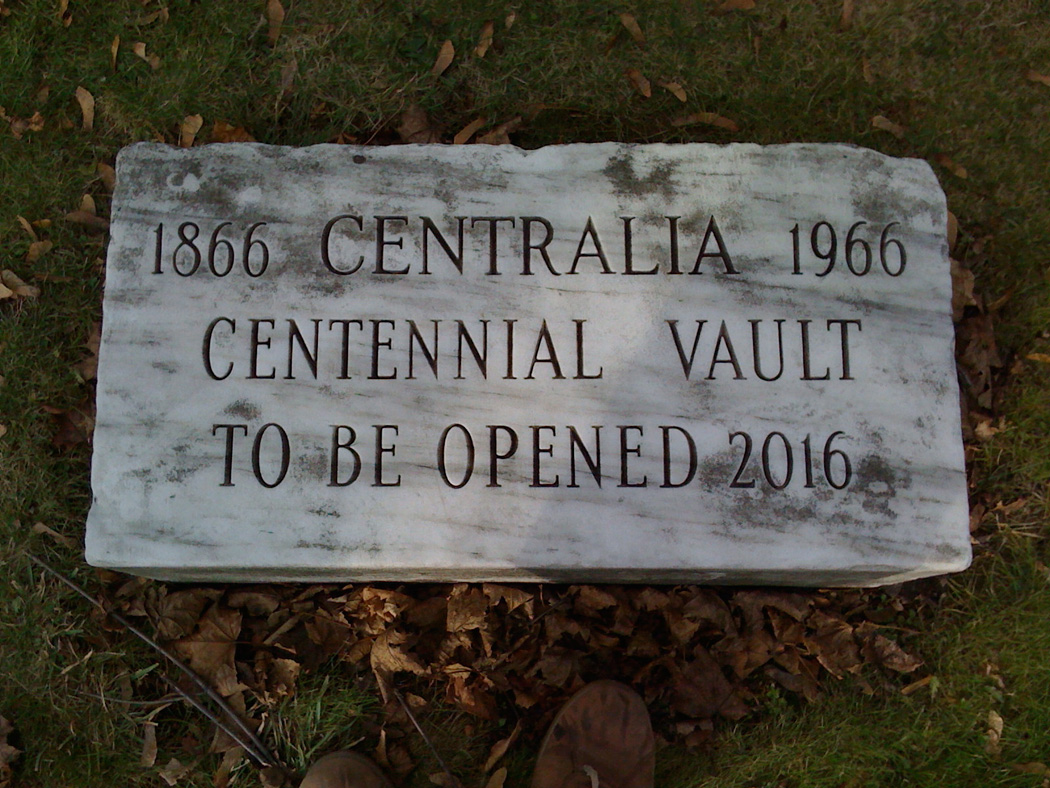 Walking around Centralia, I find it hard to imagine the lives that once flourished here. I came alone, which I think was the right choice. I thought about asking my ex to join, but I’m glad I didn’t. I don’t know what I’m looking for, but I know I can’t find it with him. I’ve come here because I just turned 25, recently dealt with many abrupt deaths of young friends, ended a cycle of bad relationships, and in turn I have become consumed with the jarring unease that people can disappear completely, that I can cease to exist in a life I was once intertwined. After I lose someone to death or to growth, I’m always reminded that it’s important to keep memories alive, but once time dims the flame of your memory, how do you hold the smoke?

To me, desire and loyalty are some of the strongest and most complex characteristics in humans – the desire to hold onto something harmful because of an undeterred loyalty inside us, the instinct to remain in places, in relationships. Is there a difference between staying in a toxic relationship and living in a toxic town? Specialists predicted the carbon monoxide would eventually suffocate most of the oxygen in Centralia’s houses. The air was killing them but they kept breathing it. His arm around me started to feel like an anchor but I still always held his hand. Toxic isn’t so bad if it feels like home. You can work up a tolerance to most types of poison. 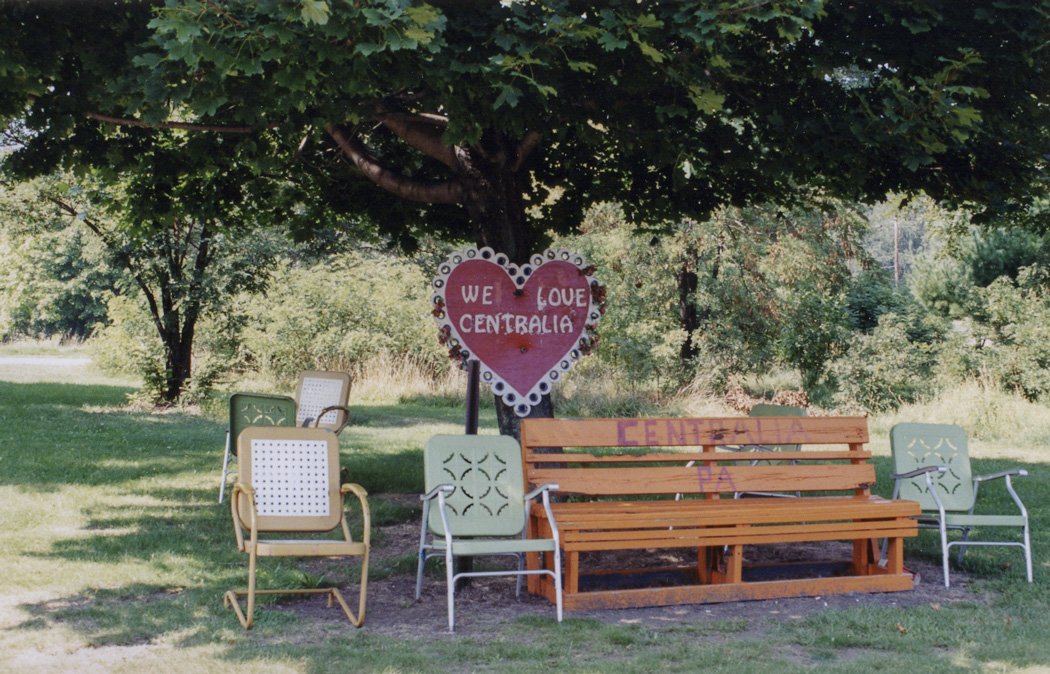 The people of Centralia clutched onto their community for as long as they could, and unlike most things held too tight, the end of Centralia was a slow burn. In 1992, after years of inadequately reducing carbon monoxide levels and failing to persuade townspeople to leave, Pennsylvania Governor Bob Casey condemned the borough by calling eminent domain on all property. There was a legal battle afterwards, but Centralians ultimately didn’t stand a chance, and the government began to blame them for getting in the way of their efforts. Ten years later, the postal service revoked Centralia’s zip code, wiping Centralia off the map like an annoying bug on the government’s shoulder.

By 2009, Governor Ed Rendell had begun to formally evict the 7 to 10 remaining residents in the town. The civilians were mostly old at this point; many died before eviction and the remaining people were forced to forfeit their homes to the law. 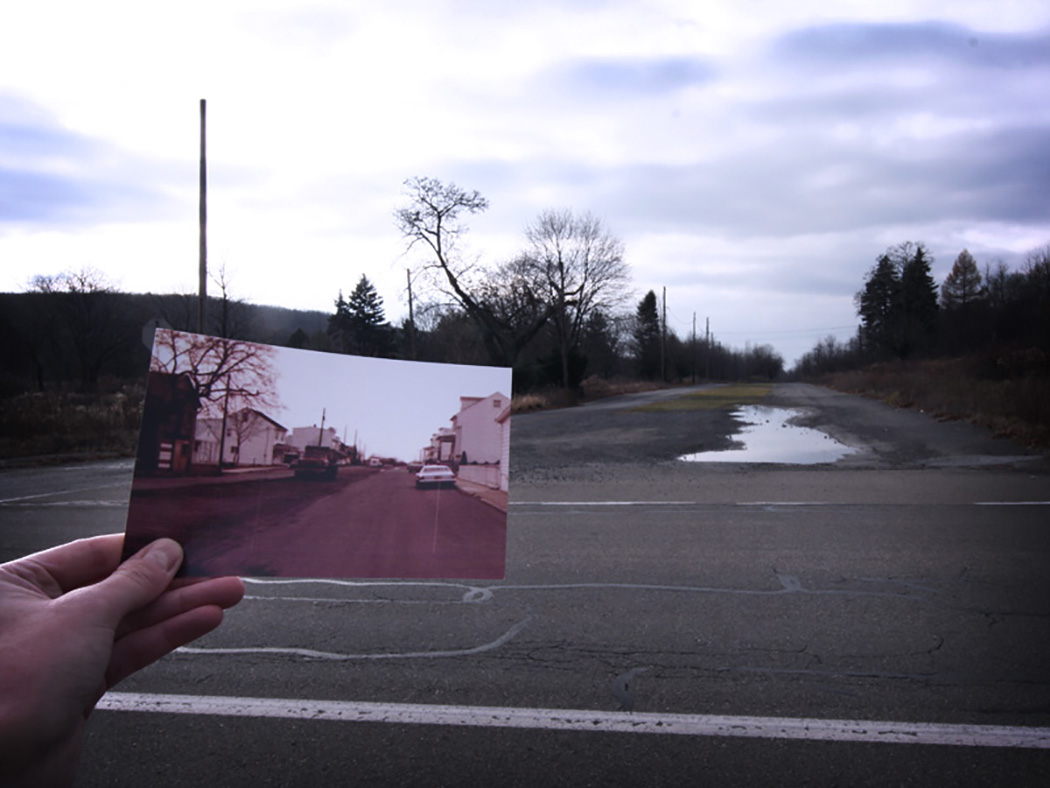 I leave graffiti highway to see some of the few sights still standing. This ghost town does not reek of its past like I thought it would. Ironically, the most alive part of the town is the cemetery. Locals come back frequently to visit family members, and many people request to be buried in Centralia, to finally return home.

I’m wondering if a town can vanish, if a community can disappear, does love die with it? Or does memory always keep it alive? When our relationship ended, I didn’t know where to go.  Sometimes you can’t make a home wherever you want, from a distance it becomes obvious that toxicity is not sustainable. That toxic waste is better left alone.

The people of Centralia recreated the town online, through private and public Facebook groups where they share stories and curse the abandoned tour spot their beloved town has become. Reading their comments, it’s easy to picture them sitting around a picnic table with their children playing nearby, maybe discussing the day’s work or the newest film to come out. Either way, I imagine they are content.

I continue to walk the town until I get to the barren area and I feel the pain in my chest of missing someone who might never come back. There’s nowhere left for me to go. The streets are gray with soot and rock. I’ll never be able to see it, but I know the fire is still there, burning underneath. 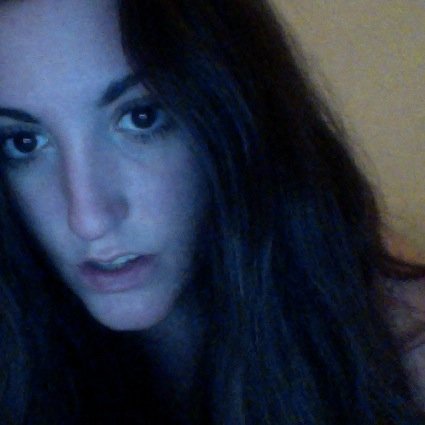 Kara McGinley is a writer from Pennsylvania and lives in Brooklyn, NY.