This Is Make-Believe This is The Woo Issue, in which we cast a spell on the Pentagon and conjure the spirits of darkness and death.

Wikipedia Loves Monuments Underneath Wikipedia’s drive to preserve lies a deep fear of loss and instability. 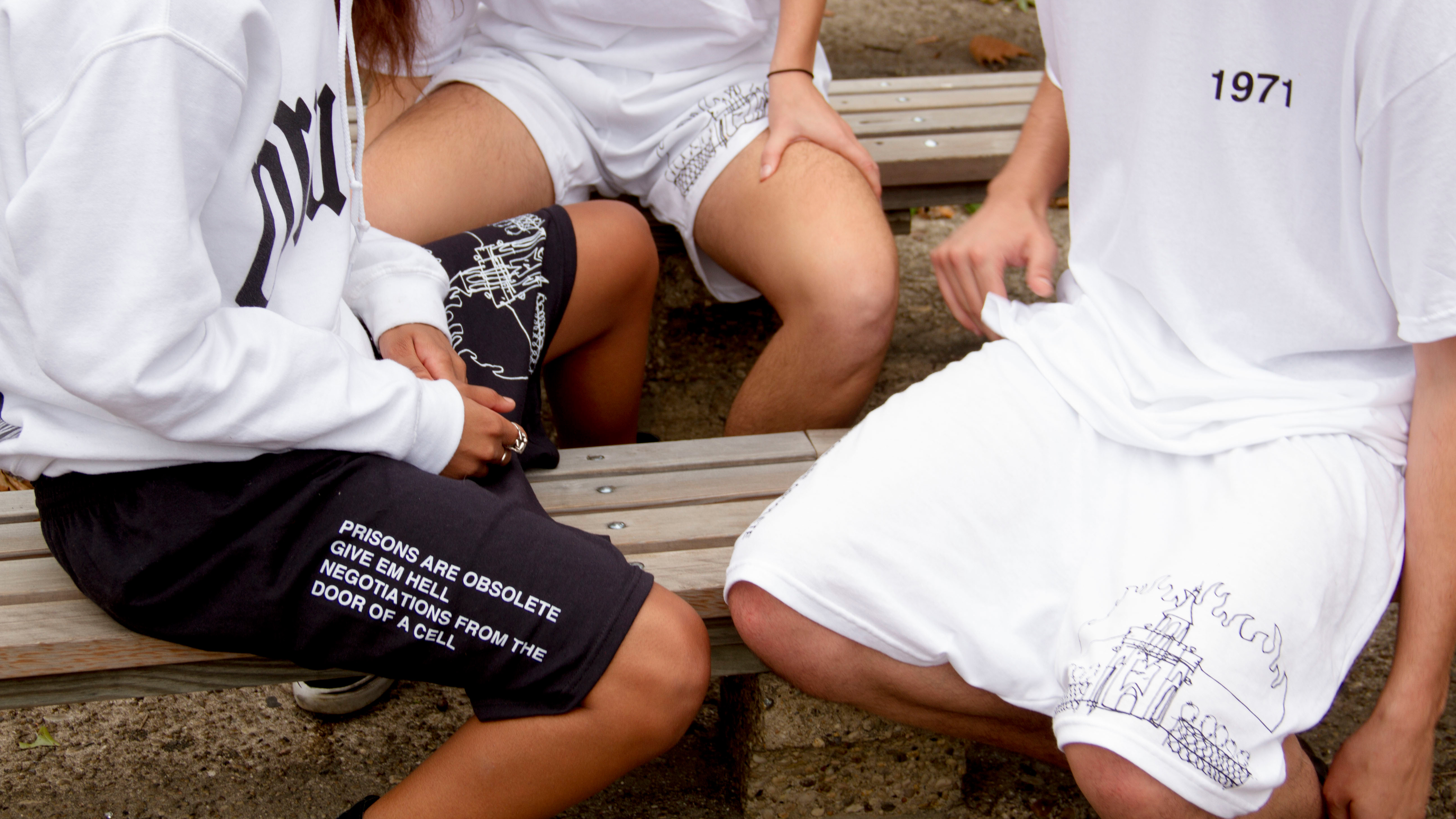 Women’s representation in skateboarding is surprisingly lower on my list of concerns for Brujas than one would guess. Representation signifies reform.

"Correction: Fire To The Prisons" situates the back of the Brujas recently launched streetwear line, the 1971 Collection.

New York’s radical femme/queer skate crew have come to be known in the last few years for their engagement in the political discourse of the skatepark, actively challenging the dominant trends of patriarchy and white supremacy. They now move to make their mark on the prison-industrial complex launching a brand new 1971 streetwear collection which intentionally coincides with the anniversary of the September 1971 Attica Prison Uprising where nearly a thousand prisoners rioted and took control. With their Kickstarter campaign well on its way to doubling the initial goal of $10,000, Brujas mean to roll out fresh gear in order to support prisoners in New York State with a portion going directly into a fund for queer and trans prisoners of color.

Arianna Gil, the founder of Brujas, spoke with us a little bit about the 1971 line and Brujas' part in the greater discourse of prison abolition. 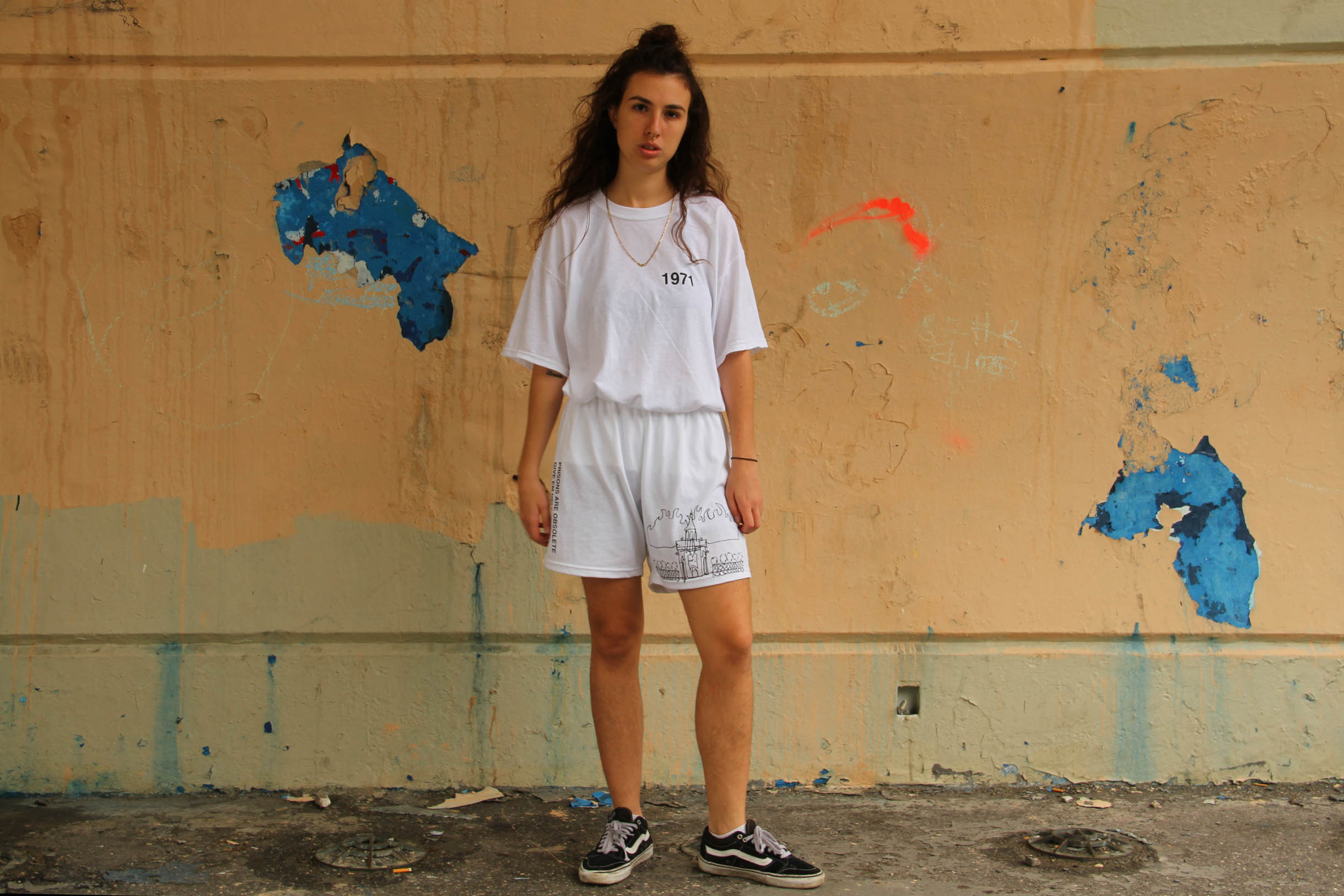 Sincerely, congrats on the Brujas x 1971 line startup, really appreciate the look and anticipate the launch. It is easy to imagine though that this is a particularly busy time in your life?

I guess. Most of the last two months I focused my creative energy on the 1971 concept, I’ve also been interning at GHE20G0TH1K and developing programming along with other Brujas for a two-month long residency at Recess gallery. A few weeks ago we paired up with WAR OF ICAZA for BRUJA WAR where we brought our #deathtoallmalelineups campaign on the road to Los Angeles, Oakland, and Portland for five events. I’m just trying to do whatever I feel like doing these days that makes sense. The largest national prisoner strike in history started a few months ago, it seemed appropriate to engage with that. Things are busy but my head is busier, so many cool things to try, to create, to mobilize, so little time. I still try and find time to make music and practice bass, skateboard, attempt intimacy but most everything these days has been about this work.

How did you and the Brujas collective develop the concept for 1971?

The idea of having a legal fund came first. I think we had our first meeting in early August to discuss what we could do to make Brujas more politically involved outside of the discourse of identity politics and the liberal media gaze. I studied Comparative American Studies at Oberlin College where I was surrounded by a lot of scholarship and on-campus activism addressing problems of underrepresentation. Though these conversations always happened with recognition and knowledge of the complex histories of colonialism and the influence capitalism has had on the interpolation of identities, the praxis that resulted usually ended up having more of an effect on the inter-personal relationships and power dynamics between people on campus than any work that challenged the hegemony of institutions of domination and control. Women’s representation in skateboarding is surprisingly lower on my list of concerns for Brujas than one would guess. Representation signifies reform.

And the black and white two-piece look?

My collaborator Isabelle Nastasia and I sent a bunch of textual and video references to two of the most multi-talented artists I know, Robin Giordani of The Corner Society and CZARQUAN of Noctrunal Sons Posse and worked through designs with them over a few weeks. Some of the design obviously reflects jail garb, but it is more supposed to represent a P.E. (Ha! Get it? Political education) uniform for this next generation of prison abolitionists. 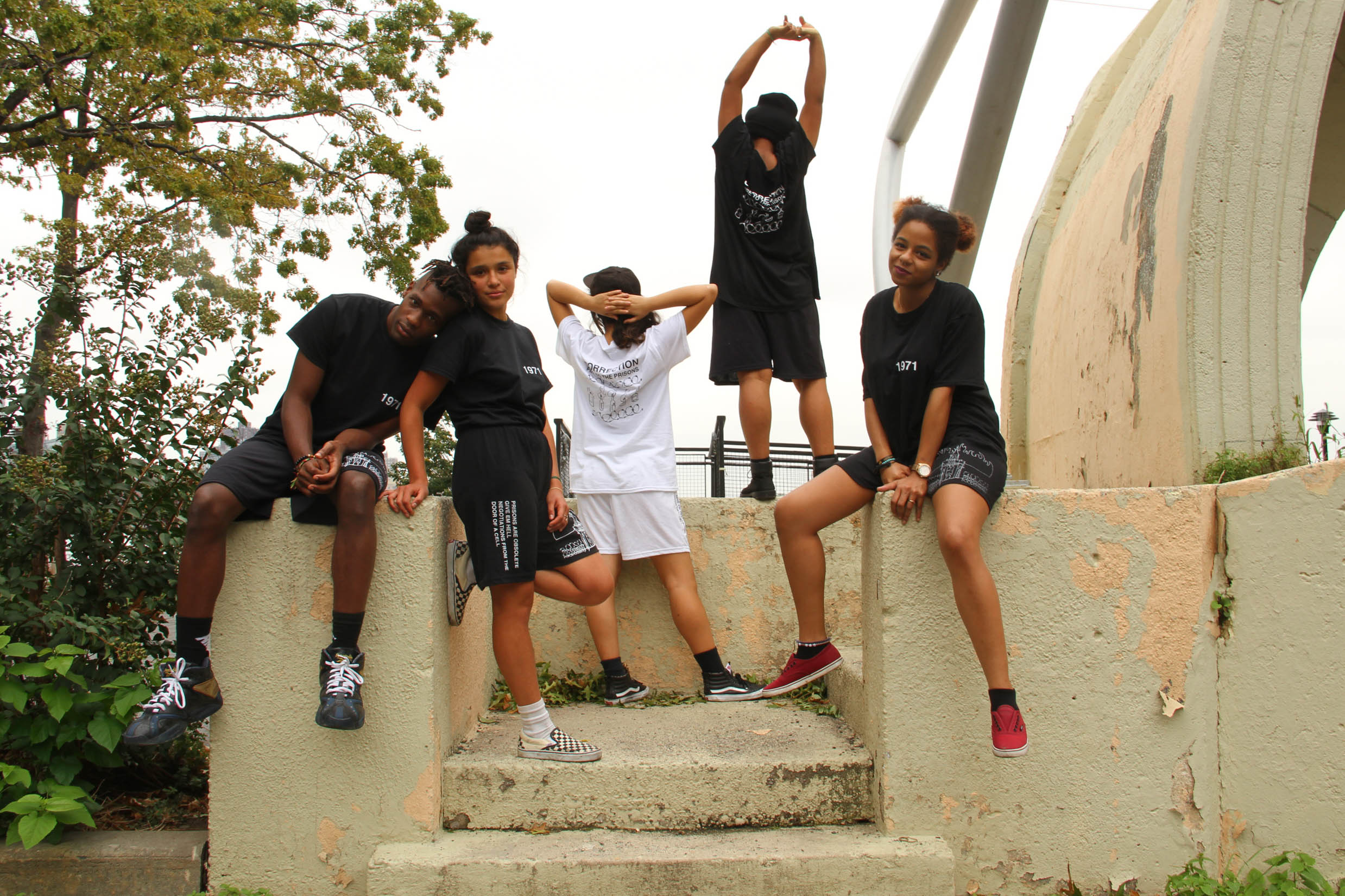 The anniversary of the Attica prison uprising recently passed with the start of a nationwide prisoner strike. Did your crew intentionally time the 1971 Kickstarter and clothing-line release around the anniversary and strike?

Yes, that is how we gathered the language and branding concept behind 1971. 1971 is unique for an anti-reformist project because it draws influence from hype culture as well as the political fundraising models anarchists and abolitionists have been using for centuries. The hype economy, which I would loosely describe as an urban consumer-capitalist cultural phenomenon, is propelled by limited edition clothing distributed selectively and overseen by both huge design companies and niche brands. The styles and marketing for these products draw from youth subculture groups, who often find reflections of their images and culture reduced and essentialized. Dickies, for example, just launched a campaign with a group of five or six women of color skateboarders from Los Angeles. Their images were similar to many of the images Brujas has created with media platforms over the last two years, yet they were one hundred percent apolitical and decontextualized from the politics that inspired the Brujas reference images they were using. The hype economy is liberal and dependent on “authenticity” and identitarianism, yet using its model (limited edition streetwear) to launch a political campaign/fundraiser is, in our eyes, a subversive appropriation of a tactic that successfully distributes millions of dollars of apolitical merchandise to young people in urban centers all over the world.

It appears 1971 hit its goal and is already funded. How are you feeling about it since the launch of the Kickstarter?

I am grateful for 1971 because it’s providing me a direction to experiment with taking Brujas away from goals of “representation” based on our identities toward cohesive political goals. In my experience, cultural entities that are based primarily on identity are easily co-opted by corporations and sometimes lead to interpersonal conflict where different types of oppression are triangulated and positioned against toxic “authenticity” models. 1971 has helped people in my generation, who are tapped into streetwear, find ways of identifying politically.

For me, as one of the co-founders of Brujas, this has been my first major move to push back against what has been a consistent effort by the public, press, and dismal internet “progressive” blog culture to paint Brujas as an identitarian entity (all female, latinx, skate crew, from the Bronx). I see the way identity politics can be used as a way of differentiation to gain power and access into spaces that are structured by capitalism. This isn’t always bad, but when it comes to 1971 the intention was to stop using identitarian catchphrases (“all-Latina, Bronx, skateboarding crew”) to sell clicks, but to instead produce agitation propaganda using language like “fire to the prisons” to open minds toward the possibilities of movement-based organizing against prisons. I find the identity-based media model increasingly frustrating, liberal, and misrepresenting of all of the channels the loose conglomerate of concepts and individuals that comprise Brujas as an entity. 1971 was our way of saying Brujas can manifest their energy and utilize their platform to do whatever the fuck they want to do, and in this case it was to organize for people facing criminalization by providing material resources.

Prison abolition is often treated as an impossible demand. How does Brujas confront the fatalism in today's society?

Well, to be honest, coming out with this project makes me feel more vulnerable to political retaliation by the state. I have been feeling hyper aware of the subversive power BRUJAS is harnessing and only hope that it will be resilient – that all the misogynist and fascist enemies that would easily find cause to destroy what we’ve built so far can’t touch us.

How do you think this impacts the image and feel of Brujas?

DJ Lucas from DarkWorld recently gave an interview to The FADER where he stated “stop asking me what DarkWorld is because I just literally don’t know.” This resonated a lot with me as somebody who has been asked time and time again to define Brujas to strangers on public platforms. Given the fact that most Brujas are femme, cis women, or queer, one could only imagine how much harder it is to create legible definitions to a public that has seen very few women in power in street culture period. I don’t know what Brujas is entirely. I know it means different things to different people. I’ve seen it portrayed and experienced in many different ways, but most importantly for the sake of our art and spaces we hope to create, we have to evaluate what our community impact has been. We have to consider the next creative way to inspire our communities to demand the impossible. 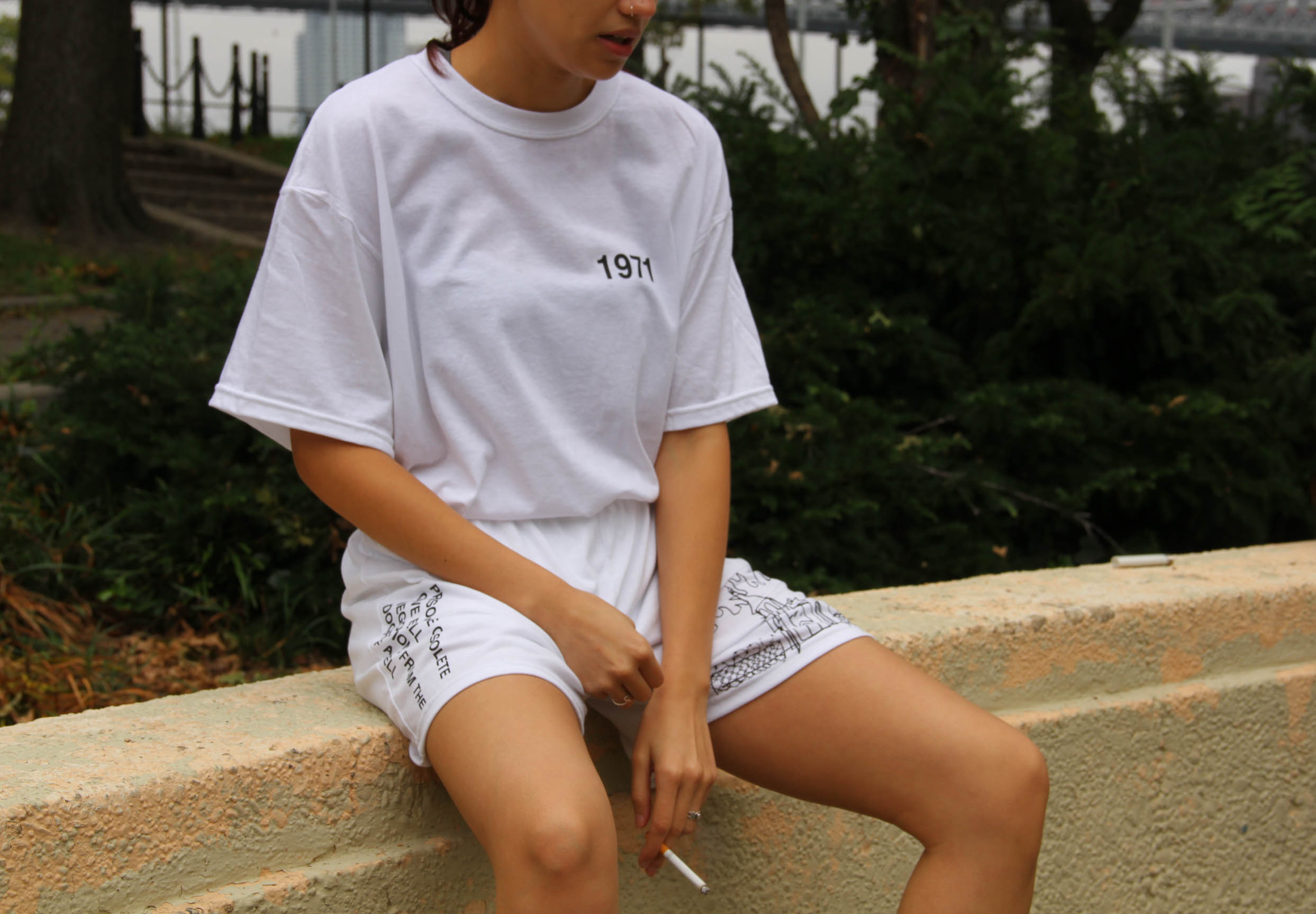 You can check out the 1971 Kickstarter, and help launch the BRUJAS Legal Fund, by pre-ordering the 1971 two-piece.