This Week in #ACAB

Oakland’s Riot Culture – How did the Bay Area become the arena of one of the most intense millennial revolts of the decade?

The February To-Do List – New York Fashion Week, Valentine’s Day parties, and what to watch and listen to. 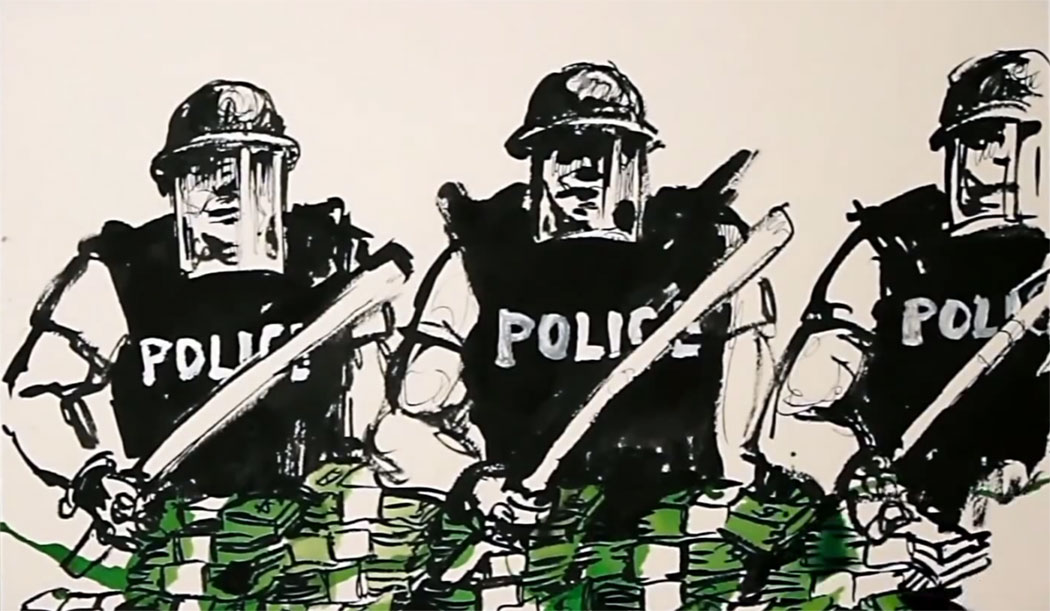 This Week in #ACAB

Hey world. Here is our weekly report on what the police have been up to lately. tl;dr: Cops are killers, what’s new?

Since the high-profile police murders of Mike Brown and Eric Garner last fall, the daily police killings and brutalizing of black and brown people has been getting more attention. Notably, there is now road consensus that FBI’s annual data on “justifiable homicides” (which hovers around 400 a year) is wildly inaccurate, and that the real number is at least 1106 murders in 2014. Up until recently, there hasn’t been any reliable source data on annual police killings. But crowd-sourced initiatives are changing this by compiling data of every police killing reported in local or national media. The numbers are staggering: according to killedbypolice.net, the cops have already killed 127 people in 2015.

NYPD Commissioner Bill Bratton has been thinking up some exceptionally repressive legislation lately. Last week, he received criticism for his plans to to employ a new police unit during protests. The unit would be armed with machine guns and sniper rifles, but Bratton has since backed down on these plans. Around the same time, he expressed support for making “resisting arrest” a felony, and he’s still standing behind that one. This is bad news, not only because resisting arrest is such an arbitrary charge that police can use when they have nothing else on you. But also because it would embolden the most dangerous cops out there. As Vox.com reports,

Resisting arrest charges are used mostly by a small share of cops, many of whom are among the most abusive. [...] Most cops don't bring in many, or any, people for resisting arrest. But a few cops bring in a lot. In New York, in particular [...] 40 percent of resisting-arrest cases are brought in by 5 percent of police officers.

The NYPD officer who stomped on a man’s head during an arrest in July of last year has been indicted. The same is true for NYPD police officer Peter Liang, who shot 28-year-old Akai Gurley as he was walking down the stairwell of his apartment building last November. And the two Philadelphia police officers who beat and severely injured a man with batons two years ago have been charged with brutality, reports Vice. Before anyone starts hooraying this, let’s remember that even if grand juries may sometimes indict cops, they free them 99.9% percent of the time. Fuck cops, and the grand juries who protect them.

Last December, a 24-year-old woman who was arrested for throwing raw meat at a police station in Massachusetts. After her arrest, she reportedly told the police that “God told [her] to feed to the pigs.” As it turns out, her charges have been dropped.

On Wednesday night, a family in Sylmar, California called 911 to ask for help after a 20-year-old man had been stabbed multiple times. When the police showed up, instead of helping the bleeding stabbing victim, they left him on the curb, and later threw him on the hood of a car as if he was the suspect. [via The Free Thought Project]

A public defender in San Francisco was arrested when she refused to let the cops interrogate her client without her present. [via The Anti-Media]

Earlier this week, huge graffiti saying “All Cops Are Bastards” was painted on the walls of the 101 freeway in Hollywood.

At the end of last year, Detroits Youthville community center was adorned with some new graffiti, and the cops were not happy about it. The stencil depicted an angel pointing a handgun at a police officer with hands in the air, and was removed the same day. After an investigation, Detroit police have now arrested a man and a woman, both 19 years old. [via mlive]

Last Friday, February 6, Alabama police officers left an Indian man partially paralyzed after brutally throwing him on the ground. The victim, Sureshbhai Patel, had only been in the country for a few days, and was visiting his son’s family. The son lives in a wealthy, white neighborhood, and one of the neighbors called the cops on him after seeing him walk around outside. When the two police officers arrived, Patel tried to communicate that he didn’t speak English, and pointed to his son’s house. According to the attorney, officers “escalated the encounter and left the man lying bleeding and temporarily paralyzed on the sidewalk.” He is now in the hospital, while one of the officers has been suspended. [via rawstory.com]

FBI put Jeremy Hammond on a secret terrorist watch list, reports The Daily Dot. Hammond was arrested in 2012 for carrying out a number of cyberattacks on federal agencies, police departments, and contractors. He’s currently serving a ten-year sentence.

And for the most non-news #acab story of the week: the principal at  Frederick Douglass Academy in The Bronx is under scrutiny for allowing “racially charged anti-cop poster” to be put up on a wall as part of an art project. NYPD school cops were shocked when they read one of the messages on the poster: “We need justice for Mike Brown and Eric Garner. We can’t let these whites win. Let’s fight for what’s right, because if we don’t, no one will.”

Remember, the job of policing is not that dangerous. Policing is a dirty job, but nobody’s gotta do it.