Free Leonard Peltier! Chauncey Peltier spoke with us about the determined campaign for his father’s release.

Hopelessness in a Lovely Place This month, we explore stories of the different reasons people look for sanctuary and navigate the fact those places aren’t necessarily safe. 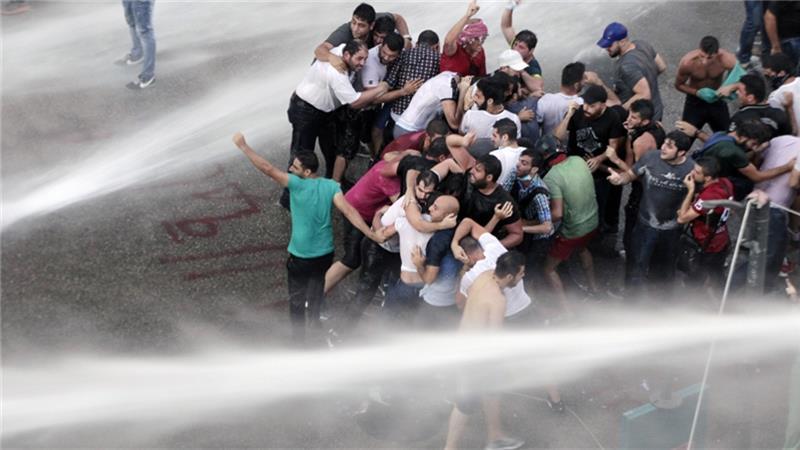 This week, the weather is getting colder, and it looks like cops are bringing a whole new meaning to cuffing season. We got word that Massachusetts police are arresting people with pink handcuffs to celebrate breast cancer awareness, and it doesn’t end there.

In Lebanon, police violently cracked down on protesters demonstrating against government corruption and incompetence. After Lebanon’s #YouStink protests began in July in response to a trash collection crisis that left garbage rotting on the streets, the protests have gone from being about getting trash collected from Beirut’s street to a full-fledged anti-corruption campaign. After Parliament yet again postponed talks aimed at resolving the crisis, hundreds of protesters hit Beirut’s streets on October 8 and started heading towards Parliament. Police then stopped the protesters, spraying tear gas and water cannons at them. For hours the police indiscriminately sprayed people with tear gas and water, even tear gassing themselves at one point. Many Lebanese protesters were left soaked by water cannons despite the fact the country is currently going through a water shortage. Dozens were injured and hospitalised, and at least 45 people were arrested.

It's been 3 hours of cat and mouse, 27 arrested & 30 injured. Cops tear gassing themselves as well #YouStink #Beirut pic.twitter.com/EUdUrWdrcd

On October 1, in Recife, Brazil, Occupy Estelita protesters were marching to protest against the privatization of José Estelita Pier in the city’s center. The protesters want the space turned into a public park. As they were marching, they lifted their banner and accidently knocked off a cop’s cap. Video of the incident shows the officer then lifted his rifle and shot a rubber bullet at protester only a few feet away, wounding the protester’s shoulder. The protesters, angered at this point, regrouped and began chanting “It did not end! But it must end! I want the end of the military police!” as the police retreated.

In Recife, a Brazilian cop shot a rubber bullet at a protester who accidentally knocked his cap off. http://t.co/7Hyj50RS0C

On October 2, during street battles with Kurdish militants, Turkish police killed 24-year-old Hacı Lokman Birlik, the brother-in-law of Peoples' Democratic Party (HDP) deputy Leyla Birlik, shooting him 28 times. Video shows that they then dragged the young man’s body through the streets behind a police vehicle. After first denying it as a Kurdish fabrication, the government later admitted to the cops’ actions but insisted that it was a “routine practice” done when suspects are believed to be suicide bombers.

In yet another addition to the long list of injustices committed by the state of Israel, Israeli police shot a Palestinian teen who was being chased by a right-wing Jewish mob. In response to a series of stabbings and what looks like an oncoming third intifada, a group of anti-Arab protesters gathered in Jerusalem on the night of October 3. Amidst the chants of “Death to Arabs” and the other random attacks on Arabs roaming the streets, 19-year-old Fadi Alloun found himself confronted and chased by a group of about 70 anti-Arab protesters around 4am on October 4. Video of the incident shows Alloun running to police as he was being chased by the mob. People in the anti-Arab mob shouted at the police, demanding that they shoot Alloun because he was a “terrorist.” Israeli cops shot Alloun and only then asked if Alloun stabbed anybody. The Israeli police allege that Alloun stabbed someone before they shot him, but Alloun’s family says that the police are just trying to justify their “cold-blooded murder” of Alloun.

In the USA, police have killed more than 890 people so far this year including an unnamed 45-year-old man who was killed by 2 LAPD officers for breaking their car window with a beer bottle.