Back to Uncle Xhorxh’s When she was 8, Stela Xhiku left Albania and moved into her uncle Xhorxh’s apartment in New Jersey. Two decades later, they are living under the same roof again.

Leaving a Home of Abuse When your tormentor is also your main provider, running away can be a difficult decision. 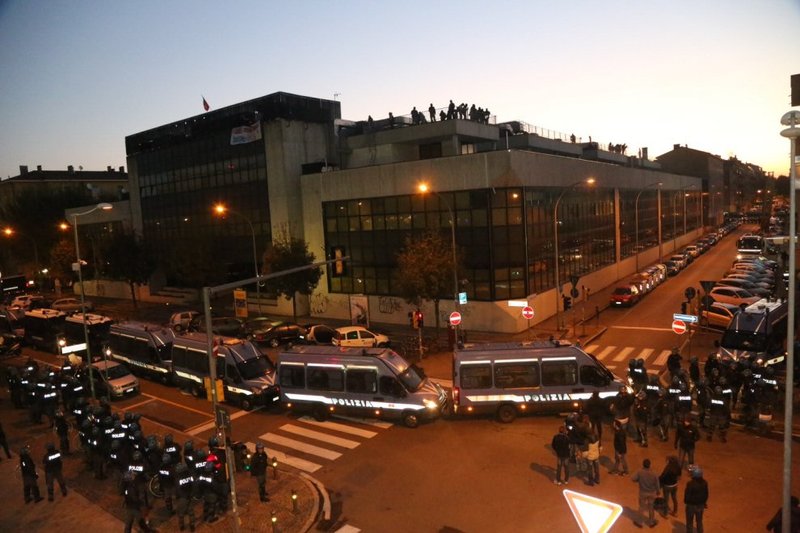 As always, we bring you news from the field on the actions of police forces around the world. This week, from Turkey to Italy to Nicargua, they’re up to no good.

On October 17, Turkish police raided an anarchist space in Beyoğlu known as “InfiAl” after fascist paper Vahdet published a report titled “Anarchists are preparing themselves for civil war.” The report referred to a self-defense workshop being held in the space. Anti-government posters were confiscated, and three people were arrested and charged with insulting President Recep Tayyip Erdoğan.

On October 19, a report by IleriHaber.org revealed that the parents of Berkin Elvan, Sami and Gülsüm Elvan, are being investigated by police for insulting the president and holding a demonstration without permission. Berkin Elvan was a 15-year-old boy who, while on his way to buy bread, was shot in the head with a tear gas canister during the Gezi Park protests in June 2013. After a 269-day coma, Berkin died on March 11, 2014 and became a symbol of the protests. His parents, along with 11 other protesters, are currently being investigated for participating in a protest against a new security law on February 21 at Taksim Square.

On October 21, in the Kayseri province, Turkish police arrested a teenage boy, known by the initials Ü. E., outside an internet cafe for allegedly insulting the president. Luckily, after assuming the boy was 15, the cops took him to court the next day and discovered that he was, in fact, 14 years old and therefore too young to be convicted of that crime under Turkish law.

Also, on October 21, Turkey’s Fox TV news revealed documents from the Tunceli Police Department showing that cops were warned of the Ankara bombing but did nothing to stop it.

#Italy BOLOGNA EVICTION VIDEO: The cop and the strength of the kid. No comments. #ExTelecom https://t.co/SQn75YZuzp pic.twitter.com/pXt9er07wF

On October 20 in Bologna, Italy, riot cops attacked protesters and evicted about 300 people, many of them families with children, from an abandoned former Telecom building. Dozens of families have been squatting in the building since December 2014. During Tuesday’s eviction, many of the squatters made their way to the roof and chanted “No more homeless!” while protesters threw objects at cops. Police still beat and injured at least two squatters, including one woman who had to be carried out on a stretcher. Meanwhile, in Rome on the same day, police shot water cannons at a protest held in solidarity with the squatters. Several protesters were injured and at least one hospitalized.

#Italy: Solidarity rally in #Rome with #ExTelecom in Bologna attacked by water cannons by riot police in Porta Pia. pic.twitter.com/tHHNl30Kgi

On October 17, cops in Nicaragua attacked protesters at the El Limón mine with tear gas and mortars and arrested at least two for blockading the street. The protesters are demanding the reinstatement of three fired union leaders. Protesters then fought back against the police and at least two cops were seen bleeding after being hit by rocks.

In the USA, former NYPD officer Arthur Lomando hacked his ex-girlfriend, Suzanne Bardzell, to death with a machete in New Jersey on October 22 and tried to kill himself by jumping in front of an NYC subway train. Surprisingly, he lived, but his “legs were both amputated above the knee.”

Over 925 people have been killed by cops in the US this year so far, including church drummer Corey Jones who was having car problems and was killed by a plainclothes cop who thought the car was empty and that Jones was carrying a gun.