Introducing The Celibacy Issue: Not Doing It

This week in ACAB: riots break out in Algiers over soccer team's win, police raid Kempton Park in South Africa to shake down Nigerian residents, 65 people in the US have been killed by police. 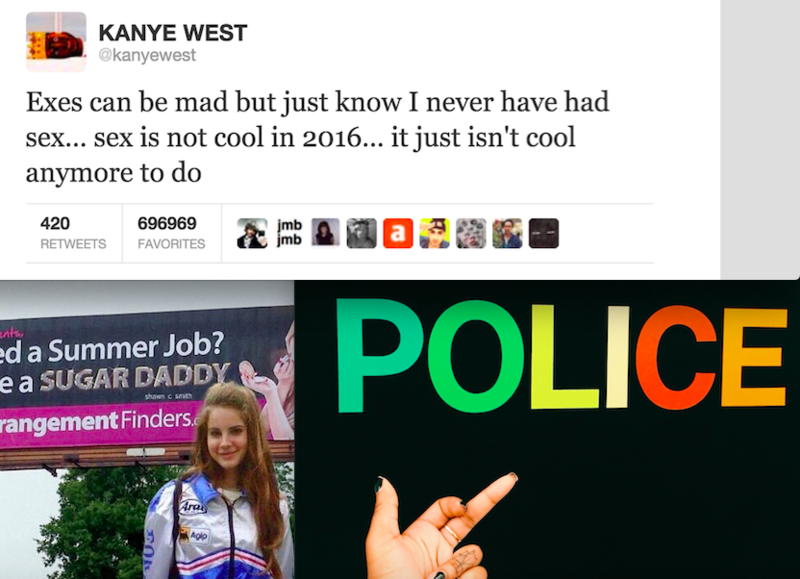 SPF666 describes millennials, affectionately, as the “‘choke me, daddy’ generation,” and I haven’t been able to get the phrase out of my mind. To think about millennials as a sexual subjectivity as well as an economic class seems appropriate, even if I dare not use words like “generation” anymore. Academics and activists still refer to feminisms as “waves” and remember them for their demands like white women’s right to vote or equal pay, as well as how they trampled all over whole swaths of people. I’m not sure if this new millennial sexuality can be described as yet another wave, but if that’s how we’re taught to remember people and all their politics of different eras, I want to remember Instagram hoes and slutty art girls putting Paypal links in bio as a part of this evolution, too.

Twenty years from now, I might remember the choke me, daddy generation as having been about second wave issues, alongside third wave sex. This might seem contradictory, because after all, second wave notions of sexuality were like, “fuck the father and his values.” It was a rejection of ‘penetrative intercourse’ as patriarchal and male-dominated sex – a yawn-worthy assertion that still belongs to that sect of feminists who just can’t get over that some girls have dicks. But in today’s context, the second wave’s age-old “wages for housework”, has become wages for emotional labor, and further, pay me to be myself. Scrolling through Instagram and Tumblr, it’s more clear how today’s paradigm is a continuation of the third wave, which gave us the expansiveness of what we consider sex acts to begin with. Today, we see this in the proliferation of a lifestyle that isn’t totally sold on that monogamy shit; is queer as in fuck you; knows that trans women are women and thinks all work that women do is sex work; sees oppression and privilege across race, class, sex as interlocking systems of domination; and understands that dildos, power-play, and BDSM do not reify patriarchy, or at least knows that it’s not that simple. Third wave attempted to go beyond second wave towards breaking apart the gender binary, proposing that liberation might come about through the acceptance of all forms of consensual sex.

But, being all third wave about it, and staying positive about sex feels increasingly tiring, like more unpaid work, work most people I know can’t afford to do. So, instead, maybe I’ll remember these years as a time when very few of my friends were actually having sex. Many people who I love who sell sex or used to, say that they feel like they can never stop performing, and can’t have sex in other contexts anymore. Most people I hang out with treat “sex positivity” as if it were an out-of-season jacket. Go home, and change, I just can’t be seen with you wearing last season’s sexual discourse. We know that more sex is not better sex, and there’s probably not such a thing as radical sex. Speaking of discourse markets, somebody on Twitter said, “being sexual is so much more important than having sex.” But to be honest, this kind of distinct knowledge production around sexuality still feels performative and exhausting. You would still have to pay me to think about it that way.

Somehow, choke me feels appealing to me because it takes third wave’s proposal that submission and domination are desirable positions, and also puts forth the idea of self-negation and sex-negativity as possible horizons. It sees sex positivity as on par with self-help, and reveals conceptions of being a strong individual as obviously shallow and false. While the second wave’s rejection of men and fathers may have be rooted in a kind of bogus essentialism, it also wasn’t facing the same kind of hopeless precarity that marginalized women and queers are experiencing today. Years later, choke me, daddy might be an admittance that not everyone can afford to reject daddy, at least not economically.

In high school, I wanted to do it with this guy, and we did. When it was over, he kept sucking his teeth and talking about how I had just lost my virginity, and all I could do was roll my eyes because I’d been sleeping with girls for a while but he didn’t think that counted. When I think back on it, I don’t consider what he and I did sex at all either.

In the process of coming into my queerness, I tried to reexamine all of my early experiences to figure out what was sex and what wasn’t, not unlike when a philosophy professor at my public university assigned a reading with a vivid and beautifully articulated vomit-play scene, and asked us if we thought it was a sex act. Duh. Trying to figure out what is sex is much more exciting than figuring out what is trauma. The two are so muddled for me that I can’t remember or do not wish to return to moments when I knew exactly what sex was and didn’t want it, because clarity didn’t protect me.

This is The Celibacy Issue where we realize we never did The Sex Issue because we’d rather talk about not-sex. We’ll be exploring how our desires don’t exist in a vacuum; contend with our bodies and what they need to feel satisfied when we are alone with no one to avoid but ourselves; realize we haven’t done it in a while, and then forget what it is at all.