Cops Light Street Vendor On Fire in Dhaka, Bangladesh After He Refused to Pay Bribe

Step 1: Start Stewing How to break up when you’re terrible at breaking up

Sucka Free In Micah’s new music video, you get a tour of Oakland’s radical history of resistance and Black Power. 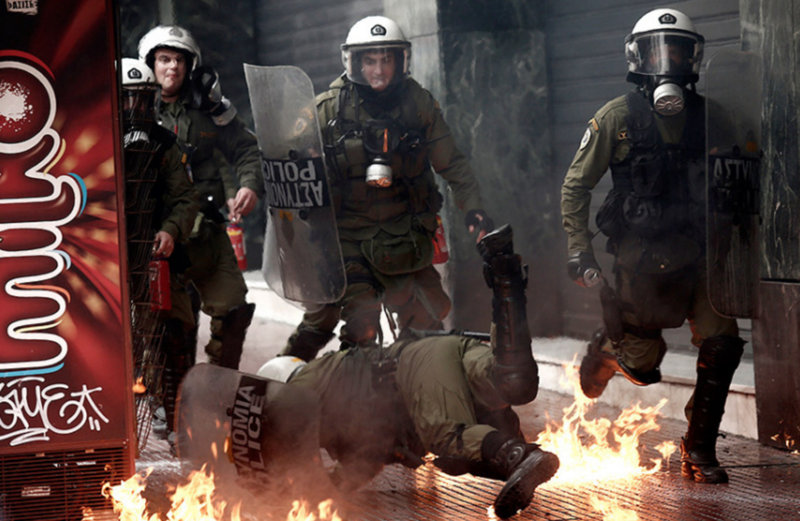 Riot police falls down at anti-austerity strike in Athens

On February 4 in Rome, the housing rights group Action Diritti in Movimento decided to occupy a vacant housing block at Viale Ostiense 333 with families who had been evicted from their homes a week earlier. The occupation lasted a few hours before Italy’s police showed up to intimidate and remove the squatters. Cops soon arrived with trucks and riot gear, ordered the protesters to vacate the premises, and began attacking the activists. It wasn’t long before cops began beating protesters and spraying water cannons at them. Several protesters were injured from beatings to the head. Protesters defended themselves, throwing rocks and bottles at police, using trash bins as barricades, and allegedly injuring two cops. Of the hundreds of protesters there, police say they have identified 50 who fought back and are now keeping a close watch on them.

In Athens, Greece on February 4, thousands of Greeks participated in an anti-austerity general strike, shutting down highways, trains, ferries, and airports throughout the city. Greece’s notoriously brutal and fascist-friendly police were out in riot gear, but luckily, the black bloc was also present. Only days earlier, cops conducted an anti-migrant raid in Victoria Square, Athens and attacked citizens and journalists who tried to document it. As crowds of people marched and farmers blocked access to the airport with their tractors, police shot tear gas and stun grenades at protesters. Black-clad youth then made rocks and Molotov cocktails rain down on cops. By the end of the strike, police had captured at least two protesters. Later on after the strike, in the city of Volos, anarchists successfully took food from a supermarket and passed it out to people in need.

In Dhaka, Bangladesh on February 3, 45-year-old Babul Matubbar was selling tea at his stall when local snitch Delowar Hossain arrived and tried to extract a bribe on behalf of the police. A month earlier, cops had arrested Matubbar on false charges and was only released after his family paid a bribe. Apparently, Matubbar had been complaining about local drug dealers’ activities, and the police, who routinely got bribes from the dealers, didn’t like this. Hossain, accompanied by at least three cops, tried to pull Matubbar out of his stall as he was pouring kerosene into his stove. Some of the kerosene had already fell on Matubbar as he struggled with the informant and cops. One cop, in an attempt to beat Matubbar, hit the stove, which then fell over and lit Matubbar on fire. At first the cops simply fled the scene but later came back and took Matubbar to the police station instead of the hospital. More than two-and-a-half hours later, he was finally taken to a hospital, but it was too late by then. Matubbar died the next day with 90% burns on his body. Matubbar’s family says that when they went to file a report on the incident at the police station, the cops refused to record the case against their fellow officers. Instead, they tried to get the family to file a murder case against Hossain and local drug dealers. Despite five cops being under investigation now, police claim that no cops were involved in the incident and that Matubbar was a drug dealer who burned himself while trying to run away from a police informant.

Over 90 people have been killed by the USA’s cops so far this year, including 37-year-old Bruce Kelley in Wilkinsburg, Pennsylvania on January 31. Kelley and his father were drinking in a public gazebo when cops came and attempted to arrest them. Kelley allegedly resisted and ran. Cops sicced a dog on Kelley and then shot him for stabbing the dog that was attacking him. Local media then mourned the dead dog while demonizing Kelley, and the executive director of the local police review board blamed Kelley for his own death.