The Sound of Keerat Kaur

Gaby and I lived together after a breakup, it was complicated to say the least. 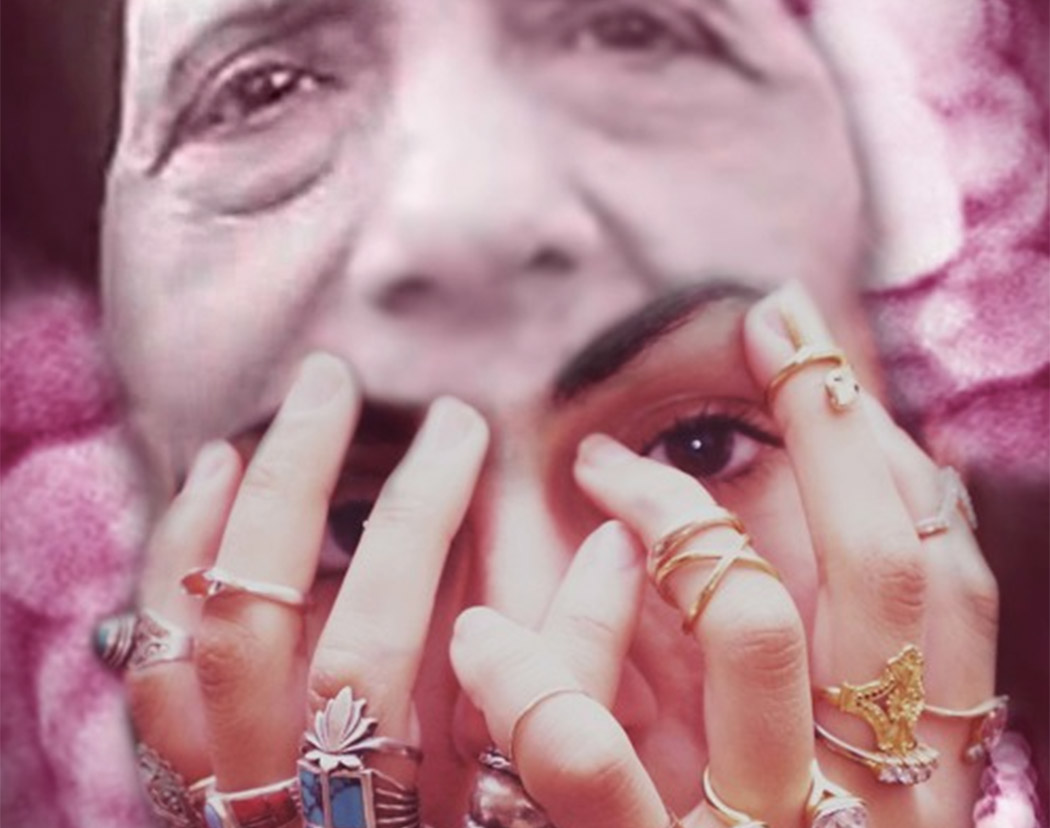 The Sound of Keerat Kaur

Keerat Kaur draws from Indic philosophies of space and memory, and constructs her own version of Sikh women’s self-knowledge and storytelling.

Whoever loves Drake’s “Know Yourself” – at once an anthem of valid self-congratulation and a tribute to friendships striving for exclusivity – should listen to Keerat Kaur’s spiritual, shape-shifting rendition of it. The singer waves her hands as she holds burning incense sticks, “Pray the real live forever, man / Forever, man / Pray the fakes get exposed” dwelling dreamlike on each O. Kaur’s drawling sound brings to mind Surinder Kaur, a foundational Punjabi folk singer. In her preoccupation with the macabre, she visits the cultural icon’s classical lyricism, rooted in soundscapes intimately familiar to Sikh elders.

The first time I heard Surinder Kaur’s voice was when I showed my nani (maternal grandmother) how to access YouTube. Her reading glasses were carelessly perched near the tip of her pierced nose, the dull gold stud bleakly reflecting the light emanating from the phone screen. She craned her head up stiffly, her gaze uncomfortably low. “Let me show you an example, is there any song or music video you want to watch or listen to?” I asked. “Yes, play Surinder Kaur’s songs.”

It took some time, perhaps a couple of minutes, until we discovered a slowly buffering “Mainu Heere Heere Aakhe” (He Calls Me Heere) by Surinder Kaur. The song poured out of my speakers like milk. Fat and lumpy in its occasional buzzing, balmy and patient when softer, it pleaded for better sound quality this phone was not built to offer. Still, you could hear what made Surinder Kaur’s voice so memorable. It is unpretentious and whole, high-pitched and easy, replicating the taken-for-granted artistry of sleep songs or night lullabies. You could miss the lilting technique if you didn’t prick your ears at the right moments.

In the digital anonymity of the internet, communities of fans and followers chance upon new content serendipitously. Sounds especially, often start to structure our lives and thoughts as they play while we work on our assignments, or think about the rain, or the next flight back home. Many racialized people rely on the internet to speak to their inherited nostalgia for folk artistry, often through a growing interest in musical stimuli by emerging artists of color. On a night like any other, I discovered Keerat Kaur’s Soundcloud profile, stumbling upon her rendition of Surinder Kaur’s “Mainu Heere Heere Akhe” (He Calls Me Heere). The Toronto-based artist, illustrator and University of Toronto Masters of Architecture student uses music to evoke the Sikh feminine principle, burgeoning the politicized aesthetic interventions launched by women of color in the underground art communities of Toronto, including South Asian artists like actress and filmmaker Kiran Rai, filmmaker Rakhi Mutta and spoken word poet Rupi Kaur to name a few. Her version of “Mainu Heere Heere Akhe” (He Calls Me Heere) roots itself in the tape-recorded, creamy texture of Punjabi folk sounds. With a looming vibrato, she reincarnates Sikh women's homosocial domestic spaces that have historically cultivated a rare sound of the homemakers, the wedded spirits, the daughters. She emulates Heer, the tragic female lover who narrates to her girlfriends the ways in which her admirer expresses his affection in rural spaces of feminized gathering: “nadiye” (lake), “khoohe” (well), “baage” (garden), all sites of flirtation, her tonal levity seeks to transform into playful rejection, longing and return. Indigenous instrumentals – the sparkling tumbi, the pleading, pensive dhadd, the periodic, foot-tapping chimta – playing in the background recall the women’s sangeet (song and dance ceremony) prior to weddings. 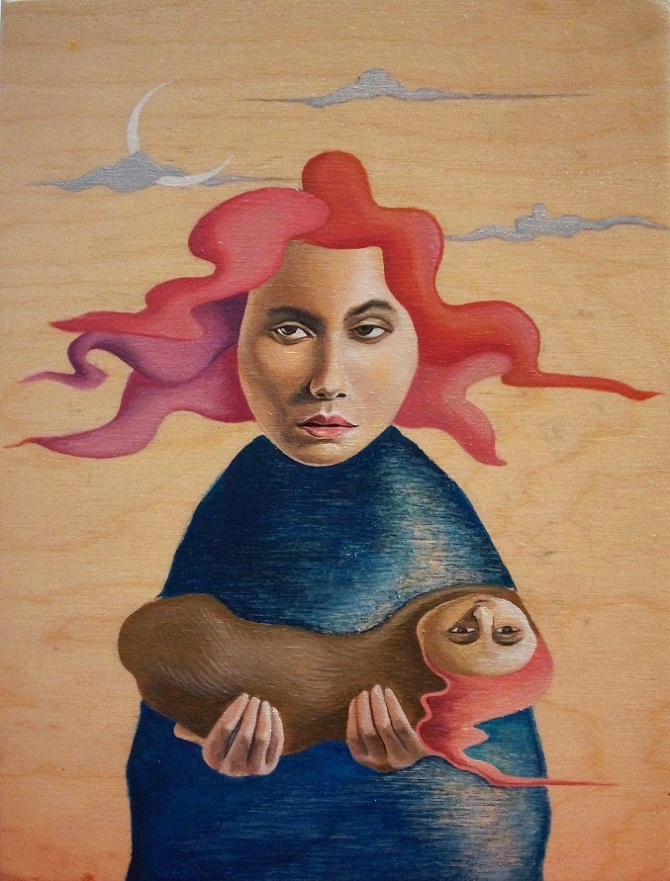 On hearing Kaur’s voice meander around smoothly elongated notes, I think about what it means for an artist to softly place their presence in the work of a cultural icon. Her mirroring of Surinder Kaur’s warm  texture constructs a unique revision, one that is ghoulish and willowy, patient and reminiscent. Perhaps, the impending sense of dread and distance characteristic to her tracks indulges a silenced aspect of Dhrupad Gurbani Kirtan in holy, classical Sikh hymns: emotional solitude, still and in mourning. Flitting in and out of the melancholia starched in Sikh women’s celebratory chants, Kaur’s auditory feminine seems to honour a distinct aural nostalgia among the diasporic elderly and what often follows: the sweet, inherited emptiness of desi youth.

As I listen to Kaur, I think about migrant Sikh women’s intergenerational transfer of stories, of tales about loved ones, about the state, about desire, disappointment, mustard oil, Canadian immigration, floral dupattas, coconut oil, secret transactions, loud Godrej cupboards, and stained passport photos with knowing, lost expressions. Women of color, placed by the surveilling imagination of white colonial voyeurism in their supposed mythologized homelands, are often framed behind closed doors, rarely creating, if only ever repeating – tasks, labour and activity that silences, and puts others to rest, that becomes, but never makes. What if, Kaur’s tribute seems to ask, the ancestral songs Sikh women sing about their men are really unspoken subtexts, even survival script, created for one another?

Kaur’s play on the divine and the foreboding makes less distorted for me my nani’s admiration for Surinder Kaur’s haunting kitchen-woman voice. It reminds me of the power in young artists’ ability to trace their footsteps through their parent’s chanting, or their grandparents’ aching hum. On the unforeseen day that we discovered Surinder Kaur on YouTube, nani’s face was lit like a dark moon by the telephonic spotlight. She listened and experienced her icon’s aurality with her waving toes, her resting soles, the discerning tip of her pierced nose. It now makes me think about Kaur’s voice, and what it does to me, lost and in remembrance of something. I don’t quite know what.

Check out Keerat Kaur’s visual art on keerat-kaur.com, her sound on Soundcloud and her words on Twitter. 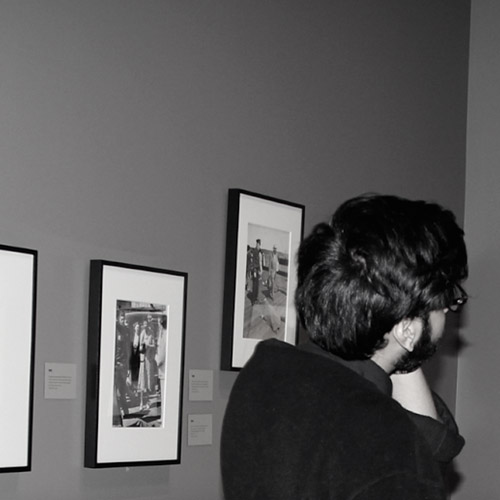 Aaditya Aggarwal is an aspiring filmmaker and a contributing writer to The New Inquiry and the Zubaan Blog, among other publications, as well as a former co-editor of Camera Stylo, a University of Toronto publication. He is a student of Film and South Asian Studies.