The Downward Spiral You can feel the seams ripping everywhere between us. 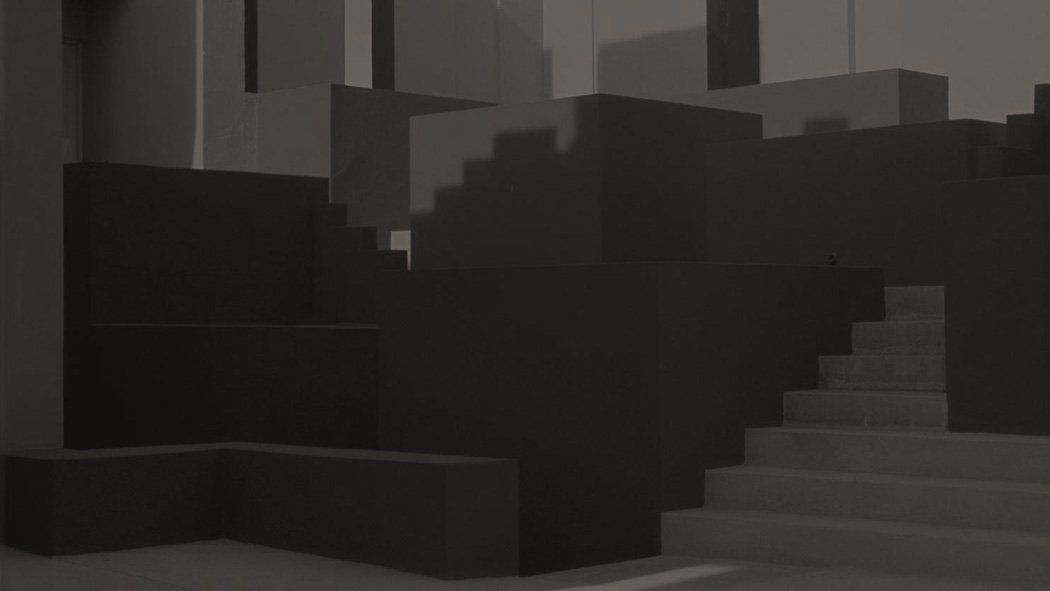 What would it mean to anchor our experiences in a politics of home that refuses patterns of assimilation, trauma, and self-loathing? Catherine Chen reviews the new anthology Go Home!, a collaboration by Asian Americans Writers’ Workshop and Feminist Press.

In the editor’s note to Go Home!, novelist Rowan Hisayo Buchanan attributes the difficulty of defining home to the plurality of the Asian diasporic experience. Home is a concept of contradictions. A place real yet inaccessible. A place imaginatively sustained yet yoked to the particular memory of a smell, touch, or image. As Buchanan notes, “The world presents ever-increasing ways in which we can be homed and unhomed.” Yearning for home is a kind of home. It is also to recognize the untapped possibilities that presently make up a home.

The unrealized home, the wayward home: What is it? Where is it? A collaboration with the Asian American Writers’ Workshop and Feminist Press, Go Home! is a mixed-genre anthology of essays, poetry, and fiction that features established and emerging writers who not only answer these questions but also seek responses to a much thornier set of questions about the political and emotional stakes of how it is we come to name and build our homes.

When I speak of “us” and “we,” who am I referring to? We are Asian, which is to say, we are of mixed race origins, we are the children of immigrants, we are immigrants, we are adoptees. We are youthful, middle-aged, and elderly. We speak many languages, of which English may or may not be one. We have a relationship to America, or to whiteness. We have and do not have class privilege. We is a plural voice that is necessarily fractured, diverse, and anti-monolithic, and it feels both cathartic and frustrating to collectively organize behind the sentiment that there is a we. “We” builds affinity. “We” is a powerful fiction that designates a shared reality. I say fiction because what draws you into the oceanic feeling of being one amongst many is itself a shifting kind of intimacy. When I was in school, for instance, I realized that the “we” of academic discourse is loaded with an assumed kinship that is also rooted in whiteness. I understood its allure even as I also knew that by questioning its social fabric I would be banished from this “we.” My racialized body was seen as too disorienting, too loudly present, from the rest of us. 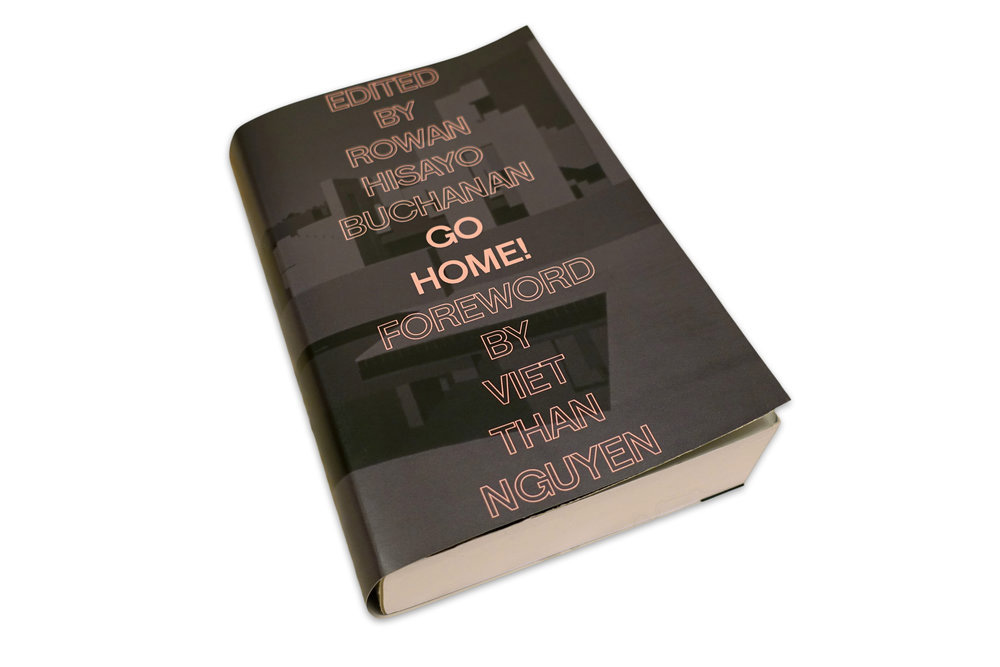 Go Home! presents an array of stories and experiences that examine the relationships we form with our homes, that is, our relationship to belonging. The anthology’s function is to balance the collective voice with these straining voices of the individual, to curate stories and characters that inform a politics even when their contents might not overlap. Anthologies bridge those gaps in knowledge; they model what it is like to participate in the difficult work of community building, which is a process of investing in one another in spite of our professed differences and conflicts.

Belonging is every bit as violent as it is beautiful, as Alice Sola Kim’s contribution to the anthology illustrates. The short story “Mothers, Lock Up Your Daughters Because They Are Terrifying” follows Ronnie, Caroline, and Mini who bond at a meet-up for Korean adoptees and decide to summon the spirit of the biological mother they have never known. The three girls have an idea of who their “real mom” is. She’s “the one who looks like you, the one who has to love you because she grew you from her own body, the one who hates you so much that she dumped you in the garbage for white people to pick up and dust off.” With these expectations, Mom arrives – somewhat. First of all, she doesn’t quite look like anyone expects. Mom is a disembodied voice who speaks by entering the mouth of the girl who has addressed her:

MY DAUGHTERS
MY GIRLS
MY MY MINE MINE

Mom is loud, abrasive, and possessive. Her language is stiff because it is entirely qualified by her maternal authority, which affects the psychological space she comes to take up in each of the girls. She is as loving as she is cruel. She knows how to pick apart her daughters who desperately crave her approval: Caroline is too fat for ballet; Mini needs to eat healthier foods; Ronnie is shamed into revealing a secret that eventually unleashes Mom’s rage against them all. Though Mom feels misunderstood by them, she is also the primary source of conflict. Kim locates the violence of a mother here, in emotional coercion and manipulation.

Honey, said Mom, You Won’t Let Me Get To Know You. Ronnie, Don’t You Love Me? Don’t You Like The Food I Make For You? Don’t You Miss Your Mother?

Of the girls, Ronnie is the one who chooses to accept the vision of love Mom offers. Her heavy experience of guilt, which comes from having feelings for her adopted brother, is lessened by her subliminal acceptance of Mom. In choosing this dynamic, she and Mom merge, but what’s troubling about their unity is the blurring of boundaries between the narrator’s collective voice and the role you’ve played in all of this. What begins as playful inclusion of you, the reader, in the action of the story ends in moral ambiguity. While it is clear Mom has drastically changed Ronnie, less certain is your involvement in their transformation. “Who are we?” the narrator asks. “We are Ronnie and someone standing behind her, with hands on my shoulders, a voice in her ear, and sometimes we are someone standing inside her, with feet in her shoes, moving her around.” And yet you don’t know why, and you don’t know if it’s what you really want.

Complicity: how will you reveal yourself? Complicity: the inherited trauma of whiteness. To desire whiteness as if there is no other available lens for looking at and understanding the world. To desire the signifers of a successful life, which is almost always a white, American life – whether it’s having money, a nickname, or easy social graces. As Wo Chan, a poet and performance artist, writes in the poem “what do i make of my face / except,”

when i was 9
i watched aladdin and thought, after money
i wish for whiteness

There is an understanding that what’s being grieved is the idea that in capitulating to your desire you cease to be anything else. That the limitations of your desire parallels the limits of your capacity for experiencing human needs and wants. In making space for grievance, in naming it, Chan ritualizes the process of what could happen next, what naming this agency could activate in the spaces we have not yet all entered. The line “& i changed i learned i could keep changing” acknowledges the pain of what will never love you in return, the capacity to sacrifice oneself, and the desire to remake these harrowing conditions. As Edwidge Danticat writes in Create Dangerously: The Immigrant Artist at Work, “The immigrant artist shares with all other artists the desire to interpret and possibly remake his or her own world.” Creating is a struggle. It is the willingness to engage that which is upsetting, unsettling, and horrific in our lives. She adds: “So though we may not be creating as dangerously as our forebears – though we are not risking torture, beatings, execution, though exile does not threaten us into perpetual silence – still, while we are at work bodies are littering the streets somewhere.”

The book’s title works on two levels. “Go home!” speaks to real political bigotry that drives extrajudicial forms of surveillance, abjection, and deportation. At the same time, “go home!” is the reductive way many of us experience the political awakening of identity, not as something consensually negotiated but as something thrust upon us. I know I am still working on understanding for myself what it would mean to anchor my experiences in a politics of home that refuses patterns of assimilation, trauma, and self-loathing. I am still learning how to ask for intimacy, how to admit that I, too, have felt lost or lonely. “Each time I met one,” Alexander Chee writes in his essay, “Release,” of mixed race gay Asian men, “it was like we were from a homeland that had never existed, but that if we collected enough of each other, maybe it would. But we never said this, or, I never did, it was just something I felt.”

In reality, the home of our making persists in its transience, its excess leisure, its crass sincerity. It lives undetected, out of reach, right before us. Movement is a way forward, and it is an account of where we have presently gathered. We turn toward the revolutionary impulse. As the poet Marilyn Chin writes in “For Mitsuye Yamada on Her 90th Birthday,”

Auntie Mitsuye
No more redress, no more reparations, no worries about
legacy
Let’s live raunchily and have the last laugh 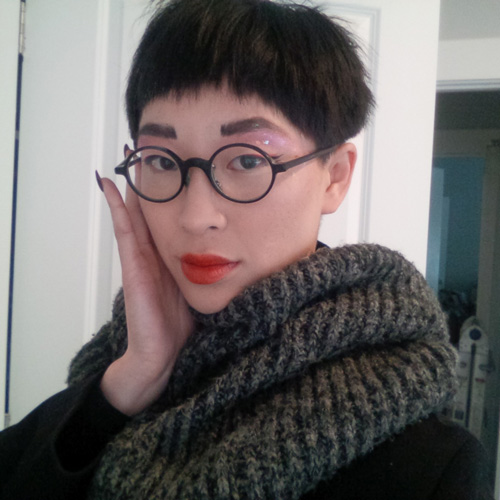 Catherine Chen is a poet and performer living in Atlanta.