Get LOCA Listen to DJ Bebe's barbed wire contribution to our mix series.

employees of the month A round up of retail workers flipping the bird to the cops. 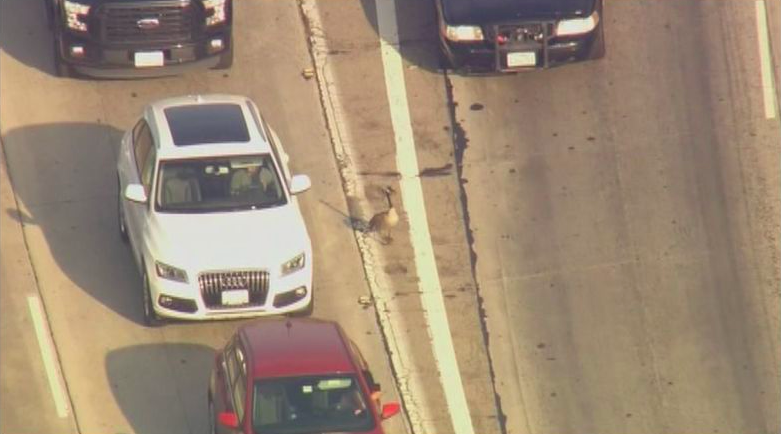 In other ACAB news: Police murdered Korryn Gaines, an ex-cop threatened to shoot up a precinct, a goose took the streets...

It’s been two years since some brave young people in Ferguson stood up and said “No more!” after the killing of Mike Brown. And spending these cool summer nights in Abolition Square with the #ShutDownCityHallNYC crew has me all up in my feelings lately. With occupations going down in LA and Chicago, too, I can almost feel the rebellion in the air.

Police are still killing people. They murdered Korryn Gaines this month and shot her 5-year-old son as he ran for cover. Full of love for life and for black people, Korryn chose to defend herself and her child from armed thugs breaking down her door over traffic tickets. May she forever be remembered as a freedom fighter!

But there have still been some small acts of rebellion against the cops lately.

We got the current and former top cops of New York City desperately trying to do damage control of their reputations. One day after Millions March NYC started their occupation of City Hall Park, one of their first demands was met when NYPD Commissioner Bill Bratton announced he would be resigning by September. Mayor Bill de Blasio tried to front and say that Bratton’s resignation “110 percent had nothing to do with” the protest, but Bratton later went on NY1 talking reckless about the activists, referring to them as “cop-haters by and large.” Former NYPD Commissioner Ray Kelly weighed in too and called the protesters “ridiculous” and “myopic.” He then ridiculously and myopically claimed that it’s the police who truly think that black lives matter. To be fair, Kelly was probably salty that even the New York Daily News finally admitted that Kelly’s beloved racist policy of Stop-and-Frisk is bullshit. Eric Garner’s daughter Erica probably read him the best. “Ray Kelly is scared, as he should be. Scared that a new day is on the horizon,” she said. “Black Lives Matter is civilizing America. We should salute them.”

The NYPD has been getting trolled by someone with a police radio. Someone with a knowledge of police lingo taunted the police with yodels and “yo’ momma” jokes and threatened a Manhattan NYPD captain. A few days later, the troll struck again, stating that he was standing right next to an NYPD van and challenging the NYPD to come find him. The cops ain’t found him yet either.

A former NYPD school safety agent called up a Brooklyn precinct and told cops: “I’m going to shoot you all up in an hour – good luck.” He got bagged later that day but was also bailed out. Hours later, a guy ran up in the precinct and “menaced officers” with a large kitchen knife. In East Flatbush, someone pointed a laser at an NYPD helicopter. And on Bushwick Avenue, transit cops had four radios and a bag of tools taken from two vehicles. Cops still haven’t caught whoever pointed the laser or took the equipment. They are not playing around in BK!

Cops in Boston also got jacked for one of their cars but got it back later the same day. The day before the carjacking, hundreds of people marched through Boston’s streets demanding the abolition of prisons and police.

Out in California, a goose shut it down while being followed by police. Traffic came to a standstill on the 5 Freeway as the goose waddled on the southbound side. Cops, unable to beat and arrest away the one-bird blockade, had no choice but to trail slowly behind the goose.

Chicago cops claim that three gangs from the city’s west side have recently decided to team up, arm each other, and fight against the police in response to the killing of Paul O’ Neal by Chicago PD late last month. The gangs allegedly even have a “sniper in place.” Chicago cops have supposedly been advised to “limit interactions and visibility.” So they appear pretty shook. Uniting the hood probably would do that to cops. But police have been known to make up fake threats like these before. Nonetheless, shit got very real when protesters in Chicago shut down Chicago Police Superintendent Eddie Johnson’s news conference regarding Paul O’Neal’s death though.

You can support acts of rebellion with donations to #DecolonizeLACityHall in Los Angeles, #FreedomSquare in Chicago, and #ShutDownCityHallNYC.