Tabs: The Floating Prison, Oldest Man Ever, and Rave of Thrones. 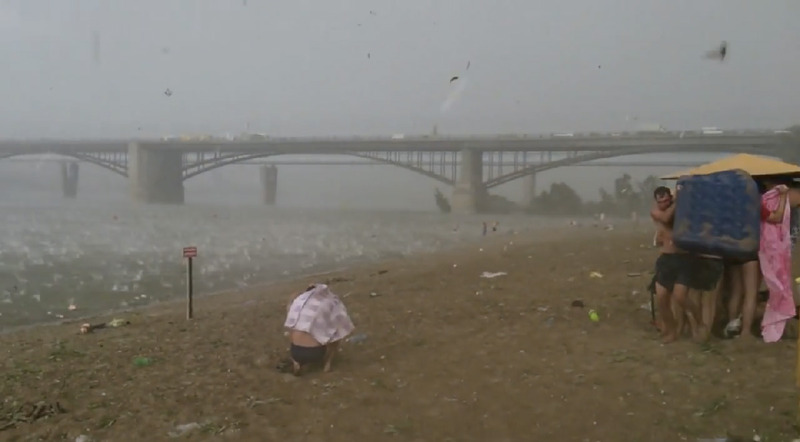 Health Goth, the World's Blackest Material, and an Apocalypse Hailstorm.

I spent most of this weekend bummed that more people didn't think my meme about #healthgoth – #healthgarth – was funny. Here is a bit of high-brow on the new anti-nostalgic joke-not-joke trend.

Speaking of Goth, the blackest known material has been developed for calibrating space cameras, and I'm pretty sure it won't come in "hoodie" for a while.

I'll probably be going to my first on-broadway musical in a dozen years soon, as I've just read about the American Psycho production currently being scheduled. Here is my suggestion for the big solo number.

Hmm. People who always seem worry about climate change reportedly use more electricity than any other demographic. In other news, a similar inverse correlation has been found in people who complain about there not being any toilet paper left in the bathroom.

Speaking of the apocalypse, check out what happened to this sunny Russian beach after a mega hailstorm rolled in.

This should get interesting: U.S. Attourney General Eric Holder speaks out against the football team name only the world's shittiest people would ever defend.

Troubling news surfaced today when the woman who accused Conor Oberst (of Bright Eyes fame) of raping her completely retracted her accusation and apologized. From her apology:

I made up those lies about him to get attention while I was going through a difficult period in my life and trying to cope with my son’s illness. [...] I realize that my actions were wrong and could undermine the claims of actual sexual assault victims and for that I also apologize.

It's been known for some time that each human body hosts more foreign microbes than human cells, but a new report suggests that they may actually comprise a non-human organ which we could not survive without. This leads me to suspect that an organ could be just about anything, for instance my cell phone.

More than 160 golf courses closed their gates for the last time in 2013, sparking a fascinating conversation about whether White America's most boring/exclusive pastime can survive without stupid levels of disposable income among middle-class Americans.

Maybe no one cares about this but me, but MetaFilter founder Matt Haughey discusses the plight of small companies who rely on advertizing revenue in this 15-year retrospective.

The FCC is considering giving the president the right to text every cell phone in America, to which I say "please unsubscribe me from this list".

And hey, student debt relief companies are reportedly predatory – you don't say. A related weird finance story: the Bank of America twitter once stepped into a conversation about the bank being held by two twitter bots.

Um, there is a real-life Peter Griffin, just in case you wanted to know.

I don't smoke weed, so these faux weed bag magnets from the captivating webseries High Maintenance we covered a few months ago made me look.

In health news, a new study finds that just 20 minutes of light excercise three times a week could be enough to significantly reduce your risk of Alzheimer's, which despite it's low overhead, still means I'm doomed. I'm stuck in my rolling chair. Don't worry about me. Save yourselves.

I couldn't wait for throwback thursday to share this fascinating essay about how the C.I.A. financed abstract art during the cold war. Speaking of American Exceptionalism: Kanye West has some protips on avoiding people at airports. And if you're headed to Taipei, you should probably leave your scooter at home.

I love the new "8-bit philosophy" videos from my boy at Thug Notes, like this one about cyborgs and Kant. Hmm. Also. Google street view is moving indoors.

If you had the slightest doubt that the internet has completely reshaped popular culture, the teenage metal band from Brooklyn that has been all over the internet this past year just signed a $1.8 Million dollar record deal with Sony.

Brace yourself for the real news:

The U.S. military is testing a combat-ready robot for the first time since the Terminator franchise. Oh, and they've also developed self-guided tracker bullets.

And after over a year of espionage drama with the U.S., German Chancellor Angela Merkel may voluntarily step down, reportedly (by no one) insisiting "I can't even with this shit".