A Squat at the End of a World. The Albany Bulb was a landfill-turned-squatted community, rebel artist enclave, and autonomous zone, north of Berkeley, CA. 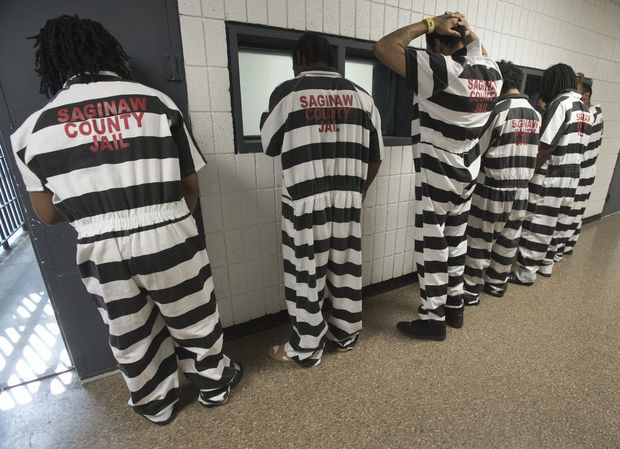 Black-and-white stripes is the new orange.

Aquafina made a mix for Black Scale and it's perfect almost-weekend work music.

Here’s a video of a robot learning to hobble after one of its legs stops functioning. If you can program a robot to walk, you’d think teaching it to hop wouldn't be that crazy. But hobbling requires a completely different set of skills than walking. Researchers at Sorbonne University in Paris taught this hexapod bot to overcome a broken leg by giving it access to a database of almost 13,000 different ways to move around. After 2 minutes of trial-and-error, the robot starts to hobble in a straight line. So I guess we’re one step closer to letting robots take over.

Russia apparently lost contact with a satellite full of geckos and it sounds too good to be true. When the descendants of these geckos come back in 2 million years to reconnect with Mother Earth and imprison all the humans, remember that we predicted it first.

Ahahaa look at those silly naked college bros, robbing a burger shack, aren’t they funny. Don’t try this if you don’t look like them though, they’ll probably throw you in jail.

Since the Malaysia Airline flight was shot down, it seems at least one plane crash per day has made the news: first the TransAsia Airways plane on Penghu killing 48 people, and then the Air Algerie flight which probably crashed after going missing in Sahara. Car crashes are so commonplace that they’re a statistic more than a tragedy, with car crash victims being seen as collateral damage of civilization. Perhaps we’re starting to warm up to the same being true for plane crashes. Would now be a good time to start working on that anarchist-owned zeppelin company?

“Orange Is the New Black” made orange so cool that at least one sheriff decided to bring the old striped jumpsuits back.

“As you see on shows on television, like ‘Orange Is The New Black,’ some people think it’s cool to look like an inmate of the Saginaw County Jail with wearing all-orange jumpsuits out at the mall or in public,” Federspiel says. “It’s a concern because we do have our inmates out sometimes doing work in the public, and I don't want anyone to confuse them or have them walk away. We decided that the black-and-white stripes would be the best way to go because it signifies ‘jail inmate,’ and I don’t see people out there wanting to wear black-and-white stripes.”

So black-and-white is the new orange? OK, got it.

My tl;dr of biopower is this: while sovereign (or “the king’s”) power is about ‘killing or letting live’, biopower is about ‘making live or letting die’. The biopolitical, democratic State receives its legitimacy from its promise to protect life, cherish life, improve life, and from its ‘humanity’ — it doesn’t kill, except the enemy, which is defined as that which threatens this promise to life. Needless to say, death becomes hella complicated under the biopolitical State (equally complicated is who comes to be classified as the “enemy”); the public rituals around it disappear, and it becomes instead a private tragedy, something clinical or else repressed. Which is why capital punishment is such a festering wound. Like in this story of a man on death row remaining alive for 2 hours after being given a lethal injection. Capital punishment is obviously horrible, but let’s not pretend that society doesn’t take much longer than 2 hours to kill thousands of people every single day.

Yesterday, Facebook reported that they now have 1.32 billion users, 400 million of which only use it on mobile, or roughly 30 percent. This would be bad news if Facebook hadn’t figured out how to make money on mobile ads, which they have. As Wired reports,

Mobile ad revenue alone this past quarter was nearly $500 million greater than the company’s total revenue two years ago.

This must have pleased Wall Street because, ta-da, Facebook shares hit an all-time high this morning.

In today’s drone news: Man uses drone to find missing 82 year old man before police. But let’s not buy this dumb story of ‘selfies’ being replaced by ‘dronies’ because, what? No.

People love Kanye. People love think-pieces on Kanye. But do people love Kanye enough to fund this Kanye Fanzine? If you donate $25 you’ll get a copy. That’s one expensive zine, but everyone to their own taste.

How the government labels someone a terrorist has always seemed completely arbitrary and corrupt. Turns out there’s a rulebook for how somebody gets labeled a terrorist, and the rules are like, if they have reason to suspect you of being a terrorist, then realize those suspicions were ungrounded, you’re still on the list. Obviously.

The rulebook ... was developed behind closed doors by representatives of the nation’s intelligence, military, and law-enforcement establishment, including the Pentagon, CIA, NSA, and FBI. Emblazoned with the crests of 19 agencies, it offers the most complete and revealing look into the secret history of the government’s terror list policies to date. It reveals a confounding and convoluted system filled with exceptions to its own rules, and it relies on the elastic concept of “reasonable suspicion” as a standard for determining whether someone is a possible threat. Because the government tracks “suspected terrorists” as well as “known terrorists,” individuals can be watch-listed if they are suspected of being a suspected terrorist, or if they are suspected of associating with people who are suspected of terrorism activity.

If I try to imagine what goes on inside the admissions office of some fancy college, I imagine a bunch of disillusioned 25-year-olds spilling soda, snorting coke, and laughing at the 19-year-olds’ naïve hopes for the future. This article by a former Ivy League professor on why you should avoid the Ivy League sort of confirms that picture.