To Be Young, Disaffected, and Black

Post-Ferguson Mixtape by ANTAGONISMS features artists who in the past year released songs about police violence and fighting in the streets.

Heart of the Lion A fling across state lines, long bus rides, cemeteries, and Ariana Reines. 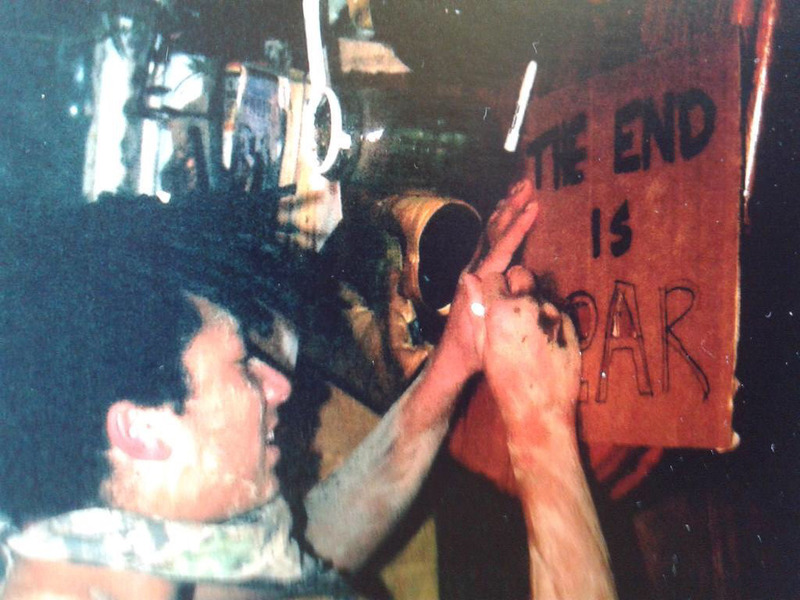 To Be Young, Disaffected, and Black

Thanks for your patience with this late issue, the dog ate our homework.

It’s been one year since the murder of Mike Brown in the suburban Midwest drew a fault line across the US. So much has been written on the subject, that I’ll spare you the retrospection and simply say that the militant uprising in Ferguson, MO following Mike’s killing represents a kind of historical milestone. Ferguson stands as the point in time after which all discussion about racialized extrajudicial police murder must also include a certain sympathy for the insurrection that will inevitably erupt.

A year later, I’m troubled by Mike’s ghost. Specifically, the specter of his figure in a graduation gown. For most white Americans in my peer groups, college was a kind of grand farce. A place they went. A concession to their parents for which they are deeply indebted. I can count on one hand the number of educated white people my age that I know who currently have a job that their undergraduate degree enabled. The education system and its financial structure are indisputably and profoundly broken. Yet, most of the discourse around racial inequality still holds education as the “way out” of the cycle of poverty for poor people of color. That’s what I was told, anyway. Post-secondary education is seen as a kind of missing ingredient in the “elevation” of communities of color, and a metric for how likely a person of color is to escape the hell of precarious service labor in a nation that measures economic recovery in Dunkin’ Donuts jobs.

This double-standard is fascinating. It’s as if Mike Brown’s murder was more tragic because he was robbed of the rare opportunity of escape, even though that escape was college, a farce under any other circumstance. “But he was about to escape!” We are not allowed even the apparition of escape.

I was one of those kids who got good test scores but never did my homework. In secondary school, I tested into the advanced classes, but then got Ds. I can’t remember a single instance of handing in a piece of homework. It’s not that I hated school per se, I just didn’t see the point. I grew up in rural Middle America as a working class black kid in a mostly white town – we’re talking 95% white. I had a very dim view of what I could do with my life.

Eleven Augusts ago, I was sixteen and I spent all of my money on a one-way bus ticket to an international anarchist gathering in Iowa farmland. Stepping out of my little world, leaving behind the abjection of white conservative modesty and “well-meaning” racialized social constructions. What I experienced there changed my life forever. I returned home with plans to drop out of high school and drop out of whatever I was fated to become.

By the next January, I had left high school. I had left my hometown to publish radical literature (on newspaper in those days) in a larger adjacent city. I taught myself to design, to prepare files for offset printing, to distribute literature on the internet. I organized a nationwide tour of small nowhere towns like mine, to search for other kids like myself. The following summer, I was a seventeen-year-old anarchist criminal, eating from the garbage, fleeing the police, going on adventures with people I had just met. Meeting people all across the country who, like me, had decided to drop out in one form or another.

I spent the next ten years designing radical literature and producing websites to the same ends. Building community spaces, breaking little laws, orchestrating tensions. I was living from odd-job to odd-job, not really thinking about my career or education as contiguous or even existent. Yet, the whole experience left me with what I now realize is the most valuable piece of knowledge in life: You can teach yourself how to do anything that can be done.

That was the ethic of the DIY culture of the late 90s and early 2000s. It was a culture of thousands of kids – we organized show spaces, produced our own books and newspapers, maintained deep networks from city to city such that any wide-eyed young person could enter into it and travel from place to place, and find a couch, or guest bed, or boat to sleep on. These were the days before AirBnB, before “Do I know anyone in Boston?” Facebook posts. It was a dropout culture that has since scattered: disintegrated into young urban professionalism, entered into the seclusion of high political critique, or settled into lumpen criminality.

I count myself among the disintegrated. The skills I built during that era of my life happen to correspond with real jobs, real career opportunities. I’m a designer and developer, but more so I’m self-taught with a decade of experience, which these days is ironically much more valuable than a design or computer science degree. I can find work that interests and challenges me, and I can get paid. I have friends with master’s degrees who serve drinks, and when I think back on how much skepticism I got from loved ones for dropping out of high school and living the life that I did, it’s honestly bizarre.

If I learned anything between chugging gallons of dumpster-dived carrot juice and stealing electricity from lamp-poles, it’s that dropping out prepares you to survive coming economic crises in ways you can’t even anticipate. Sure, I thought I was preparing for an imminent ecological collapse and can therefore make my own rope, compost, and weapons – but it also taught me how to build websites and distribute information quickly. That latter thing has proven to be more useful to me than guerrilla gardening was, and points to a more insidious reality about the “margins”. Namely, that being marginalized taught me more skills for surviving in the new economy than the education system could.

When the flames were finally extinguished at the QT convenience store in Ferguson a year ago, participants in the riots, neighbors, criminals, the criminalized, looters, church moms ... all came together in its wreckage to play music and celebrate the first true victory against police occupation of the era. The fantasy of every anarchist dropout for the last decade happened there on the streets of West Florissant.

I no longer agree that one can ever really “drop out” of society, nor that dedicating oneself to trying to is without its problematics. But I do know that attending that shady anarchist gathering when I was 16 saved my life, and dropping out of high school opened my world to a new possibility of life in opposition to authoritarian power. DIY anarchist punk can’t do that today, but something can. And should.

This is the Dropout Issue, where we tap our pencils, anxious for the bell to ring. We’ll take a close look at different dropout movements, personal accounts of student rebellions large and small. We’ll throw a side-eyed glance at economic assimilation, but glare equally suspiciously at those who think a new world is possible. Our elders will suggest that we “keep our doors open” and we will completely ignore that advice. Thanks for your patience with this late issue, the dog ate our homework.