August Cameos Part I We talked to Medha G., Ronika McClain, and H Kapp-Klote about their guilty pleasures, multiple intelligences, and what’s hanging in their closet these days.

Howdy, readers! As the rich get richer, the poor get poorer, and the weird gets weirder, you’re probably wondering the same thing as I: “When is Mask Magazine, an otherwise respectable journalistic endeavor, going to drop confirmed drug user and liberal hack Anwar Batte’s column?” Fair enough! I won’t go down without a fight, but today I’ll introduce you to a few new sources of formulaic filler text so you’re not forced to read mine. Alright? Alright. 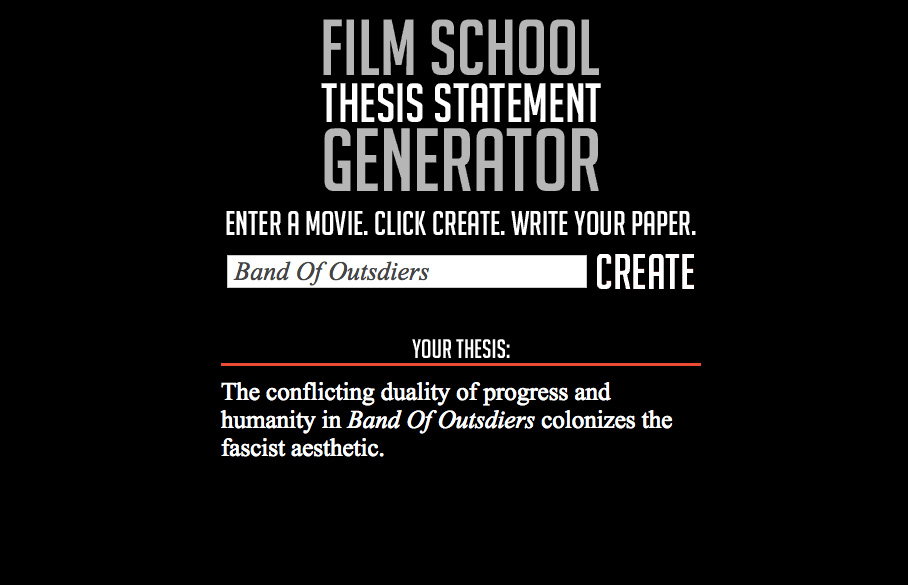 “We say that an author is original when we cannot trace the hidden transformations that others underwent in [their] mind”, wrote the essayist Paul Valéry. So, if all our best ideas are refurbished knock-offs anyway, why not lift a few from a script instead of a person for a change? That’s the kind of magic that WONDER-TONIC’s Film School Thesis Generator could work for you. Just put in a film, click ‘create’, and let the haphazard collision of critical theory and film analysis turn itself into the motivating idea behind your next term paper, master’s thesis, or universally-adored Facebook status.

Haha this thing is ridiculous: “Through the juxtaposition of poverty and nature, Trainspotting launches visual salvos against the primacy of scholarship in the Abrahamic religions.”
Wait omg too real: “The collapsing of identity and whiteness in Toy Story fragments suburban notions of containment.” 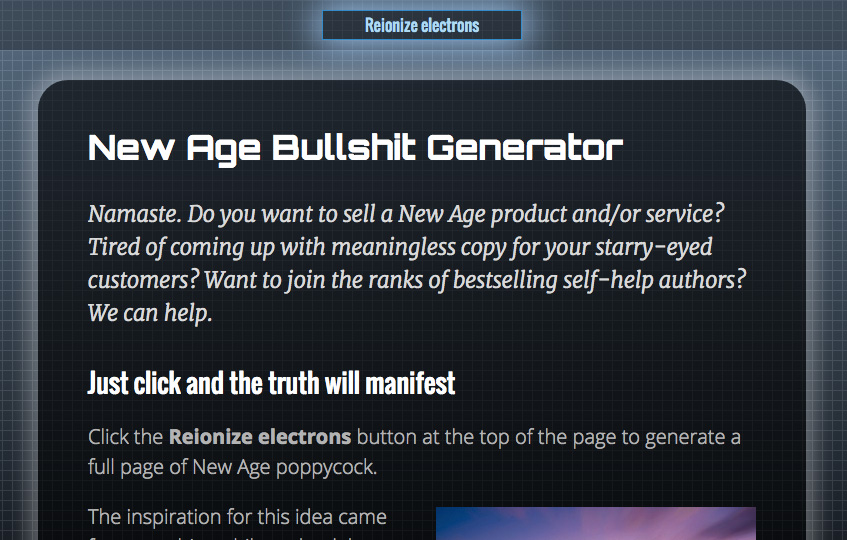 Everyone likes to hate on people who think they’re enlightened, actualized, or otherwise a humble steward of calm in a fast-paced world. But have you ever really paused to consider just how your fundamental electromagnetic connection to everything else in the universe shapes your consciousness? Don’t let the name “New-Age Bullshit Generator” dampen your curiousity; click through, read, and realize your potential.

Haha this thing is ridiculous: “It is in deepening that we are re-energized. We must learn how to lead archetypal lives in the face of materialism.”
Wait omg too real: “Throughout history, humans have been interacting with the planet via electrical impulses.”

Last and definitely least – for its realization of the necessity of self-abolition – is Automatic Insurrection. Automatic Insurrection represents a call to truer and deeper algorithmic subversion, not the banality of the milieu’s Invisible Committee reading groups. While the bureaucrats of dissent limit the boundaries of social war to humanist articulation, AI proposes the abandonment of authorship for a rupture born from lines of code. For AI, spontaneous generation of revolutionary jargon is not just a blow against the tyranny of formal composition, but a contemptuous rejection of the superficiality of this tired lifestyle (ft. Young Thug and Rich Homie Quan).

Haha this thing is ridiculous: “This is a call to zones of indistinction which need no justification, not an insistence on normalization.”
Wait omg too real: “Not to dream of new ways to make demands, but to make manifest the subterranean zones of offensive capacity in the heart of each moment of friendship.”