Young Thug Flaked When things don’t go as planned you have be creative.

Imagine Something Else A rappin’ cowboy searches for the thrill of life in the middle of Montana. 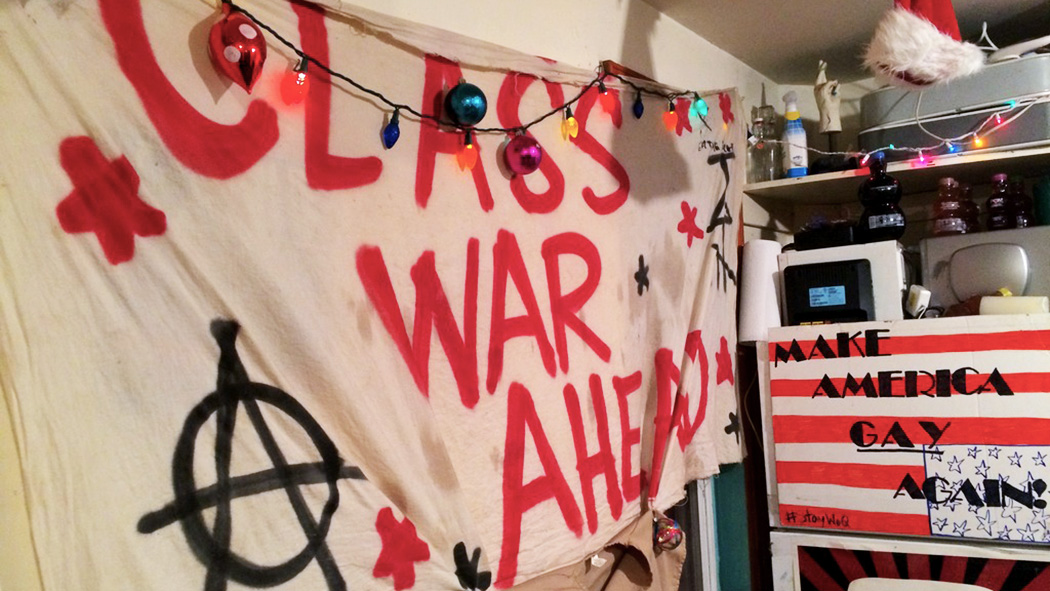 All photos by Ash Jegroo

On the evening of January 13, I found myself wandering, for the second time, into New York City’s newest anti-fascist oasis: Red Stuy. Surrounded by anarchist and communist banners and stickers with puffs of cigarette and blunt smoke swirling in the air, radical musicians, comedians, and performers welcomed me into Red Stuy’s aptly named “Another F*cking Red Stuy Show.” I couldn’t help but feel at home.

Tucked away on a quiet block in Bed-Stuy, Brooklyn, Red Stuy is both a space and a half-a-dozen-strong collective of working class, anti-fascist activists looking to help build a culture of resistance and have some fun.

To get the address, you’ll have to message one of the members of Red Stuy personally and ask for it. The address leads you to the Red Stuy house, which holds the grungy yet cozy basement that is used as the venue for their punk shows. What the space lacks in size, it makes up for in authenticity. Over the last year, members of the collective began moving into rooms of this house one-by-one, until the whole house was pretty much occupied by leftists. Then, a few months ago, the squad wanted to do something fun and political, and decided to throw their first punk show. 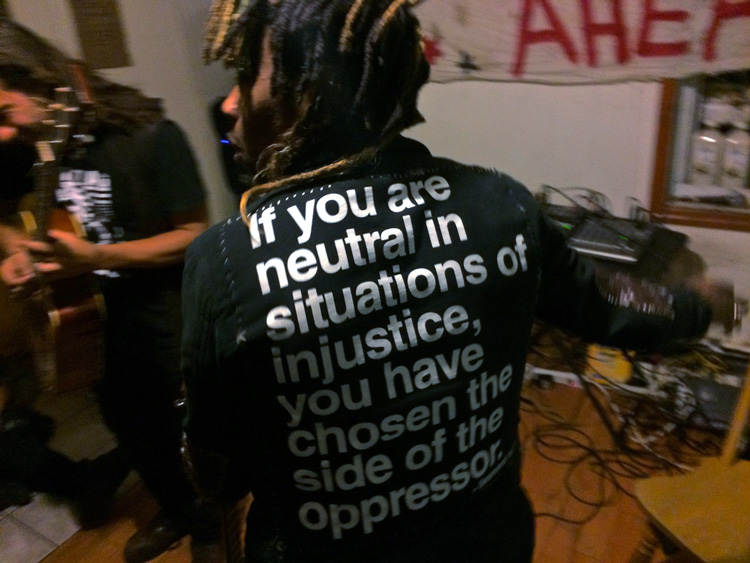 “All art has a political standpoint,” Ellis, a 30-year-old Red Stuy member who helps bring together the bands for the shows, said to me. “So anything that’s talking about the kind of thing that the comrades talk about, like revolution or militancy or how we’re going to have to confront the cops, that’s something we hold dearly, and we think the political side should be expressed. That’s why we have house shows.”

As people started showing up to the shows, the Red Stuy crew realized that the shows could be used to raise money for radical causes.

“We all like punk music and we all had a house together,” Jeremy, a 22-year-old Red Stuy member who often emcees at shows, told me. “And we knew a lot of punk bands in New York, a lot of leftist punk bands. We did a house show, and it was really fucking big. And we didn’t charge any money. Then we figured, next month, let’s do another house show.” 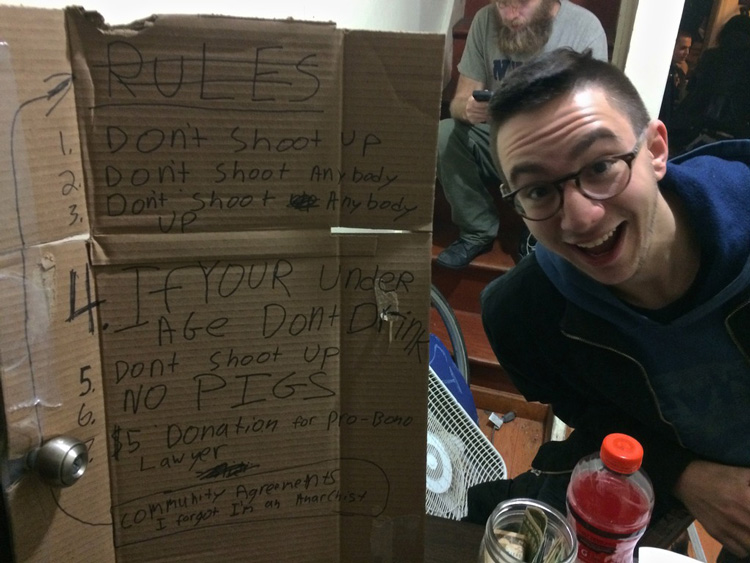 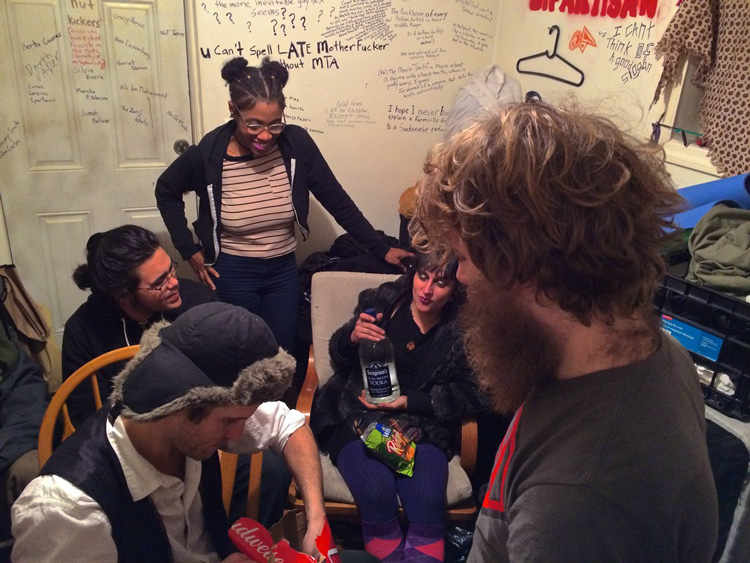 That show, titled “An Alleged Punk Show,” took place on December 3. Red Stuy had suggested donations of $5 and gave the money to a National Lawyers Guild lawyer who had defended Red Stuy members pro bono for protest-related arrests. I sang along to covers of “Baby, I’m An Anarchist” and “Self-Destructive Anthem” before bands played their own original material and other comrades did communist comedy bits. The show was packed, raised a good amount of money, and got a lot of love from leftist punks in NYC. I got pretty wasted too.

“The reception has been amazing,” Taylor, a 25-year-old Red Stuy member who acts as hostess of the shows and the emotional backbone of the group, told me. “A lot of people have been here, and they’re like ‘this is the greatest thing I’ve ever seen’ and that’s really comforting to have that happen in your own home.” The money raised at their most recent show went to the commissaries of political prisoners, and Red Stuy is looking to raise even more money for radical causes in the future.

“The idea right now is doing one a month and just getting bigger and bigger by each show and having some bigger-name bands playing in the next few months. So we’re trying to scale up and make it so that we actually can make and raise money for different causes,” says Shay Horse, another Red Stuy resident who does the photography and makes the fliers for shows. “Because with Trump and the Republicans taking over everything, there’s definitely going to be a lot of stuff to raise money for. So we could at least take an inch off the mountain of bail costs or donate to queer prisoners, immigrants rights, helping fund sanctuary spaces...” 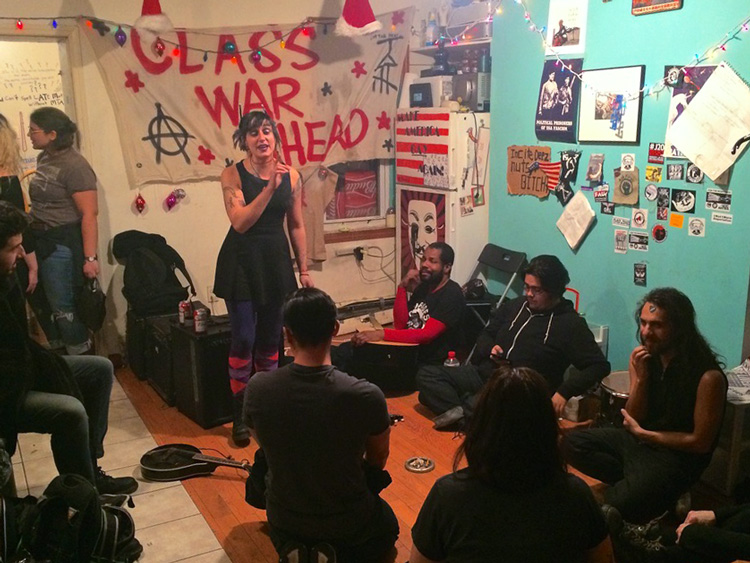 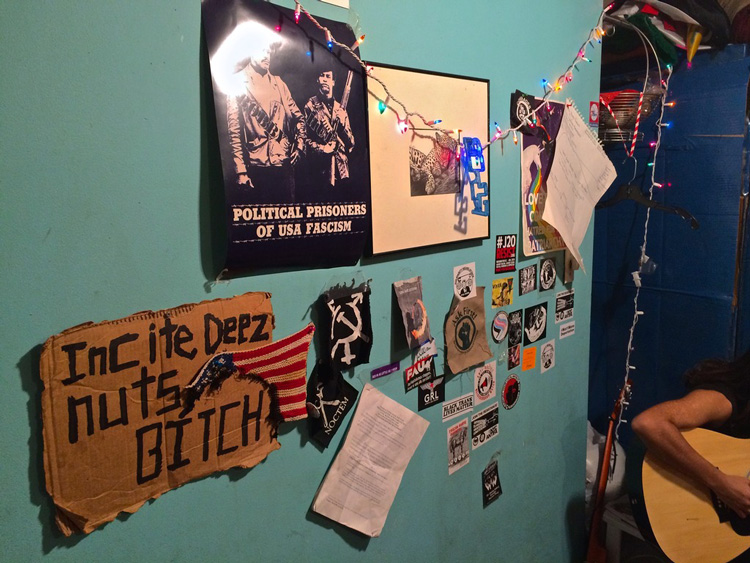 After seeing how well-received the space has been, the crew is also looking to turn the house into a sanctuary space and use it for other subversive purposes. “It’s a punk DIY space, and it’s run by a bunch of radicals. And I think that’s the beauty of it,” Jeremy said. “But if anyone has things they can use our space for, we’re more than willing to help them out.”

And aside from its practical revolutionary purposes of spreading radical ideas through music and raising money, members of the group all told me that Red Stuy is a place where people can “come home from America” and escape the alienation that capitalism inflicts daily on working-class radicals like themselves.

“I’ve been around and seen a lot of radical spaces – like in Montreal, Rio de Janeiro, and even Ferguson. Having a communal space can really help activists,” Shay continues. “Especially having a place where they can hang out that’s not a bar, where you can only be until 4:00 am, and where we have to go outside to smoke and do whatever.”

Red Stuy members told me they want to hold events that add to the space’s hospitable ambience. “We were talking about movie nights so hopefully that happens,” Taylor told me. “And art shows and also just having people over for dinners.”

Shay told me that other radical spaces tended to be too academic and that events like radical movie nights and dinners would be focused on attracting a much more laid back crowd. “We’re trying to make something that is much more punk and much more accessible to average people,” he said. “People who wouldn’t want to go sit in a room full of academics and eat chickpeas.”

So if the hard work of enduring capitalism ever wears you out, make sure to follow Red Stuy, hit up their next show on February 12 titled “Commie Back Girl,” and come home from America.