#DisruptJ20 People are gathering in DC to disrupt the inauguration of Donald Trump. 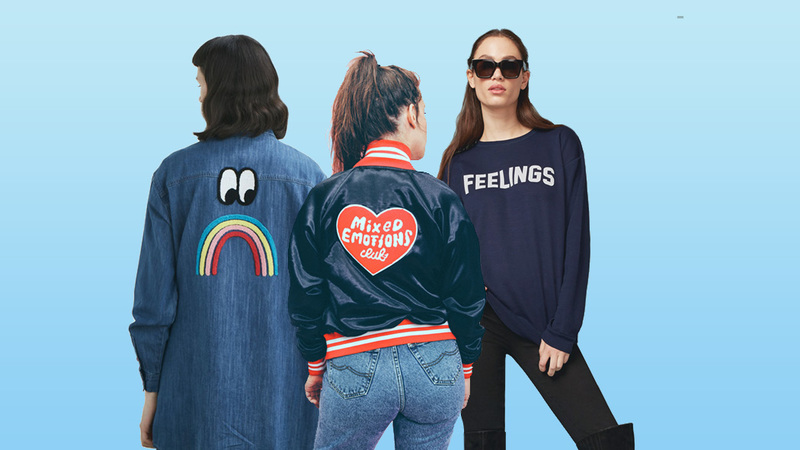 Being sad never looked so cute.

In 2013, Complex posted a series of photos of models entitled “Are These Runway Models Stoned or Sad?” At the time, when normcore and minimalism were the emerging trends, this review was written in jest and not particularly rooted in any one fashion trend. But if it were to be published today, the same would not be true: thanks to the popularity of sadness on the internet, the clothes too would hold some tie to this theme. From pin-heavy labels touting ironic emotional phrases to sweatshirts reading “Sad Girls Club,” to be sad is now its own fashion trend. And not just that: wearing your feelings on your sleeve has come to signal a new kind of feminine autonomy and strength.

Let’s back up. The “sad girl” as an identity was born of angsty Tumblr adolescents and young adults whose glaring nostalgia for broken heart best friend necklaces and messy 90s bedrooms created a new space for misery. It’s as if the generation of young women and queers who came of age between 9/11 and the 2008 financial collapse took the entire world’s malaise upon their shoulders and turned the weight into melodramatic poetry, cutesy collages, buttons, and zines. 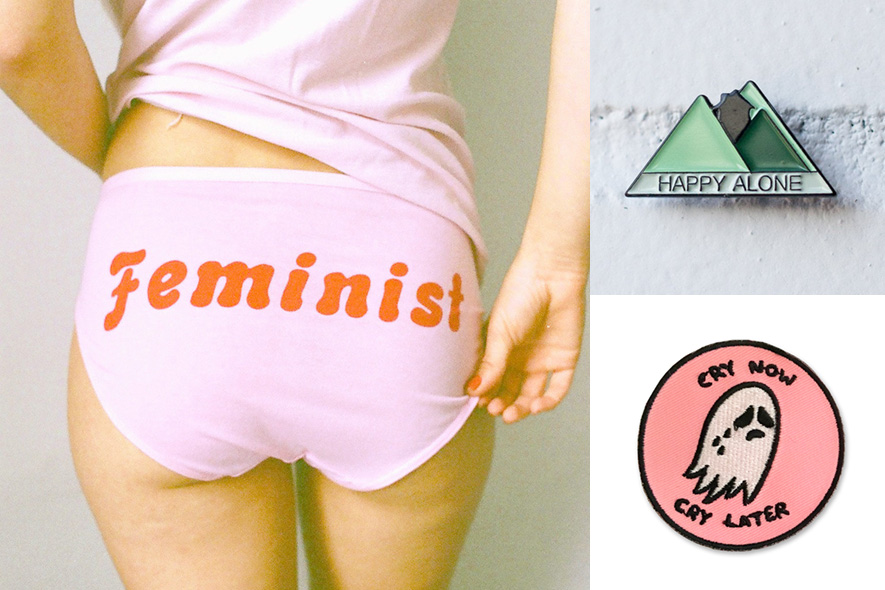 Audrey Wollen, an LA-based artist, describes these trends as components of Sad Girl Theory, and notes this prevailing sadness – and the behaviour of sharing it on the internet – as an act of resistance, “a gesture of liberation ... articulate and informed, ... a way of reclaiming agency over our bodies, identities, and lives.” In a similar vein exists Melissa Broder’s @sosadtoday, a Twitter account (and later, book) devoted to punny self-loathing and existential longing.

This self-referential ode to girlhood gloom started spreading on the internet in 2012: first, with the word “feels” or “feelings,” later elongated into the phrase “all the feels,” a saying repeated by those experiencing an overwhelming state of emotion. Initially in response to internet gossip, memes, TV characters, or photos of animals, these text proclamations grew into a series of t-shirt and tote bags bearing phrases like “mixed emotions,” “emotional baggage,” and “pain, sorrow, etc.” Sadness became more than just an emotion – it became a sartorial statement heavily influenced by kawaii, Lolita, and some parts grunge. Choice cool brands like Reformation and Lazy Oaf joined in varying on-trend designs, like a graphic sweatshirt with the word “Feelings” dead center, or a rainbow-lipped sad face, while at Vetements, sadness swept in on a shirt labeled “Insecurity,” alongside the onslaught of indie brands like Me and You, Shop Jeen, and Tuesday Bassen, who introducedtheir own dejected accessories and tees, all with the a cutesy, sitting-on-a-cloud flare. The sentiments themselves might have been emo, but the vehicles were often soft, baby pink, loopy 70s-style script, and big-eyed cartoon character styles. Being sad never looked so cute. 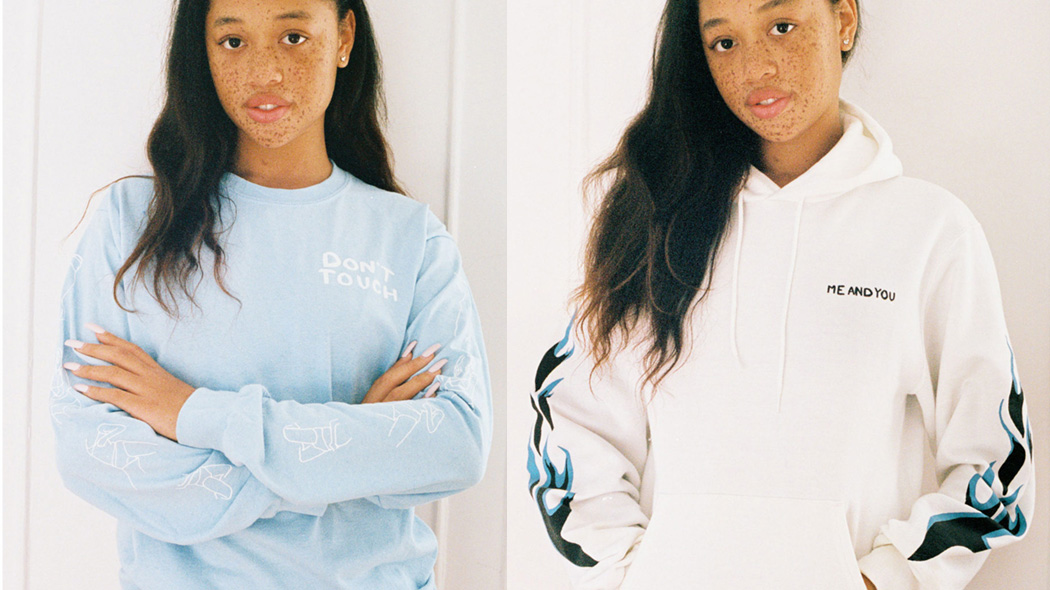 Amongst all of these examples of female disquietude as told by teens, there runs a thread of belonging, both because of the shared mood and the ways in which this mood is expressed. Many of the methods used to represent these messages, beyond the color palette and style, show in the same ways clubs or leagues affirm membership: varsity jackets, patches, enamel pins, and name-of-the-week underwear. The mentality here might be one of sadness, but beyond that, it is a shared sense of female friendship in two key methods we use to bond to one another: through mutually-worn, tribal-esque clothing, and through sharing our feelings of the world around us. Being explicit in your sadness and deep emotionality, something women have long been discriminated for, is now a crucial element to feminine solidarity.

Where the trend started showing signs of itself back in 2012, it became introduced into the mainstream with the help of femme-centric independent artists like Tavi Gevinson and Petra Collins (alongside the dozens of creative women they employed and inspired through their respective publications, Rookie Magazine and Babe). Starting in the late aughts, these bands of women were the first to publish images of mid-90s girlhood bedrooms and young women alone or with like-minded people with bright stickers decorating their laptops, homemade wall-hangings, and pastel underwear. In the same way as sad girls, a sense of crafting an identity together was ever-present in these groups, both literally and figuratively, where women bore their allegiance to one another in DIY styles, wearing embroidered garments made at home or sold by other girls and women of the internet. 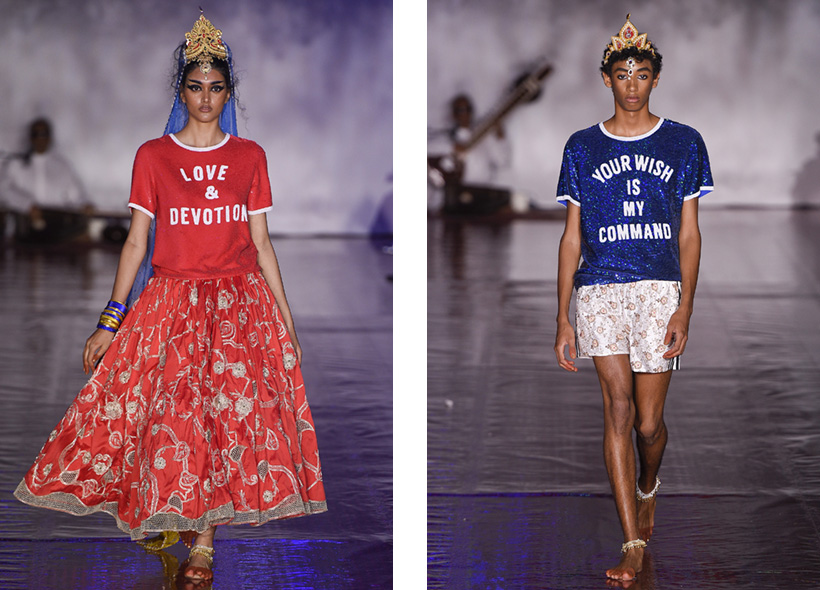 As with any trend, visibility on the runways of major fashion designers translates into their acceptance to the outside world, and sometimes, developmental changes that come from being viewed on a new platform. For sad girls, the trend’s latest appearance on the runways has shaped it into something bigger than just the female bond of heartsickness – instead, we’re seeing a more inspiring version represented. In A/W 2016 and SS 2017 shows, with the influence of mid-90s girlhood and grunge still very much present, tokens of girl’s freedom from sadness have been visible in fashion as of late, too: take Ashish’s “Love and Devotion” and “Your Wish Is My Command” tee, Each x Other’s “You Are Me” cropped sweatshirt, and most popularly, Christian Dior’s plain white tee reading “We Should All Be Feminists”. These are not a far cry from the  “Feminist” underwear seen on girls photographed by Petra Collins. If the sad girl trend did anything uplifting for fashion, it helped reignite the unified feminist voice, even if it took shirts broadcasting “I don’t care” and “pretty mess” to get there.