Adidas’ new freaky Future The premiere of their new line depicts influencers going against the grain. Take a look.

Fly Shit Only Get to know L.A. ONDA, the anti-politics, anti-capitalist, and 100% dust-free crew throwing down on the West Coast.

so food / no good 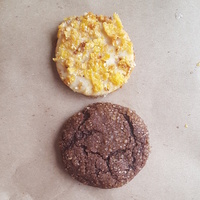 Everybody Rots: Surviving with Scallion Kimchi 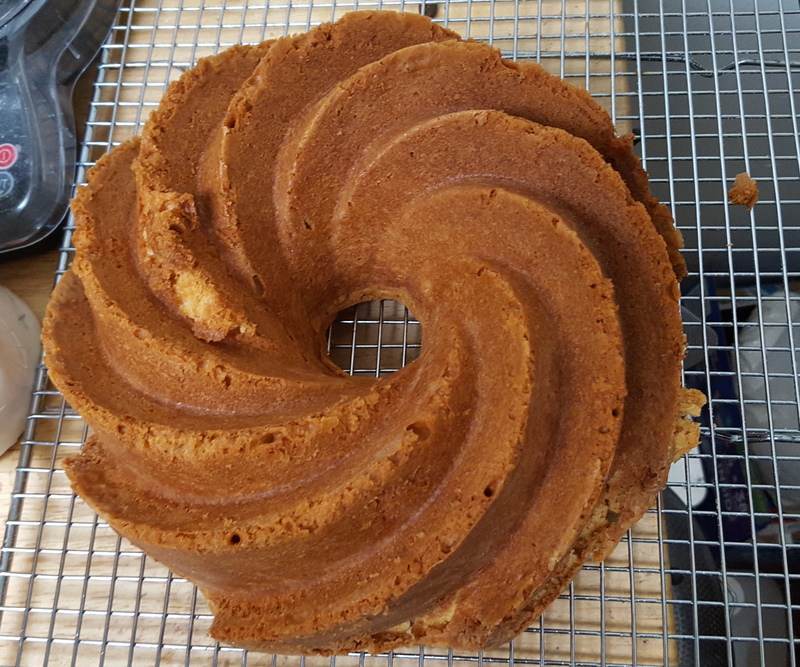 Somehow, my closest friends were all born in February. I had three cakes to bake in as many weeks, all while going through a special kind of hell over the course of the month. After six months of being stable, and dare I say happy, some school trauma sent me into panic and dissociation, so the opportunity to focus on baking an elaborate cake each week felt like therapy. My strategy was to double up on this cream cheese pound cake recipe, and dress it different ways.

Below are three options – fancy, fancier, and fanciest – for dressing up this cake. I am notorious for thinking difficult cooking projects are easy, so I won’t say these are simple but they are worth the time and effort. The cream cheese might seem extra decadent, but it’s just replacing a stick of butter and it gives the cake a slight tang and a creamy texture. The cake freezes beautifully if you want to bake it up to a month in advance.

Fancy: with Berry Coulis. Coulis is the cooking term for “berry sauce that is so delicious and so simple that we are going to give a French name so it sounds too fancy to make at home.” Go easy on the sugar and citrus at first, and then adjust the sweetness and the tartness to your taste. The different fruits lend their own unique kinds of tartness to the coulis – lemon is classic, lime heightens the contrast with the sweetness, and grapefruit will add a subtle bitterness. Make the coulis before you bake the cake, and the flavors will settle into each other while you wait. This way, you can also zest your citrus and toss the peel (but not the white part!) into the cake batter. The oils in the citrus peel will add a really great aroma and flavor.

Fancier: Twinkie Cake. This shit is (un)real, and it ends up exactly as advertised: a little gimmicky but pretty fucking awesome. Delicious cake filled with a marshmallow filling that tastes like the dream of cavities to come. The assembly instructions are for either a bundt or tube cake. If you are using round cake pans for this one, scoop little divots of cake out instead to avoid compromising the structural integrity of your masterpiece. Alternately, if you happen to have a food torch or blow torch, you can turn this beast inside out by frosting the cake instead of filling it, and then toast your frosting until it’s brown.

Fanciest: Wedding Cake. I made this for one of my favorite people in the world. It was her birthday, she wanted wedding cake, so I gave her what she wanted. Sponge is more traditional, but this pound cake is more delicious. The assembly instructions are written for three 9-inch round cakes. If you want more layers, split your cakes in half lengthwise using a serrated (bread) knife. This will require more marzipan and about a full jar of jam.

1. Preheat your oven to 325 degrees. Butter and flour a 10-inch tube pan or a 10-inch bundt pan (using a bundt pan will leave enough batter for a 6 cup cupcake pan, so butter that up too!). If you want to do a layer cake, butter and flour three 9-inch round cake pans.

2. Beat the butter and cream cheese mixture at medium speed until smooth. You can use a stand mixer, handheld electric mixer or go manual with a wooden spoon. Add the sugar and beat at high speed until fluffy (four to five minutes). Lower the speed and add the eggs one at a time, taking care to beat until fully incorporated and scraping the sides of the bowl with a spatula before adding the next egg.

3. Add the remaining ingredients (vanilla extract, flour, and salt) and mix just until the dry ingredients have been incorporated.

4. Pour the batter into your pan of choice and bake until a toothpick or knife (let’s be real, I use knives) inserted into the center of the cake comes out clean. This will take anywhere from 20 minutes for the cupcakes, to an hour or just over for the tube pan.

1 10 oz. package frozen berries of your choice, thawed
¼ cup water
2 tablespoons to ¼ cup sugar
Juice from half a lemon (or lime! or orange! or grapefruit!)

1. Place all the ingredients in a blender and whip that shit until it’s smooth.

2. Drizzle on cake right before serving. 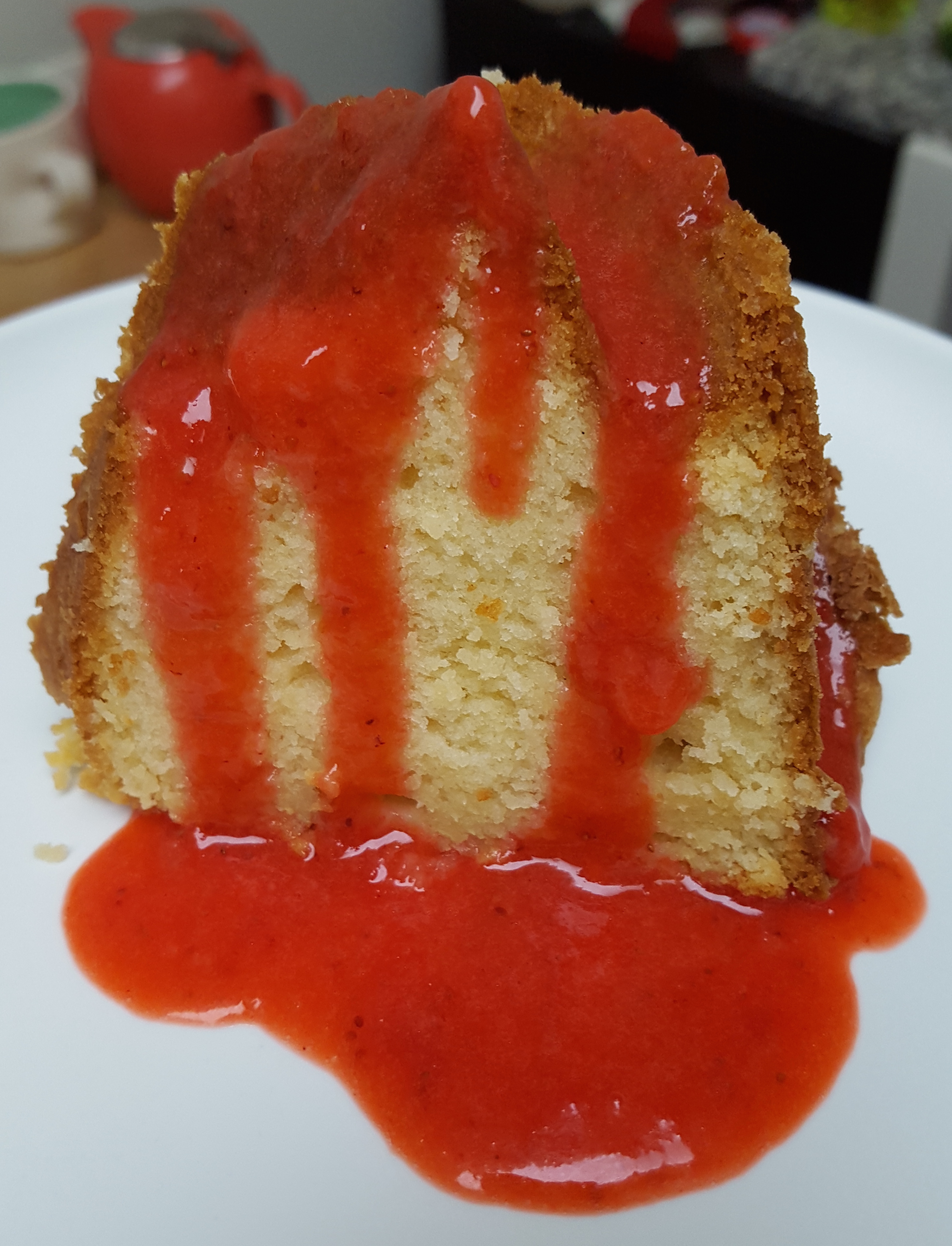 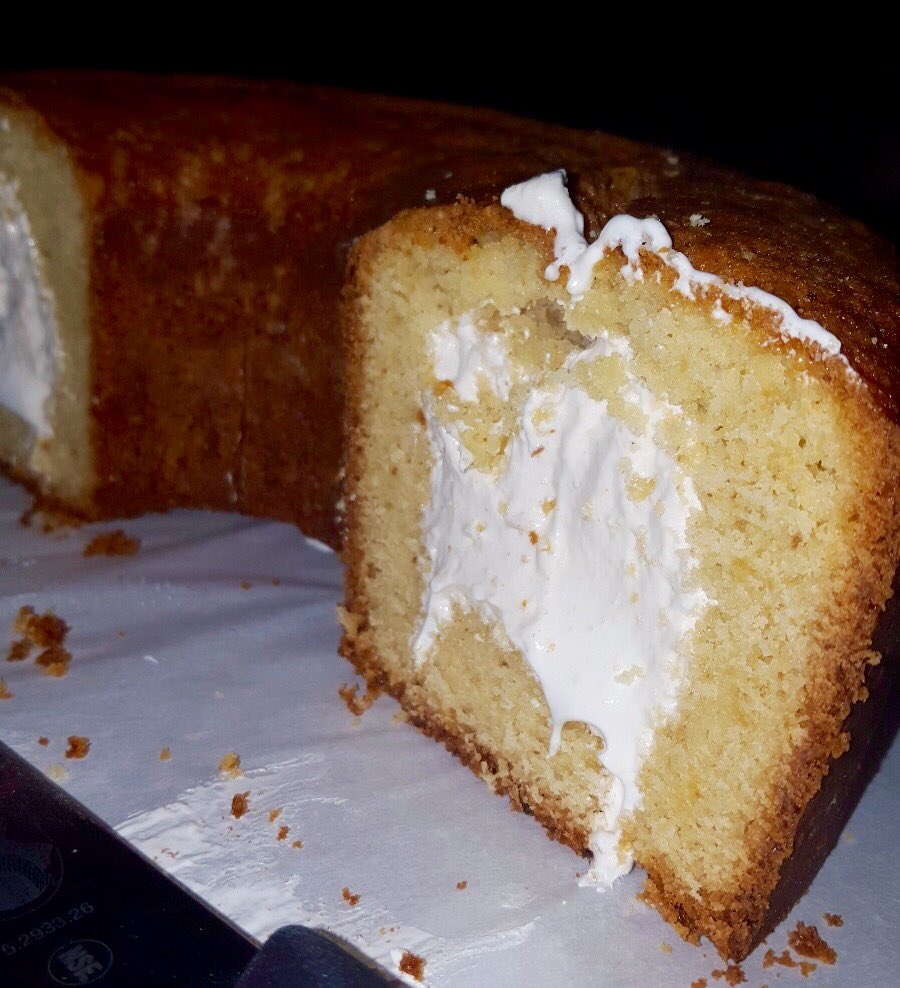 1. Pour water into a sauce pan until it reaches one inch deep, and then bring to a simmer over low-medium heat. Add egg whites and sugar to a metal bowl and then set over the simmering water, whisking occasionally until the sugar dissolves. You shouldn’t feel any granules when rubbing the mixture between your fingers.

2. Either transfer to a stand mixer or use a handheld mixer to whip the egg white/sugar mixture at the highest speed until it doubles in volume.

3. Add the vanilla and whip until incorporated.

To assemble: Take your cooled cake, turn it upside down, and carefully scoop out the cake so there is a place for the filling to go. I like to carve out a neat little circle, set it aside and then scoop out some more cake to make a marshmallow sewer to run through the bundt or tube cake. I use the cake circles to act as a sewer cover, and then eat myself sick on the cake waste and leftover filling so there’s more of the finished product for my friends. 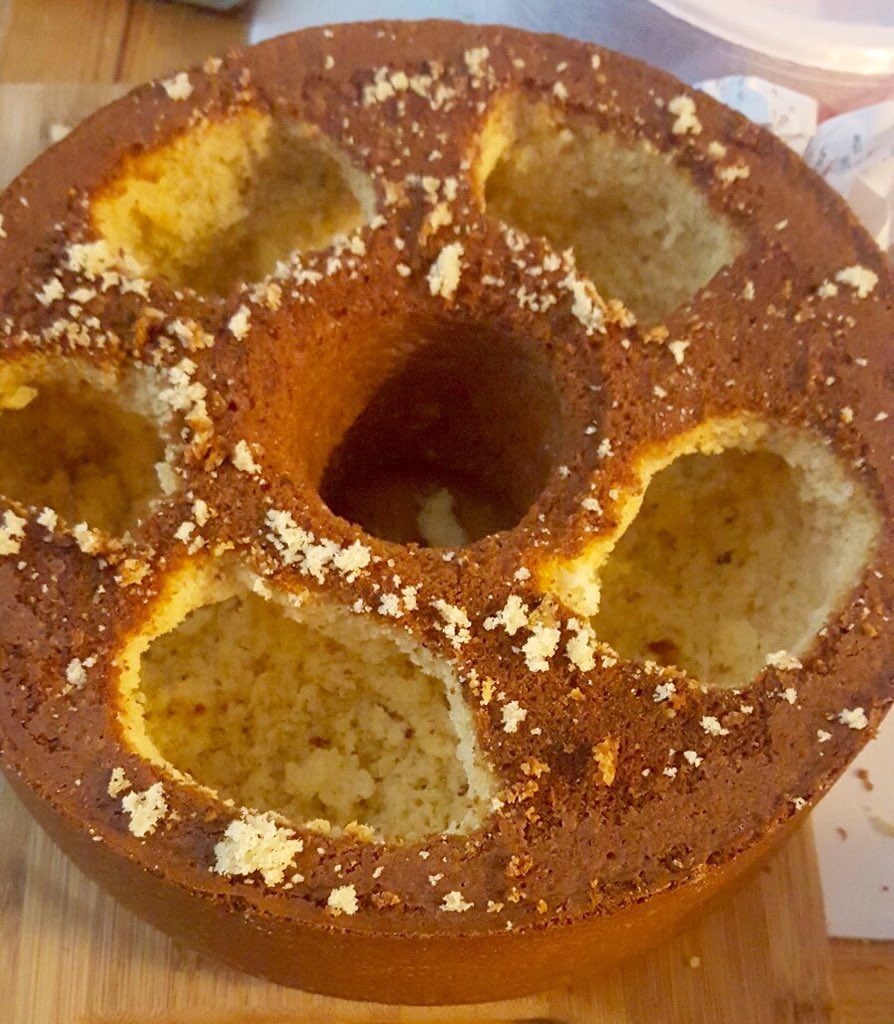 2. Add a half-stick of butter, whip until smooth and repeat until you have used up the butter. It takes awhile, but it’s worth it.

To Assemble: If your cake domed while baking, use a bread knife to level the top and save the scraps for snacking. Split the marzipan into three equal pieces. Using powdered sugar to prevent sticking, roll a piece of marzipan into a circle that will cover one of the cake rounds. Repeat with the rest of the marzipan. If you don’t mind being a little sketch about it, you can just use your fingers to press the marzipan into a disc shape, so you don’t get powdered sugar everywhere. It’s a little less precise, but it’s going to be sandwiched with frosting and cake, so who cares.

Line the top edge of each cake round with a little bit of buttercream so you have a barrier (or should we call it berry-er?) to keep the jam from spilling over the sides. Then take two tablespoons of jam, and spread across the top of the cake round. Top the jam with a marzipan round. Once you have all three cake rounds jammed and marzipanned, stack them. Dump about two-thirds of the remaining buttercream on top of the cake-stack and start frosting by spreading the buttercream across the top and letting it come down the sides. Use the remaining buttercream to patch up any spots that look insufficiently frosted. 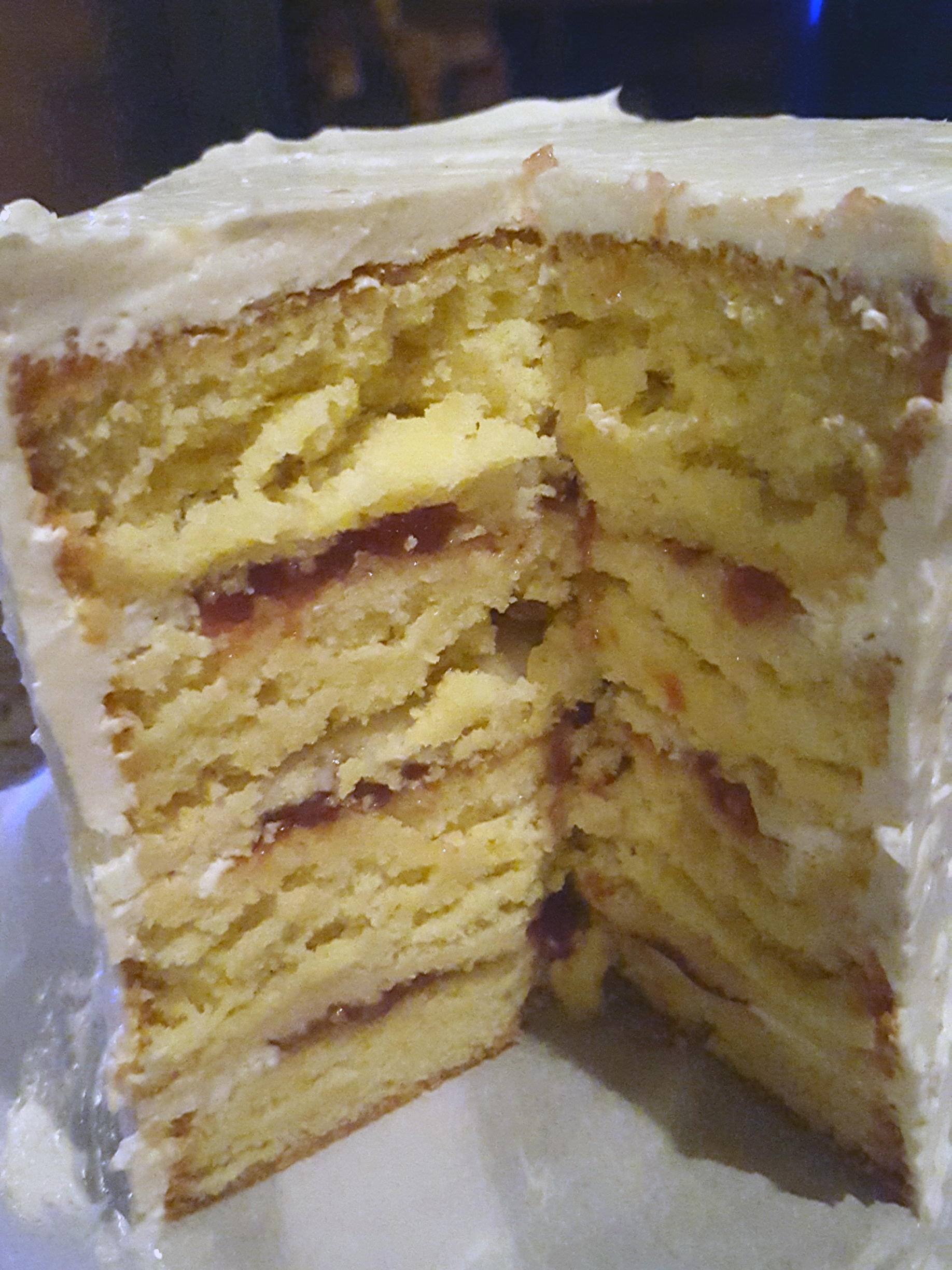 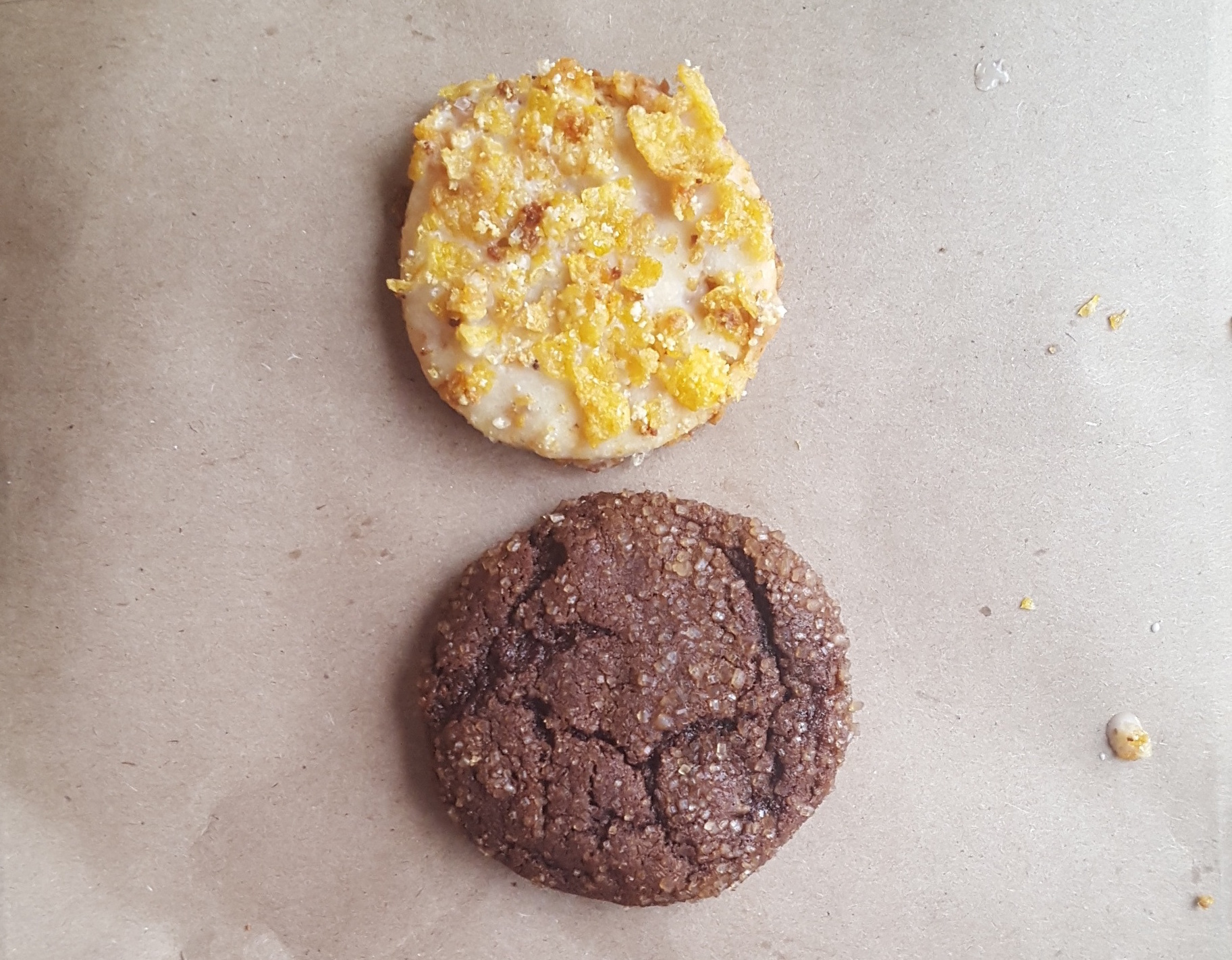