Cake by the Pound A simple pound cake recipe that gets as fancy as you want it.

Lies, love, matte, and money Poet Jenny Zhang spills on makeup trends, how to be financially transparent with your friends, and being an obsessive person. 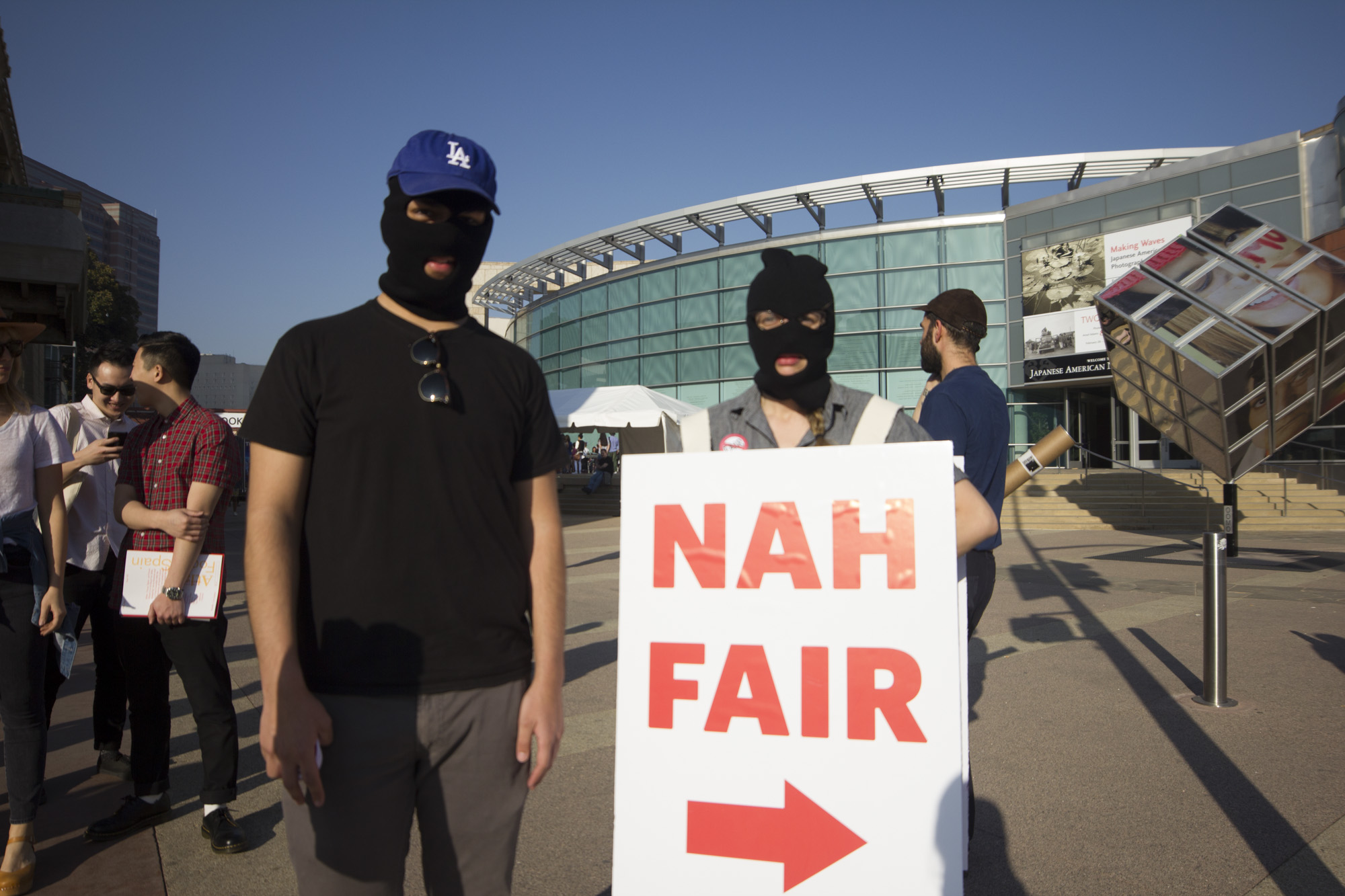 I was recently asked how I got into radical or antagonistic political circles. I’m no good at answering questions in general, and this one always gets me particularly flummoxed – like, I don't know, and on top of that, I don’t even get it. I guess that’s because, for so many of us, being down has never been about getting woke or learning about radical politics, or whatever. It’s just what we’ve done everyday, all along, to get free, or to just get by.

How can we resist right now?
Or, we’ve been resisting this whole time.

That’s from an essay by the Los Angeles based crew of non-white antagonists known as L.A. Onda. I first came across L.A. Onda earlier this year on Twitter, where they’ve been sharing all kinds of gems, from clear-cut indictments of boring and white lefty activist, academic, and art scenes, to all-caps anti-politics aphorisms (bilingual, to boot), to bits of oft-forgotten radical history. If you need something like a signpost, try this one: “our manifesto? FLY SHIT ONLY.”

They’ve been busy putting out plenty of fly shit this year already – a love-cum-breakup letter to L.A., a calendar of local history that features Christopher Dorner as Mr. February, and Nah Fair, a one-day book fair held on the same weekend as the L.A. Art Book Fair (but one-upping LAABF by featuring “jokes, hustles, and stuff” in addition to books and tables). Which is I guess what they mean by pushing culture “off the fucking cliff.” Sick.

We got in touch with L.A. Onda to talk about how they get their crew together, putting on bomb events with no budget, and why you don’t have to be “woke” to “get it.”

Can you share a little bit of the story behind L.A. ONDA and Nah Fair?

One day we were hanging out drinking some chelas frías at one of our pads and we were like, we should do this thing where we say what we’ve been wanting and meaning to say to L.A. and beyond. And then we did it. That became L.A. ONDA. Post-situ, materialist-feminist, anti-capitalist anti-politics from not-white folks is not as common in L.A. as you might imagine.

Then one of us was like, we should do like a launching event before we even have any real thing out there to drop in L.A. like a dank bomb and then we did it. 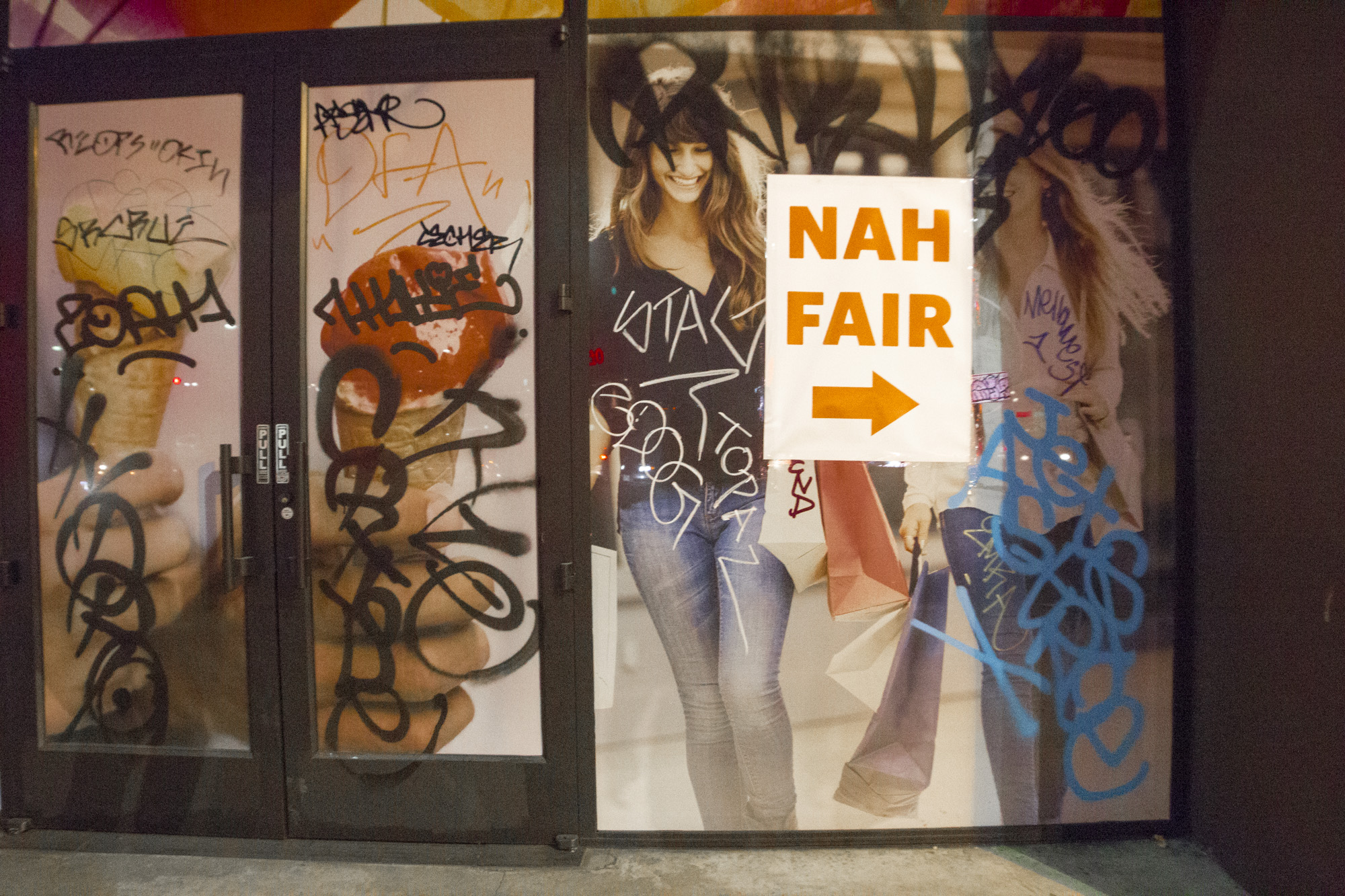 Are y’all looking to any particular groups or events or moments (whether contemporary or otherwise) as points of inspiration?

A few groups we are really into are the Situationist International; those peeps that tried to crowdsurf into the Smell to see Dystopia cuz punks is wild in L.A.. Those peeps that robbed a Bank of America in the San Fernando Valley, and then threw cash out the window in South Central cause they knew they were gonna get busted. Does Dorner count as a group? The Gulabi Gang and their rapist beatdowns. The Chinese that burned down the fake Chinatown in L.A. that was built by some rich White woman as a business venture; the Bonnot Gang. The now-defunct wrestling faction The Shield. The women who defended the canons of the Paris Commune from the French National Guard. All women who have killed their rapists.

Some events we’re into are like, when that guy threw a shoe at G.W. Bush. When the Terminator took out a whole LAPD station. When Snoop Dogg called out NYC at the 1995 The Source Awards. The L.A. Riots of 1992. The future assassination of our next president. And we’re still buzzing a lot off those people that started punching, kicking, and fucking with the KKK in Anaheim. The rage we felt when they buffed SABER’s piece on the L.A. River. How both the fires and fashion of the Watts Riots were equally dope. Them kids on those freeways nationwide. Halo-halo from Chowking in K-Town. When homie threw a wrench into the exhaust pipe of that yellow tractor when they tore down the South Central Farm. Also when the compas shamed the white people in the trees at the farm. When shit popped off in MacArthur Park in 2007. Pupusas in Pico-Union. When the Silver Lake neighborhood council had to formally declare they weren’t on the Eastside to stop the transplant kids from saying that. The 90s backpacker scene at the Good Life Café. The years when Flor y Canto Centro Comunitario was here. NOT-Occupy LA.

What was the whole process of putting Nah Fair together like? Are you going to do it again?

It was more and less work than anticipated. It was exhausting and fun and we’re proud of each other for doing this with hardly anything resembling a budget, some peripheral experience but nothing like this, and with our own fucking muscles, sweat, and sleeplessness.

It was a fun one-time troll/sideshow deal to fuck with the L.A. Art Book Fair. So, maybe.

What were some of your highlights from Nah Fair?

When our friends didn’t get arrested for doing promos for the Nah Fair at the LAABF; pretty much keeping a buzz the entire time; when the guy from ORIGINALS (AKA Teen Angels) starting DJing in the back of the fair and then left the fair with all his stuff there and then came back for all the stuff; when people said the LAABF sucks and they wished they could’ve rolled up in the Nah Fair instead. 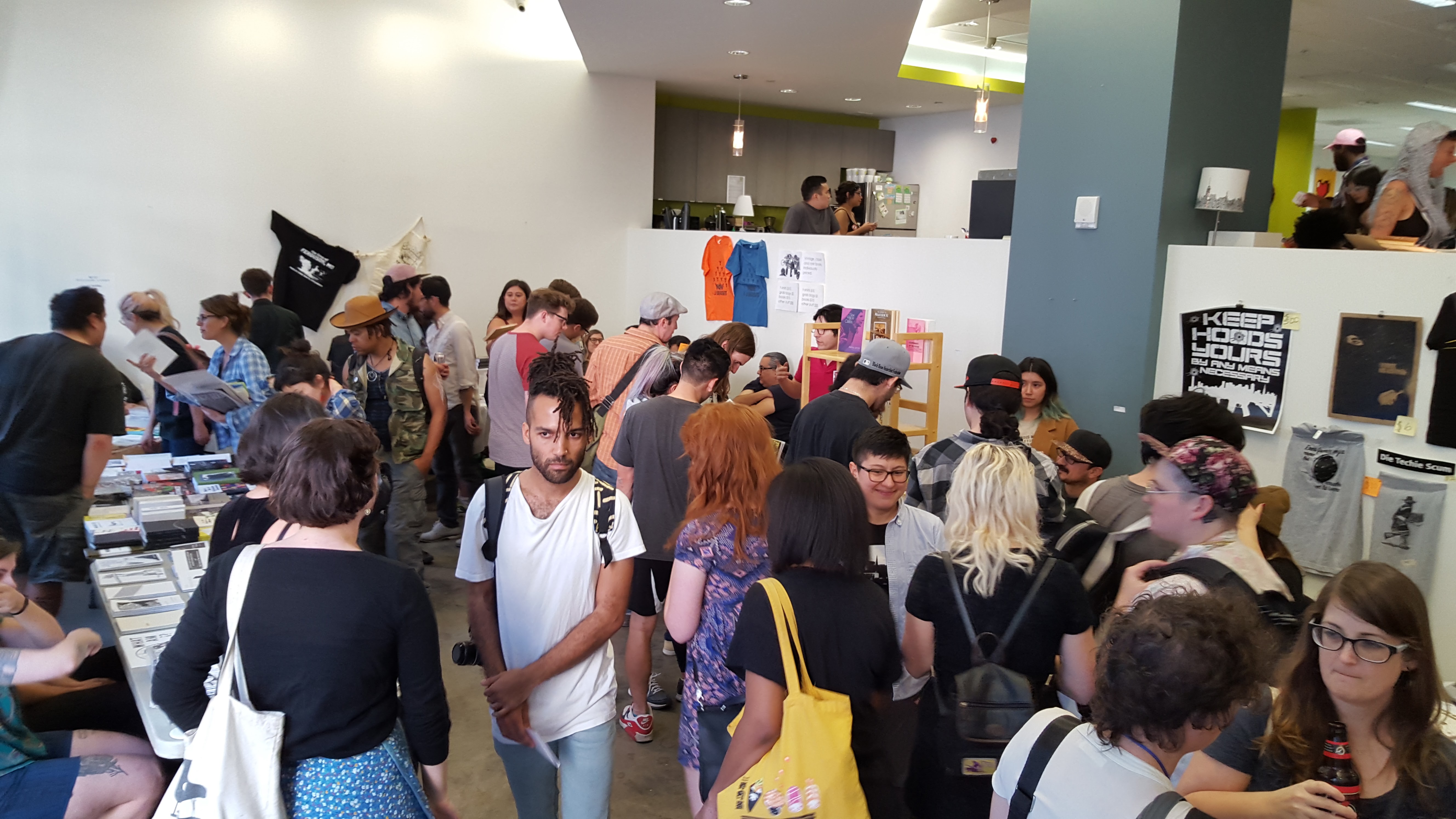 What’s next for y’all?

Music videos; buckets of champagne; looting Silver Lake; going international; getting mini-trucks. Usually new ideas come out of day drinking. maybe a chill pool party kickback somewhere for summertime. Cool peeps no snappers, DJs. A summer fest like the Greek insurrectos do, throwing a massive anti-work day-ditch party on the tracks of the Alameda Corridor, glossy prints, open up a mezcal distillery, D.F. and T.J. collabos, limited edition shit for sneakerheads, open a juke and bounce exclusive nightclub that bars white people from entry, fostering the POC anti-political post-situ weirdo scene in L.A., presentation tour through Arizona where we only eat Takis Fuego for a week, risographing maps reevaluating where we should fuck shit up and why, a campaign appealing to Papa Francisco to fast-track Chris Dorner to sainthood.

Is “woke” a useful concept to you? Also, how do you suss out your co-conspirators?

We prefer to hit the snooze button, so nah. Woke used to be called class consciousness, or being “aware” of your own position as the exploited in this society. Of course “woke” means more than just that, but that’s its origin story. The problem with the idea of “woke” or to be class conscious is that it presumes that you need to have a sorta special knowledge to understand the world and your own fucked up position within capitalism. That knowledge is usually expressed under the guise of academic discourse, activist rhetoric, or general radical politics. And we personally do not feel that’s necessary or true ... that you need this sort of special knowledge to be someone that wants to fight against the very society you find all around you, or even in your home. So we think it’s ultimately a term that may have certain currency nowadays, but we don’t think it’s a useful term. We think it’s mainly a way for people that have been recently “radicalized” to shame those who have not heard the Good Word. As the Situationist International once said, “our ideas are in the heads of everyone.” This doesn’t mean that everyone is a situationist, but that the SI recognized that they are not very special and that the task of the pro-revolutionary is not to spark revolt but rather to aid it on its way (cause it’s gonna pop off with or without your “consciousness”); that this revolt is latent with the very contradiction of capitalism itself. You know what Marx and Engels said back in 1848: “What the bourgeoisie therefore produces, above all, are its own grave-diggers.” “Woke” hasn’t ever meant a super lot to us because we grew up nervous, distrustful, and anxious about everyone and everything. No one needs to be told that living under capitalism is shitty. It’s not a question about “correctly” understanding this on some abstract level, it’s about our own irl experiences of this shittiness. It’s felt, it’s visceral, it’s material. Anyone who feels their politics is “raising” consciousness is patronizing and out of touch with the structural conditions of contemporary capitalism. We grew up as prey animals and always kept one eye open. We have been and are always critical of everything, everyone, ourselves, “intellectuals” and academics, devil’s advocates, we’re hyper aware and you can’t bullshit a bullshitter. Like Marx once said, our anti-politics here refers to a “ruthless criticism of all that exists.” WE CAN’T BE WOKE BECAUSE WE NEVER SLEPT ON ANYTHING. Real talk. But we want to listen to everyone’s struggles and pain, pressures and anxieties, feelings and little joys, we want to hear everything.

As far as co-conspirators: right now the core of the crew is pretty much just a group of homies but we have all kinds of amazing connects in L.A. we want to build on. Hopefully as soon as shit starts to crack we can find more and more down people we don’t know yet. But to be honest, a part of the strength of this crew is that it’s not just (anti)political affinities that bring us together. There’s something to be said about just being homies first ... Everything else sort of just falls into place. 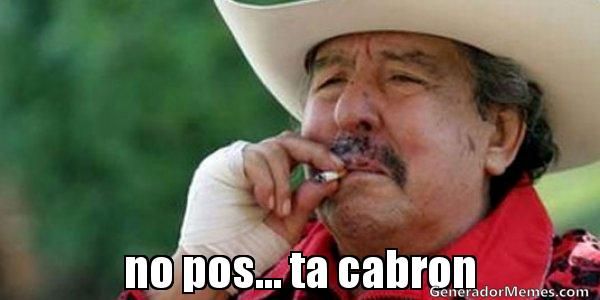 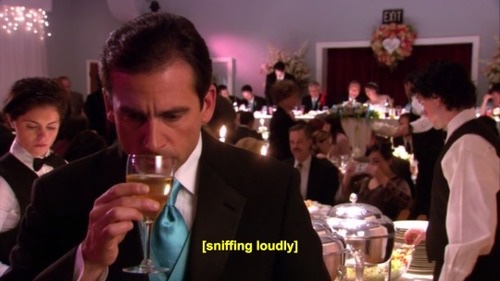 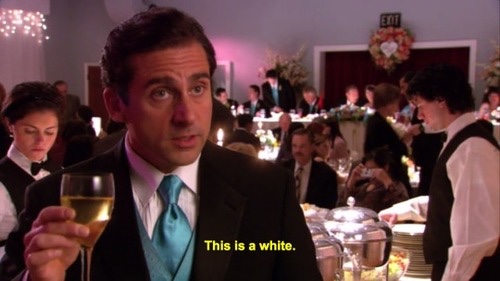 Anything else you wanna say?

Down peeps need to stop fucking exclusively with that academic and activist milieu. Get with down friends and make shit crack. It takes time and effort but how else we gonna do this? Please don’t move to L.A. like the way people used to move to the Bay Area. Don’t need no radical transplants.