The False Sisterhoods of Tech Industry #Girlsquads Sexism in the tech industry will not be resolved by the forced intimacy of idealized female friendship. 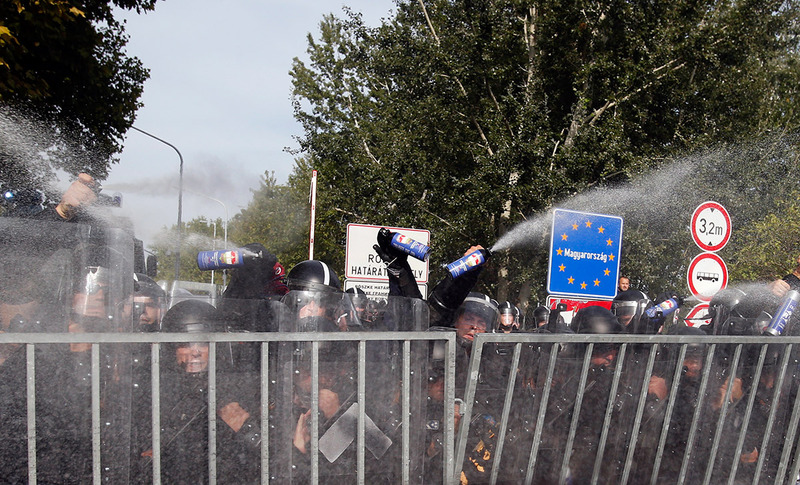 On September 16, Hungarian cops fired tear gas and water cannons at refugees on the Hungary-Serbia border on September 16. Refugees were attempting to break through a razor-wire fence at the Roszke/Horgos crossing after Hungary passed new restrictions on which refugees would be allowed entry. The Hungarian police force has arrested hundreds of refugees trying to make their way to Germany since the new restrictions were set up.

On September 17, Greek police arrested nine people, including six minors, after more than 100 anarchists threw Molotov cocktails at the police precinct in Exarchia, an anarchist neighborhood in central Athens. The anarchists began throwing the Molotovs at the precinct after a nearby anti-racist rally had finished. After the police had handcuffed the minors, they “mercilessly” beat and stomped on them. One of the minors got their teeth broken, another got their shoulder injured, and a 17-year-old’s eye was severely bruised from the beatings. The youngest arrestee was 13 years old and ended up with both of his arms broken.

On September 13, eight Mexican tourists along with their Egyptian guides were gunned down at a picnic near Bahariya, Egypt after Egyptian military and police forces mistook them for Islamist militants. Egypt’s Interior Ministry has blamed the tourists for their own deaths saying that they entered a banned area where an Islamist militant camp was located. Friends of the tour guide insist that the tourists had stuck to the tourist route, moved through several police checkpoints, and even had a police tourguide. On September 16, the Egyptian government decided to ban news coverage of the killings until an investigation is done.

Turkish police lifted a curfew on the Kurdish city of Cizre on September 12 after blocking all entry and exit to the city for nine days and killing at least 20 civilians, according to Kurdish sources. Turkish sources claim that more than 30 were killed  and that almost all of them were Kurdish militants. Turkish authorities claimed they were trying to drive  the PKK out of the city. With the power, water, and internet connection shut off and a curfew in place, many of the injured were unable to make it to a hospital. On the fourth day of the curfew, Turkish cops killed 10-year-old Cemile Cagirga, and her mother was forced to keep her corpse in the fridge until the curfew ended. Protests staged in other cities in solidarity with Cizre were also brutally repressed by Turkish cops. The curfew was lifted temporarily for people to gather their dead, reinstated on September 13 for 12 hours, and then lifted again on September 14. A 36-hour curfew was also lifted in the Kurdish city of Diyarbakir on Monday as well. During that curfew, cops brutally repressed protests by young people, firing water cannons and live ammo at them.

Back in the USA, more than 835 people have been murdered by cops this year, including 19-year-old Anthony Camacho who was run over by a cop who didn’t have his lights or siren on at the time.