This Week in ACAB: Police Officer Shoots His Own Car and Lies About It

Try Turning It off and Then on Again This month we turn to the Hacker for inspiration. 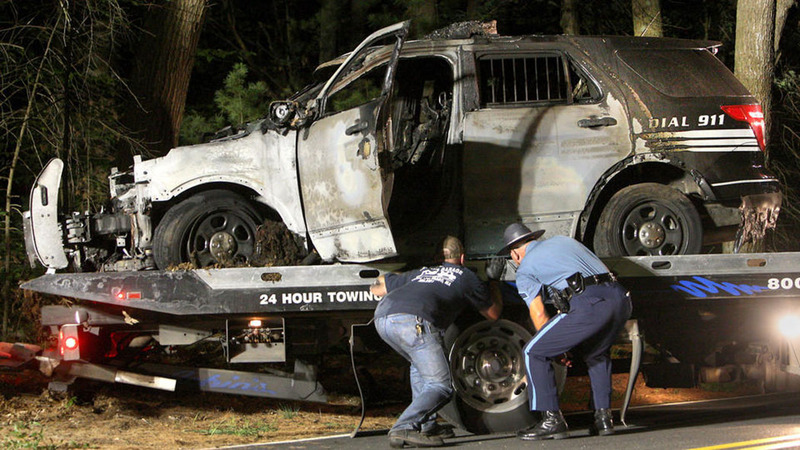 Police Officer Shoots His Own Car and Lies About It

This week, cops in the USA scare-mongered about a non-existent “War on Cops” despite less cops being killed this year than last year.

In Millis, Massachusetts, on September 2, Officer Bryan Johnson claimed that a white man in a dark pick-up truck shot at him causing him to lose control of his patrol car, crash into a tree, and catch fire. Johnson says he shot back and then reported the incident. The town was then shut down for six hours as multiple law enforcement agencies searched for the mythological shooter. They later found out that the whole story was made-up and that Johnson had, in fact, shot his own car. He’s been fired and is now facing multiple charges. As to the motivation, cops claim they don’t know why Johnson did what he did, and local officials have been keeping their mouths shut.

On September 1, NYPD Commissioner Bill Bratton said on MSNBC’s Morning Joe program that he had read former Senator Daniel Patrick Moynihan’s 1965 study “The Negro Family: The Case For National Action” recently. Essentially, the study blamed black culture and the disintegration of the nuclear family for the social ills plaguing the black community. Bratton called this example of pseudo-scientific victim-blaming “prescient.” And despite announcing that NYC had the safest summer in 25 years, Bratton made sure to emphasize that problems remained “centered in communities of color.” Later on, Bratton blamed the absence of black fathers on “over-incarceration” in the 1990s, not mentioning the fact that he served as NYPD Commissioner from 1994-1996.

On August 29, the NYPD killed bystander 61-year-old Felix Kumi in Mount Vernon while they were shooting at a fleeing 37-year-old, Alvin Smothers, during an undercover gun bust. Smothers’ gun turned out to be fake, but the NYPD still ended up successfully destroying at least two black families.

Outside of the US, in the Kobanê neighborhood of Şırnak's Silopi, 20-year-old Ali Ödük, 22-year-old Halil Can, and another unidentified youth were killed by Turkish police on August 30 as they sought refuge inside a house during clashes between Kurdish forces and the cops. While the three men hid inside the home around 2:00 am, police fired shots into the house. In Ankara on September 3, Ahmet Şahbaz, the police officer who was caught on video shooting activist Ethem Sarısülük in the head during the Gezi Park protests in 2013, was ordered by a judge to be discharged from prison. Originally sentenced to seven years and nine months, Şahbaz was released, according to his lawyer, “on the grounds that the evidence had been destroyed.”

In Nepal, police killed five people on September 1 – four in Birjung and one in Kalaiya – during protests by ethnic minorities against the country’s new constitution.

Back in the USA, the cops have killed more than 785 people this year including 18-year-old Nicholas Dyksma in Georgia and 18-year-old Tyree Crawford in New Jersey.