Check out this Bash Back! inspired bomber I can think of a couple kids who would love to their hands on this one. 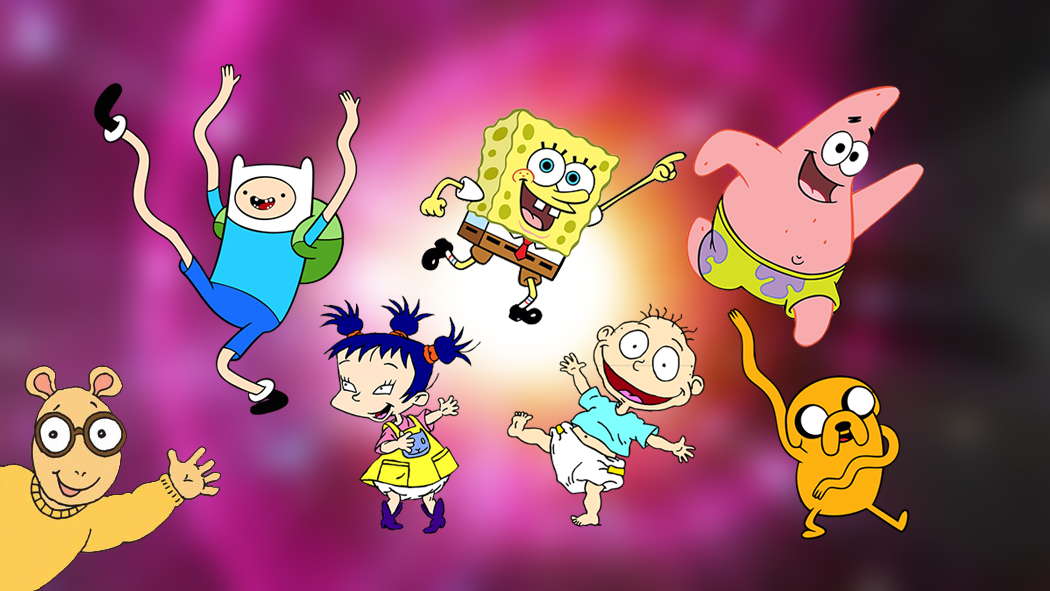 After switching to they/them, 90s baby cartoons like Rugrats helped me figure out who to be.

I used to be a “tomboy.” I wasn’t trying to, it was just what people called me. I wore orange cargo pants, loved soccer and playing Mario Kart with Harris, my only friend. The summer I was twelve, I went through a growth spurt and lost weight. A bunkmate watched approvingly as I belted now-loose cargo shorts. “You’re skinny,” she told me, “now you’re a girl.”

I had a crush on her. I’d be a girl if she wanted. And so, Aries-style, I trust-fell into femme-hood, hoping that, if I was a skinny, pretty girl, then my femme friends wouldn’t hook up with their boy crushes – they’d hook up with me.

It didn’t happen. I was in the closet, and I made a bad girl. I couldn't fit the role. I couldn’t enjoy the things that made my femme friends feel empowered and loved – sex, clothes, friendship, any kind of social interaction. It felt like a game that I didn’t know how to play. I just knew that I was fucking up. I developed debilitating anxiety, and – because skinniness seemed like the key to femme-hood – an eating disorder as well. My favorite things in high school were running outside in winter, losing weight, and baths.

After I switched to they/them, I spent a month memeing a screenshot of Tommy Pickles, the cute baby boy in the 90s animated TV series Rugrats. I found the screenshot after taking a Clickhole quiz, which, upon completion, rewarded me with a pic of “brave and kindhearted” Tommy. He transformed into what they call “a hulking, muscle-bound behemoth ... the brave baby’s biceps throbbing beautifully.” A baby, but beefy. Hot. Visible six-pack lines beneath the signature light blue T-shirt.

I was never into Rugrats. The bellybutton lint eating grossed me out. But, as I tried to figure how to be non-binary, baby Tommy promised an ideal of non-toxic masculinity: a helpful friend, coltish with an unselfconscious tubby paunch. He wasn’t special, just too young to be socialized into “manhood” and assume the role of a patriarch. In another favorite screengrab, titled “Tommy and Kimi play with laundry” on the Rugrats fandom site, Tommy stands in front of a laundry basket, cheering at a grey t-shirt that floats in front of a screen door. I wanted Tommy’s crop top, but I also wanted his innocence – the fiction that you could be masculine without being a total jerk. 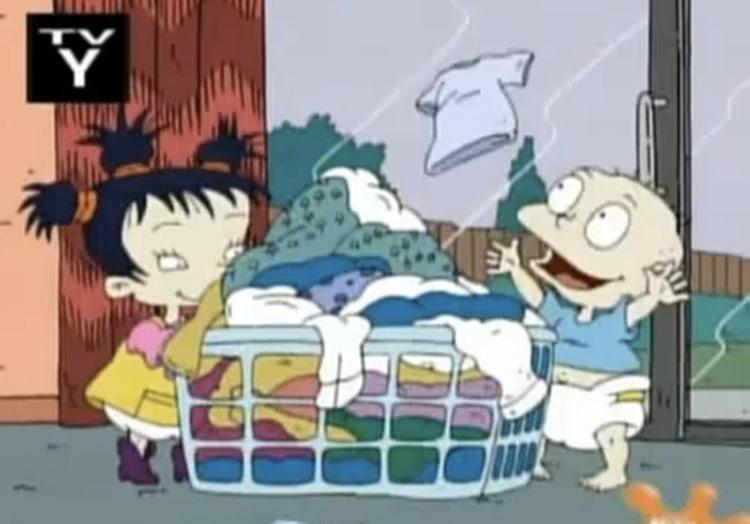 Every trans person has a different relationship to their closeted self. When I learned I could call the old me my “dead self” – that I could bury and flee a gendered selfhood that, for decades, felt like pain – I was overjoyed. Cis narratives often stress continuity and the value of retaining your past. But pasts aren’t for everyone. I started dating my age post-transition. A month after coming out, I was one month old. Like Tommy Pickles, I was newborn and obsessed with infancy. I liked my baby self. It was the self that wanted to live.

Luckily, it was summer 2016 and 90s nostalgia was still surging online. In response to a well-known post by Tumblr user eyebrowgod, Tumblr users alice-rabbit and fakenasty describe 90s nostalgia as a yearning for our technological childhood:

“Our childhood wasn’t even technology based. We grew up knowing of chalk, skateboards, jump rope ... Our parents were of non-tech and our children/young siblings will be all tech.”

They argue that tech nostalgia is enmeshed with economic nostalgia as well. Tumblr user breelandwalker continues:

“Ours was the last generation that grew up with all those bright promises of ‘work hard, go to college, and you’ll have successful life,’ only to find those hopes abruptly dashed when the housing bubble burst. Millennials have grown up expecting that disappointment.”

Compared to the belligerent middle-class whiteness and cis/straight-pride of 80s shows that touted “family values,” like Full House, Growing Pains, and Family Ties, the most frequently memed 90s cartoon characters could come off as being ambiguously racialized and gendered. Arthur, Francine, and DW are all dark-skinned; non-human characters like Spongebob and Patrick are often cast as more than friends, and not very cis. Because their bodies are imagined, utopic, and because they are kids, these cartoon characters are models of an existence without the pressures of our shitty world, whose unrealistic expectations (such as perfect mental health) set us up to fail, then punish us for not measuring up. 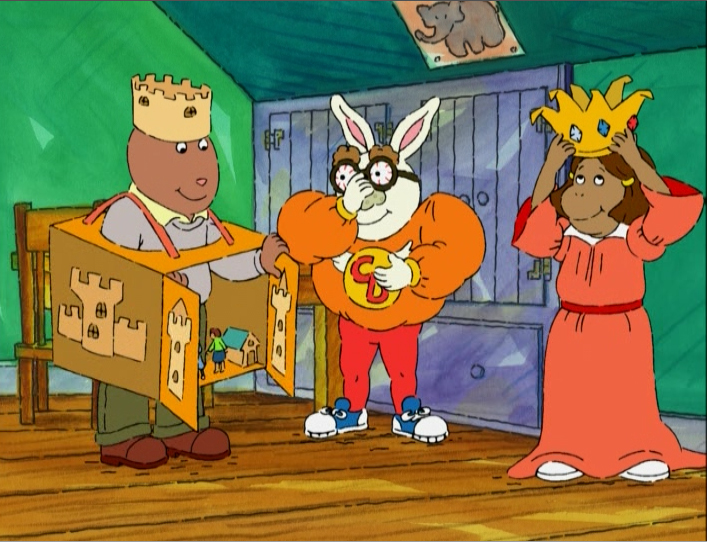 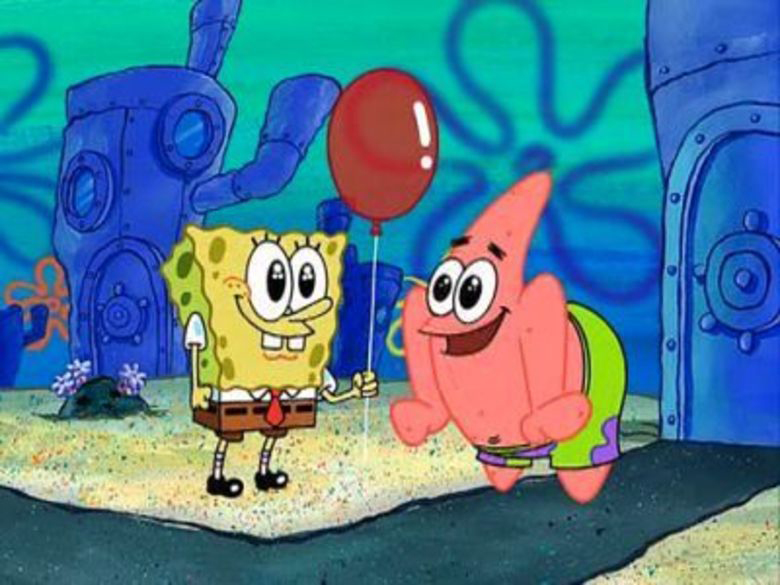 The first crack in my second boyhood occurred while watching Neon Genesis Evangelion. In the opening theme, someone sings: “Like an angel who has forsaken sympathy, rise up, young boy!” I wanted to be the young boy. Its hero, Shinji, is recruited by his father to work for a CIA-like group called NERV, whose teen pilots operate bio-robots against earth-destroying enemies. Piloting is difficult. The machine sometimes breaks and hurts Shinji, who swings between abhorring his mission to relishing the chance to be powerful and cruel. But while NGE goes out of its way to sympathize with Shinji, it takes special, self-righteous pleasure in his sexism. Shinji constantly mocks Misato, NERV COO and unofficial, unpaid mother/shrink, who houses and feeds him for free. NGE’s remaining heroines – Rei and Asuka – neatly bifurcate the saint/whore trope, and Shinji treats them as such.

As I watched, I felt increasingly weird about what it meant to “want to be Shinji.” Was being non-binary just an excuse to be a patriarch, to absorb and enact the sexist norms that I’d always claimed to hate? Shinji and Tommy were young, but they were also cis dudes. Even identifying with infancy divorced from gender felt strained. While the injunction to “grow up” is often an ableist excuse to ignore someone’s emotional pain, modeling a gender identity off babyhood felt equally dead-ended. After all, babies grow up. Babyhood doesn't last and an innocent, carefree childhood, thinking of the 90s as a purely awesome time could just be white privilege.

I switched my identification point from babies to their equally sexless adult equivalents: Dads. The Dad bod, the Dad Joke.

“But why?” a friend asked. “Why do you have to reclaim patriarchy? What’s there to even reclaim?”

“Maybe nothing, but that’s dad-like right? You know. #Offbrand.”

“Most of our friends have horrible, toxic dads.”

I stopped after that.

I still don’t know how to suss it out – how to be “more masc” in ways that aren’t just lurching into patriarchy. It feels fake to tell anyone to do their “own thing,” and yet the only way I’ve been able to deal with gender is by trying not to worry about whether what I’m doing is masc. I tell people what my pronouns are and I try not to be a jerk. If this comes from my frustration with tokenistic and corporatized identity models, it also stems from a distrust of the discourse of post-identity, post-representational politics. To quote poet and visual artist Manuel Arturo Abreu,

“Far from engendering a world ‘beyond identity and individuality and thus beyond the reach of commodification,’ digital technology has generated new ways to subsume sociality into the violence of capital. These novel structures of informatic domination are heavily ‘inflected by the values, cultures, power systems, and institutional orders within which it is embedded, showing that post-identity rhetoric only aids the commodification of identity at the expense of the marginalized.”

The false safety of perpetual flux plays out in memes. In her iconic “Poor Meme, Rich Meme,” artist, writer, and curator Aria Dean argues that “while Mr. Krabs may be a widely resonant, or enjoyably absurd, reference for our generation, his barely explicable appearance on the meme scene reeks of an anxiety around the raced human form and a subconscious impulse toward maximizing #relatable-ity toward blurry universalism.” For Dean, the popularity of cartoon memes, divorced from actual human referents, stems from the the familiar liberal appetite for “unproblematic” relations between non-raced bodies, to cash in on whiteness without the itchy psychic reminders of anti-blackness and social death.

While 90s cartoons are supposed to be the toon-pinnacle, my friend L recently introduced me to present day cartoons. We watch Star vs. the Forces of Evil, Steven Universe, Adventure Time. Xe likes the colors of new cartoons better; they're saturated. And while 90s cartoons only hinted at queer characters, kids in newer cartoons are disabled, gay, trans. Xer Insta is a net gallery of TV screenshots, a poem of subtitles, Netflix streamed. Some of the highlights:

L is chronically ill, and, thanks to the medical industrial complex’s unsurprising transphobia, most of xer illness is self-diagnosed and self-treated. Xe spends a lot of time in bed.

Thanks to therapy and meds, my anxiety has lessened. I’m more mobile. I can leave the house, talk to people, eat. I still panic often. I call L. We try to provide t4t support, but at times it is exhausting. People suffering state violence caring for people suffering state violence leads to a negative feedback loop of care work in which the supporters need support to support.

Under such circumstances, a Steven Universe screenshot can help us relate when we don't have energy for emotional care. It can be fun when friendship threatens to devolve into straight-up work. It’s less about cyber utopianism than a slipshod utilitarianism. It’s more about exporting therapy to group chats until mental health care is affordable, decentralized, trans-positive; until emotional care is compensated; ‘til gender either doesn’t exist, or only exists as a source of pleasure, friendship, and glee. 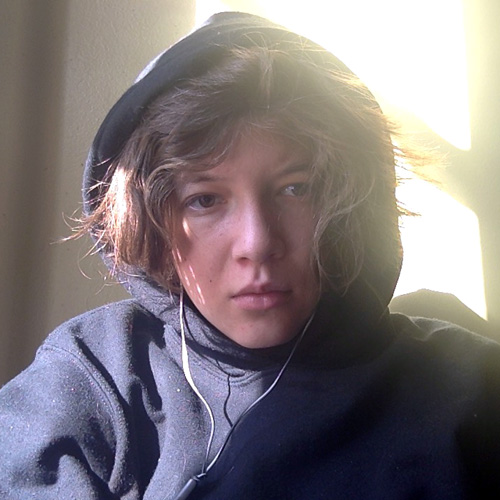