Enter the World of Mojuicy and Friends

The Thin Line between Addiction and Coping A shopping guide for when you quit your job and can no longer afford your coping mechanisms. 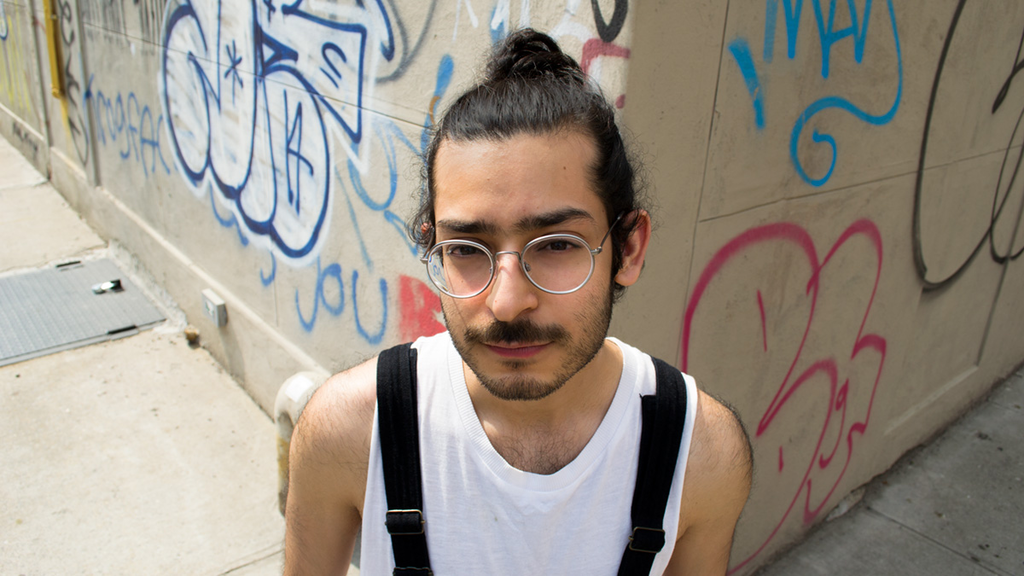 Meet the artist capturing intimacy in all of its complexity

Enter the World of Mojuicy

Raised in Queens, Mohammed Fayaz aka Mojuicy spends his days studying business at the City University of New York’s Baruch campus and working as a full-time freelance artist.

Juggling school projects, churning out emails, sketching artworks in his bedroom/office, and doing the long commute to Manhattan, he seems spectacular at time management. Every month he releases a new illustration that doubles as promotional art for Papi Juice, a Brooklyn-based party celebrating queer men of color which he helps organize.
Did I mention that Mohammed is also represented by the London-based modeling agency Lorde Inc.? You’d think he’d no time for a “life”, but that couldn’t be further from the truth.

Scrolling through Mojuicy’s Instagram, his illustrations and real life photos of him and his friends blend together. You can see for yourself: images of Mohammed and his crew with their arms wrapped around one another in bars, blowing kisses on the sidewalk, or spending quiet moments in front of the mirror. More than anything I’ve encountered, Mojuicy’s art captures a breadth of intimate moments that most would be too scared to post in their feeds. His work is excruciatingly honest in portraying closeness in all of its complexity: withholding, giving, uncontainable joy, and unfathomable pain. More so, the characters he draws – all queer, diasporic, black and brown kids – and the dynamics he imagines them in are so brilliantly familiar. Mojuicy’s striking paintings create celebrity out of the scenes we play out with our friends: heartbreak, loyalty, always being down to throw down together. 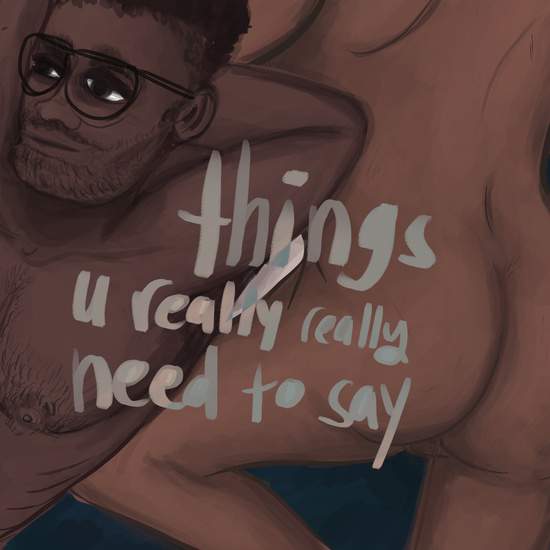 How did you decide to become an artist? I’ve been making art my whole life, but I didn’t start to take it more seriously until the last two years. As I was meeting more queers of color in New York, they would come across my blog and be so surprised that I had this huge catalog of work that I didn’t talk about in everyday conversation; it was just this very well-nurtured hobby of mine. As I started getting some cute paid gigs I’d share them on my feeds. People were excited by the work and things really started to pop off. My intent met the audience it was meant for and it kind of blossomed from there. Now I tell people I’m an artist and an illustrator by profession.

How would you describe your signature artistic style? I think my artwork is really unique. I grew up on American comic books and cartoons, and I definitely see it trickle down in the color and linework of my art. Content-wise I love that my work isn’t so abstract as a lot of contemporary art is. I really thrive on being rooted in the sort of intimacy and tenderness that we know of from our real lives, but glazed in a silliness that I think is key to staying above all the shit we have to put up with every day.

What’s your relationship to the monthly QTPOC party, Papi Juice? Papi Juice was founded by my friends Oscar Nñ and Adam Rhodes, two people who had seen my art in early 2013 before I was putting it out there, and they were were big fans. Papi Juice is a party that celebrates queer and trans people of color, and it didn’t take long before they commissioned me to make art for their promotional flyers. It was my first ever paid gig and it paid me a fat thirty dollars, haha. A few party flyers later, the duo asked me and photographer Cristobal Naranja Guerra to come on board full time. We’re coming up on our two-year anniversary party in June. Doing artwork for Papi Juice was the most organic collaboration ever as I’ve consistently been inspired by this queer/trans people of color community in New York; the artwork fed off the parties, and using my art as the entry point to the party has been a really fantastic use of my talent. Mutual inspiration is the blueprint for how I like to collaborate.

What inspires the characters and scenarios you portray in your work? I like to think that I move about the world in a really peculiar way, and I try to reflect that in my artwork. I think our time on this world is fleeting and the relationships we form with the people in our lives are crucial. I’m inspired and in love with the brilliant creatives I meet in this city, really bright QPOC who are out here doing their thing. There is something so New York about having a dozen huge personalities in a room vibing and shining together – that spills into my work constantly. We’re all hustling and still making time for that intimacy. Intimacy keeps me so grounded and sane. I want my art to portray the tenderness you don’t really see offered to people of color in most media. As a content creator I feel a strong responsibility to depict this tenderness in my work. 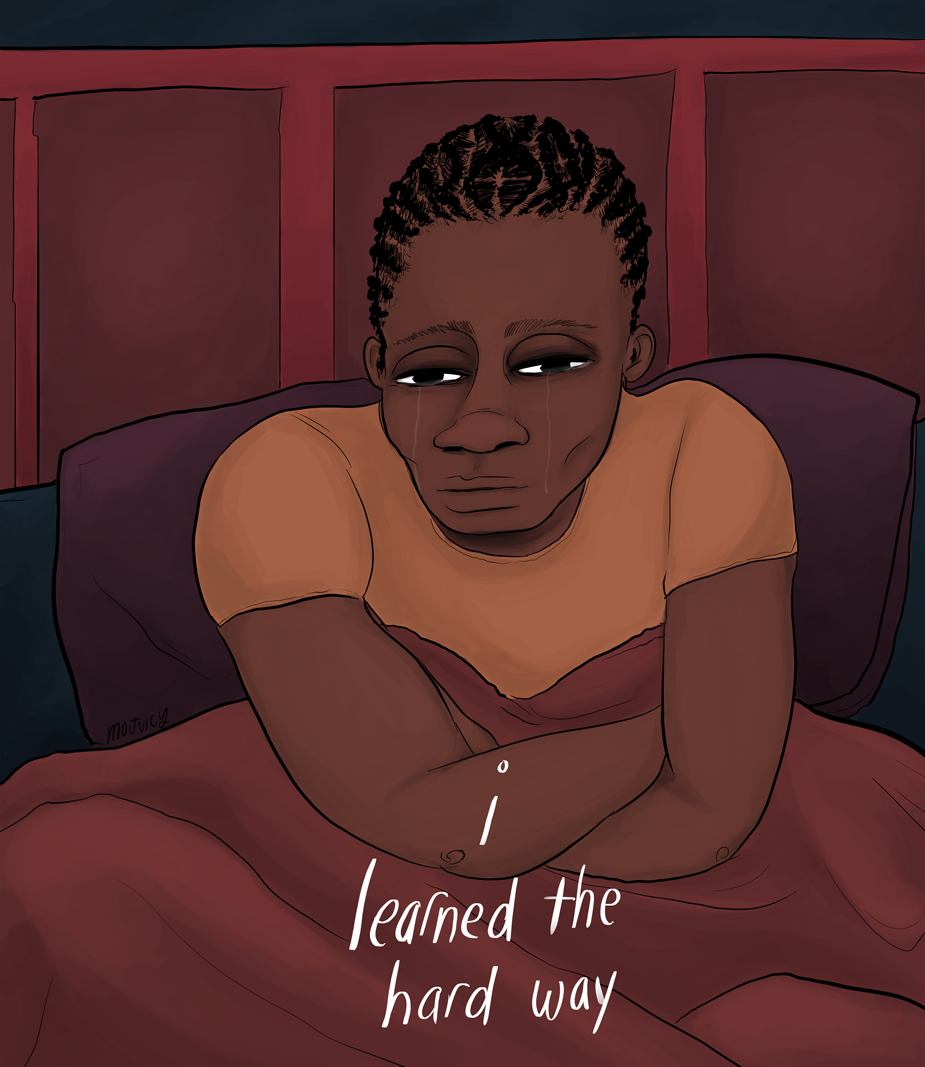 What are some of your dreams for yourself as an artist? A long-term goal of mine is to dive into animation; I feel like my work is just begging to be given that kind of motion and life. I see myself working for an old school 2D animation house in Paris, maybe with a few French Moroccan mini boos. More immediately though I’m hopping in and out of digital media and plan on getting dirty with paint and canvases. I’ve never really invested in art supplies before but it’s something I’m finally experimenting with. I have a million projects in mind and can see playing with physical mediums as one way my style will be able to flourish.

What's the bravest thing you've ever done in your work? There’s one piece that I did for my first gallery show and also recently had printed for a pop up show at the Brooklyn Museum. It’s called “Next Lifetime” and is still one of my all time favorites. I made it after a big break up in the summer of 2014. It comes from such an ugly, lonely, and vulnerable place that I can’t believe I actually finished it, let alone showed it or sell it today. I’ve still never told the homeboy I was thinking of that it’s about him or for him, I don’t know if he’s ever seen it, but putting it out there feels like being naked in public. It’s sweet that it’s well liked but I can’t believe I ever got it out the door.

Is there anything you have coming up that people should look out for? I have a Queens gallery moment in mind for late summer as a shout-out to my hometown, and next week I’m showing some stuff as part of a group show at the Boston Institute of Contemporary Arts!

Next Papi Juice is a fundraiser for the Audre Lorde Project and takes place this Thursday, 6–10 pm at Putnam's Pub & Cooker, 419 Myrtle Ave, Brooklyn. Keep up with Mojuicy on Facebook.