DIY: Make a snapback from a fitted cap in just a few simple steps. 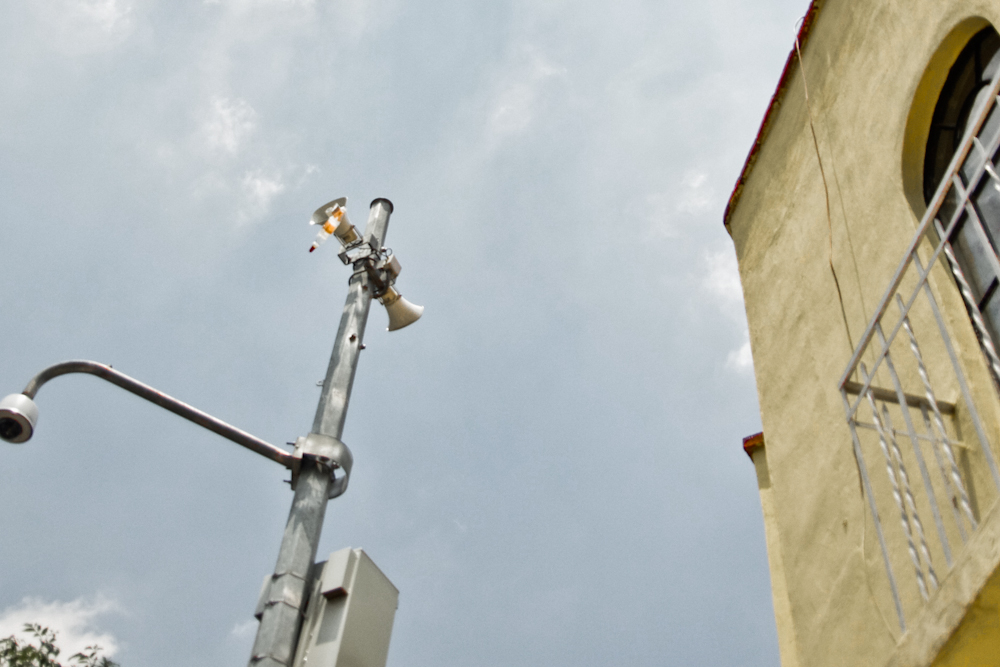 Another White Van across the Street?

Fear and Magic Realism in a Mexico City Social Center

Looking straight into this room – or so it feels – is one of the 7000 surveillance cameras that the government of D.F. (Mexico City) installed to celebrate the 200th anniversary of the War of Independence. Melipona, still a kitten, sleeps on my collarbone, but I have trouble falling asleep because I’m thinking about the lady who came to our poetry event on Friday and told one of us that she’s friends with the cops and can “protect us if we want.” I’m thinking about our neighbor who asked what’s up with the white vans with tinted windows that are now often parked in front of our house. I’m thinking about earlier this week when a woman rang the doorbell early in the morning to tell us her husband had beaten her up and she needed someone to go with her to confront him. She told us her husband is high up in the subway system hierarchy, that he can easily know what she is up to – if not through “his people” then with the help of the surveillance cameras that are now in every train station. People like him are “always watching kids like us,” she said, and that “they know what we are up to” and “where to find us.”

It has been nine months since we turned this house into La Colmena, a mix between a free school, a community center, and a home for around eleven of us at a time, including Melipona. Each of us undoubtedly joined this project for different reasons, but one thing that motivated me was a need to feel a sense of solidarity with and community in the neighborhood where I grew up. Apart from the political ideas and (perhaps unattainable) ideals that informed the structure and activities of La Colmena, I saw in this project a very concrete way to shape the way I experience my hometown. 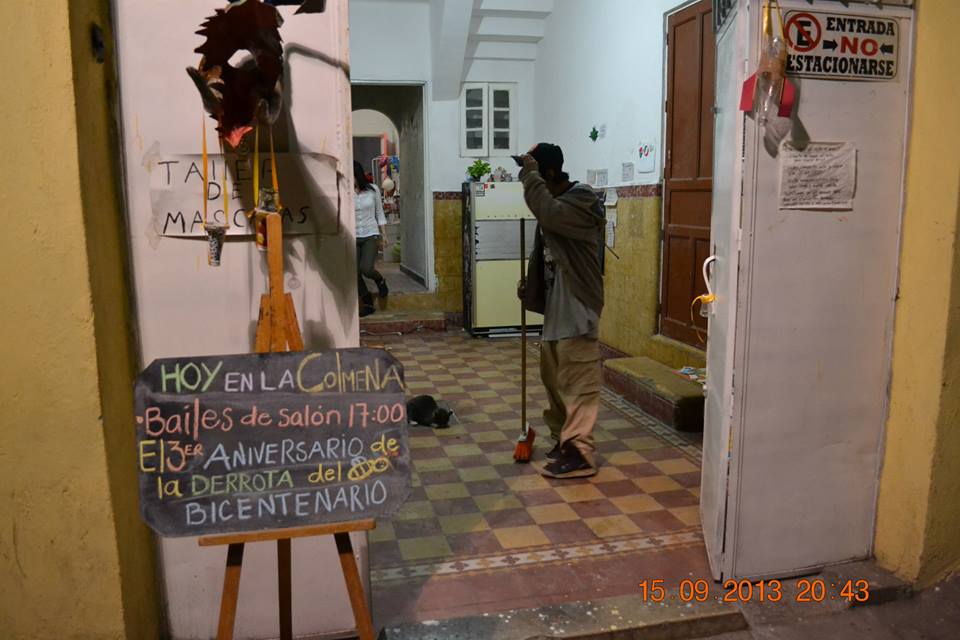 As much as I was able to make my way around the city on my own from quite a young age, I always did so with a certain sense of fear – a fear ingrained in me from a young age. My mom walked me to the school bus every morning, and I could sense her nervousness in the way she looked behind us every few steps. We were mugged once. The guy took twenty pesos, the only money we had on us but, my mom repeated, he also took her ID which had our address on it. A few years later I found out that my mom was sexually assaulted on that same stretch at a different time. I was told I shouldn’t walk alone at night, and my best friend was terrified of taking buses, but I still went back and forth between thinking people were too paranoid and feeling paranoid myself. Regardless of how real or extreme crime is in Mexico City, it affected my life here in very real ways.

A year after the so-called Drug War started I got a scholarship to study abroad. I left Mexico and had the chance to live in more affluent neighborhoods where fear takes other forms. It doesn’t take much for fear to become a normal part of life in a city like D.F. But reading the news about Mexico without actually being there made the problems grow out of proportion in my head. Even more, I started to internalize people’s conceptions of how much violence there is in Mexico. Everybody, here and abroad, seems to have something to say about safety in Mexico. There is too much crime, or not actually that much crime, or less crime than American tourists think there is, or more crime than American tourists think there should be. There was a part of me that feared going back to D.F., and I thought that La Colmena could be at once a place to address the systemic roots of the constant fear and inequality and a space for changing these conditions.

La Colmena has been a great place for us to try our hands at stuff we had only thought of or talked about before. For many of us who live here, this is the first time living away from our parents, for many workshop facilitators the first time teaching, and for many people in the neighborhood the first time interacting with a collectively run space. Even our rooftop garden was built from scratch together with a friend who decided to teach himself hydroponics. We have been trying to create a space that feels welcoming and inspiring, and in many ways we have succeeded; a multitude of workshops, events, and projects have made this their home.

But the fear that I – perhaps unreasonably – thought would slowly dissolve is instead taking on new forms. There’s one kind of fear that’s stirred up very publicly and almost encouraged by the mainstream media, such as fear of being kidnapped, raped, or mugged. And then there’s another kind of fear that isn’t talked about publicly and so can easily feel unwarranted, and that’s fear of police brutality, corruption, and state repression. Only a few days ago a group of about forty people broke into one of the only few squats in the city and beat up the six or seven folks who were sleeping there. The squat was inside UNAM, the National University (if you know Spanish you can read more about it here).

Are we paranoid or simply realistic when we start to wonder why strangers are approaching us with sketchy stories? We want to believe that if anybody is trying to scare us, that’s all there is; perhaps they think it’s easier to paralyze the group with fear than to repress us later if we ever start messing with their interests. But again, regardless of how real or extreme state repression is, it affects us and our activities at La Colmena in very real ways. 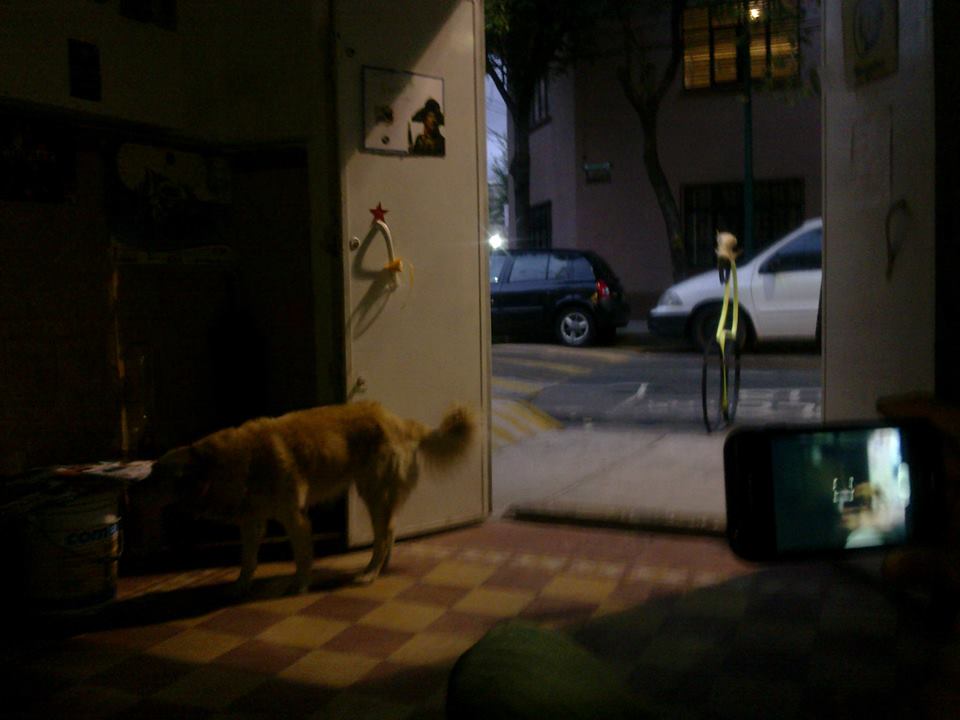 We don’t really know what we need to be afraid of, but it gets very difficult to even talk about what we feel without perpetuating the vicious circle: the more we talk about fear the more present it becomes. Part of me thinks I’m probably already too paranoid for writing this, and even more, that with this article I’m contributing to the very thing I’m criticizing – how much people talk about safety in Mexico and how the fear is all the more powerful because of that. But another part of me knows that while I might be paranoid about our particular situation at La Colmena, the scenario I’m imagining didn’t come out of nowhere.

When our neighbor told our housemate last weekend that she is the ghost of one of the students killed by the Mexican army at the Tlatelolco massacre of ’68, she wasn’t referring to a fictional event, even though I don’t think Laura is actually a ghost. 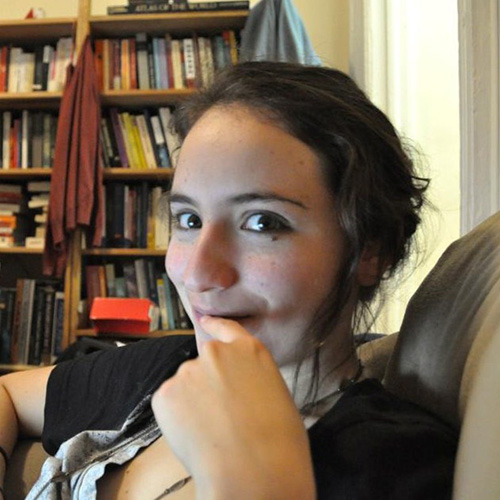 Mariana Roa lives in Mexico City, where she teaches languages, tries to get theatre and music gigs, and feeds on street food and free snacks. She likes to write, translate, and organize for the revolution.