Interview: Former political hostage held in Iran on adjusting to “freedom”, and her renewed struggle against prisons. 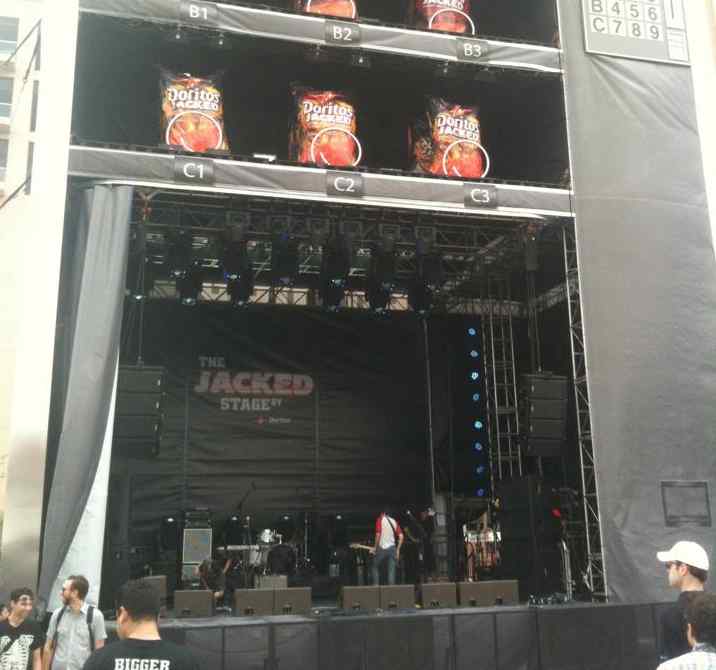 Dorito Stage photo by Ben London, via The Stranger.

The people who make cool for a living are surprisingly insightful

They write all the magazines and blogs I read every day, and thanks to these professional hipsters, my trip to south-by was entirely vicarious. I probably read about 4000 tweets about the music festival in Austin, TX that happened last week. From a distance, SXSW this year seemed like fiasco after tragedy after a whole lot of inappropriate product-placement opportunities ... but the people who are sent to these things to ‘produce content’ provided a surprisingly nuanced perspective, if you read between the lines.

Subjects include: being unsettled by how irritating we are as a generation, waiting in lines as a way of life, old-world sexism still being kind of a thing, a drunk driver killing people, and the strange ennui of being a secret society of cool twenty-somethings that run the entire entertainment industry. Here are some of the highlights:

There is something poetic about the fact that my first SXSW wristband of the year reads "NOBODY SPECIAL."

Shout-out to the bots who autoreply you every time you tweet #SXSW, DM me if you guys know of any cool afterparties.

When it comes to food, there are probably more artisinal whatevers per capita than anywhere else in the country. That’s why I thought BRENMAR was on point here, at least as far as I’m concerned:

The triviality of American youth is like the rising sea-level. Eventually, most of us will be underwater because none of us are about to move inland:

The year is 2014 and the white girls show no sign of stopping the hardcore twerking :/

Looking forward to the “Hey Girl // Dick Card” Ryan Gosling meme that will (hopefully) follow this tweet by Sasha Hecht:

"Cool staffer" with the sideburns and backwards sunglasses at P4K apologizing for "shuffling the dick deck and playing the dick card" ok.

Even if you’re counting cards, the house has the advantage.

RT if you accidentally spilled all your antidepressants out of your bag in the middle of Pitchfork VIP.

Tyler the Creator got arrested for inciting a riot. Why? Who knows. Fuck the police.

You’d think that someone would eventually realize that it’s probably a bad idea to pepper spray an entire generation. Have you been pepper sprayed? Yeah, me too. What the fuck?

Sxsw is not that tight

For real though, it seems like the Rashad Owens incident (rightly) hung over the entire week, bringing the banality of the spectacle to the fore, as attention-hungry brands, the worst aspects of youth culture, and the institution of ‘cool’ all work in concert to make life so difficult to celebrate.

If you see me crying at Mark Kozelek tonight, please keep in mind that my tears are partially sponsored by Doritos. #bold

Yes, this is thankless work, but someone has to do it.

I’m pretty sure this is the hipster equivalent of nailing ninety-five theses to a door:

waiting in line for bands that don't exist

Something something penance and absolution and financial transactions or whatever.

sext: im homeless in austin tonight but i have three hi-chews left to share

If you don’t have to talk yourself out of shoplifting a pack of Hi-Chews every time you see them, you probably haven’t had them.

Is "are you from New York?" the polite way to ask someone about their resting-bitch face?

Yes, I believe it is. The correct reply is: “Um, what was your name again?”

Honestly, I don’t know what I would do if cool people didn’t tweet. A sincere thanks to the people who actually do this stuff for a living. Maybe next year I’ll get to complain about being at SXSW. #crossmyfingers

Sorry to anyone I didn't get to hang with at SXSW. It was all such a blur that I didn't even find the time to eat a single Dorito.