London Protests Against Tuition Hikes Brutally Repressed by the Police

The Life of a Tinder Muse Swipe right to unlock an exhibitionist archive.

Making Yourself at Home Maybe don’t beat your chest about how you “settled” Brooklyn. Maybe don’t call everything you find mildly distasteful or inconvenient “ghetto.” 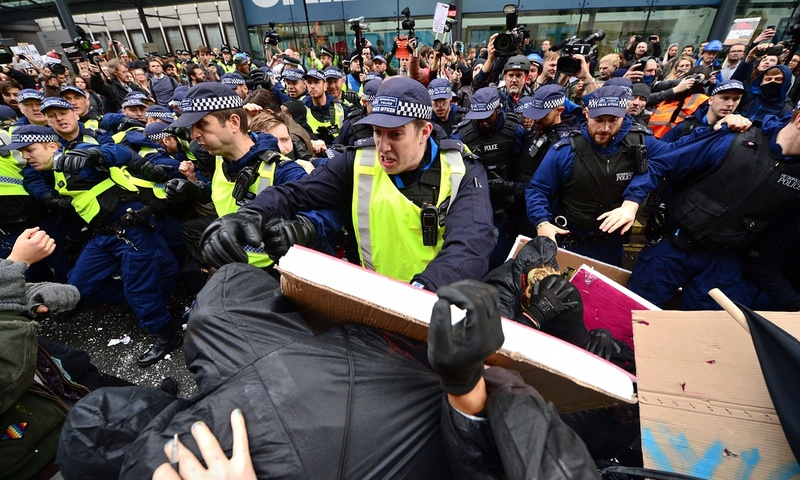 London Protests Against Tuition Hikes Brutally Repressed by the Police

On November 3 in Porto Pino, located on the Italian island of Sardinia, hundreds of anti-war protesters arrived to march to the Teulada military shooting range where NATO was conducting war games as part of Trident Juncture, the biggest NATO military exercise in over a decade. Two days earlier, the police said that the demonstration would not be allowed and deployed hundreds of cops to prevent protesters from entering the shooting range. Cops set up road blocks around Porto Pino, halted numerous busses, conducted unreasonable searches, and detained multiple people. Nonetheless, the protesters still kept coming and began marching. Cops continued their repression of the protest, spraying tear gas at protesters before threatening them with arrest. The protesters continued, finally making it to the range where at least 16 protesters cut a hole in the fence and entered the range. Cops and soldiers then stopped the protesters from moving further, spraying more tear gas and brutally beating many of the protesters.

Last week in Spain, in a continuation of well-known anti-anarchist police operations, private homes and anarchist social spaces in Barcelona and Manresa were raided by Catalan police, and nine anarchists were arrested for supposedly “belonging to a criminal organization with terrorist aims.” Eight of those nine were released on bail, but Enrique Costoya Allegue remains locked up. On November 4, the police raided yet another home and arrested five members of the Straight Edge Madrid collective. They were also charged with belonging to a terrorist group, and police claim that they have confiscated materials for making bombs.

On November 4 in London, thousands of students protested in support of free education after the government proposed raising tuition fees and scrapping University maintenance grants for lower income students. Students marched past parliament and ended the protest in front of the government agency in charge of universities. Throughout the whole march, the police kettled, beat, and arrested numerous protesters. Protesters, particularly the black bloc, defended themselves as best as they could, even throwing paint and eggs at police. By the end of the day, 12 protesters in all were arrested for “public order offenses.”

#GrantsNotDebt protesters break out of kettle. Police try to keep up but give up. Firecrackers going off @NCAFC_UK pic.twitter.com/rO2nEgajQ5

On November 1 in the USA, the Associated Press reported that they “uncovered 1,000 officers who lost their badges in a six-year period” for a variety of sex-related crimes including rape, sodomy, and child pornography. As activist Keegan Stephan pointed out on Twitter, this amounts to a cop being fired for some kind of sexual misconduct every other day. This number excludes California and New York, and some of the states who provided their records “reported no officers removed for sexual misdeeds even though cases were identified via news stories or court records.” Some police chiefs even admitted that many departments keep sexual misconduct cases on the hush in order to “limit liability, allowing bad officers to quietly resign, keep their certification and sometimes jump to other jobs.”

Along with all of that, at least three cops have shot themselves and blamed anti-cop criminals since September, including Fox Lake cop Lt. Charles “GI Joe” Gliniewicz who, after years of stealing money from his own department’s youth program and spending the money on pornography, vacations, and gym memberships, killed himself and made it look like a homicide.

Over 965 people have been killed by cops this year in the USA including 6-year-old Jeremy Mardis who was shot five times inside his father’s car during a chase. No gun was ever found in the car.