RIOT, a Radical Queer Pride Fantasy by Culture Whore and David Sokolowski is an alternative pride party aimed to shake people out of complacency and embrace Pride's riotous roots. 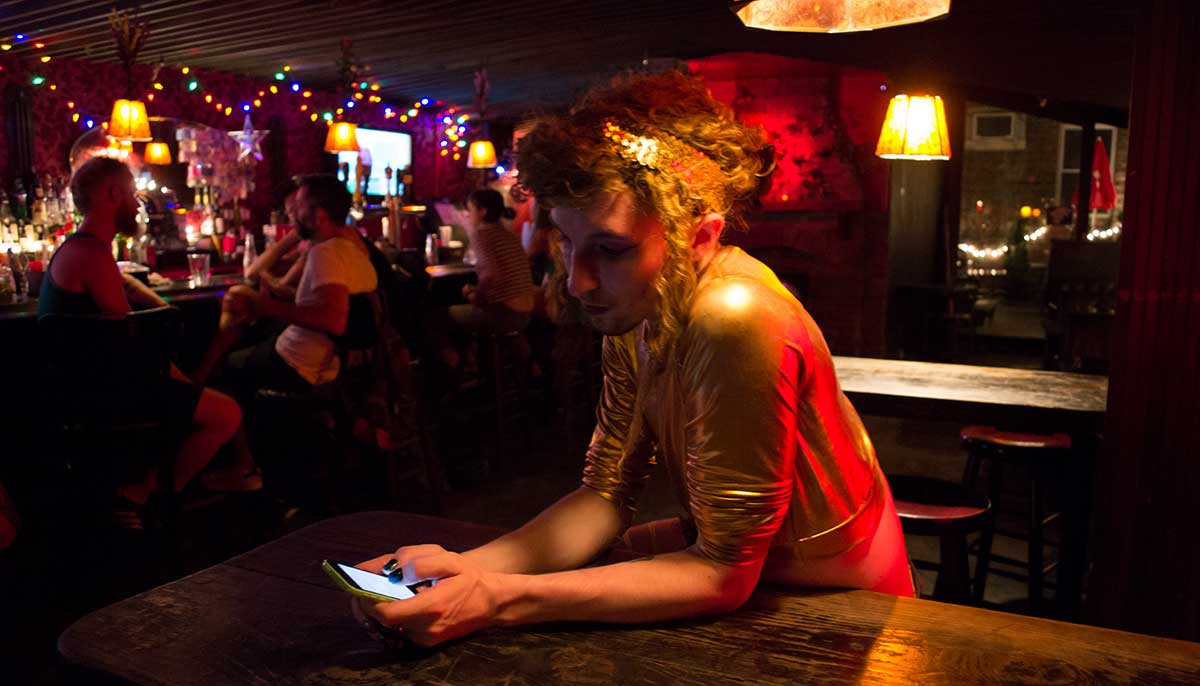 With many lovers, it gets complicated. But perhaps that’s the only way to love.

I don’t know why I didn’t just say “I want to break up with you.” It would have made more sense. Instead I gave her an explication of my mental instabilities and some half-truth about how boundaries would bring us closer together. We were sitting on a park bench. I was staring up at the trees, trying to find a synonym for “deserve,” when she got the phone call that her father had died. I folded in on myself. When she finished she shoved her phone in her pocket and asked me what I was talking about. I tried to apologize but she cut me off. “Actually, never mind,” she said. “We’ll talk when I get back.”

I’d met her at a party two months earlier. We were shrooming and I asked her back to my house. I remember her body on a bare mattress, her hair fanned out above her head like a delta. I sketched her on newsprint and peering over the edge of the drawing board I asked her if she thought it was problematic to fuck your muse. She told me it was fine, because all men in the art world fuck their muses.

She left the park and got in her car. I watched her speed off, pondering her pastiche of left-leaning bumper stickers. On my way home I felt my phone buzz. A text:

Bert used to drive me out to the golf course on Tuesdays. I’d carry his clubs around the green and applaud him on any shot I guessed might be good. Then he’d rim me in his car. Afterward we’d go to the bar. He’d sip coffee, buy me whiskey sodas and Doritos. All I had to do was listen to him talk about the Korean War. Occasionally he’d slide his hand under my shirt. Then I’d ask him to throw in a roll of quarters for the Tekken machine. By 10PM he’d kiss me on the forehead and leave. Bert was my last client before I gave up hooking. I’d gotten a job at an AIDS hospice counting pills and used this as an excuse to start dating again. I’d learned that “I’m a sex worker” was an intriguing line for a first date, but that it didn’t get me laid nearly as often as “I work in Healthcare.”

Bert did not know how to text, nor did he have a cell phone. He called me on his landline and used Manhunt to find hookups when I was busy. That night, waiting for him on my porch, I got a text from the Boy:

“Movie” was codeword for “fuck.” I’d never known the Boy to stay awake for a whole movie. He was the type that would fall asleep immediately after coming and sometimes, if it was late enough, with my hand still up his ass. The thought of it made me hard. When Bert pulled up to my house he caught me with my hands down my pants.

When the Girl returned, four days later, we planned a dinner. She made a taco casserole, served it with box wine, and had very little to say about the funeral aside from the fact that sandwiches were served. After we finished eating I ventured to ask her how she was feeling. “I don’t feel anything,” she said tersely. She looked down at her plate, pushing a wedge of tortilla through some enchilada sauce. “Gem is coming over,” she said vacantly.

At that point I was unaware if the Girl knew that Gem and I had fucked. It had happened before I met the Boy. Gem came over to my house on my birthday, weaseled into my room and cut up a line of molly on my nightstand. When I found her she was reclining on my pillows with her skirt raised almost a cubit above her peach colored knees. The following morning I gave her my number, but she never returned any of my texts. Occasionally I’d see her at the bar while I was with Bert. He’d be stroking my cheek with the back of his hand, telling me what a sucker he was for a flat stomach, and she’d stumble in, hiding a handle (somehow) in her impressive overcoat.

When Gem walked into the Girl’s apartment, her overcoat produced a vodka soda. She’d apparently taken it from a bar somewhere. She tossed her outerwear on the floor and collapsed onto the futon with a sigh, apologizing for ruining our “little date.” The Girl told Gem that we were just finishing up. Gem propped her boots on the arm of my chair. I stood up and began collecting the dishes from the table.

After we’d dealt with the casserole, the three of us decided to hit the bar. It was that time of year when it was still icy at night, but the girls insisted on wearing heels. I trailed behind them. They managed not to fall, but slipped around on the sidewalks, clutching each other and giggling. I’d never seen either of them laugh that way around me. When they touched I could feel my lips purse, my thumbs rub my palms, my brows furl. Later I would discover that they had been lovers, long before I ever entered the picture.

When we entered the bar they were greeted by an entourage of people I vaguely knew from hazy nights of drinking. Someone pulled out a bag of drugs and everyone scurried away. I stood there for a moment, gazing off. Suddenly I longed for Bert, the professionalism of our relationship. I ambled over to the Tekken machine and sat in it’s pale blue light, muttering hatefully. Then I felt a tap on my shoulder. It was the Boy. He was wearing a cat sweater and brass rimmed glasses with an ostentatious brow bar. “Wanna go fool around?” he asked, grinning. I told him I wanted to, but that I couldn’t leave the Girl alone. He sighed, looking at a wall. Then he said “sharing you is really becoming a challenge for me.” I froze.

I’ve heard the polyamorous lover described to me as an antiquated 70s swinger, bouncing from one lover to the next. I’ve also heard it described as a cool master of romantic possessiveness, a person who freely communicates their needs to the one with whom they’ve formed a fluid bond. Both those figures assume a certain degree of agency. For me, back then, polyamory was a performance of stuckness. It was a way of loving, but more than that it was a record of how I couldn’t learn to love any other way.

Later that night, the girl and I took a bath together. I told her how that day in the park I’d meant to break up with her. I told her I couldn’t be with her anymore, that it was too much. She calmly lit a joint and said she didn’t care. “You deserve someone more stable,” I said. She laughed and told me to fuck off. “I made a choice to be with you,” she said, “don’t insult me.” I apologized, told her I was just expressing a feeling. She got out of the bath and stepped onto my towel. “Poor timing” she replied, slinking down the hall to bed.