July Horoscopes by Corina Dross: With a mess of planets in Cancer this month, prepare yourself for homesickness and questions of belonging.

On Polydrama — With many lovers, it gets complicated. But sometimes it’s the only way to love. 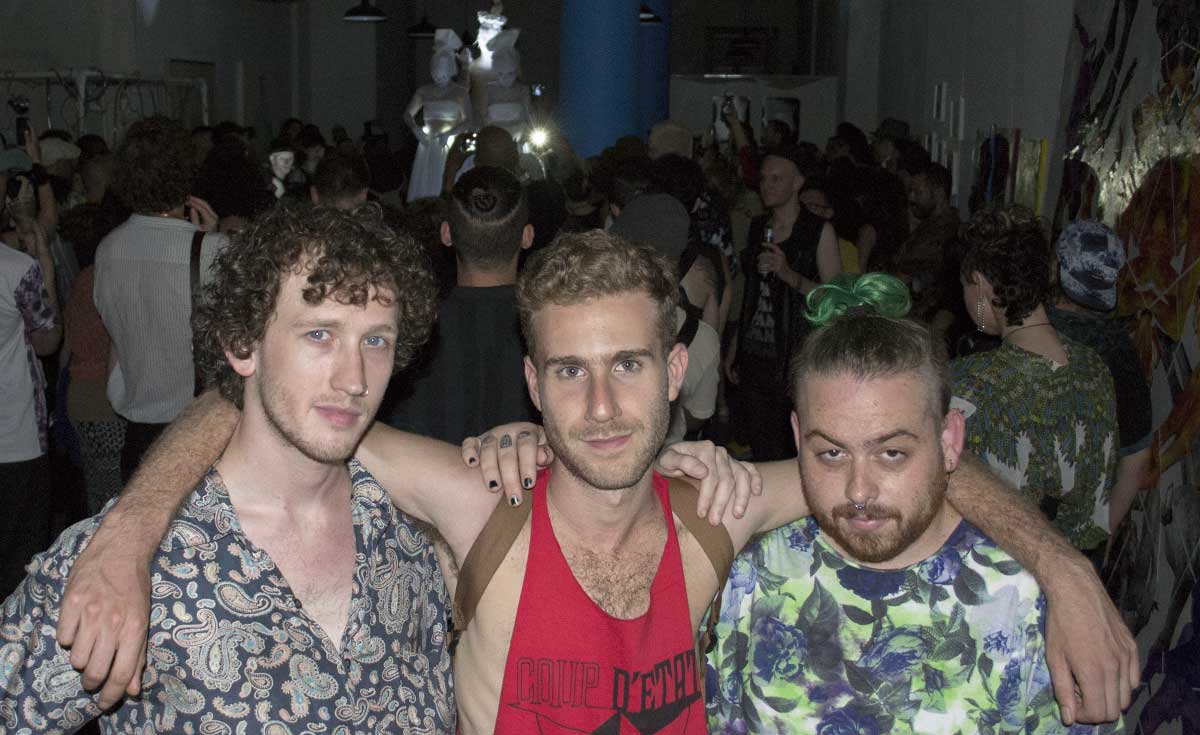 A conversation with Dream Dommu and Paul Leopold of The Culture Whore about new currents in Brooklyn’s queer community and nightlife.

For many queers, Pride weekend is when you huddle together with your closest friends and complain about what a corporate pink-washing this spectacle has become. The irony of that what started with a riot in 1969 has led to a multinational sponsor-fest in 2014 has not been lost on everyone. Brooklyn artist and event producers Paul Leopold, Dream Dommu, and David Sokolowski decided to do something different this Pride week. Tonight, they are hosting an alternative Pride party called RIOT, a Radical Queer Pride Fantasy at the Ivy House in Brooklyn. We met up at “bARTsch” to talk about tonight's party, the Brooklyn queer scene, and their creative careers.

Yesterday, a few hundred New Yorkers gathered at the Hotel Chelsea Storefront Gallery in Manhattan for Susanne Bartsch’s one-night group exhibition “bARTsch INSPIRATION.” A nightlife legend since the 1980s who played a big role in shaping the culture and ushered many local artists to success, Bartsch has never been afraid to try something new.

The exhibition, which traversed boundaries of gender, bodies, spectatorship, pain and pleasure, the beautiful and the mundane, aspired to be inclusive and transformative beyond some trite assertion of “normalcy.” Unlike the Pride parade, which has been overtaken by corporate sponsors, this was an off-the-grid Pride week event where the audience was part of the exhibition — and played their part with reverence. While I was there I had a chance to chat with Paul and Dream, co-directors of The Culture Whore — the art collective responsible for RIOT and “living magazine” of queer culture and nightlife.

They were high school classmates in West Palm Beach, FL — “God’s waiting room – it’s surrounded by old people,” Dream explains. “We reconnected [in NYC] over the fact that we were hanging out with a lot of straight people,“ Paul continues, “and we didn’t have a lot of gay friends. We went on a mission to find the queer community together.”

They found it, and soon also David Sokolowski, who was brought on as one of the co-producers for RIOT. David is a DJ and event producer who hosts Hot Fruit at Metropolitan Bar every Monday, and was recently recognized as “Promoter of the Year” at the Brooklyn Nightlife Awards.

PAUL “David DJs all of our parties and performs at a lot of them, and he’s one of our best friends. For this particular event, we wanted to bring him in as a co-producer — to make it bigger, and to combine forces.”

The three of them are some of the most active voices in bringing visibility to Brooklyn’s vibrant queer community. I wanted to know how they got started.

DREAM “The Culture Whore started out as a blog. But because of the things we were doing and the things we were interested in, it transitioned into a way of ‘physicalizing’ the community we were a part of. Being part of our community can seem daunting; it can be hard to find an access point. That is what we exist to change. So The Culture Whore has evolved into an art collective and a ‘living magazine’ — it exists in the real world and everything that exists on the internet is a way for people to get involved in what we’re doing in the real world.”

Prior to RIOT, they organized several other themed parties like Dick the Balls, Deep Sea, and their most recent project Sideshow.

PAUL “Sideshow is a way for us to highlight some of the more up-and-coming performers, or just performers whose work isn’t suitable at a 3:00 AM rave. Sideshow starts at 9:00 PM on a weekday night.”

DREAM “We also realized that a part of our audience wasn’t comfortable coming to an all-night rave, but was still interested in what we’re doing. They want something a little more accessible than staying up and raging till 9:00 AM.”

PAUL “We also do a weekly newsletter, called The Week, which comes out every Monday. It lists all the events we’ll be going to that week, as well as events we want to support and highlight in Brooklyn’s underground queer scene.”

DREAM “People always texted us to ask what events were happening that week, so we started putting together a weekly list. Now we just point people to our newsletter. It helped: we don’t really get those texts anymore.”

Over the course of the interview, friends of Dream and Paul drop by to say hi, share a cigarette, wish them good luck. “I’ll see you all tomorrow. I think I’ll be there at like 3:30 ... but I have my look, I just picked it out!” It’s obvious that they are doing something right, that the countless hours they put into organizing successful shows and put on their friends to perform is not going unnoticed by the community. I ask them:

“Over at Mask, we’ve been talking a lot about friendship as nepotism, how cultural influence is rarely the work of one individual; it’s usually a product of groups of friends having each other’s back. It seems like this is something you and your friends take to heart as well?”

PAUL “Oh, definitely. James, who just walked by, is one of the Gay Voices editors at Huffington Post. He’s written a lot about the scene; he has a series called Queer New World and another called After Dark, both of which feature a lot of the people we know and put on.”

Paul, Dream, David, and their friends are part of the dawn of a new era in the nightlife scene. And, even though they are humble about their roles, they take it very seriously. They admire each other’s professionalism and ability to follow through on plans, but their ambition has less to do with work ethic per se, and more to do with a sincere excitement for the culture and the people in it.

PAUL “We definitely see ourselves as leaders of this whole thing. We’re trying to point people in a certain direction, towards empowerment and spirituality.”

DREAM “The scene we’re a part of often gets compared to the club kid scene that happened in the 90s. But what sets us apart from that is an aspiration for a deeper and more transcendent goal than mindlessly getting fucked up. It’s very communal, it’s about connecting with each other and creating something beautiful to change the world toward something better.”

Like the antagonism manifested in pop culture right now, they embrace the reckless. But, they are looking for something more.

PAUL “This whole ‘we’re young so lets just do whatever and get fucked up and not care if we die tomorrow‘ ... there’s an aspect of it that I agree with, but there isn’t really anything deeper to it. What we’re doing is a little different. To us, the rave means something, and has a goal beyond just serving itself. Getting fucked up is a tool to transcendence, not the end-all-be-all.”

DREAM “When looking at pop culture, we try to find its spiritual undercurrent. How is going to the rave like going to the church? To us, it is. We don’t go to church, we go to raves. I have that same feeling of being connected to eternity when I’m in those spaces.”

With RIOT, the trio hope to shake people out of their complacency, remind people of the ongoing fight and visceral rage that queer embodies. Pride started out as a riot, and they want to bring that aspect of it back.

DREAM “A lot of things are wrong, and sometimes the only way to change things is to voice your anger. Everything is not OK yet. We’re not where we need to be in so many ways and we shouldn’t just be happy with what we have, we should be fighting for what we need and want.”

PAUL “A riot is a very visceral thing. We wanted to take all these discussions and ideas that we have and put them into something that’s fueled with emotion and energy.”

The lineup of hosts and performers is impressive, with drag performers like Mr(s) Williamsburg winner Aja, Horrorchata, Chris of Hur, and Merrie Cherry. And at the end, the performances will erupt in a drag queen wrestling.

PAUL “It’s more drag queens than we usually have. But as an alternative pride party that felt important; we wanted it to be looking at and challenging gender a lot.”

The event is a "RIOT, a radical queer pride fantasy", and fantasy obviously plays a big role in the whole project of queer disruption.

PAUL “Yes, it’s not an actual riot. It’s a party. It’s a theme of a party, with which we hope to question some things and explore some things from an artistic perspective. We hope people will be inspired to protest from the party, but we want this to be a safe space, we don’t want anyone to get arrested. We actually had a lot of interesting conversations with people who were upset that this wasn’t more political. We’re doing what we do as party promoters. We’re using the tools that we have at our disposal, and we are people who believe that art has the power to change the world. So we’re doing that.”

DREAM “All of our parties are fantasies, and we wanted our Pride party to be something that was really disruptive and visceral and angry. While developing this party, I could feel the anger in my guts. It’s very human, it’s meat and bones and gore. And that’s also the riot — a bunch of people coming together and using their bodies to disrupt and change something. The same is true for the riot, it is both a performance and a collective fantasy.”