Rebellions and reprisals How outside support can impact the outcome of prison struggles.

Sometimes controlling what one eats can be liberating, a way to discover and manifest the self. Other times it’s an unhealthy symptom of society’s rigid gender norms. Angel Archer meditates on her body as battleground and the metaphysics of not eating.

My parents spanked me as a child. They raised me in an authoritarian new religious movement with terrifying ideas about the world (e.g. Jesus Christ is coming back soon and there is a decent chance he may decide to murder me, a child, with a sword). However, their treatment of me did not typically consist of what I would later understand as abuse in the pathological sense. One exception occurred when I was a teenager. I wasn’t eating. I had been both restricting calories and arbitrarily eliminating common foods from my diet (in some cases using veganism as an excuse). One day my parents noticed that I had not eaten anything aside from a few limes. My father told me I would stunt my growth. I responded, “I hope so,” and he shoved me against a wall, threatening me.

It was corrective. I wasn’t supposed to want a smaller body. My disordered eating and desire to take up less space were both unhealthy manifestations of gender nonconformity. My asceticism and ideas of civil disobedience were both Thoreauvian. I challenged him to hurt me. Masculinity is sadistic; I complied with it by trying to destroy myself.

For most of us, the earliest social interventions in our sexual development are via food and eating. Long before puberty when we develop secondary sexual characteristics, boys receive praise and encouragement to eat food and grow strong, while girls are taught from infancy to conceptualize themselves as romantic accessories subject to patriarchal beauty standards. By age ten, 80 percent of girls have tried dieting. And for children under the age of 15, girls have twice as high a rate of eating disorders as boys. Gender began disciplining my body, however, prior to any of that. The first social intervention in my sexual development that I experienced was intersex genital surgery. It happened for the first time as an infant and multiple more times in early childhood. In either case, society’s production of gender takes an active role in regulating and enforcing the epistemic category of “sex.”

This regulation of sex continues throughout our lives. For instance, other than just diet, I have been on hormone therapy, am pursuing various forms of plastic surgery, et cetera. And that sort of thing isn’t uncommon for anyone in our society, even those of us who aren’t intersex or transsexual. We exaggerate sexual differentiation and often treat deviation from the phenotypical ideal as a problem to be solved. As Patricia Allen and Carolyn Sachs write in Women and Food Chains, “Seventy-five percent of ‘normal’ weight women consider themselves overweight, and 90 percent of women overestimate their body size.” Food labels give me sexual information on how to punish my body. The view that women should take up less space can be measured in units of energy – kilocalories or joules.

In addition to being born with an intersex condition, by the time I was a teen I began experiencing sex dysphoria – developing androgynously, but, to me, the wrong kind of androgynous. From what I have heard from peers, it’s quite common to develop a complex coming of age as a person growing breasts. I easily internalized the perverse mix of of hatred and fetishization it elicited. At the same time, my face and skeletal structure looked ugly and too masculine to me. I constantly felt like jumping out of my skin. My ideal self-image was angelic, a perfect androgyne: slight, delicate frame, flat chest, and a soft, cherubic face. I was terrified that the bodily dissonance I experienced meant I was transsexual. Instead, I came out to my friends variously as bisexual or gay, sublimating my discomfort into transcendental ideals. Like many mystics, for me this meant a kind of mortification of the flesh – punishing my mortal form for its sins with fasting and austerities to strip away anything occluding the higher self.

This absolute self of the mystic is Edenic. For the Romantic, the idea of nature is the Garden – the fullness, environmentally incarnate, preceding class, gender, and society. As a teenager I was longing for an essence within myself that could both be isolated hermetically and bridge the sense of dissonance I experienced with the world. Eden was sexless, meatless, and deathless. I wanted to be like the angel guarding it, so all I wanted to eat was its fruit. The Romantics’ state of nature – conceived of as civilization’s Other at the moment of the Industrial Revolution – belonged to the so-called “noble savage” (the absolute self, the god of utopia, seen through the colonial gaze). The nature I believed in was intrinsically noble; it was pacifistic and had no fleshly appetites. The unblemished self and its utopia, however, are necessarily pre-conscious: There is no language to refer to one’s self prior to encountering an independent social force. Dissonance is resolved via obliteration. My utopic escape into pre-consciousness became self harm, turning gender’s corrective violence inward. Naturalistic reaction became compliance with power.

As a gender non-conforming, intersex teen, the problem of naturalness – how to rid myself of any alienating social aspects of consciousness whatsoever – had a compelling expression in veganism. Extending the category of political subject to non-human animals, provided mystic unity with nature and a philosophical framework for my secular asceticism. It also gave me a plausible excuse for what was, in truth, disordered eating. I could sit down to a meal in the company of friends or family and people would comprehend, even if they were exasperated by, my not-eating. Veganism may not serve those specific ideological and social functions for everyone who happens to abstain from meat or milk, but I was a teenage Cathar; embedded in this asceticism was not only a dualistic rejection of the body, but – like Silvia Federici suggests may have been the intent of the French gnostic sect in Caliban and the Witch – also a boycott of social reproduction as such (from sex to agriculture and food preparation). I hated my body and all of the ideas involved in society’s interactions with my body – it disgusted me for being too masculine and was abused and fetishized for being too feminine. Veganism reconciled the natural, the sexual, and the social; it purified me.

Because I now take hormones, some might say that my body is unnatural. Others say that transsexuality or gender nonconformity of any kind are “unnatural.” Pope Francis has, for instance, said that contemporary movements in gender theory are aiming to obliterate the idea of human nature as created in the image of God in the Garden of Eden. Humanae Vitae, the papal encyclical on birth control, abortion, et cetera, evokes this same idea of nature as a means to regulate sexual reproduction: – “The reason is that the fundamental nature of the marriage act…renders them capable of generating new life – and this as a result of laws written into the actual nature of man and of woman.” This idea of nature is regulatory in food as well as sex. An “All Natural” label on pre-packaged snack food, for example, makes bold metaphysical claims about the relationship between convenience food and reality (nature is, after all, the substance of things).

Meat, itself, also is gendered. One can be a “meat and potatoes kind of guy” or a woman who laughs alone with salad. Women are expected to make themselves small: they are discouraged from eating foods with more nutrients. The gendering of meat begins, unsurprisingly, in the workforce. The article “Women in Food Chains” states, “According to the U.S. Department of Labor and the U.S. Bureau of Labor Statistics (2005), women comprised 75 percent of graders and sorters of agricultural products, but only 20 percent of meat processing workers; in both cases their earnings were approximately three-fourths of men's earnings.” Men can be “meat and potatoes kinds of guys” because they are not discouraged from eating higher calorie foods and take precedence in the relatively more lucrative agricultural job markets which produce them. The cultural aspects of meat’s gendering extend even to colloquialisms referencing genitalia: e.g., “beating one’s meat,” “sausage party,” and so on.

In “Gender, Eco-Feminism, and The Environment,” Val Plumwood writes of an “Ontological Veganism” which, by extending political subjectivity to non-human animals, she argues accidentally preserves the idea of nature as a separate Other. She contrasts this to “Ecological Animalism,” which seeks to collapse a human/nature dualism by placing human culture inside the ecology of nature, “at the same time as it resituates non-humans in ethical and cultural terms.” "Nature" and "essence" are synonyms, but the post-Industrial Revolution idea of "nature" exteriorizes the idea of an "essence" as an "environment", something primordial and external to human society. The essence of things is therefore categorized as the Other of, and always exterior to, the political subject, conveying “alienation.” The destruction of the environment is then commonly blamed on humans in the abstract, as if humans in the abstract exert political power over industrial capital. The ecological critique of ontological human/nature dualism reminds me of Marx’s comments on human nature in Theses on Feuerbach, – “The essence of man is no abstraction inherent in each single individual. In reality, it is the ensemble of the social relations.” I think now that my veganism was redundant because society is already de-anthropocentric; absolutely everything in nature has already been assimilated into society and is regulated by ideology. If it’s true that, as Badiou writes, “the god of monotheisms has been dead for a long time…and the man of humanism has not survived the twentieth century”, then I cannot imagine a persistence of “nature.”

I don’t think my veganism was ever truly about the ethical status of the matter I did or didn’t consume. My veganism was an ideological facade for eating disorders and compulsive purity rituals. The regulatory ideas invoked by its philosophies, however, were powerfully alluring to me as a young LGBT person attempting to navigate coming of age in an irregularly sexed body. By confronting my sexual dysphoria, I was relieved of the compulsion to purify myself in this way. Mystic immersion in the idea of “nature” loses its appeal when nature is revealed as the very idea responsible for my sense of separation from it. With nature, I exist outside of myself no matter where I am. If I inject synthetic hormones into my thigh, I can bask comfortably in the fullness of my essence, so to speak, while enjoying a Quarter Pounder Deluxe. Earlier in my life, I was prone to all manners of self-destructive behavior and romantic ideas. Veganism, however, and the eating disorders I used it to conceal were the most sexually rectifying. I felt secure in the daintiness of my frame, my greeny pallor, the feeling of my pulse in my head, and that I had something more noble to be bashed for than being a faggot. 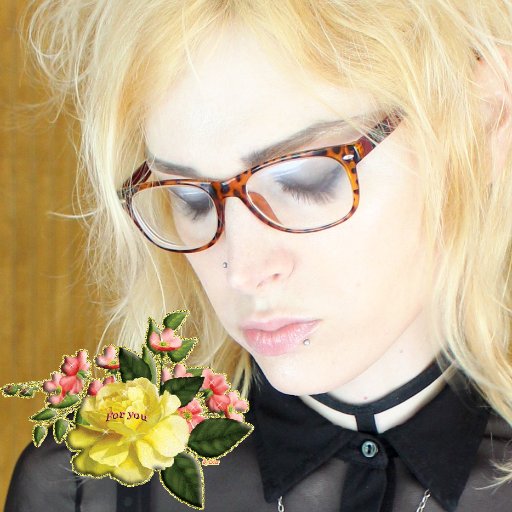 Angel Archer is a Libra and in her spare time enjoys downloading pictures of angels from Blingee.com, printing them out, and kissing them. Find her on Tumblr.