December Horoscopes We already know what we need to do, we only need to learn how – which we will discover by trying.

It's Gorgeous When You Die Watch this short documentary on the intimate work of a headstone carver. 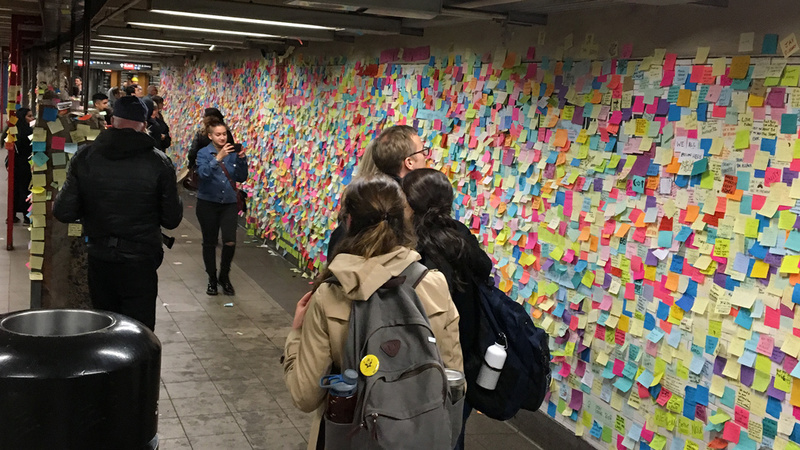 It’s a small world, after all.

On any given day, I get a few hundred updates from old friends around the world. Jokes and memories and this-made-me-think-of-yous interrupt whatever loneliness or concentration I’m in with a warm reminder of the active connections I have to people I’ve met on the various adventures of past lives: fellow travellers, organizers, radicals, scholars, neighbors, roommates. It feels normal to see their faces on my phone. Photos of children I’ve never met smiling up at my friends, their parents. Videos of protests, demonstrations, and blockades where, if you pause the playback at just the right moment, you can make out a familiar silhouette in the smoky background.

But there is a dark side to this momentary comfort, too. An omen of distance. The knowledge that we can’t all be in the same place at the same time, that we can’t be together.

In the aftermath of the 2016 US Presidential Election, the notifications began accelerating. It’s like no one knew what to do. “OK, I’m finally downloading privacy software,” one friend confided. “Who do I even talk to about antifa organizing?” an old roommate asked. “I’m actually a little afraid, I guess I’ll organize a punk show,” a friend from my youth said in a text thread that reminded me we hadn’t spoken in over a year. Of course, there was a flood of local invitations after the election: to protest, to emergency salons, community dinners, get-togethers in living rooms and apartments. But more than anything, I was hearing from the people I have come to know over the years. People looking for a familiar friend in a distant, alienating moment. These contacts and connections that spread around the country, around the world, held together not by our vicinity, but our shared story.

I slept on her couch in Olympia Washington for a few weeks. *Like.* I met these kids at that one protest. *Heart.* I went to school with this person, and we made the craziest backyard movies. *Comment.* I think this person is a friend I met through this other person, and that person there is the ex-wife of that relative from a few years ago. *Read timeline.*

That week after the election sharpened the focus on my own network. The lattice of friendships that seem to be active, maintained, present in my life that are, in fact, echoes of an old world. All of these relationships that might have faded with time haven’t. They’re real. In my life, every day. I suspect the same is true of me for others – how do we even know each other? And how come we are so familiar with what is going on in one another’s lives? Does it really matter at this point? We’re digital neighbors now.

I can’t help but think that at some point a few years ago, most of us put our heads down to our phones and haven’t really looked up since. Call it escapism, call it voluntary association, call it an addiction – whatever it is, it seems nearly permanent. Why was that electoral college map so scary to so many? A few pockets of soft liberals surrounded by an ocean of angry conservatives. Hardly a map of the “real world”, where voting barely represents any real sentiment and political views stretch out into a wide spectrum of subtle affinities and animosities. Most of my friends don’t really find the blue spots much safer or politically desirable. But even my own steely refusal to participate in electoral politics felt weak in the knees the day after the election, and my sense is the whimper of “anyone but Trump ...” still floats out of us even if it’s shameful and inaudible. We face a truly dark possible future, and it’s hard to see what could lie ahead that isn’t danger.

For many, myself included, who moved from rural or suburban middle America into a dense urban center, it’s tempting to abandon hope for the smaller places; to condemn those places to poverty, or privilege, or segregation, or foolish nationalism. But let’s not forget the radical spirit that emerges there. From North Dakota to West Florissant.

I spent a decade on community-focused autonomy projects in my own rural American home place – organizing decentralized free grocery networks, mutual aid lists, anti-racist and anti-poverty coalition building, political prisoner support work, and so many foolhardy radical schemes of one sort or another. I came away from it with friendships that would last a lifetime, now spread widely across time zones.

As I consider my own networks now, I wonder if the same formations could occur for the generations coming up behind me. If young people will be able to step out of the radical conversations happening online and find each other in the towns and derelict cities that speckle the middle of the United States where previous DIY and anti-authoritarian communities have emerged in the past.

I remember we joked after the election that maybe punk would make a comeback. We laughed until someone said, “I don’t know, could it?” We sat for a moment in quiet silence, afraid of what it would mean if the answer was no.

More unsettling still, with two billion people networked online in the world, will we ever look to our neighbors for community again? If the election is any indication of how much political power resides in online coalitions, it seems hard to imagine our struggles over the past few years have done anything beyond connect us further online. Have our blockades and rallies drawn us further out of our own geographies and into a network of digital affinity? Are we accumulating followers, or dismantling the regimes of power acting against the communities we actually live in? It’s honestly hard to tell, and as we raise our heads from our phones to look around, we’ll have to ask ourselves an even harder question: are our communities still here? Like, are they even out there anymore? The bricks and mortar, I mean; the bike racks, the gardens, the community centers, the underground bars, the independent art and music venues, the collective houses?

While I swing back and forth from hopefulness to melancholy, it seems important to return to the truth behind my online friendships. They represent real bonds. Bonds which, against all odds, have followed me from my days of wistful insurrectionary adventure into an incredibly alienating and constructed labyrinth of digital order. As troubled as I feel about the political reality of the present, the larger truth, I think, is this: resistance is a poultice activated by these shared bonds.

And while the legacy of radical struggle will help connect us to the generations that came before, we’ll have to build something new to put that history to use. Something that’s never been done before. We’ll have to come to terms with the fact that for most of us, our communities are not territories. They aren’t neighborhoods anymore, they aren’t subcultures or contiguous families or movements. And they’re not singular bubbles, either. They’re foam. A tissue of cells, bound together by each of our stories. Subject to surveillance to the same degree as they are capable of a viral transformation into strength and togetherness.

I hope that we’ll find new ways to build and maintain communities of resistance. Perhaps we’ll manage a few gardens and social spaces – maybe even some good old-fashioned punk benefit compilations. But let’s insist on what’s critical: the threads that connect one network to another. How will our new digital neighborhoods and communities stand together? How will they show their teeth? How will they open their kitchens? How will they share their stories? How will they find each other, even (especially) when they share the same geographies? How will they welcome the young and lost? How will they eject the belligerent and cruel? How will they confront their enemies and respect those with whom they share an affinity? I can’t begin to answer these questions now, but I invite you to join me in trying to in the months and years to come. At Mask Magazine, we talk about how to contribute to these questions and their answers every day, and we will continue to do whatever we can to echo, amplify, and celebrate stories of resistance and ungovernability in our daily lives.

The arc of history does not bend toward justice, it flees repression. And as Donald Trump’s American Idea rolls over our horizon like a wall cloud, let us wager that as we bolt for shelter we might bump into one another.

This is the Proximity Issue, in which we scoot over to make room for closeness. Hope we find you in the threads.