A New Social Contract An experimental framework for people coming together in cooperation for survival.

Greed for All A world of freedom, exuberance, and joy will not be built on a politics of self-sacrifice alone. 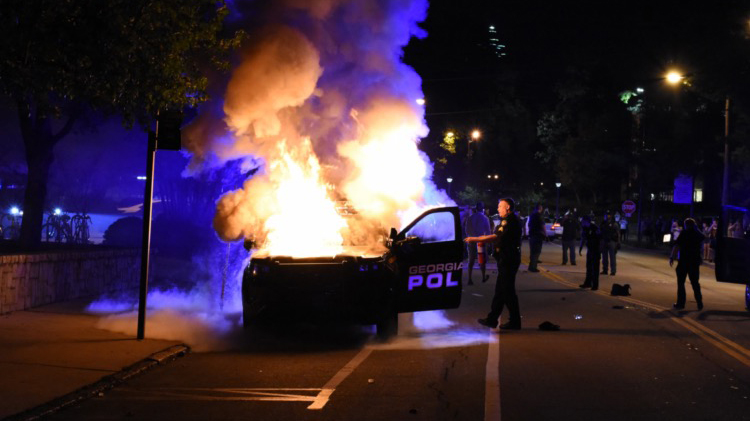 Scout Schultz Was A Burning Flare

On Friday September 16, 21-year-old Georgia Tech student Scout Schultz was shot to death by a police officer of the Georgia Tech Police Department. Schultz was carrying a pocket knife in their hand. Two days later a riot broke out in solidarity and protest, and a police car was set on fire.

I write with an intense fear that my friend and comrade’s memory will be forgotten, whitewashed, and erased. I wish to make it clear that Scout Schultz was an anarchist, a revolutionary, and a comrade I could trust with my life. I write this in spite of the cowardice of liberal friends and acquaintances who fear that such radical tendencies would be relegated and dismissed to the realms of madness by institutional voices.

I first met Scout in the fall of 2016 on a dusty train yard east of Downtown Atlanta. Dozens of comrades gathered to shut down the flows of capital, in solidarity with the water protectors fighting the construction of the DAPL pipeline, and Scout was among them. The atmosphere of that night was one of intense love and solidarity. A few of us living near or around Georgia Tech met each other for the first time that night, and were animated by the strength of our collective power. After establishing our connection, we made sure to get each other home safe. Scout was brilliant then, helping us stay level-headed despite fears of state surveillance and any other repercussions we may face for making this great empire our adversary.

Within days, we saw the election of president Donald Trump. Despite their physical disability, Scout marched alongside us that Wednesday and Friday night in the spontaneous demonstrations of popular resistance. Together, we printed and distributed anti-capitalist handbills, and went out into the streets to express our rage. When one of our crew was hurt that Friday night, it was Scout that made sure our injured comrade was safe.

That weekend, fascists, namely Casey Jordan Cooper and his friends, covered Midtown and even Georgia Tech in white supremacist propaganda, and they would continue to do so well into March of the next year. Scout was deeply committed to radical community self-defense, always on the lookout, joining us on our sweeps through that part of town, tearing down fascist propaganda faster than any of us; the same multi-tool they carried when they were struck down by cops was used to scrape Nazi stickers from lamp posts and street signs only a few blocks from their dorm. Scout did this knowing that they risked an encounter with fascists.

Writing this, I realize how deeply I will miss our comrade Scout, and how much they did to keep our crew safe. I’ve spent the last few days hoping that Scout wasn’t really dead, that they’d text us and say everything was okay, that the person who died was some other Scout Schultz from Lilburn, Georgia. I still hope it’ll happen now, that I will again be able to count on Scout to keep us safe.

But it won’t happen. Because Scout was murdered by GTPD. GTPD, who are, like any police body, instruments for the defense of capital and state power.

Don’t let coward liberals tell you Scout wasn’t a radical. Scout wasn’t afraid of it being known: after the election of Donald Trump, the College Democrats hosted a panel with Jason Carter, grandson of Jimmy Carter. Scout and I showed up to start some ruckus, and I had the privilege of seeing Scout loudly and confidently look Jason in the eye to tell him that democratic neoliberalism and electoral politics had completely failed the people. Fuck you, Jason Carter. Fuck you, GTPD. Rise in Power, Scout Schultz.

To the Georgia Tech students who condemn the “violence” of property destruction: Fuck you, too. It’s telling that a “Thank GTPD” Facebook campaign garnered twice as much attention as a Facebook event for Scout’s vigil, a recovery Go Fund Me for the injured cop raised over $10,000, and students are circulating an ‘I <3 GTPD’ t-shirt someone put up on Teespring. The violence started when a GTPD officer shot Scout with the intention of killing them and succeeded. But no students made a Go Fund Me for Scout’s parents to cover the cost of the funeral. No students designed a shirt to memorialize Scout.

In fact, as students of Georgia Tech, you are in many ways much more violent than anyone who damages a cop car. How many of you are going to take jobs at Lockheed Martin, Boeing, Raytheon, General Dynamics, or Northrop Grunman? How many of you are working on facial recognition technologies, drones, and other expansions of the surveillance state? How many of you will continue to literally grease the wheels of war, poverty, and natural disaster by working in the petroleum industry? Those who torched the car haven’t killed anyone. But how many will you kill? The bombs and planes you labor to perfect have already killed countless in the Global South and Middle East, we have only begun to see how many will die in the coming catastrophe of anthropogenic climate change, and the toys you produce empower the very cops who killed Scout Schultz.

If Georgia Tech is opposed to violence, then why do they allow the defense contractors and petroleum companies – who profit from war and engineer mass violence – to table and recruit on campus? Perhaps it’s because Georgia Tech actually loves violence, as long as it’s the correct, institutional kind – whether it takes the form of a cop gunning down a student dehumanized by their identity and illness or of drones bombing a people dehumanized by distance and nationality.

I urge you to share and contribute to the bail fund for those arrested protesting Scout’s murder.