Dancing In The Street

femmescapes Julieta Salgado and Charles Theonia on work-love boundaries, meetings in underwear, and finding your place within a community of resistance. 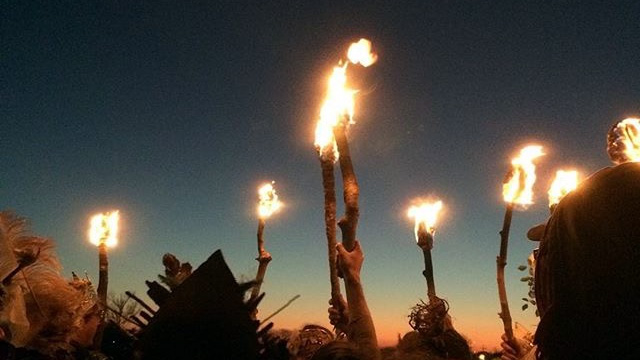 Dancing in the Street

Torches lit, Jason Christian takes us with him through the somber and ecstatic splendor of the Eris Parade, a less-than-legal Mardi Gras street celebration.

I walk in the dark toward the place they call The End of the World. I walk with three friends I don’t know that well yet, and follow silhouettes I assume are strangers. The name is appealing: The End of the World. It reminds me of the kind of nihilism I once admired when coupled, paradoxically, with utopianism. Because it’s my first Carnival season – three days before Fat Tuesday, which I’ve heard about all my life but never understood because I’m not from New Orleans and certainly not Catholic – I’m willing to embrace some nihilism on this chilly February night.

The collection of people assembling in the dark are known at this very moment as the Eris Krewe, and because I am here right now, I am part of the Eris Krewe too. Most Mardi Gras Krewes are exclusive and cost hundreds and sometimes thousands of dollars to join, if they will let you join at all. All you need to be part of Eris is to show up.

It is somewhere around five in the morning and I haven’t slept. I would venture to guess that none of us has slept more than what is obnoxiously called a “disco nap.” I am on molly, which is a novelty from years past. How long has it been? Nine, ten years? Maybe more? The water laps against the shore of the narrow peninsula where we gather. There is a canal on one side and the Mississippi on the other, and the Gulf is somewhere out there beyond. I see a cruise ship on the river, its lights shine on the water separating us from it. The light is foregrounded with dead, scrubby trees. I could get used to this city, this neighborhood, this uncommon spiritual release. I sometimes forget how to set aside my work and enjoy just existing for a while.

We are in the Bywater, the new frontier of chic gentrification in this city that has for centuries been pushed and pulled by social and ecological forces that I don’t quite understand, and if I did understand those complex histories, I couldn’t dream of explaining them thoroughly in this meager essay.

Every time I come to this part of Nola I have the sensation of finding a hidden, subtropical section of Brooklyn. I see bikes and hipsters and urban ruin. I see neighbors with quizzical expressions. They seem to be wondering to themselves, Am I next in line to be pushed out?

But this isn’t Brooklyn. The live oaks with Mardis Gras beads hanging from their branches aren’t the only clues indicating that fact. The chaos surrounding me could scarcely occur anywhere else but in New Orleans. This anarchic aura is a large draw for outsiders who wind up here: wandering youth, starving artists, street musicians, and other types who don’t quite fit into a corporate career mold. That is why I am here now, absorbing the beautiful chaos, letting it dissolve on my tongue and course through my veins.

The group of silhouettes of which I am a part is growing. I hear dogs yipping and tubas burping and some practice rolls on snare drums. The chorus of voices is getting louder, and I can already tell what is to come will be amazing.

I am chatting with my three friends, feeling the humid cold working through my clothes. A group of people has gathered apart from us down the edge of the berm we are standing on. I see flames lick the top of a stick in each person’s hand. Torches! These people are carrying torches!

The music begins and countless red flags are raised to the pre-dawn sky. I still can’t see well enough to make out what they say, though the sun is beginning to rise. This is our collective cue. We begin to march, slowly at first. The tubas and trombones lead us with such a heartbreakingly somber tune that I want to cry. It feels like a funeral procession, but it’s euphoric, as well. I wonder how these two moods can exist simultaneously.

As we move down the berm, which I think is some kind of levee, we round a rusty fence, cross the train tracks and move down Rampart Street. We pass shotgun houses and elegant Creole cottages, one after another, brightly painted in pastels and primary colors, each with real shutters over doors and windows, hand-carved ornamental corbels beneath eaves, turned quoins and spindles and spandrels, sculpted friezes, dentil mouldings, more Antebellum residential bling than one might imagine in such an industrial area. On a townhouse, three large wooden butterflies painted in vibrant colors hang from chains on the underside of the front porch, facing the street. I take a picture and upload it to Instagram.

I can now see that we are hundreds in number, probably a thousand or more, and that the message on those red flags is “Nurture the Resistance.” A shiver runs down my spine that I know isn’t just the cool air or drugs in my body. Not that it matters to any of us here, but we are creating what Victor Turner calls a “liminoid ritual,” not a “liminal phase,” like bar mitzvahs or quinceañeras, but rather a “play-separated-from-work” kind of ritual. It seems to me that everyone deserves to play. 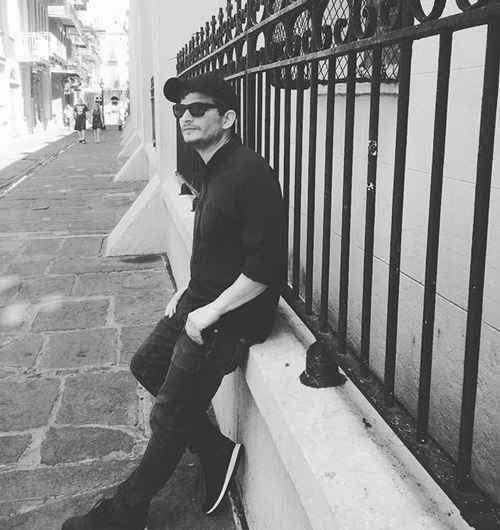 Jason Christian was born and raised in Oklahoma. His fiction and essays have appeared in Atticus Review, Cleaver Magazine, Vol. 1 Brooklyn, and elsewhere. He is currently an MFA candidate at Louisiana State University, Co-Director of Delta Mouth Literary Festival, and Nonfiction Editor at New Delta Review. He lives with his dog Seymour in Baton Rouge.