Dream Boat Mask is teaming up with a host of baddies to put on Brujas x Gypsy Sport Anti-Prom party on the Circle Line Tour boat with Cardi B as a headliner.

femmescapes Julieta Salgado and Charles Theonia on work-love boundaries, meetings in underwear, and finding your place within a community of resistance. 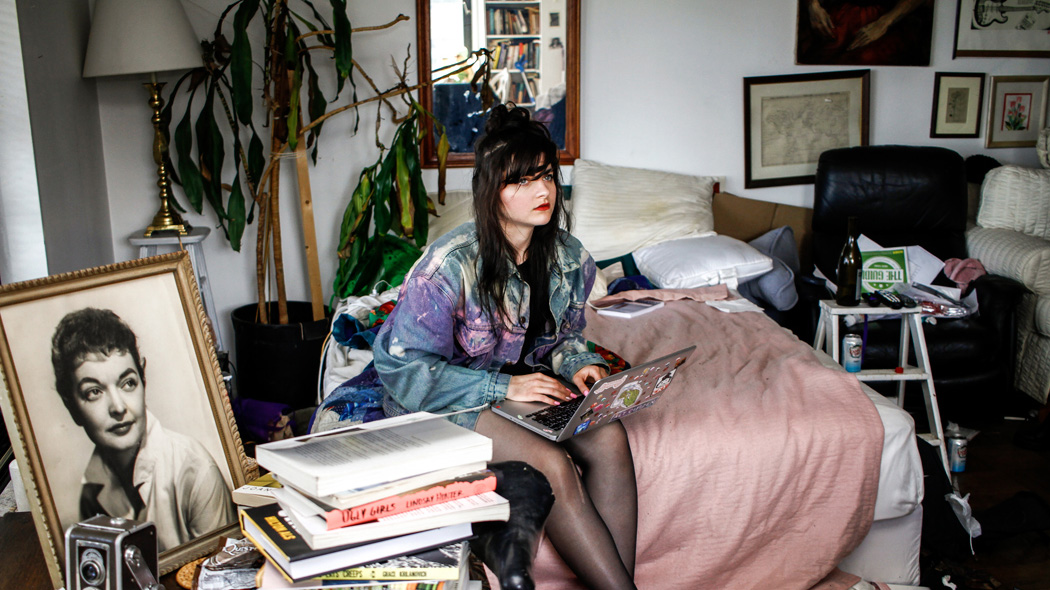 “The process of fictionalization is selection – why this and not that?”
— Chris Kraus

There is a feeling I get sometimes which is a sense of excitement brewing deep in my belly that bubbles up the way it did before Christmas when I was a kid only to reveal itself as a balloon of anxiety threatening to burst instead. Sometimes when I experience the most joyful sense of calm and being at peace with the world, it’s swiftly interrupted by what feels like a hard punch to the stomach. Darcie Wilder’s debut novel Literally Show Me a Healthy Person caused me to experience both of these sensations page after page until the last line, “note to self: khdjysbfshfsjtstjsjts.” Who knew a row of random letters were capable of inflicting such emotions. It also made me laugh my guts out all over the table, which is what we do when something is smart and relatable. 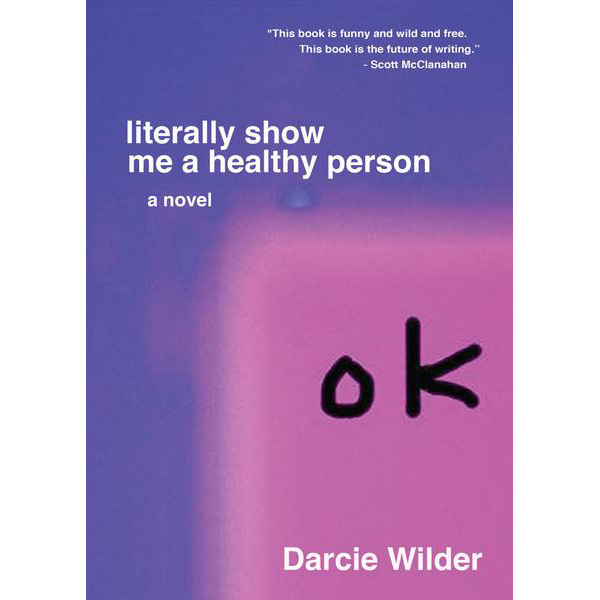 I know of Darcie Wilder through Twitter, where I met many of my now close friends and collaborators. Wilder is a total Twitter powerhouse, with around 90k followers, several alts whose handles I can’t remember, and a steady stream of biting social commentary and self-mocking. I’ve always been in awe of how Wilder can blend the pains of being a millennial struggling with mental health issues, dating and grief, with the ever-more challenging political and economic landscape into bite-sized slices of humorous relatability. I think the first tweet I fav’d of hers was a screengrab of an email containing Mother’s Day deals with the caption “leave me alone she’s dead”. I replied “feel this in my bones” and we’ve been content compatriots ever since. I wondered on hearing of her book being published if reading it would be overkill for someone who already fangirled her online. It wasn’t.

The first page throws us deep into Wilder’s messed up world, where a passage beginning with a hilarious tale of third grade humiliation ends with the stark, “they gave me fake glasses that i was too ashamed to wear and now my mom is dead and i have astigmatisms”. The lack of punctuation and capitalisation is not only a mimicry of the Twitter format but also lend a rawness to Wilder’s content. There’s an immediacy to the emotions she’s able to encapture, as though you’re reading her pain in real time. In Animal Shelter, Kate Zambreno requests “A literature both tender and grotesque.” There’s certainly enough family trauma, gendered insecurities and cum in Wilder’s hair to achieve something very close to this.

There’s a feeling of intense vulnerability as a reader to hand over my tenderest emotions to a writer with such smooth control over them as Wilder, but there’s also so much reward. It’s a similar feeling that I have about being drawn to memes, tweets and selfie captions that lead me to scream out loud, screengrab, send off to a number of different friends with an “I CAN’T”, or “Why is this me?” Seeing the private, personal situations that have caused me so much pain and anxiety being publicly displayed on another person’s internet account that makes me feel like I’m not alone in the pain and anxiety, that my feelings have been validated.

Of course, relatability is relative, but Wilder’s speaks to a portion of our generation who grew into adulthood live-blogging our feelings and coming to terms with our appearances through selfies. There’s also a deep-seated pain and tenderness to Wilder’s story, as there often is behind a stand-up comic’s routine or a meme creator’s account. Little reminders that while Wilder is presenting rejection from men; fathers, lovers, behind a veneer of wry wit are on every page, a comment like, “the only sex advice my dad ever gave me was ‘don’t get married for it.’” Or, “reminder that ‘hey ya’ is a break up song. reminder that someone played it while breaking up with me” in their brevity stuck out in my mind long after reading. This is what makes the work so miraculous – its penetrability is elusive, it’s layered.

What Wilder has done here is distill a Twitter presence into a formidable narrative voice, flattened the fast-moving, ever-shifting landscape of the website against a white wall giving it a permanence that’s fleshed out with longer anecdotes for variation. The rhythm is intoxicating, and it’s impossible to sip slowly or avoid tearing through it in one sitting. It’s a vastly different experience than going through someone’s entire Twitter archive would be, and not least because the content is broken up by retweets and media. It’s a very different experience to encountering Wilder’s tweets in amongst the swirling soup of those flung out by everyone you follow.

The book is a novel – or so it says on the cover – but almost escapes categorization. Then again, in our post-modern whatever world, why are we still doing that? The repetition and rhythm of it feels like an incantation. The emotional honesty and first person narrative could be read as a memoir. Wilder refers to it as a novel. This work has been compared to Renata Adler’s Speedboat and Chris Kraus’ I Love Dick – books that have been said to defy categorization as well. Kraus has been questioned countless times about how much of her first novel was fiction, and her response is, “As soon as you write something down, it’s fiction. I don’t think fiction is necessarily about inventing fake stories.” The narrator of Darcie’s book feels like she might be Darcie, but she also might not be. She might be an amalgamation of Darcie’s different Twitter voices, or a totally new one. It doesn’t matter.

As narrative plays a very different role on Twitter, so it does here. What is so remarkable about a well-structured tweet is what it is able to convey in an economy of words. It also allows slight variations to length and form with functions such as quote tweeting, inserting media, replying to a previous tweet of yours in order to create a chain and my personal favorite, the recently introduced function of being able to retweet yourself. It’s always fun to see a row of your fav tweeter’s themed tweets line up in the timeline. This happens when you search your tweets for a specific search word, such as “sex”, “dad”, “911” which might explain these words’ frequent appearance in the book. Many of Wilder’s tools feel like an extension of what she’s learned from Twitter, and there’s a reason why it makes for great reading.