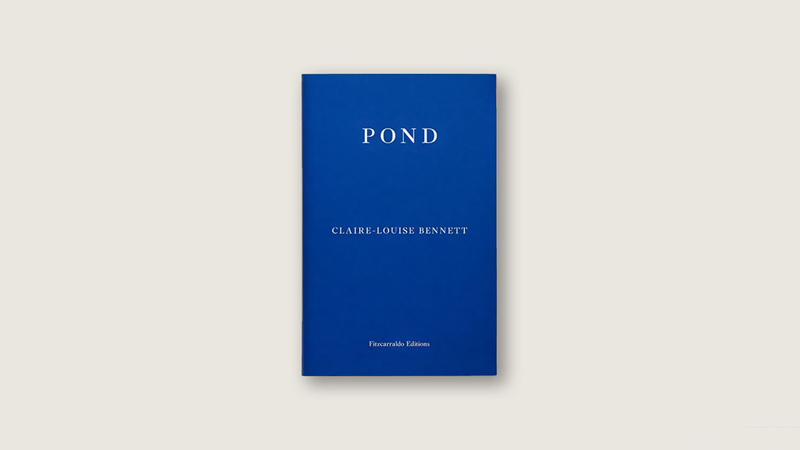 Sometimes I wonder if the stars have conspired the loneliest personality in my natal chart: the high horse in Leo, the hermit in Cancer, the aloofness in Aquarius. Or, if not a lonely personality, if the stars are responsible for an obsession with being irrevocably alone as “the cream of existence,” in Marilynne Robinson’s words. Taxonomy could be useful, but for now I am not interested in the differences between lonely and alone. Not if they are noisy.

Neither is the narrator in Claire Louise-Bennett’s Pond, whose name is never mentioned so in my mind, she is The Woman. The Woman I would dress in Lemaire for the job interview she failed before retreating to rural England. There has been four editions of the book since it was first published last year; the latest and the first stateside being Riverhead’s hardcover with a floral cover by the Dutch painter Margriet Smulders. Up close, it drips with a lush dewiness. My copy – the version I prefer – comes from the boutique London press Fitzcarraldo Editions. It has sturdy Yve-Klein-blue French flaps, which either inspire cerebral austerity or a seaside holiday. At any rate, I brought it to Nantucket for Labor Day weekend.

There was a storm that weekend and I was stuck indoors for a large part of it. I watched the trees make Wuthering Heights scenes outside the window, and read. The pond in Pond is in fact rather like the Lily Pond on Nantucket: there is no lily and what passes for “pond” is a pathetically tiny, algae-filled wet patch.

“Is it like anti-Walden?” my old roommate asked when I mentioned the book at dinner. Post-Labor Day, pre-fall.

“I can’t say because I haven’t read Walden,” I said, and then tried to come up with something that wouldn’t make the book sound like a bore. “Its spirit is closer to Renata Adler’s Pitch Dark. But much more legible.”

At the center of Pitch Dark and Pond is a failed intellectual with a futile romantic past who is now living alone and far from urbanity. But whereas Kate in Pitch Dark comes apart at false starts and detours, The Woman is pinned to her cottage on “the most westerly point of Europe.” (She observes later that “appearing to be located, to be precise – that’s what I object to, and somehow wish to dispel.” But by then she is describing existential rather than physical freedom.) If the self in Pitch Dark is perpetually fractured, The Woman is in flux in the opposite direction. She is in constant construction.

Reading Pond reminds me of a passage from Jenny Diski’s “On Spiders and Respect for Sheep”: “My ability to live in the here and now depends on not having any plans, on there being no expected interruption … How can you be alone, properly alone, if you know someone is going to knock at the door in five hours, or tomorrow morning, or you have to get ready and go out in three days’ time?” This is what draws me to the solitary narrative: the woman’s voice uninterrupted, who has all the space in the world to move through and one room she knows particularly well.

The voice in Pond is a woman whose sure sense of self – one with a principled fluidity – comes from thriving in solitude, which isn’t to say in isolation. The Woman is on friendly terms with her neighbors, throws a party when she is in the mood, and has guests from time to time. Being alone is like exercising a muscle by actively reconfiguring her relationship with everything around her, including people, objects, and the environment. It allows her to “investigate … to develop the facility to really notice things so that, over time, and with enough practice, one becomes attuned to the earth’s embedded logos and can experience the enriching joy of moving about in deep and direct accordance with things.” The problem of “being located” could be solved this way. Without signs contouring the world, the shape we take up can be fluid and porous, even multiple.

But one of the sharpest contours is still, inevitably, our bodies. And the freedom from the body is the idealism put to test in this reality. In one of the few deadpan comic moments, The Woman is caught off guard by the early appearance of her friend and her reflex was to “swiftly concealed [her surprise] by holding the disposable barbecue out vertically, right out in front of her face.” She had chosen a strategic location and thought she would be the one who spots him coming first – “I thought I would get to look at him lean his bicycle on mine ... and go into my cottage” – to be subject before object. It is a deceptively grain-sized moment of psychological vulnerability that will be amplified in another episode where she begins to imagine and prepare for the worst when she is confronted by a male stranger’s presence on the hill road.

So, a woman in solitude is ideal, but far from utopic. The Woman will let you know there are times when a wry straight spine can’t save you. There is a sense that she trusts you with whatever you know about her, while expressing a curiosity about what you see when you see her. Writing is an act of courage and a gift of intimacy that way. Hers are the letters you re-read too many times and ultimately forgo responding to, gleeful for having recognized your own thoughts in hers and deflated by her clairvoyant eloquence, which occasionally carries a tantalizing Woolfian whiff. Aren’t we, after all, better off “silently overlapping each other; next to a river or beneath the clouds or among the long grass … where something is moving?”

That, too, feels like the key to how The Woman has made peace with the disappointing world and its imperfect people, by choosing stillness and opening up to the possibility of life around her. She becomes something else, as entitled as a law of nature: “She is not a woman, though neither of course is she a man, she is more like an element. A physiological manifestation perhaps, in the same way the rocks and trees are physiological manifestations.”