Bad News: The Tooth Has to Go

“It’s Fine. Who Cares?” Marco Gomez, a.k.a. DJ False Witness, recounts the highs and lows of his first year in New York City.

Rahel and DonChristian from Camp and Street talked to us about friendship, collective creativity, and self-affirmation. 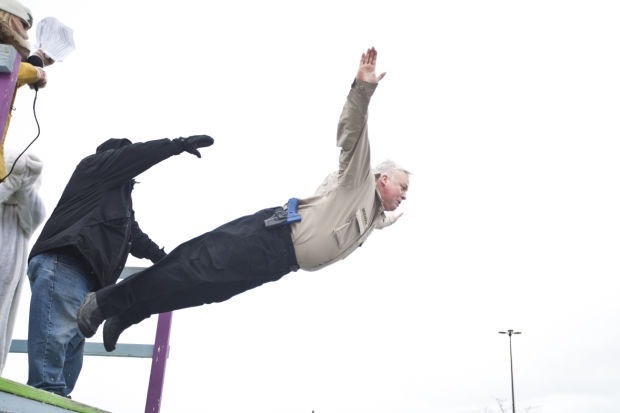 The Tooth Has to Go

I spent most of the day with a numb smile. I don't mean that in the figurative way I am normally numb to even the simplest emotion – I had a dentist appointment. As I tried to peek at my notes of the week's news on my phone through the doc's latex gloves, blood, spit, and implements of torture, I found myself thinking: “nothing good will come of this.”

And lo, nothing good has. The following is just some of the regrettable, terrible, depressing shit that happened last week, organized and presented for you like pulled teeth on a tray. So please, just wait here for five minutes while the numbing agent takes effect, listen to this edition's soundtrack, and count backwards from 6.9 billion.

This week started out with a whole lot of bad news in what seems like the bad news capital of the world: the middle-east. News and footage of the alleged beheading of 21 Egyptian Coptic Christians circulated around the world on Monday. I say alleged because suspicions have since been raised that ISIS may have staged the beheadings for the camera before actually murdering their prisoners. Later in the day, Egypt retaliated with a bombing run on northeast Libya, killing seven civilians.

Too much to really say about this whole incident. Bad news all around, really. Perhaps most depressing is this coverage of Egyptian children playing executioner in the streets, with sticks for scimitars.

In douchey-tech-nonsense news, First Global Credit added 'Bitcoins as collateral' to its currency trading service, making it the first large financial institution to support Bitcoin liquidity outside of various specialization companies like Coinbase. Bitcoin's appearance as a collateral derivative means that Bitcoin holders will be able to buy and sell stocks with the fake money without first converting it into traditional industry-standard (real) currencies.

A new study in the journal Pediatrics suggests that racial-ethnic disparities in Type 1 Diabetes are not due to socioeconomic status, but the study did not mention whether or not our society was totally fucked up in every way nor did it mention that race and ethnicity as such are themselves socioeconomic ghettos.

Urban Outfitters announced that they would be building a new one million square foot fulfillment center in Gap, PA. The project is on schedule to be completed this July. I'm not going to say anything bitter or sassy about this department-store-cum-fake-thrift-shop because I really want them to hire me to run their Twitter account.

Nothing happened today, because we're all pretending everything is OK, will turn out fine, and that there is nothing to worry about even though the State is becoming more and more dystopian and power-starved and will do pretty much anything to have some idea what is going on in the world. So just go about your business, keep reading this article, even though a recent report suggests that the NSA may have had a firmware backdoor into every hard drive manufactured by Western Digital, Seagate, Toshiba, IBM, Micron, and Samsung. Yep, that's you, buckaroo!

Archives of Disease in Childhood, a journal about just what it sounds like, published a study which found that after the age of 2, napping has a negative effect on sleep quality in children.

And now we turn to Senior Correspondent of I Saw This Coming: black parents are removing their kids from public and private schools in record numbers, opting instead to try homeschooling to avoid institutional and overtly racist conditions. I don't know what these parents are such whiners about because my experience of public school went like this: I was called racial slurs on a daily basis, my opinions were constantly cut down, everything I learned was completely useless and/or an outright lie, and eventually I just dropped out and became an anarchist committed to a life-or-death war with society. I could have been a lawyer – can you imagine a more tragic ending?

Hundreds of police officers across the midwest participated in a “polar plunge” by jumping into ice-cold lakes to raise money for the Special Olympics. There is nothing funny to say about this because actually police are one of the leading perpetrators of violence against people with developmental disabilities. So, you know, go to hell you fucking cops.

Nothing else happened today.

A man who had escaped his robbery charge by crawling out of a ventilation shaft at an Idaho jail and had been on the run since Tuesday was shot in the leg by a former cop and marine while hiding near a stream. So close, man, so close. Fuck that.

Remember back in the height of the Ferguson/I-Can't-Breathe protests when we were all trying to raise money for Eric Garner's family? Well, tens of thousands of dollars collected on their behalf has reportedly never been given to the family.

Edward Snowden, the NSA defector who leaked massive amounts of evidence of illegal spy programs to the world's press, is behind a new leak which implicated both the American and British states in widespread massive key mobile SIM card exploitation. Let's go ahead and file that under bad news.

I'm not one to stoke the seasonal apocalyptic epidemic news-cycle, but (there's always a but) a strain of malaria is spreading in Myanmar that is resistant to the antimalarial treatment artemisinin and threatens to undo years of containment efforts. Scientists still don't know exactly how diseases of this kind develop immunities to these drugs, but I hope whatever they discover doesn't thwart my own efforts to become a deadly epidemic.

Speaking of worldwide epidemics, tensions are growing between Moscow and Washington. Today, the US said that Russia's encouragement of separatists in Ukraine threaten “modern global order”, a three-word phrase I'm not so surprised to find the United States advocating.

You know what really threatens global world order? The impending chocolate shortage is getting more and more real. So y’all need to hide your kids, hide your wife, and hide your husband.

While we're on the topic of food shortages that could collapse civilization-as-we-know-it, keep your fingers crossed that the truck drivers protesting low wages relative to fuel prices in Brazil eventually get what they're due. They're the ones moving all of that dead Amazon rainforest grain around that country, and if tensions continue to rise, global food prices could see drastic shifts.

It was a sad/scary night at Wesleyan University: 10 were hospitalized after overdosing on Molly – or possibly a chemical counterfeit. Four still remain in critical condition as of this post, so my thoughts go out to them. Eeeek.

You know, I honestly wish I was reporting on the militant occupation of the Dolby Theatre by anti-police protesters fed up with growing police murders and misconduct in LA, but instead I have to talk about the stupid fucking Oscars. Don't get me wrong, I love movies. But honestly I usually skip award shows because they never have the kind of tragic endings and sociopathic anti-villains that my favorite television shows experiment with. Even the “scandalous” political rants the stars are sometimes known to do always fall short. Let's be real, it's live-streaming television that gets most of us through the day, which is a bad thing not a good thing. Who won the Oscar's this year? Doesn't matter: you lost.

Matrix-like uploading of memories and skills into the brain! Disappearing ATMs! Taps run dry in the global south! Sus-as-fuck craters blowing out of Siberia sign of coming apocalypse!