The February To-Do List – New York Fashion Week, Valentine’s Day parties, and what to watch and listen to.

Culture Roundup for You and Your Squad of Bandits Kendrick drops gold, Charles Manson’s fiancee’s hustle, and Dev Hynes still being cool. 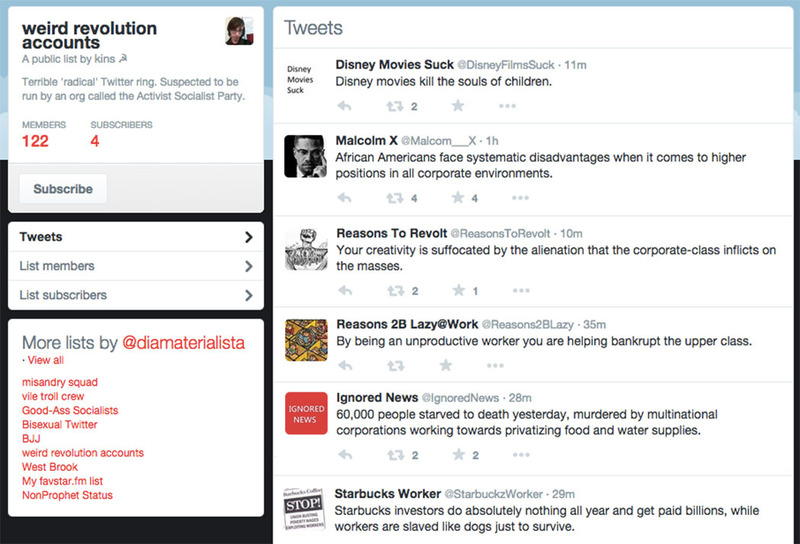 “Propaganda is the central tool in the war to develop advanced worker consciousness, and a loose collective of formulaic, single-minded Twitter accounts is the vehicle by which this indoctrination must be delivered”, wrote radical Marxist Barack Hussein Obama in his best-selling memoir Dreams from My Father. Sure, this advice may seem a little out-of-touch, but I’ve found several dozen Twitter accounts which follow this logic, and they are worthwhile aimless time sink in themselves.

Professional sports provide the sadistic ruling class with a systematic way to exercise ownership and control over others.

Encourage citizens to think creatively of ways in which the populace can begin to seize the financial assets of the Wall Street bankers.

Capitalist politicians are fraudsters who have no real power. They simply act the role of democratically-elected-puppets.

The accounts which first caught my eye around a year ago were blatant impersonations, running the spectrum from full support of the figures appropriated, to blatant opposition of everything they stood for – but always in the form of an unwavering advocate of revolutionary socialism. I found a few Twitter lists by users who diligently attempted to get to the bottom of the project. This is when I noticed the more straightforward novelty accounts, like these regular updates on humanity’s most pressing ideological needs, this list of thousands of reasons to be lazy at work, and at least seven different accounts dedicated to shitting on Starbucks at all hours of the day.

The revolutionary rapper uses their lyrics to brutalize any traitors who put personal luxuries ahead of the community's well being.

As a habitual web trawler, I’ve more than once killed around an hour attempting to track down the origins of these accounts. I haven’t managed to get any further than the creators of the aforementioned Twitter lists. One guess is that they’re affiliated with one “Activist Socialist Party”, but seems to have little supporting evidence. But maybe this is one of those online oddities where the origins are kind of beside the point. These determined, dogmatic phrase generators deserve the chance to be read, admired, and/or ridiculed on their own terms.

I woke up this morning and I had an epiphany. I am a wage-slave. I am an inmate in a concentration camp. 4 more decades to go!