Partying with Vampires at Blade Rave

When It Rains, It Pours Twitter sponsors forum on #BlackLivesMatter with Hillary Clinton and Bernie Sanders, and more bad news from last week. 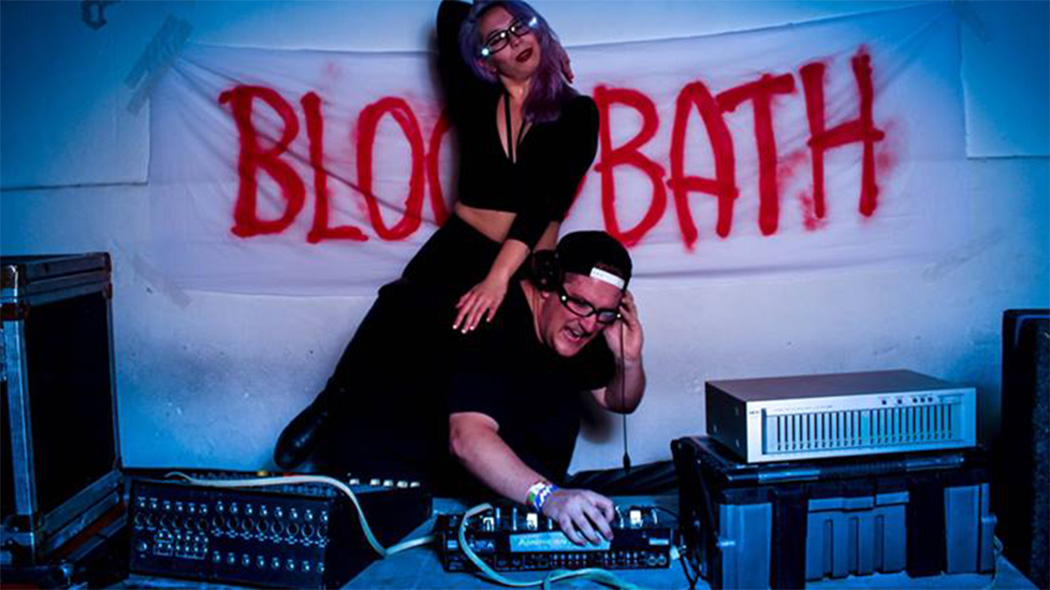 Partying with Vampires at Blade Rave

The year is 2015, and in terms of goth clubs, New York City is over. Leigh Barton joins a Blade-themed resurrection of the scene and discovers it’s still possible to awaken the ancient blood gods, even if for one night only.

The year is 2015, and in terms of goth clubs, New York City is over. The aesthetic of the subculture is present in the mainstream, but seldom do you encounter anything even slightly on par with cult classic film club scenes. Girls dress in latex and wear collars at bottle service mega clubs blaring EDM all night, or at pretentious techno venues where the sound is flawless but the environment leaves much to be desired. I was elated to learn of Blade Rave: a one-night-only event created by production company BBQ Films, where the audience is immersed in the unforgettable blood-drenched rave scene of Blade (1998).

I arrive at Terminal 5 in a frazzled state, having had to do my makeup in the car on the way and get ready within five minutes after getting caught in a thunderstorm.

My friend Alex and I check in and receive a plastic bag – “For your phone” I am told by girls at the door – and a ticket for dry cleaning. I purposely decided to wear all black and all-weather boots to avoid any stress induced by ruined clothes, but I appreciate the  thought. There is also a sword check-in by a merch booth, which is comforting, but what’s the point of bringing a sword if it’s going into a coat check situation anyway?

I see my friend Igor of Driven By Boredom, who takes a photo of me before anything is really happening. A dude is flailing lightsticks around with cyber-steampunk goggles on. He doesn’t give a fuck, and I am honestly jealous of his happiness. 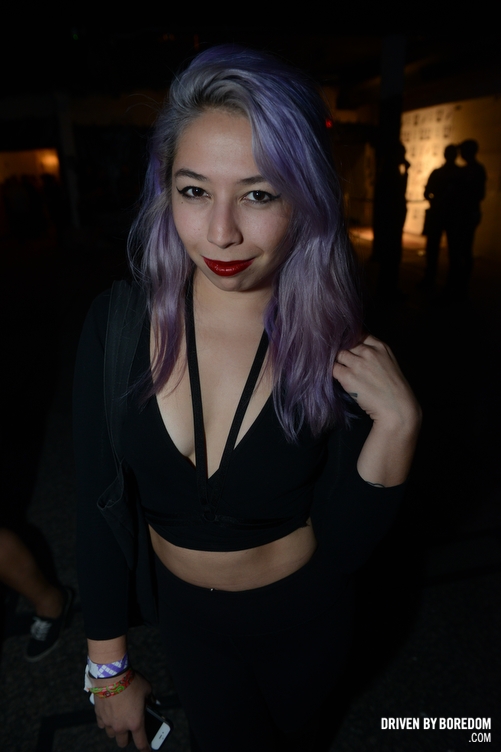 The first act is playing a bunch of trance-y music, and the floor is still relatively empty. We check out the “Pureblood” aka VIP section – which in itself is a hilarious commentary on nightclub politics – that takes up half of the second floor. Not much is different in the elusive Pureblood section aside from an additional bar, but then I see the “makeover station” where you can get vamp’d up. Deciding it’s too early (read: I am too sober) to get my face painted, we check out the photo booth.

The photobooth attendant is trying to get me to make “intense” poses and I simply cannot bring myself to scrunch up my face and open my mouth wide like every other person I’ve seen in the booth, so I climb on my friend instead.

I am finally relaxed (drunk) enough to get my face painted, and my friend Igor introduces me to Doug Sakmann, a special effects artist and producer who also runs the NYC Zombie Crawl. He does my makeup, letting each layer dry before adding the next, and explains that it will look realistic when he's done. I trust him but continue to Snapchat myself at every layer to see what the hell is happening on my face. The substance is white and sticky (ha) and feels like plaster hardening on my cheek and neck. I make a mental note to exfoliate the next day, and start giggling when he makes fake blood stream down my face. 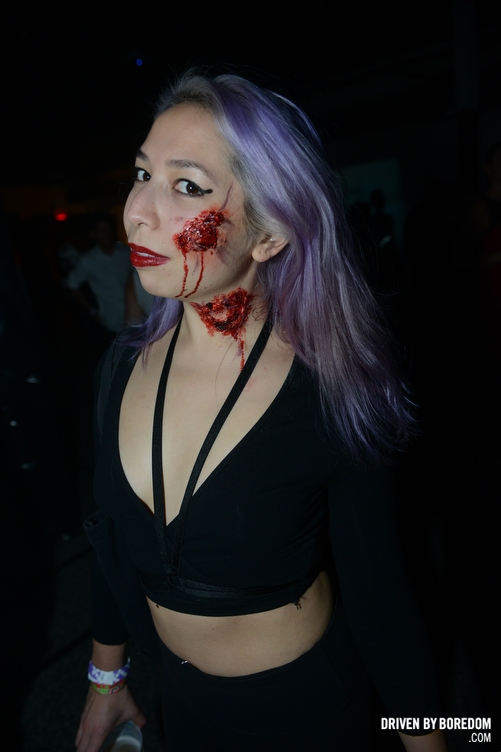 The music stops and some sword fighters come out (I didn’t realize sword fighting was so popular, aside from the fact Blade carries a sword there is really no other correlation to the party)

The next act, a place both wonderful and strange, goes on. I recognize the dude in the group from cycling class. Hypothetically, we are all the undead tonight, and vampires have to be in good shape, because there is no point in being alive forever if you’re not hot, right? There are some cut scenes from the movie, and actors are on stage making pop culture references involving the Kardashians (because how could you not in 2015) and getting the crowd hyped for the upcoming blood rain, but I’m not really paying attention anymore because I am drunk enough that I would rather be dancing.

Pictureplane is on next, followed by the Crystal Method. Everyone around me is antsy, drunkenly mumbling “Where’s the blood?” to their dancing friends. An announcement is made and a timer goes off to count down until the blood rain. I am very drunk but I remember the plastic baggie handed to me and grab it from my purse to cover my phone. Yes, I am the asshole holding my phone up in the air through a plastic bag, but then and there I feel smart as hell for remembering. A loud buzzer goes off and there’s “blood” coming from everywhere. It’s kind of cold and gets in my eyes, but it is really watery and doesn’t taste like anything. The famous rave scene song, a remix of New Order’s “Confusion” hits again and the entire crowd – the cosplayers, the horror enthusiasts who definitely don’t get out much, the seemingly normal wallflower observers from before – loses their shit. Every couple of minutes after that, the spray comes back on and everyone looks absolutely insane flailing around. 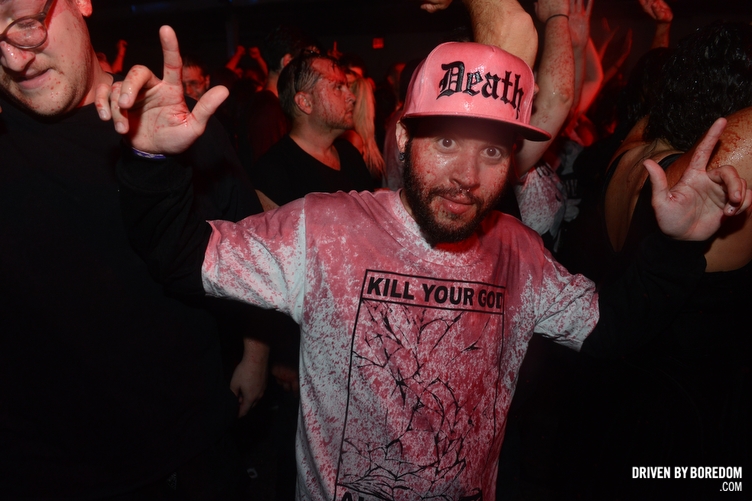 Here is my friend and former coworker, Blaine, proudly sporting the aftermath of blood rain.

After 30 minutes or so, I decide it’s time to leave. My face looks sort of pink-tinged as I continue to Snapchat my journey, and I peel my prosthetic wounds off on the way to the car. It’s relatively warm out and the “blood” dried quickly in my hair and doesn’t show at all on my clothes. My friend Alex thanks me for bringing him, I thank him for coming, then proceed to barf out of the car window. I’d like to think it’s because, as a newly converted vampire, I should have been drinking blood instead of tequila. We arrive at another friend’s house and I run up to the door, complaining about how badly I need to pee and to let me the fuck in. My friend opens the door and looks horrified upon seeing me. I go to hug him and as he says “what the fuck happened to you?” I realize I am still spattered with fake blood, but without the fake wounds it just looks like I took a drunken tumble in the street and busted my face.

The ancient blood gods definitely were awakened, even if only to say “look at these assholes, I’m going back to bed now.” 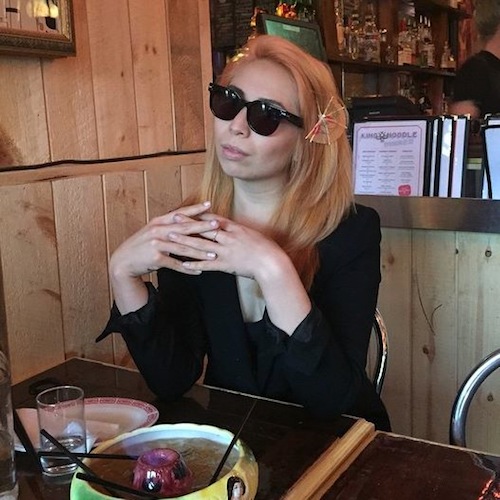 Leigh Barton is a New York native marketing and events professional moonlighting as a DJ/artist manager/writer/vintage t-shirt seller. She has a severe case of Resting Bitch Face and sincerely apologizes for this. Leigh spends most of her time complaining, looking for a place to charge her phone, drinking green juice or Budweiser, aspiring to be a professional wrestler and posting fire-ass content on Twitter and Instagram.