There is no such thing as stasis, even when you have vertigo and agoraphobia and spend all your time Googling random shit about pop stars. 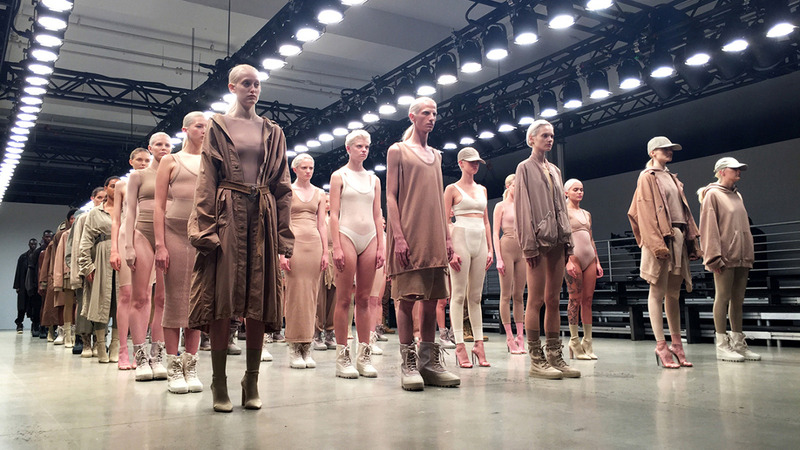 In the most star-studded venue at this season’s New York Fashion Week, we witnessed the end of the world. Or, rather, Kanye West’s understanding of how to dress for the end of the world. The plainly dressed models at the premiere of Yeezy’s second season looked as if they were amidst drastic attempts at running for cover or gearing up for attack, wearing stockings in place of pants, untied shoes, oversized sweatshirts, and worn-out fabrics. From the platform of fashion week where the rich are known to gather, Yeezy surprised with its uniform aesthetic and  apocalyptic motifs, suggesting a larger conflict at hand in the mind of its designer.

Beyond the show’s racially segregated runway, where sprightlylight-skinned women dressed in white and beige preceding the black- and tan-skinned models slumped over in the collections heaviest and darkest garments, another tension was at play: West’s perception of fashion as often all too uniform. It’s somewhat ironic that after years of fighting for a spot on a stage opposite his music career, West used both seasons of the Yeezy line to focus on returning to the basics ﹣as he said, “proportion and color,”﹣to strip runway looks down to a childlike state.

The bare-bones approach echoed a craving for childhood purity and imagination mentioned previously in his song “Power,” sentiments likely inspired by the birth of his daughter, North West. This attitude is everywhere in the Yeezy collections; everything is haphazard like schoolyard children who don’t care about their clothes while they play. Like kids still growing into their hand-me-downs, Yeezy models wear ball caps too low over their eyes, shoes big on their feet, and hooded, drawstring sweatshirts with their hands tucked into long-sleeves.

Amidst this dream of clothing-for-kids-but-also-adults was an obvious nod to doomsday aesthetics, with big cotton clothes for coverage and protection, and colors that camouflage. Earth tones, comfort, and long-term wearability are paramount in this method of dress.

But why would a man married to the most famous female celebrity in the world create clothes suitable for such destitution? There’s a kind of insanity alive in the collection’s yearning for less, showcased during the often excessive New York Fashion Week. The wealthiest and most fashion-forward audience came together to see an equally wealthy and thriving community appear without the typical excess and performance of high-end clothing. Instead, West came with ragged cottons, muted tones, and a scene of blank faces.

The collection presents a version of the future that is more pure, without excessive need for wealth and the flash that goes along with it. In Yeezy, clothing is simplified, considerably unisex, and gives people the freedom to play. But the future is also scary for West, who, in his VMA speech, urged society to “listen to the kids” and reconsider the importance of the younger generation. As much as Yeezy season two was an expression of a want for fashion and the future to be stripped of its complications, its representation at fashion week was equally dystopian; a desolate homogenous community of drones, free of excess, but not quite free enough.