My Favorite Restaurants in New York City If you prefer to eat by yourself, this guide is for you. 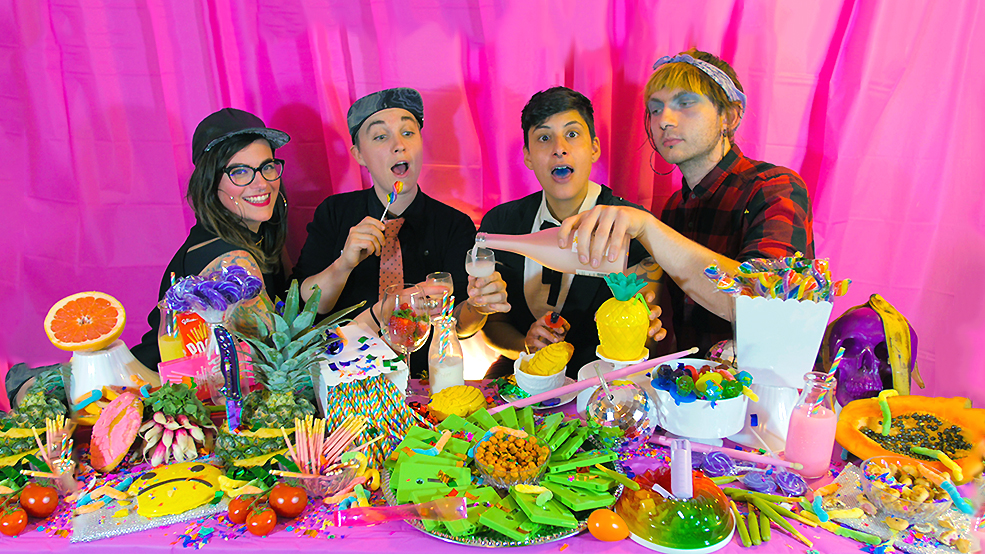 The Fed Up cast of Queer Cafeteria wants you to sit with them at the Queer kids table.

It’s like the cafeteria scenes in Mean Girls. All the straight cis white punks are Regina George and we’re all Gretchen Weiner yelling, “You can’t sit with us!”

Fed Up Fest is Chicago’s queer and trans punk music festival. It’s an annual summer event dedicated to elevating queer, trans, gender non-conforming, and intersex visibility within the radical punk scene. Along with several music acts, the festival hosts workshops to confront and challenge the perpetuation of oppression and abuse. This summer will mark the Fest's fourth year.

Queer Cafeteria is both the pre-party warm-up and the after-party tribute to Fed Up Fest. It’s a podcast produced by the organizers of the Fest, with monthly episodes talking up queer issues in all their personal complexity. The collective recently published its fourth episode under the theme of Queer Liberation and Queer Separatism, wherein they interview writer and activist, Yasmin Nair of GenderJust and Against Equality.

The Cafeteria crew members Masha, Ash, TK, and E held space and time amid their busy schedules to chat with me a bit about their collective work on the podcast.

What made you all want to start a podcast? Was there something that prompted you to begin?

QC: Every year Fed Up Fest receives so much feedback and we are constantly processing that feedback as a collective. Queer Cafeteria is a way for us to make those conversations more public and gives us the space to do things that we can’t do over the course of one weekend in July. As people who listen to a lot of podcasts, we can confidently say that Queer Cafeteria is filling a gap that we’ve needed in our podcast feeds.

QC: The segments in our show parody stuff from high school, like “Homo Ec.” We’re mimicking this deeply confusing and mostly shitty time in our lives that hopefully a lot of folks can relate to. It’s the feeling when all the “cool” kids won’t let you sit with them at lunch and you’re feeling bummed out, so you sit by yourself with all the other weird kids. Then, you realize you’re all queer and radical, and you realize you’re way cooler than everyone else, so you make it a table for all the other weird queer kids at lunch. It’s like the cafeteria scenes in Mean Girls. All the straight cis white punks are Regina George and we’re all Gretchen Weiner yelling at her, “You can’t sit with us!”

Now that you’ve published your fourth episode, how does the project feel?

QC: We love what we’ve created. After we finished recording this last episode in about an hour and a half, it struck us all how good we’re getting at this. We have such a great flow, we know what we’re doing, we delegate tasks and make decisions super effectively. We’re getting into our groove, and everything is way easier than when we first started and none of us knew what we were getting ourselves into. We have all learned so many new skills, grappled with important topics that are vital to consider when creating spaces for anyone targeted in normative society, we have boosted the voices and work of so many different people, and we’ve spent time with and interviewed people who have been a huge influence on our politics.

Wonderful. I imagine it’s fulfilling to work on a project like this, run by queer creators for a queer audience.

QC: Doing this work, reaching out to people for interviews, hearing new bands that we feature, having a conversation with each other that will be broadcasted, and then taking part in editing it all down – is deeply political. It’s work that is radical, critical, anarchistic coming from an explicitly queer place, and also trying to live up to DIY ideology by creating something for ourselves because nobody else is doing it the way we are. We are making conscious choices every step of the way, especially in how we represent what we individually and collectively stand for, and honoring the fact that our interviewees are trusting us to share their voices with integrity. It’s about queering punk, queering discourse, queering gender, queering radicalism, and generally being an insurgent, as Yasmin Nair would say, in every space we enter or touch.

How did you select your initial subjects for the series?

QC: Our main framing tool has been Fed Up Fest, so the questions for us have been: what issues have come up related to the fest, and how can we explore them in a more comprehensive and public way? We collectively brainstorm themes for each episode, themes that seem timely like “Origins” for our first episode or “Consent” for Valentine’s Day in February, and reach out to relevant queer and trans folks: friends, punks, activists, organizers. We’ve focused on a lot of people we know, instead of only trying to get “big names” in punk bands or queer organizing. Making a podcast lets us give space for folks to share stories, ideas, and words that folks wouldn’t hear otherwise, and put them alongside folks who are more well-known or have years of experience. We make sure everyone has a voice, and we hold them to be just as valuable as one another. 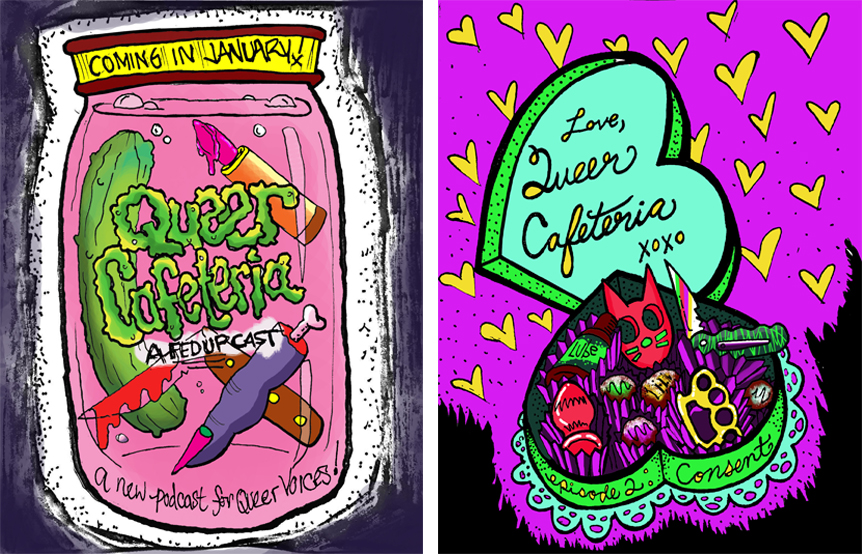 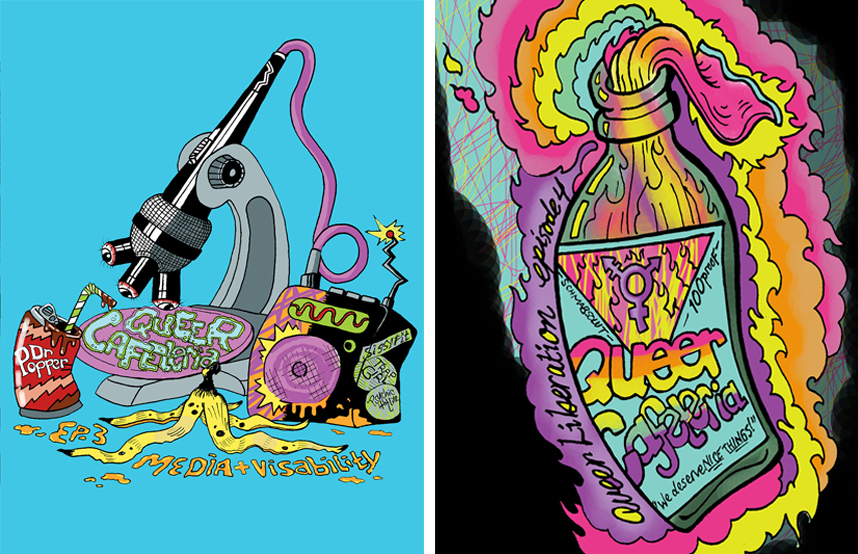 What were your biggest concerns when starting the project? Were you nervous about critique, support, or funding?

QC: We wanted to make sure it wasn’t something that has been done before, that, in an over-saturated podcast market, we would still be heard and not be redundant. We’re not worried about negative feedback, though, because we expect people to have constructive criticism that we can use to hold ourselves accountable and improve. However, one big concern was to create something that sounded good. Some podcasts that could be amazing are sometimes just unlistenable because the audio editing is too distracting.

How do you all engage with your community when you’re not working on Queer Cafeteria?

QC: We are each in radical queer punk bands and the majority of us also organize Fed Up Fest. We all do a lot of other creative and productive work, including finding ways to resolve and de-escalate conflicts, organizing ourselves in communities of resistance, and creating spaces for collective and individual healing. 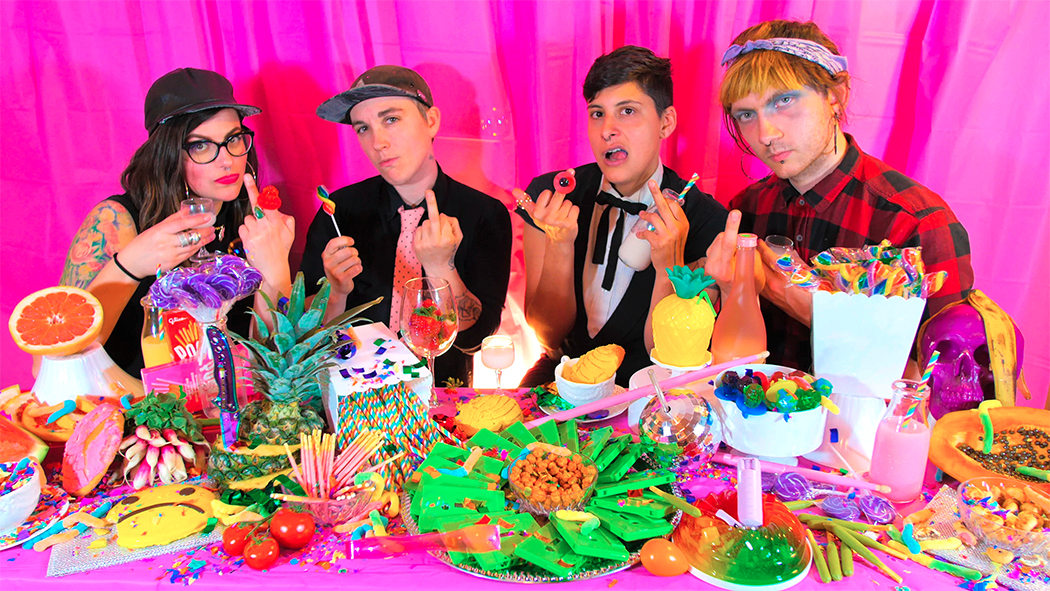 What topics will Queer Cafeteria cover in future episodes?

QC: Immigration, race, the environment, punk and pretty much anything that folks want to see and that queer folks want to talk about. We’re open to suggestions. In honor of May Day, our May episode will discuss class and queerness. And in June, we are planning on setting up a StoryCorps style booth at a Fed Up Fest fundraiser which will also be Queer Cafeteria’s six-month anniversary party. We’ll use what is shared with us that night in an upcoming episode. So, if you’re in Chicago on June 17, come out to Reunion from eight until midnight.