Tabs: A “Buy” Button, Diplo's Dickpicks, and How to Piss Off Brooklyn Girls.

What is Cybernetics? Musician and Artist Heather Hall has been studying it for years, and still doesn't know for sure, but has lots of great stories about it.

Hi, I'm taking over Browser Tabs today because Tyler spent all night working on something special for our subscribers and his eyes are bleeding. So here's what was on my browser this evening.

I'm one of the lucky few who's never had to deal with Comcast myself — it's always been one of my housemates. And listening to this nightmarish conversation between a Comcast representative and a customer trying to cancel his service makes me happy I've never had to. Complaining about bad customer service is an American national pastime that I haven't come to adopt yet, but I can finally sympathize.

I kinda love how the Internet is flooding with ‘think pieces’ on Lana del Rey's Ultraviolence right now. The New Inquiry released a supplement magazine called Ms. America, with 8 essays on how Lana del Rey perfectly represents our apprehensive love for America today. Then there's this AlterNet essay, which interprets LDR's message to be:

21st-century America is a rotting corpse, deadlocked culturally, economically, and politically. Since there’s nothing we can do about it, let’s enjoy ourselves as the body-politic disintegrates, perhaps by savoring some toothsome bites of the past: candy-colored Super 8 films, juicy jazz tunes and clips of sultry screen sirens. The future is a retrospective. [...] What Lana Del Rey is selling is what a big chunk of America’s youth is feeling: contemporary capitalist society is a deathly bore.

It might seem like the NSA revelations and no-privacy-for-anyone-ever-again is a new frightening aspect of our digital reality. But as early as 1971, technology activists proclaimed that computers will be used mainly as a means of oppression, to further military and police systems, and to maximize profits for large corporations. They also talk about racism and sexism in tech.

The apocalypse movie is truly the movie genre of our generation. So it's perhaps no surprise that a British filmmaker is trying to represent the “family endures crisis together” story via a same-sex couple and their daughter. You can now watch the trailer for Credence, which is marketed as a gay sci-fi movie. If this is any indication, we can probably expect this genre to survive another couple of decades, as lesbian couples and polyamorous and trans* people get to be the subject of dystopian collapses of their very own. Hooray.

The film critic who coined “Manic Pixie Dream Girl” is apologizing for coming up with this term. In 2007, he defined MPDG as a fantasy figure who “exists solely in the fevered imaginations of sensitive writer-directors to teach broodingly soulful young men to embrace life and its infinite mysteries and adventures.” He saw it as a fundamentally sexist trope, and has been terrified to observe its pervasiveness, and how often it's received as a liberating portrait of women. Proof of that you can't control what culture makes of your creative products...? 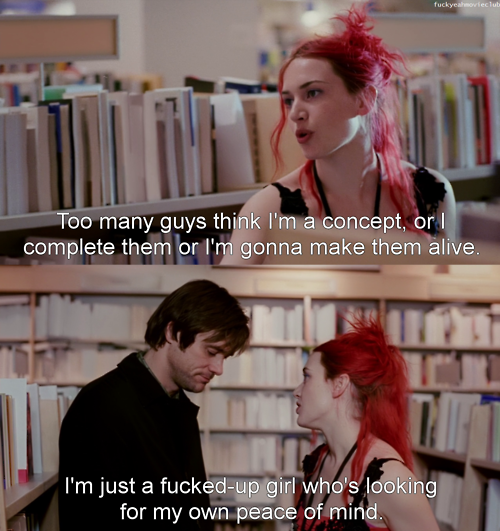 A designer duo at a London-based studio is responding to the world's shortage of resources by starting to use human hair as construction material. “Hair is one natural resource that is actually increasing globally.” The more unequal the world gets, the more poor people are lumped together with animals in terms of rights and acceptable treatment. “We are used to people selling their time, skills, goods—why not their hair?” Right...

Relatedly, a cosmetics company is developing a wrinkle treatment using baby foreskins — yep, the flap of skin sliced away during male circumcision.

This visualization of the world's economic center of gravity is pretty cool. So is this web app which visualizes the daily movement and income of NYC yellow cabs.

And an interesting study: our moods might be heavily influenced by intestinal bacteria.

A billionaire is trying to break California into six states, and on Monday he gathered enough signatures to place it on the ballot in six years. The reasons are pretty obvious: rich people don't think people in the city deserve their tax dollars. Assholes.

Everyone has lots to say about the practice of tipping and the working conditions of tipped workers. But here's a story that should silence at least some: the tipped minimum wage hasn't increased in 23 years, and the subsidy provided by customers in restaurants, salons, casinos and other businesses that employ tipped workers is larger than it has ever been. In other words, tipping well has never been more important.

Meet the Swede responsible for eight and a half percent of all Wikipedia entries — 2.7 million articles. Well, most of his entries are actually created by a bot. Perhaps he's to blame for all the medical misinformation on Wikipedia.

OK, the real news, with special thanks to another unpaid news aggregator: Eli Meyerhoff.

The Palestinian death toll from the Israeli attacks has now surpassed two hundred people. The Israel Defense Forces is blaming casualties on Hamas, saying that it has warned people to “move away from military targets”. Meanwhile, reporters affirm that there is no safe place in Gaza right now, not even for foreign news teams. That they agreed to a five hour cease fire tomorrow to let in humanitarian aid into Palestinian territory only seem to reinforce this point.

So far, we've stayed on the bench with respect to putting out a longer piece about the hostilities between Palestine and Israel for two reasons, the first being the latent anti-semitism present in so many of the amateur geopolitical pundits on Twitter, and second because our position is a rather hopeless piece of bathroom graffiti: No Hope for Palestine, No Love For Israel. Nevertheless, the disturbing stories abound, and should be echoed. This one really pronounces the genocidal and apartheid-esque nature of the attacks on Gaza: Israelis gathering to watch nighttime bombings. As Eli wrote: this is “reminiscent of Jim Crow-era postcards of a smiling crowd at a lynching”.