July 2016 Horoscopes The thunderstorms of July break trees, electrify the air, and reduce all solid earth to viscous mud. We don’t get to sit this one out.

On Beauty Traveling beyond the surface with Fanta Sylla and Kyrell Grant, two beauty enthusiasts. 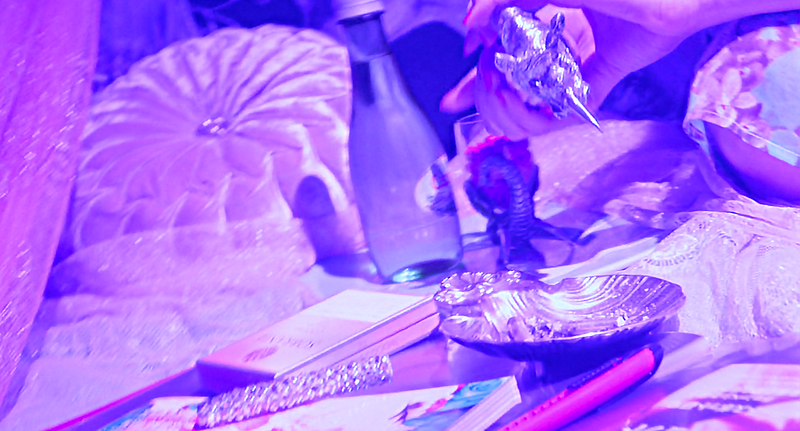 Protect me from what I want.

“I now have more emails devoted to my consumption than my labor.”

When I open my email I hit delete, delete, delete over and over like a ritual. “Sale Sale Sale” screams out at me, but if I dare to look I’ll spend money I don’t have. I don’t have the time either. But that’s the thing about obsession, it doesn’t try to fit itself around your lifestyle, it actively seeks to destroy it. I don't know where it all started but there’s no going back now. I’ve come to view my unwavering addiction to the art of clothing myself as a coping mechanism. I've tried to stop critiquing myself so harshly for it. I’ve stopped trying to add up the hours I spend on it and admonishing myself for not devoting those hours to more “useful” labor. All the same I feel depraved, a wild animal stalking prey that never leaves me satisfied. There’s always a website I haven’t checked out yet, a new thrift store a colleague mentions in passing, a sample sale that promises up to 75% off of a designer I could otherwise never dream of being able to afford.

We are told to want, and then blamed for wanting.

For me, a balance between giving in to my obsession and ignoring it completely is a necessity. Both extremes are an indicator of dangerous shifts in my psyche. A period of frenzy where I devote far more than is reasonable to cultivating and maintaining my wardrobe is a sign of boredom, dissatisfaction, a feeling of loss of control over the day to day. I become a fiend, a crazy energy comes over me, I must find a certain item of clothing or I’ll never feel calm again. Most of the time, like all obsessions, like all anxieties, it’s a distraction from what’s really bothering me.

Consider: If I am unable to control the swirling mass of confusion and darkness on the inside at least I can take charge of how I appear outwardly.

One of the symptoms for depression on the blue-tinted informational poster hanging on the wall of the doctor’s office reads, “loss of interest in activities patient formerly found enjoyable.” I didn’t shop for eight months. The clothes I had previously accumulated stayed draped on their hangers while a small pile of clothes, in various conditions, formed my practical uniform – a rotation of pants, skirts and tops that would get me through the week without an iron or spot of stain remover. Sometimes fashion magazines do that capsule wardrobe shoot and it’s always like “mix and match these 10 chic items for a fuss free summer wardrobe.” Well, my depression wardrobe was nothing like that. It was instead a selection of my least chic items and no matter how I mixed and matched them getting dressed was always full of fuss. I was barely eating or sleeping and every time I looked in the mirror a skeleton with dark pools of sadness under its eyes stared back.

When there’s no light at the end of a tunnel it no longer matters to you how you look as you walk into the darkness.

I grew up in a house filled with clothes and books about clothes and old Vogue magazines. One of my mother’s favorite things to do was go thrift shopping. Another was cutting, dyeing, sewing, and reassembling old garments. She was a fabric snob but politically correct regarding condition. Holes, stains, loose hems, missing buttons never phased her as long as we were fingering silk, satin, linen, cotton or wool. She instilled in me a love of quality, design, drama. Back then there were ways of bypassing the fashion hierarchies formed from cost if you knew where to thrift shop. Things have changed since then, with the introduction of more and more budget clothing manufacturers, the popularization of vintage clothing and the advent of the Internet, so the likelihood of coming across a pair of pure wool Comme des Garçons men’s trousers at your local second hand establishment has thinned. That is, unless you have time.

In our current economic configuration, time is to be devoted to production or consumption. After you’ve produced, you are rewarded with pay which you are then expected to spend. In a small way, the devotion of my time in between production to seeking out bargains, trading, selling, and giving away my old clothes feels satisfying. In not such a small way, I feel grotesque. I feel like I constantly have to justify myself. I open up Tumblr to a question from anon that reads, “I don’t understand why you're so obsessed with fashion. You’re smart, intellectually and politically engaged, yet you expend hours of your time obsessing over frivolity. Imagine how much writing you'd get done if you stopped caring about clothes?” Putting aside the obvious creepiness of this question posed by a total stranger, it struck a chord, it gnawed at me, it inspired guilt. It also gave voice to the feeling, possessed by many whose political and artistic sensibilities are similar to my own, that it is necessary to eschew aesthetics, trends, whatever is currently deemed “cool,” in order to be authentic in your beliefs and pursuits.

Why do so many people on the left hate girls liking the things girls like?

I'm tired. I’m tired of feeling like some of the things I devote my free time to are unworthy. I’m tired of feeling like I should be doing something else, and of the anxiety that feeling produces. I'm tired of people with more money than me counting my money for me and advising me how best to spend it. I'm tired of poor people being criticized for wanting to enjoy the spoils of capitalism when no six-figure salary man gets questioned about why his Armani suit is necessary. One thing I’m not tired of is people, especially the marginalized, finding ways to express their identity through fashion. I'm not tired of the alternative fashion economy that's been created by those who could never afford to be part of the mainstream one. I'm not tired of the sense of joyful calm that comes over me after a particularly good fashion find. I wish I could calm my mind down in a different way, one that's more directly productive or that would enable me to write more prolifically. I'm working on balance. In the meantime, I'm appreciating a renewed interest in activities I used to love.