Horoscopes for January 2017 Sometimes an opportunity looks like a crisis. Who do you want to become? 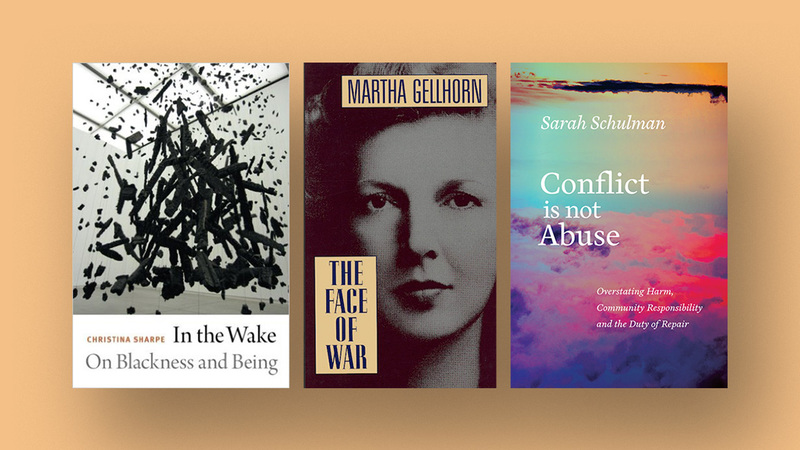 In general, books and people who read are more agreeable separately – nothing is irritating like a packed bookstore. In the weekends after the presidential election in November, I did my usual spins at McNally Jackson, where more people seemed inclined to pick up door-stop-sized books and there were at least three separate conversations about how “man, I just needed something to take my mind off of things.” The real reason for escapism was skirted over in favor of a generally heartening, supportive mood. In times of devastation and confusion, perhaps some of us rather need to put our minds to things. I asked around for some ideas of what we can read to help make sense of how to move forward as our world falls under the weather.

This entire year I’ve been reading and re-reading The Face of War by Martha Gellhorn, which I think is the best book of war reporting of all time. Martha reported on both world wars and the introduction to this is like getting the shit kicked out of you. All the naivety, anger and confusion I felt before I opened this book was eaten after the opening chapter. It angers me that the movie of Gellhorn’s life was so trash, because Martha truly deserves so much better and to be remembered for so much more than her relationship with Ernest Hemingway. She was a better writer and reporter and she constantly warned people what was going to happen before it happened, while nobody listened to her, ever. I have been telling people to read this book since I picked it up (to be fair, my friend Max also gifted it to me) and I am going to keep doing it probably until I’m blue in the face. Martha is unflinching. She has seen every act of ugliness in the world for generations and does not believe journalism will save us or guide us, but that it is vital anyway to tell the truth of the reality of the situations from the front. I don’t know if I’d consider this a comforting read in the sense that it gives me hope, but it gives me clarity and it gives me strength to understand and read about how to navigate telling awful and implicating stories without being irresponsible about it all. That’s important, too.  —Arabelle Sicardi

In the Wake: On Blackness and Being by Christina Sharpe is work that holds space for what is unbearable and insists on letting it remain unbearable. Sharpe asks, “How does one mourn the interminable event?” The wake, for Sharpe, is the 240 years of legal chattel slavery, whose intentions and affects still continue – the total global atmosphere of anti-blackness. Sharpe works the wake – what she calls “wake work” – with wake’s many forms: vigil for the dead, path of the ship, line of recoil of a gun, consequence of something, the state of coming to consciousness. I don’t think we can hope to go anywhere different than where we are now if we don’t take heed of Sharpe’s wisdom and “recognize the ways that [Blackness is] constituted through and by continued vulnerability to overwhelming force though not only known to ourselves and to each other by that force.” —Johanna Hedva

Sarah Schulman’s Conflict is Not Abuse is a difficult, imperfect book, but the ways it seeks out and finds connections between our interpersonal issues and broader national conflicts are important and necessary. In a time when so many of us are struggling to find ways to work together for justice while disagreeing on both means and ends, Schulman’s analysis of shunning, the language of abuse and supremacist mentality is more critical than ever.” —Merritt K