Good Books for Bad Times In times of devastation and confusion, books that help make sense of how to move forward.

Fake ID Dismissing certain positions as “identity politics” is not going to get us anywhere. 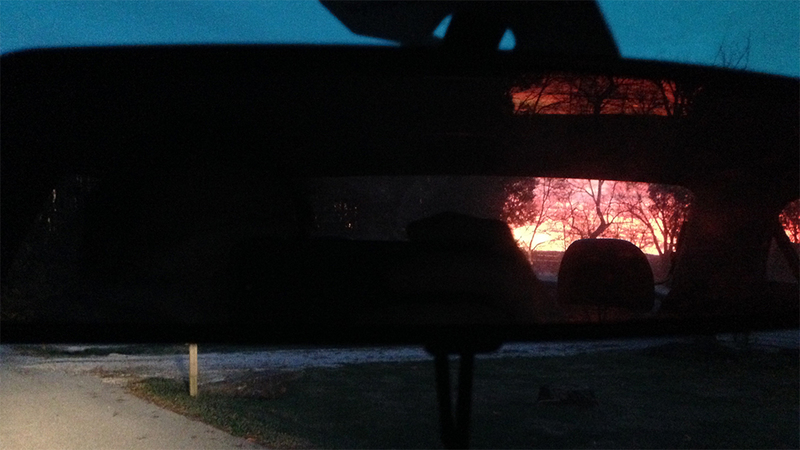 Somehow, some way, we have arrived. Now let’s get the fuck out of here.

The new year, moving in from the east with the rotation of the earth, seizes me in my little Brooklyn apartment where I sit sipping bad coffee. All of a sudden, I’m not simply browsing twitter’s “fuck 2016” sentiments; I’m faced with a whole new year, and must reckon with the other’s passing. An ensemble of questions sound palpably. What is to come? Where did the last month go? The future is here, but what has it brought? “If only I didn’t feel like I already know the answer.”

It seems that every year I manage to ignore the new year’s arrival until it is right on top of me. I’m always distracted by the pressure of my family’s annual get-together, and then of course by its aftermath. But on the last day of December, usually at midnight, it sweeps in like a rush, an impossible tidal wave of time’s passing, the world, humanity, everything. It’s all rolling in a dense flood, oozing in every direction toward the future. The magnitude overtakes me, I’m pulled under swift currents of detritus. This year it happened to hit before noon, in the broad light of day, and for whatever reason, my being/becoming in this new year was heralded not with a bang or even with a cartoonish ‘vroom,’ but with a gurgle, accompanying one last big gulp of all the stuff that the symbolically deficient “fuck 2016” brutishly denies. There’s no retort to be made; I’m just whispering inside, please let the catastrophe end.

Because, trite as it may be, it does feel like things are getting endlessly worse. Most people I talk to say that they feel it too. While the list of miserable conditions and individual crises lengthens steadily, deep sorrows multiply beyond any account. To lose my friend Clark Fitzgerald was unimaginable. To lose Feral Pines to the Ghost Ship fire was unimaginable. The last two months I’ve spent trying to understand what I feel and I just can’t. I can’t account for sorrow like that, not down in its depths, nor out in its reaches, where it is shared all too easily, as we all keep losing the most lifeful people, those we don’t want to understand life without.

Still time keeps insisting on itself as a measure. I am chilled as I sense the apparitions it sends to remind me that I must give in to its rhythms. I do as I’m told, I affirm the tallies and keep ever attuned to the calendar, to dates, to deadlines and periods. Oh, my, where to begin? Where am I? What have I done? Was it worth it? Why didn’t I write down something every single day from the moment I learned to write? What the fuck is wrong with me? Today I might have several volumes full of scribbles, ripe with doings and beings. I could be reading about what I did at this exact hour, twenty years ago.

Whatever it is that I do or don’t do, time moves on, and meaning making is measured by number, primarily in years. But dates do not only mark where time passes by; they also mark where it escapes, like water through your hands. And, like with water, something remains, some trace.

When I first considered moving to New York, what I really wanted was change. I’d already tried a remote locale – Nagoya, Japan – so I was thinking more about the internal change this move might entail. When I finally left, I drove with a dear friend straight through the night, over bridges and through tunnels, stopping only for fuel and sustenance. Each sundry little town we stopped in, each place choked with commerce, heightened my instincts towards escape. What use is feeling grounded if there are no good places? What is a person’s ground? "Obviously it should be your self."

Throughout my life, self-critique has been such a persistent bane. But it wasn’t always unwelcome. Many of my first politically-charged relationships turned around communicative processes of opening up in mutual critique. I remember how real it felt, wanting to be known, to be authentic. Is that an expression of some early childhood trauma? Charismatic inferiority at work to achieve a dreadful and unprepossessing maturation? Ahem.

Radicals (or whatever) are not typically psychologists. At times I think we’re incapable of properly judging communicative gestures, for example, or the meaning of books – let alone analyzing ourselves. I don’t expect others to inquire about the point where my irresponsibility becomes responsibility, where my jokes turn serious. Why should they? Yet we knowingly strive to reveal the game without fully understanding its causes. I feel it in most every group conversation. Still, though, I fancy conversation, and I revel in people, and it’s hard to say how it matters what drives me.

Driving through those little towns, which like each of us claim their own inconsistency, we screamed out loud together: before any good news there’s dreadful terrible awful news.

One of Kafka’s parables tells of early children who were once given the option to become kings or messengers. He wrote that per the nature of children none wanted to do the work of a king, rather each wanted to be messengers, each of them wanted to speak and each wanted to be heard. And so there were no kings, only messengers, and they all ran around like children screaming at one another. Each child came to develop a double consciousness; a simultaneous awareness of their problematic scene, and an earnest desire to find a way out of it. Perhaps due to an old world allegiance to the message, an oath to truth, they could not quit.

I think of this not to draw attention to a lack of kings, but rather the plight of information as it is now, overwhelmed with messages charging through reality sounding meaninglessness. Why can’t it stop? "Capitalism."

News in modern terms connotes actuality. To ask for the news of the day, is to want to be told what happened. We want to assess the global situation by staying informed of current events. In former times, however, like pre-television media era ancient Greece, it merely signified a message’s presence. A simple message would be delivered by a simple messenger and left to its receiver's interpretation – not to be taken as truth. The message is to be used like a bridge over the abyss, toward the potential understandings of an event. Today the hot button issue of “fake news” reveals this early definition of the message, and we are reminded of the interpretative quality of a news story. Whatever understanding we generate from there very well depends on what bridge we take.

The metaphor of building a bridge is used to situate what-is-there or must-be-built between people, the environment, and our potentiality. Perhaps up until we win back a common access to the truths, though, the surface is not our place to find understanding. In the contemporary era, we may well be obliged to live in darkness for some certain and uncertain time to come. In that case, more than bridges, we’ll need tunnels. Tunnels through potentially dark times. Tunnels are bridges obscured from the surface sight, key in aiding our escape. We wouldn’t be mining for knowledge – the information age has littered the surface with that – we would be tunneling for the sake of it. And inside the tunnels, we could generate our sublime ethics. At least, we should begin to dig them out away from here, away from now. 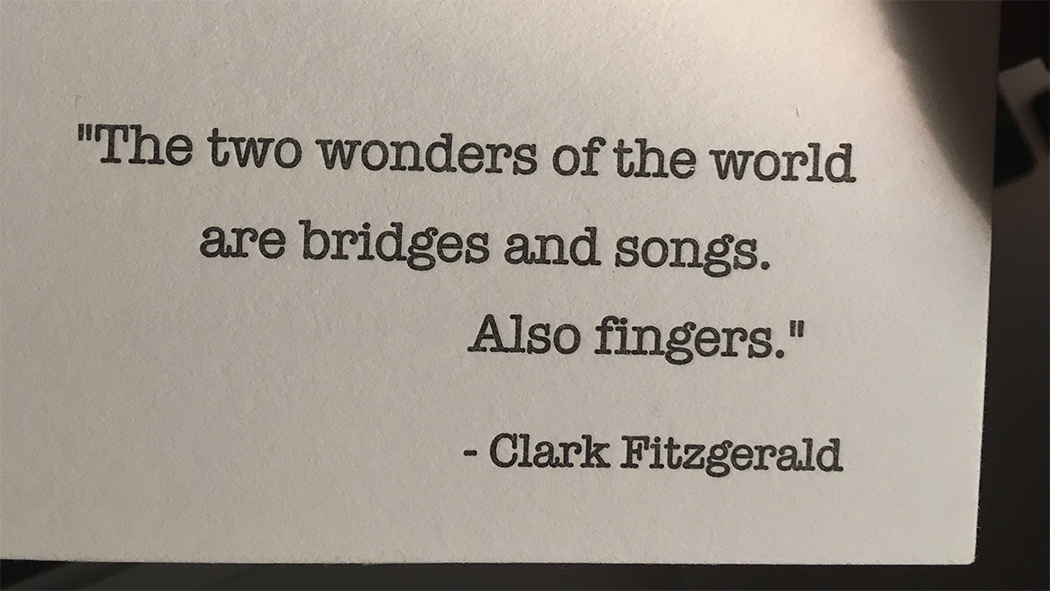 The winter solstice passed some ten days prior to the year, yet winter persists. I mean to consider thoughts of warmth in this time when whatever leaves remain on branches flitter against the cold. Leaves or none or few, I sense an impetus to address those of us still wondering if we'll ever wake up in a good mood again, together sick of ill will bearing down from that trumped-up tower.

It is a pleasure, but I am not here to bring in this new time with holiday cheer, following the presidential election/preceding the inevitable inauguration (#disruptj20). But to think amid dismay. To think and act so to make sure that this terrible tension doesn’t take us away from ourselves and each other. The crisis projects permanence now more than ever. Here still it sits as it did long before new year's. Amid it the territory is overtaken and in times like this it may appear as if there’s nothing we can do about it.

This is the escape issue where we shirk the normality of time, address the crisis, and descend into the nether world of our thoughts and friendships, into curative undergrounds of our relationships with each other and ourselves. 2017 may come to make 2016 look like 2015. Its walls are closing in and it’s time we plan our escape. This January day 2017, let it be known that we made it through. Yes. Take that. You deserve it. Somehow, some way, we have arrived. Now let’s get the fuck out of here.