On the Ground at the Anti-Inauguration Riots

Black Data From slavery to political campaigns, black lives have been reduced to numbers, commodities, and revenue streams

watch the trailer for I AM NOT YOUR NEGRO, James Baldwin's powerful last words 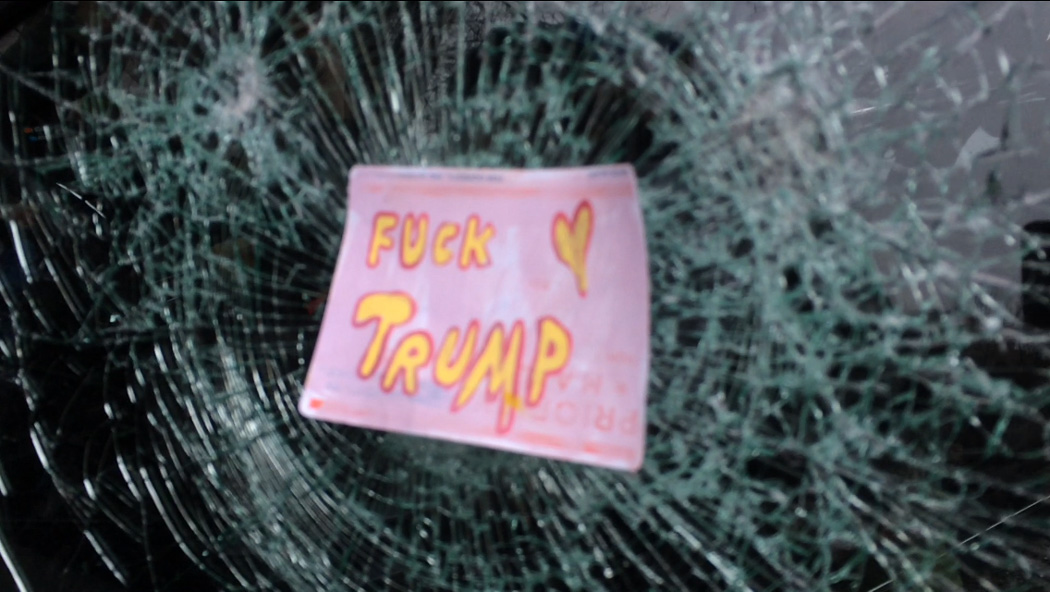 On the Ground at the Anti-Inauguration Riots

Before the DC police arrested 230 people, the energy was ecstatic

I woke up on January 20 with little sleep and filled with anxiety. ¶ I made my way to Logan Circle for a 10:00 am anti-capitalist/anti-fascist bloc meetup. I was late but made it just minutes before they started marching. It was beautiful to see. All around me lay a sea of black, moving through the streets of DC. Fireworks went off and radical chants rang. The energy was both calm and ecstatic, joyous yet focused. It didn’t take long before cops appeared and started trailing us, but the march bravely continued.

At first, aside from a few garbage cans being thrown into the street and some light graffiti work, things seemed relaxed. Ahead of me to my left though, I noticed a Starbucks and a Bank of America right next to each other.

“Oh shit it’s a wrap!” I thought and sure enough, the smashing began. The sound of glass shattering was met with loud cheering. For the moment, the bloc was too large and too confident for the authorities to do much, other than admire the thoroughly redecorated establishments left behind. 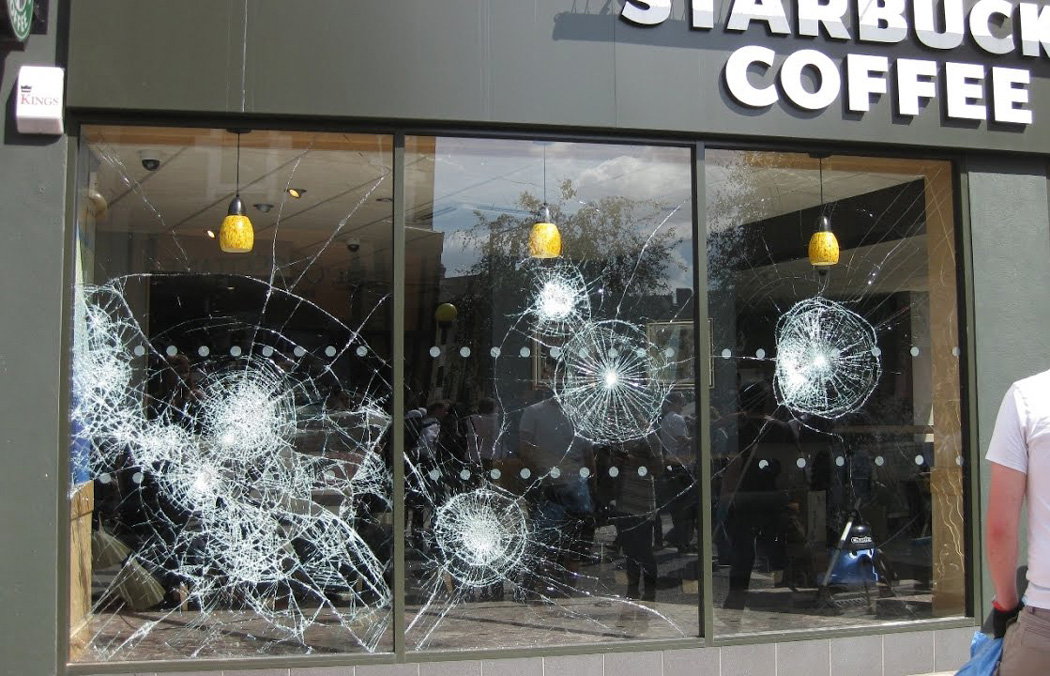 The crew made its way through the streets, and more commercial property got the same treatment. To my right, I saw the now infamous limousine being smashed up with the two vehicles beside it.

With all this smashy-smashy of corporate property going on, it didn’t take long for the cops to call in more forces.

Being used to the NYPD, I was expecting them to simply outnumber, beat, and arrest everyone. Instead, the DC police sprayed people with pepper spray and shot flashbang grenades into the crowd. The group tried to evade them. Some began to change their clothes in the streets. Everyone ran. Several times I thought I’d fall, but friends grabbed me and we helped each other get away.

Explosions going off all around, the air reeked of the stinging scent of pepper spray. Fate was looking kindly on me and my friends, though. We got separated from everyone else after we ran down the street, and the rest of the black bloc, followed by the cops, ran another way.

Minutes later, the remnants of the bloc and anyone who happened to be standing nearby, were kettled in by an army of riot police. As some friends and I were trying to find out where the mass went, we passed a cop guarding a pile of black clothes and searching a backpack that had been ditched on the street.

When we found out that everyone had been caught, we made our way to a street corner nearby. We weren’t the only ones. There, a substantial crowd of protesters swelled.

The small army that had just kettled hundreds of people were now themselves surrounded. The crowd encompassed the police. While the cops slowly processed the detained protesters, the outer force yelled anti-police chants and messages of solidarity to everyone inside the kettle. Pepper spray, tear gas, and flashbang grenades shot out again. 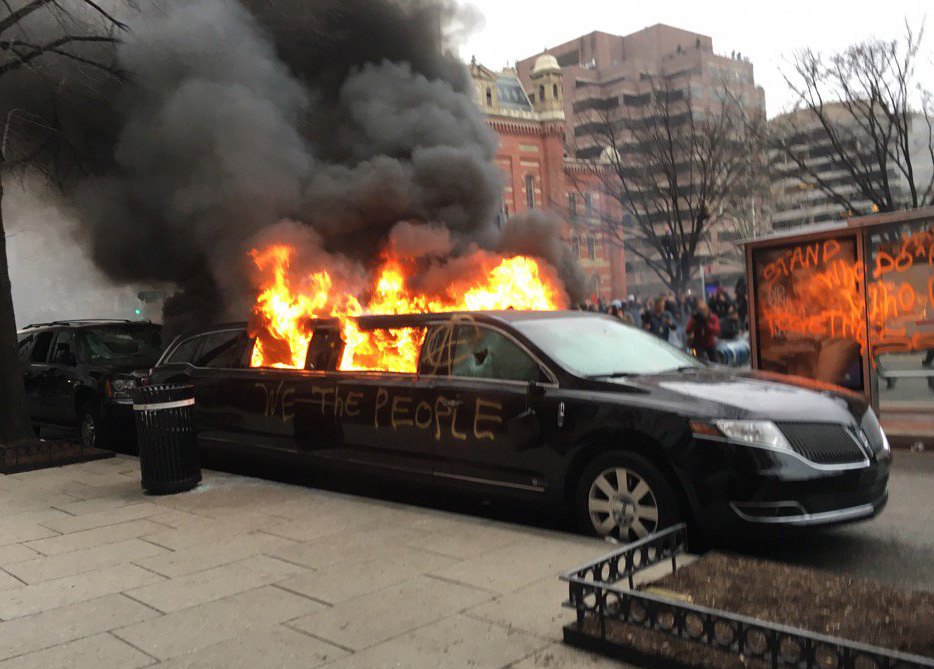 The protesters were pushed to K street where yet another standoff began. Police fired grenades and pepper spray at the people for what seemed like hours. I had to leave to rest for a moment, but just as I did I received a text message informing me that the limo had been set on fire. I ran back, witnessing even more pepper spray, more explosions being fired by the police.

I watched protesters flee from an incoming grenade and then shortly after make their way back to the frontlines. It gave me flashbacks of the student protests on La Alameda in Santiago, Chile in 2013, where radicals and student protestors faced tear gas and other weapons in confrontations with the police. People were learning, right then and there, how strong they can be together.

As the sun set, protesters maintained the occupation of K street despite police violence. A weird detente happened. While cops maintained their kettle, still holding hundreds near 12th and L, 14th and K street was liberated territory occupied by all those who didn’t get bagged. The mood was Dionysian. 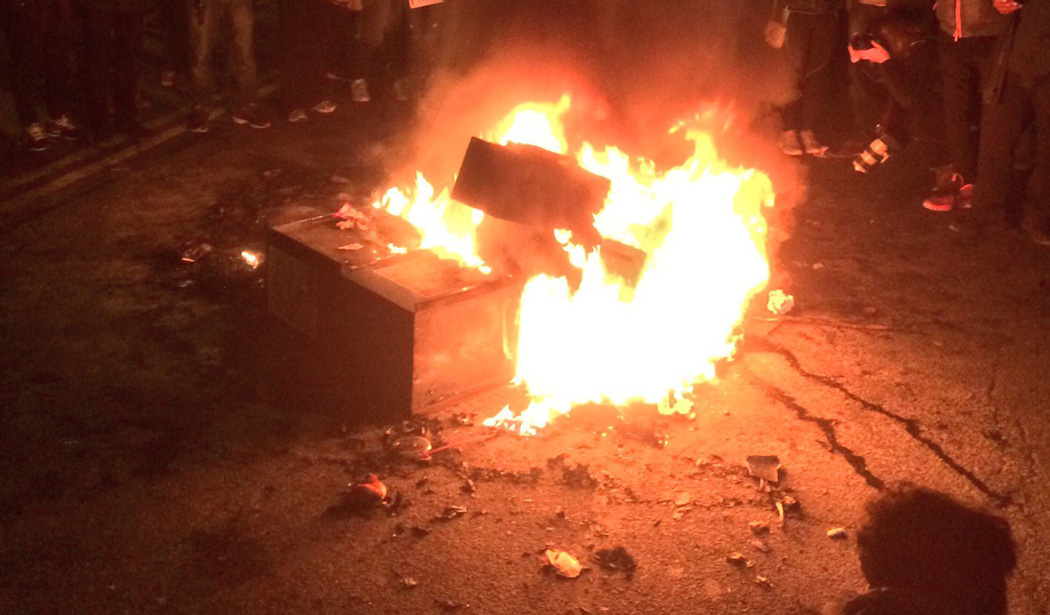 Fires burned in the street, people played music and chanted “Fuck Donald Trump!” Kids on bicycles did wheelies. Flags and MAGA hats were thrown into the flames. Trump supporters and anyone else who was obviously headed to the Inauguration Ball, were chased off anytime they came too close. For a good moment, the protesters ran the street. The entire time, though, I knew the others were just a few blocks over, being detained and arrested.

When they eventually came and pushed the protesters off K street, the crowd simply moved a few streets away. That’s the point where I left though, exhausted, hungry, and wondering where I’d go to do jail support for arrested friends. I heard they were all smacked with felonies, and I knew that I, along with several other comrades, would be in court the next morning.

Despite over 200 people getting arrested that day and Trump being sworn in, I felt like the good guys scored a win that night. The protesters were empowered and confident in themselves as they resisted fascism only blocks away from the White House. And I think that scared the hell out of the authorities. But now, the top priority is supporting our comrades in the courts the way we supported each other in the streets, so we can continue to rack up wins together.