This month’s horoscopes take a closer look at our intimacies, sexual and otherwise.

A letter from the editors on our theme for May 2014, Etiquette. 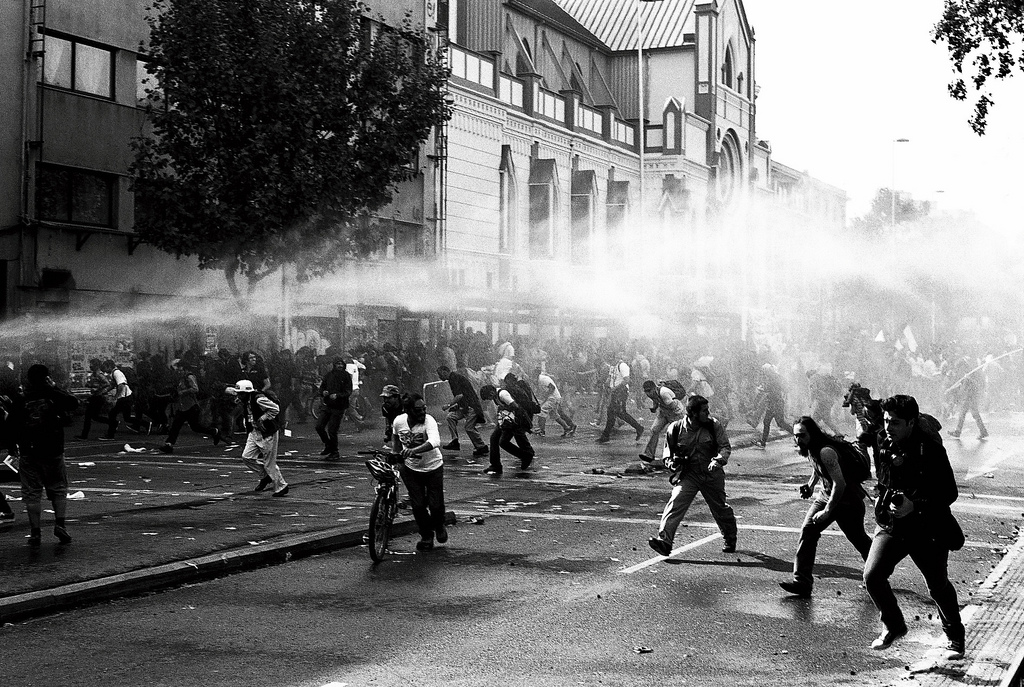 Photograph of May Day protest in Chile, 2012, by Kyle Anthony.

May Day All around the World

May Day is the shit. Mostly because it’s a day to celebrate not working. At Mask HQ all we do is work, but we’re taking it easy today to observe. Since we're constantly plugged in anyways, we thought we’d keep a running list of notable peaks in todays events around the world.

2:29:04 AM EST Crowds dwindling at Pine and Broadway. At least two more arrests.

1:54:39 AM EST Reports of police moving in. Livestreams down, which tends to happen right before the pepper spray comes out.

1:40:16 AM EST Partiers attempting to set another fire.

1:01:40 AM EST Reports of a standoff with SPD, as they attempt to kettle the street party.

12:51:05 AM EST SPD claims they won't allow protesters back downtown.

12:46:00 AM EST Seems like the march is not moving anymore and turning into a street party near Pine/Broadway.

12:03:43 AM EST Reports of anarchists changing into suits and ties.

11:49:16 PM EST Before the demonstration started, posters, spray-painted threats and even an effigy of a police officer set ablaze via Q13.

1:04:00 PM EST Police blocked the labor march as soon as it left Union Park, via @OccupyChicago.

More than 1,000 marching in downtown L.A. for #MayDay job and immigration rally. http://t.co/WYBBVGepod pic.twitter.com/AuR6DTR9CG via @NewsRevo

8:17 PM EST Police tries to stop protest, a couple of people arrested, but march continues downtown, via @aaronlakoff and @JaggiMontreal.

4:03 PM EST The cops have detained the Montreal Anarchist Marching Band in the metro, via @JaggiMontreal.

10:47 AM EST Reports that NYU has been occupied, via @seedyunderbelly.

9:42 PM EST Police and anarchist standoff at 16 and Mission, via @PinkXEdge.

8:36 PM EST Before the end of the demonstration, 40 were arrested and 20 injured. Notimérica

Helsinki police detained at least ten anarchists before a planned march through the city centre. YLE

Tens of thousands march against poverty in Barcelona.

6:13 AM EST Police clashes with antifa protesters against Nazi march, via @enough 14.

Sorta Halfway Between Europe and Asia

2:24:20 PM EST The Guardian publishes a decent collection of photos you can find it here.

Reports of up to 40,000 police on the streets of Istanbul, via @oemoral.