The Androgynous Womenswear of Cyber Crime 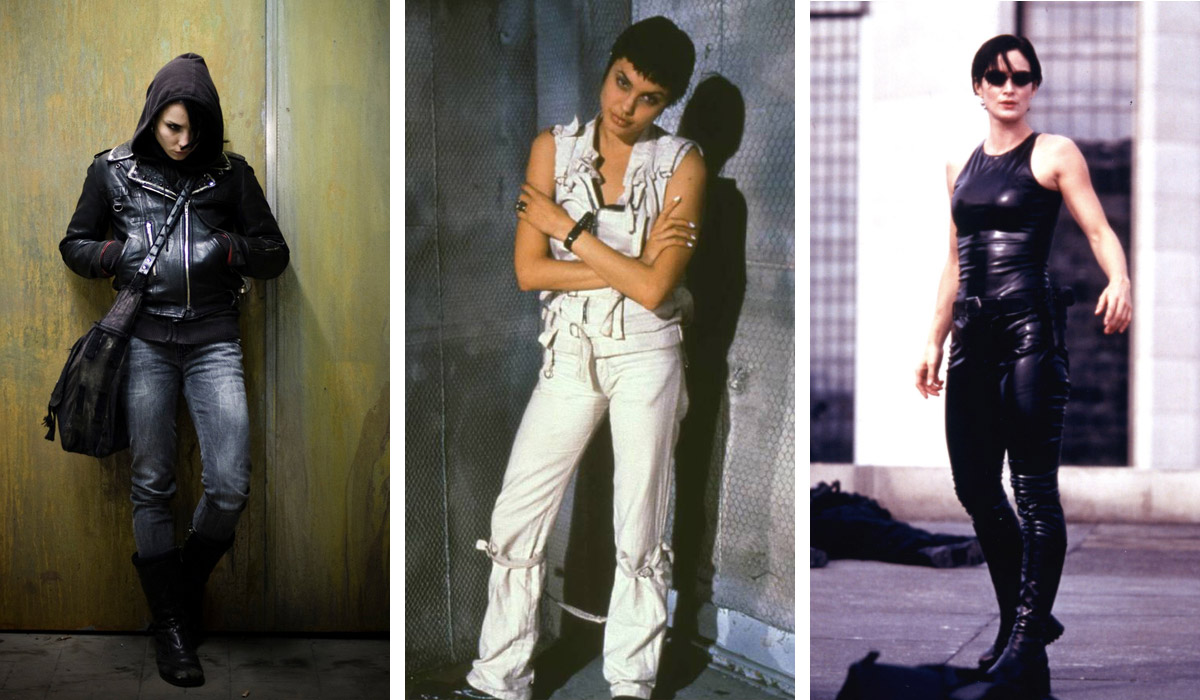 The Androgynous Womenswear of Cyber Crime

90s hacker fashion reemerges on the runway and among subcultures – from Rick Ownes, Gareth Pugh, and Alexander Wang to cyberpop and seapunk.

It’s 1995, after the dawn of punk rock and right in the middle of grunge. It’s here that we meet Angelina Jolie’s character in Hackers, Kate Libby, in a clean white, one-piece suit with a mock turtleneck and chunky, strappy boots, while she stares intensely at a video game screen and is surrounded by cyber imagery. There’s something uniquely futuristic about her appeal – her choppy helmet hairstyle with baby bangs and a monochromatic outfit – because until this time, we hadn’t understood women to be much a part of the cyber world and had no idea what they looked like. She was a hacker girl, and with the territory came a new fashion statement. 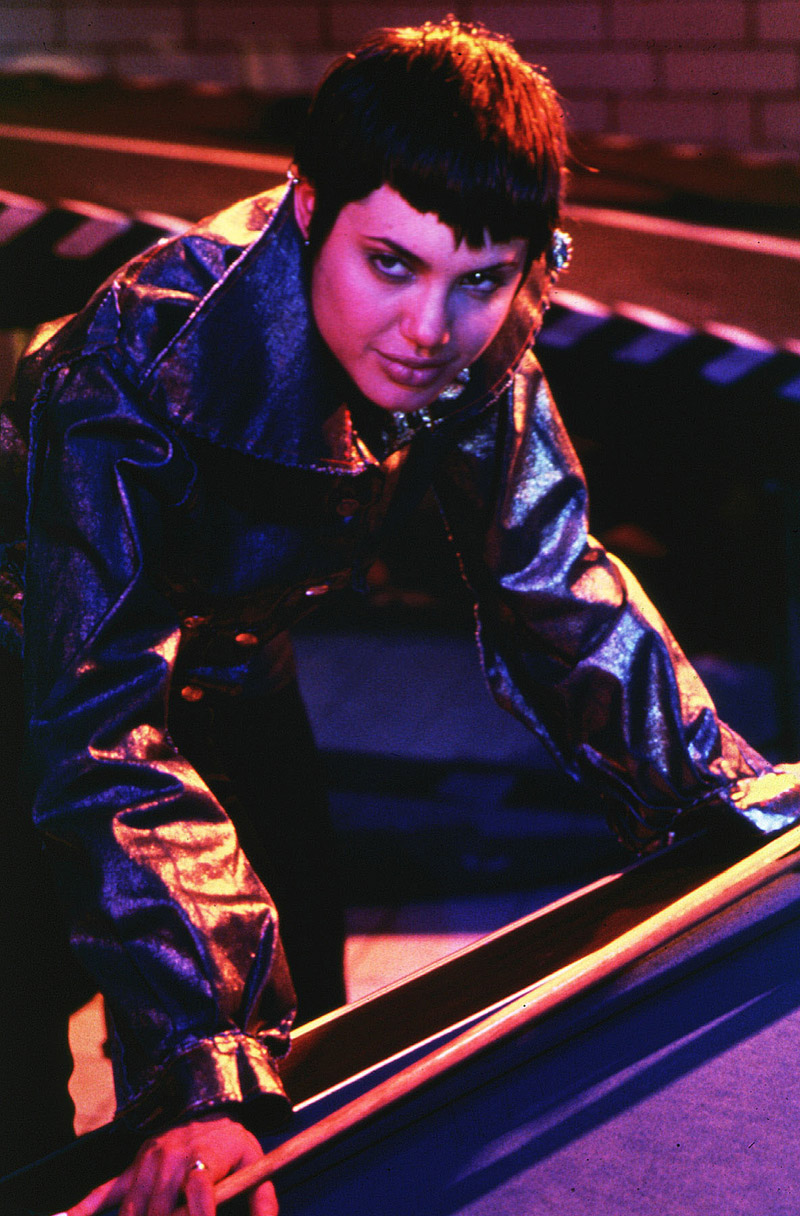 Hacker girls are a hybrid kind. When it comes to style, they are partially archaic tropes – the wounded soldier, the redeemer of the unknown lower class – and part evolved intelligent cyborgs, free from the constraints of mainstream style categories. They are lone wolves, consistent in one key pragmatic aesthetic: They choose armor. Leather jackets from motorcycle gangs, army cargo, tight black vinyl like superheroes, heavy boots, piercings. Every piece of clothing is chosen for its service or its message.

The style of women in hacker roles often reflects the definition of the word “hack.” Both “rough” and “cut” are close in reference and each give insight into the traditionally unpolished look and attitude that embody the hacker identity. Characters who have established the persona in TV and movies, most recently in 2011’s Girl with the Dragon Tattoo Lisbeth Salander, and previously Trinity in The Matrix (1999) and Angelina Jolie as Kate Libby in Hackers (1995), among others, have invariably defined the hard exterior of the hacker archetype. Lisbeth is an odd path punk kid with facial piercings; icy-eyed Trinity (Matrix, 1999) is forever associated with slicked-back short black hair, black sunglasses pinned to the face, and all-black, all-leather outfits; even 12 year-old Erica Dansby in Ghostwriter (1993) has a certain hostility backing her boyish style. 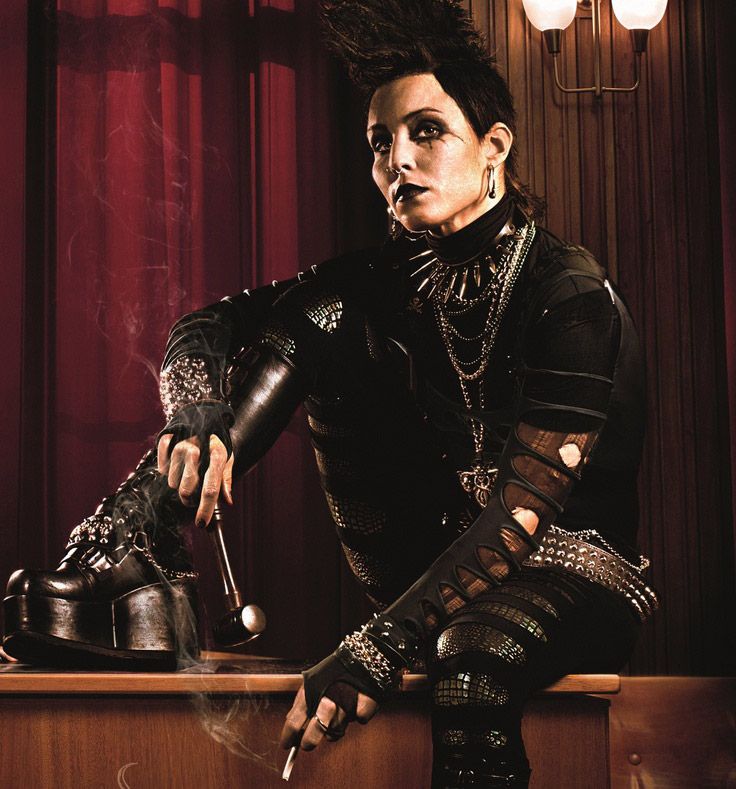 This is because in total take-over-the-digital-world mode, female hackers have to be badass. Rebellion is at the heart of their aesthetic and ideology, and they use fashion to communicate an attitude that flips the bird to the people who are against them. Within the realms of deep internet browsing comes the threat of vulnerability – while characters like Trinity and Motoko Kusanagi (Ghost in the Shell, 1995) appear invincible, they dress as if always prepared for a fight. Both Kate (Hackers) and Lisbeth (GWDT), too, sport a range of clothing that can all be considered protective. They stomp through difficult situations in big boots, wear wide-lapelled leather jackets high around their necks, army pants baggy enough for breathing room, leather cuffs, mock turtlenecks, silver rings that take up their entire finger, and thick silver chains. They specifically don’t wear color – including gold – likely in an effort to camouflage themselves and lurk their surroundings comfortably. 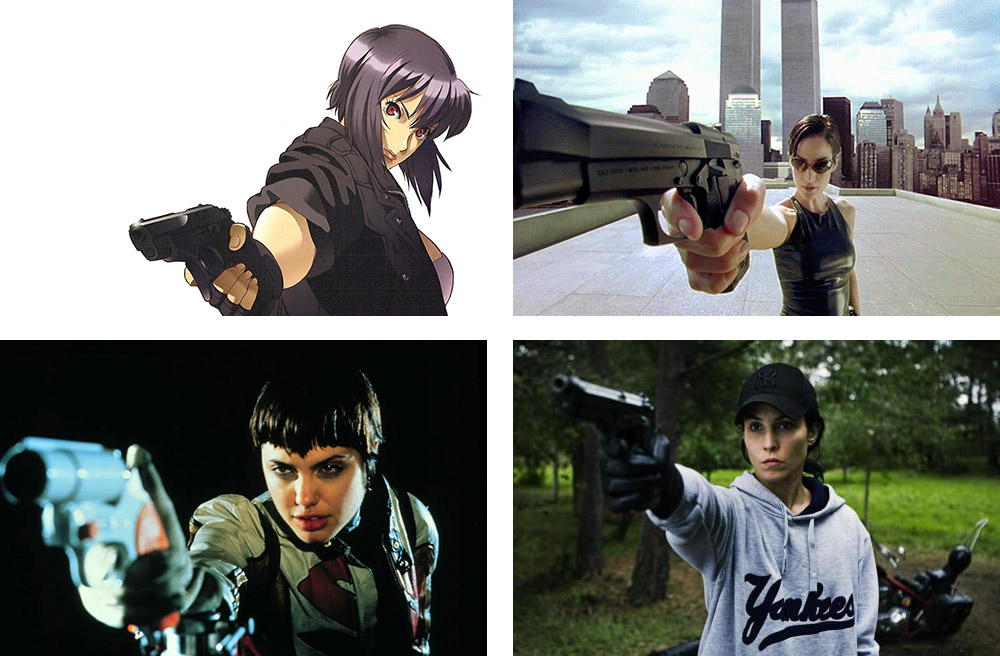 Renditions of the loner style have returned in the past few seasons – septum piercings, combat boots, and the ubiquitous anti-fashion fashion statement. We’ve seen Gareth Pugh rebirth dystopian-riddled cyberpunk looks that involve both tightly structured and loose, draping leather; Rick Owens’ post-apocalyptic futurism that’s both modern and archaic; and Alexander Wang’s all black and studded high neck dresses and front-laced black platform boots. We’ve reconnected with hacker influences likely because of our mutual proximity to the digital world, as well as to 1990s fashion and even 1970s punk inspiration – or perhaps because cyberpunk and hacker culture were the earliest to predict how much the future would be influenced by technological change. 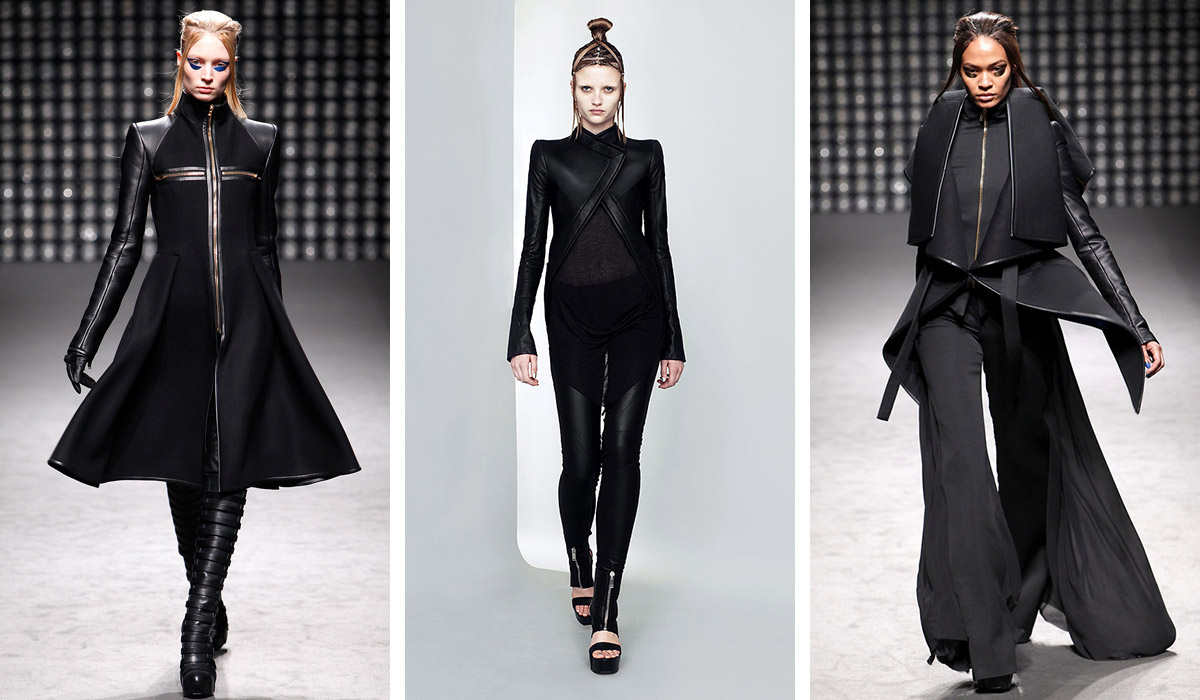 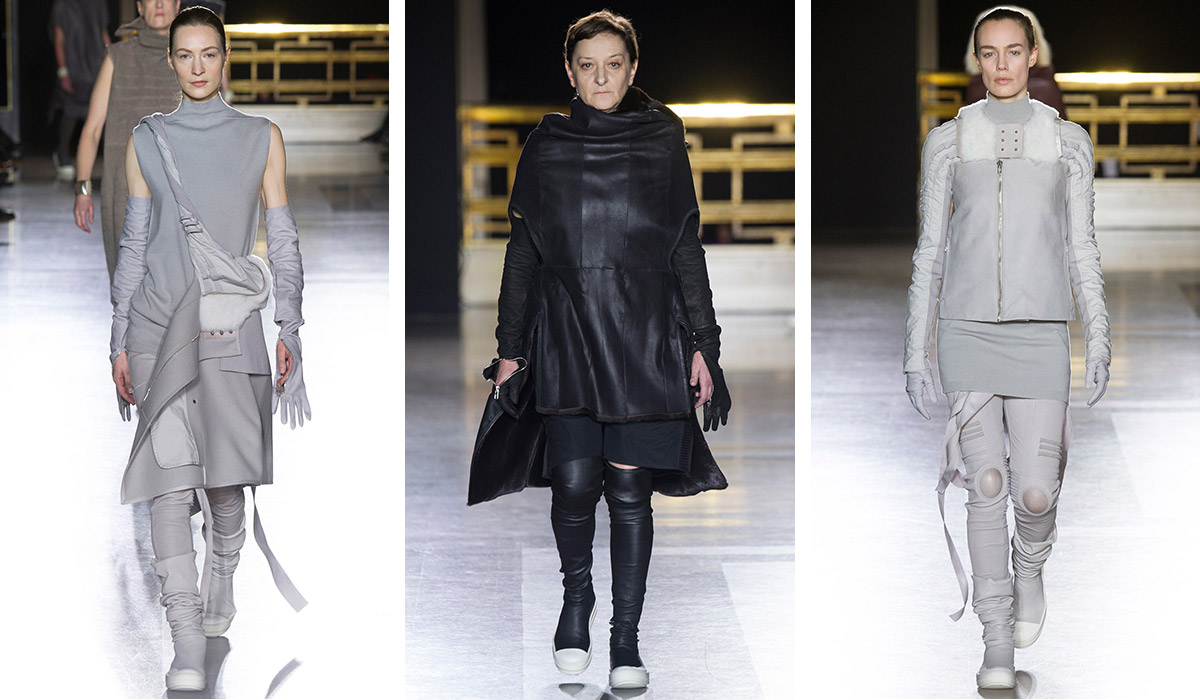 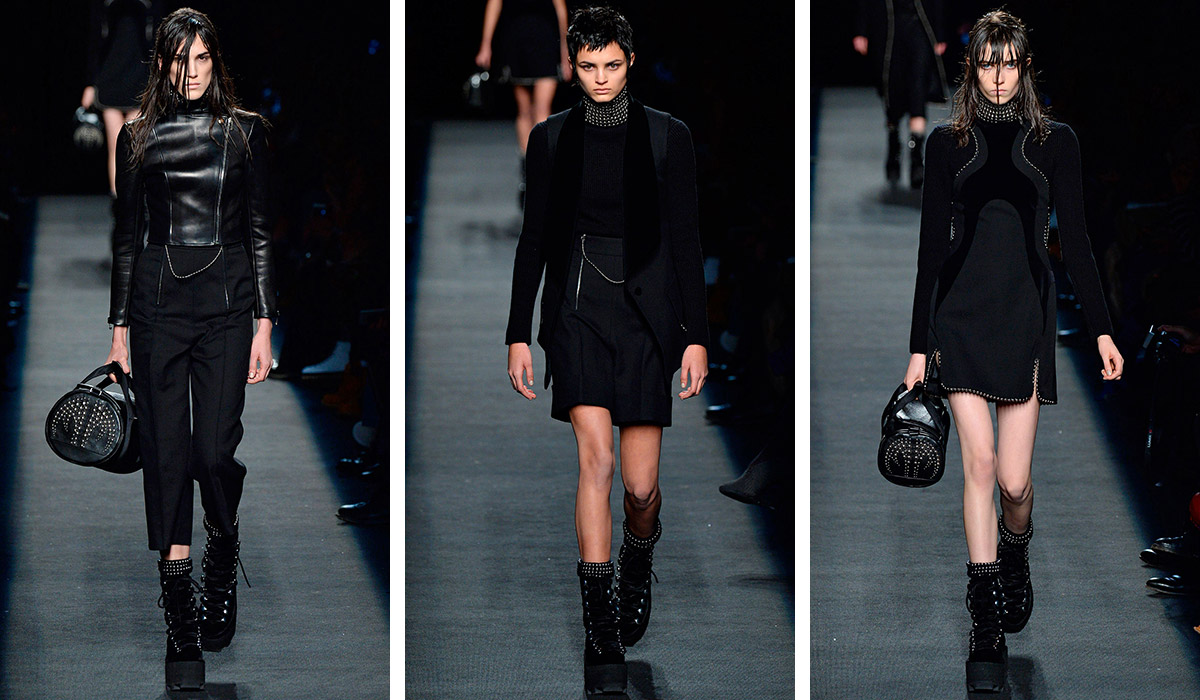 These styles have been reborn with ease again in 2015, a natural progression from the prominence of 90s references in general, all of which can be seen specifically in stores carrying gender-neutral trends, like Selfridge’s Agender store. On the runway, there was Vetements’ oversized leather jackets and plainclothes monochromatic hoodie sets; Beaufille’s mix of both soft and hard masculinity and femininity. The latest turns have glimpsed at a more extreme commitment to the style of hackerdom – half-shaven heads and black hair like Lisbeth Salander, necklaces like dog collars, and dark to black lipstick shades. 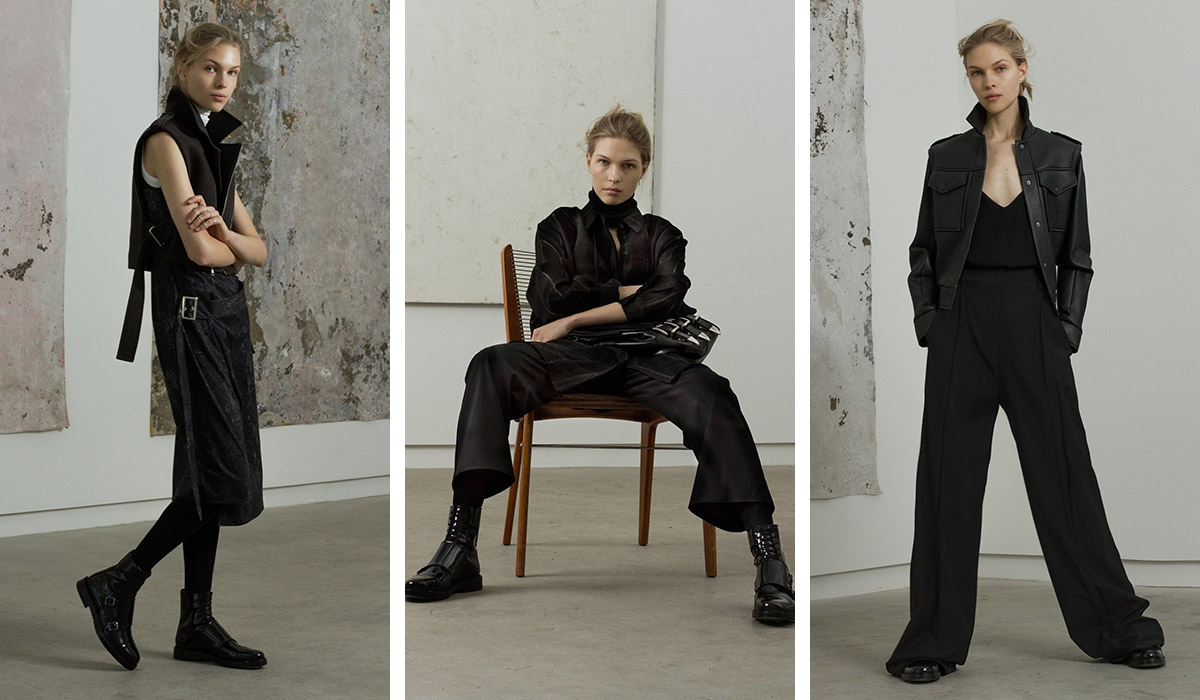 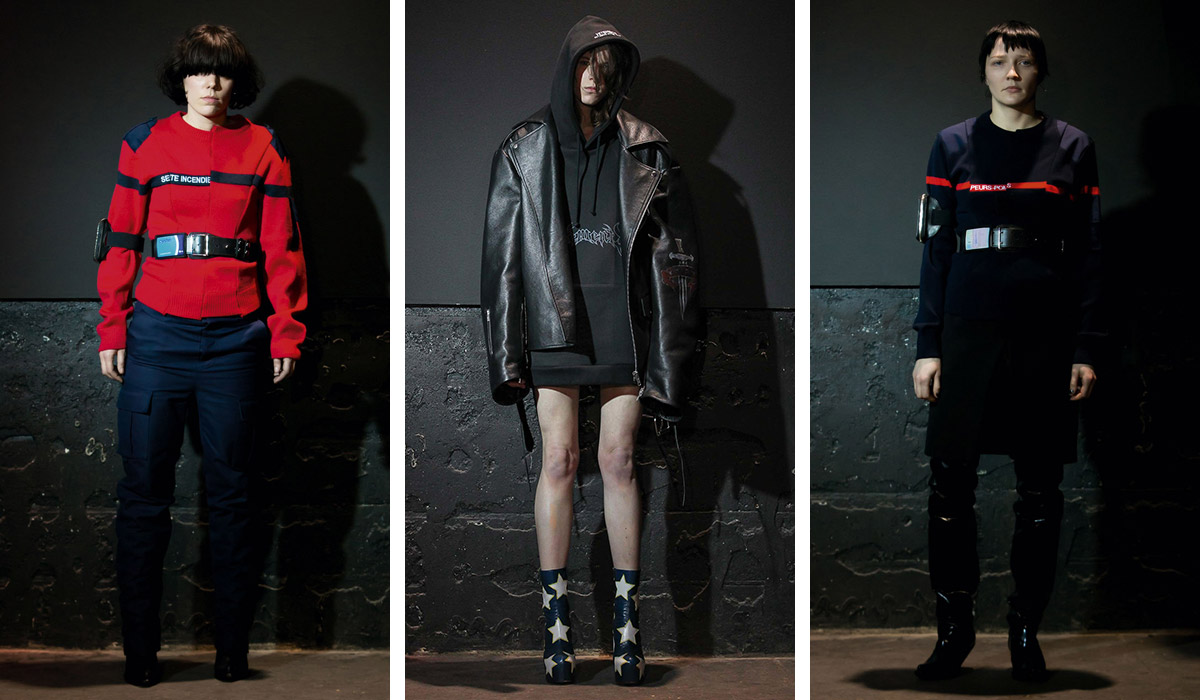 Today, these are the examples of style we’ve found ourselves looking back to and re-creating anew, probably because we are just lurking as they did, hunting for a place to belong. There are the more hardcore trends like leather, combat boots, and gender-neutral anti-fashion, of which employ the same androgyny and yearning for protection. These are stylistic tropes themselves. Again, they are anti-establishment and rough around the edges like punk was.

From a range of 1980s to aughts subcultures we also created health goth, which used a simple toned palette to express extreme and ironic sportiness; cyberpop, the hacker reborn as raver; seapunk and soft grunge, which aspire to use pastel to soften the diehard mentalities of punk and grunge, respectively. There’s cyberpunk, which is much like punk in its anti-establishmentarian and bold attitude, only with dystopian elements like dreads (for their practical longevity), digitized accessories, and futuristic cargo instead of leather and studs. 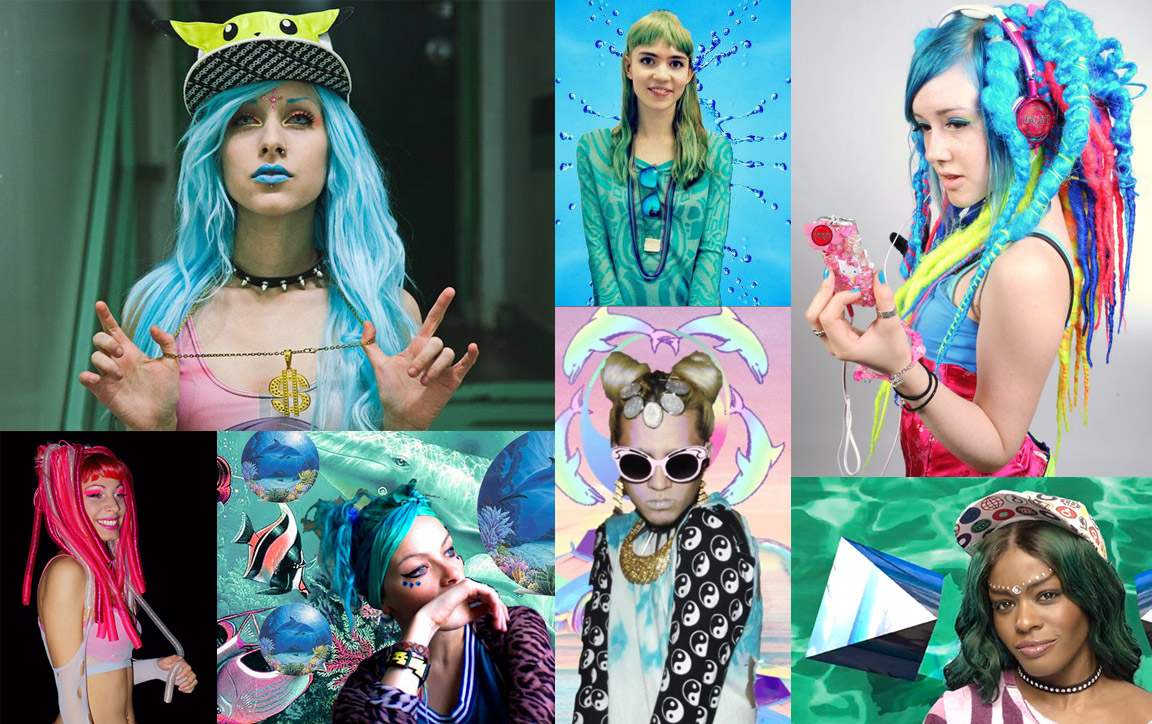 In another rendition, 2015 has a new a punkness in what I call “cyberpop light,” through stores like Shop Jeen and Nylon, a cutesy yet sarcastic style that makes brands out of internet memes, and vaporwave, mockery of digital capitalism of decades passed – both of which would not exist without the ability to reference the internet, emojis, 1984’s first Macintosh computer, and floppy disks. These too are much like hacker and cyberpunk – digital in reference and decidedly tough.

The ironic internet fashion we’ve arrived upon isn’t just funny, it’s so extreme that it’s about as defensive as the protective gear worn by the original hacker generation. Hacker girls were coming to terms with being different for having access to something powerful, and dressed for the job. In our translation of cyber style we are inclined to the same forcefulness, though we tend to be more mocking, in its own way, a tone of badass status itself. Similarly, we are in an era still coming to grips with technology’s overwhelming presence. It’s as if we’ve just realized we could be in this for the long-haul, so we better offensively scoff at it like brooding teenagers dealing with the onset of puberty. What better accessory to the hardness of purple lipstick, leather, and blunt haircuts, than a t-shirt that says “meme-loving trash.”

In the age of the internet, we’ve done more with hacker style than it knew how circa the 1980s and 1990s. But despite the addition of internet irony, elements of the original hacker persona persist. Like the hint of sass and ego that Kate Libby of Hackers possessed, we share the same ability to roll our eyes at those who don’t quite get the dimensions of expression available online. We’re badass. We just hacked away at something we thought was kind of cool.