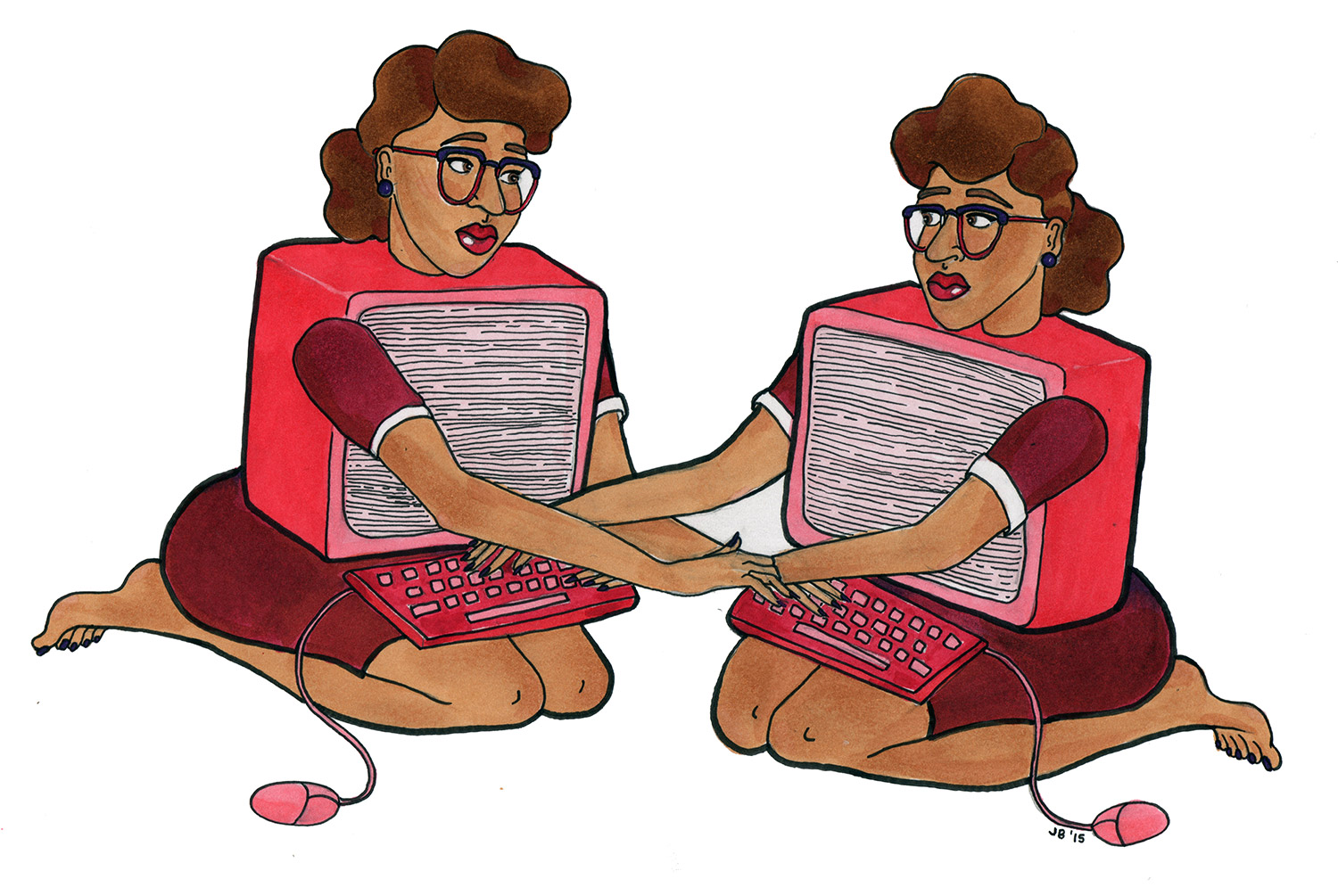 Sexism in the tech industry will not be resolved by the forced intimacy of idealized female friendship.

June 3rd has become a sort of anniversary for me – a funeral march set to the pitter patter of a million ergonomic keyboards – as it was the day that I left my tech job in 2014, and then again in 2015.

I know tech is a vague word. I have to keep it vague for the sake of the NDAs that I’ve signed. I entered it vaguely, too, curious to see what all of the fuss was about. Back in 2012, I joined a male-lead startup incubator, which wanted to force a business model onto the content website I started while in college. It was a good time all around because, even though the incubator went bust, I wasn’t ready for a company and was fed a lot of confidence being the youngest woman in a group of men – men, I might add, who buried insight with jargon and scribbled “return on investment” on Bowery Hotel napkins. On my last day at the incubator I waited for my weekly update while the director loudly criticized an app presented to him by an impressive female founder. It was performative power-play, and all executed while he ate a prosciutto panini.

Even so, the buzz surrounding New York’s new tech boom (and being the eligible youth that every venture capitalist eyed) drew me to another tech position. This time at a small tech agency – the world of male programmers, where superiority complexes have bad postures and watercooler conversations are closer to locker room scuttlebutt. Even lunch time at this place was an opportunity for all of the men to simultaneously shoot up from their desks and flee the room, leaving behind the only two women of the company, me (a Strategist) and the Head of Design. No-girls-allowed meetings took place weekly, even though the other woman was a department head and, though she couldn’t have known it, a valuable worker. We also had a freelancer come in once in awhile; this was always an embarrassing occasion for me, as I knew too much about her. The boys often discussed her suggestive instagrams over beer.

But there was relief at the meetups and panels with a more nuanced pool of tech industry leaders, where one would inevitably meet other women in tech – amazing women, many of them actively working on the problems of our industry and each with an invincible pep in their step. In both a full-time and freelance capacity, I sought out these pockets and thought I struck gold when I discovered hackathons – weekend-long events where teams of programmers, designers, and strategists create working products (be it mobile apps, websites, or otherwise) to win prizes. Participants wear branded onesies, carry nerf guns, cheer on competing teams, and harness all the positive earnestness of a college RA. This is not to say that there is no sexism (dear god, no!), only to say that it’s a real pleasure to see the vocal women of hackathons presenting projects, leading logistics, and generally doing well.

And so, I became a full-time hackathon organizer. The events company I happened to join was female-lead. The biggest adjustment – the one I was most excited for – was suddenly working with a lot more women for a male-dominated field. Small feelings of futility and self-doubt immediately and palpably dissolved. In their stead, a triumphant girl power was enforced. We were a band of women quick to compliment each other, quick to go shopping during work trips, and especially quick to brand every tweet and instagram with #girlsquad and #bossbitch. It was bizarre, this gilded display of sorority – it felt like we were playing house with feminist solidarity, desperately echoing an image of sisterhood so that all the boys could take note.

Our attempts at this solidarity often overtook professionalism, with higher-ups matchmaking colleagues and harmlessly meddling like a retired neighbor might meddle. But romance was not the intended fruit of these couplings – leverage was. The most successful woman in the company, second only to the CEO, struck up two romantic relationships with business contacts and was given a company card, which she was encouraged to use for personal trips to the spa.

Most hackathons, you see, are completely sponsored productions; ours certainly were, as we had no internal budget for them. Instead we offered companies access to hackers and technologists in exchange for food, venue, and cash. While there is nothing inherently wrong here, the expectation of keeping our event costs minimal as an *events *company made it an exercise in getting favors – an exercise that, under our CEO’s guidance, pushed employees to charm potential sponsors (and sometimes to follow through on these flirtations). We were women, after all – a commodity, and very refreshing, too, in an industry of men.

Two months into tech’s leading force of women, and I had become a smiling supplicant of invincible approachability, or as my LinkedIn read, Director of Global Events. I even forced laughter when one of our clients told me my voice sounded like ScarJo’s. This is a wonderful compliment, no doubt, but also one that disarmed me during a business meeting, making the dynamic of tech-woman working for tech-male all the more glaring.

On another work trip, I had to schedule a small meeting of four people and found, upon arrival, that I had been set up on a less-than-professional date with a client. The two female colleagues who were meant to join me cancelled - one because of cramps, and the other for having had a bad day.  But both did come, halfway into the meeting, and only to take pictures of the date from outside the bar. They wouldn’t have been discovered if it weren’t for the bartender who saw and pointed me in their direction as I paid the bill. They were very giggly when found out and showed me the pictures – shaky like the thief-in-action photos of a held-up bodega. It was a prank, though one that felt more akin to hazing than Candid Camera – and not any way to end a professionally weird rendezvous! Though I was determined to never have another.

My first approach– mind you, I was only a few months in at this point – was to reluctantly fasten the first chastity belt I could find: my boyfriend. I became syrupy, squeezing in a, “my boyfriend loved that movie,” or, “George has a mug just like that one.” There were still some cracks in my system; while we were drinking, my CEO asked me to describe the last fight I had with him for an audience of coworkers.

All of this was plenty unsettling, especially as these moments of ill-intent easily became sunny with friendship and affection. Both scenarios were equal products of heavy calculation - the former fraught with animosity, and the latter, with a strained intimacy.

The real shame is that there was genuine camaraderie to be had. In smaller circles, coworkers inched towards the personal on their own: a divorce; the delicate evolution of a coworker’s first lesbian relationship; the heartbreak of parental infidelity. But then, to undermine all of this, a colleague’s difficult week was abbreviated to me by our CEO: Susie was evicted after her boyfriend was found smoking in the building. This was punctuated by a, “Please don’t say that to anyone. I shouldn’t have said that.”

The thing about this last line – a line exchanged while I tinkered in my mind the wording of my quitting speech – was its pre-meditation, spoken to reinforce the trust that my CEO and I had apparently built in a months of close travel and talking about family, and periods, and difficult relationships.

It was wearing on me, this forced intimacy, this ideal of the female relationship as friendship geared towards greater friendship. It goes hand-in-hand with perpetuating tech as “male dominated,” pushing all women in a corner to act defensively, to identify only as our gender, and feed into the corresponding stereotypes. This is where it has mangled feminism, in its veneration of the girl squad and its clique mentality, where the only alternative to the kumbaya circle is #bossbitch malice.

In life, female friendship easily conjures its ideal image (the celestial women of Sex in the City, obviously), and does not leave much room for workplace competition. The professional relationships of women in tech carry both the ideal and it’s extreme foil: schoolyard jeering. Having spent two years in tech, I can’t blame the women I’ve met for mostly reverting to the former image of positive friendship, but I do hope for a move towards treating other women as we treat other men: as simple colleagues. And, while I’m here, I hope that we see the dangers in defining ourselves against the elbow-nudging tech bros, and that we won’t have to travel to the powder room in packs to keep our professional relationships well-oiled and our company well-branded.