Introducing The Hustle Issue: How We Get By

March Horoscopes This month marks the final bout in the three-year battle between Uranus and Pluto. 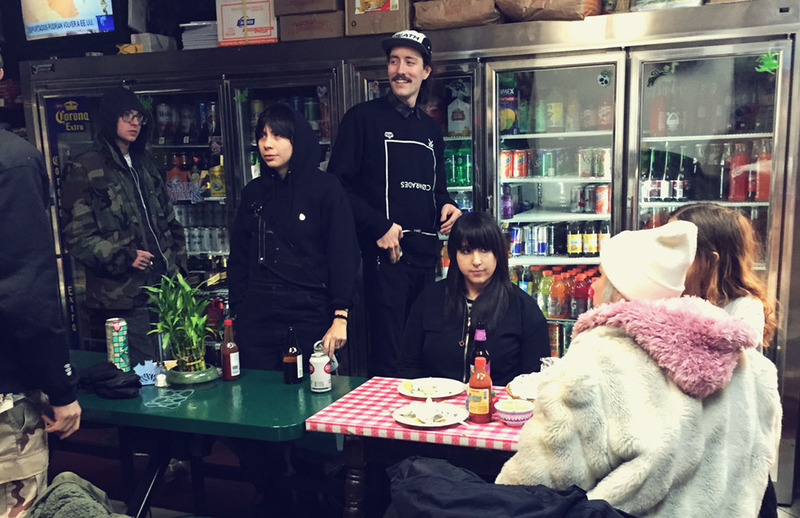 Behind the scenes of this month’s cover shoot.

How We Get By

Late last night, an old college friend hit me up on Facebook and we reconnect over failed dreams. Both admitted to spending the last few weeks depressed over the negative balance on our bank accounts. “My career peaked in college with every job since then bringing me closer and closer to minimum wage,” she says. “I know I could get a job if I really tried, but it’s so depressing – I can’t be bothered.” “I wrote 50 job applications this month,” I respond. “Didn’t hear back from a single one of them. I’m actually relieved – they all probably sucked anyways.”

A close friend of mine recently moved to New York from Finland. He’s a journalist, and intimately involved in leftist economic policy discourse in Europe. Naturally, we spend a lot of time talking about the differences in income inequality between Europe and the US. Europe is fucked, that we agree on. There, the so-called “troika” – the European Central Bank (ECB), the European Commission, and the IMF – took advantage of the recession to push for austerity reforms and force countries like Spain, Greece, Portugal, Italy, and Ireland to cut spendings on welfare, government, and labor rights. Unemployment went through the roof. As Mark Weisbrot wrote in The Guardian earlier this year,

Meanwhile in the US, unemployment is at a seemingly less catastrophic 6.7% – higher than six years ago, but lower than Europe. The US is said to have “recovered” from the financial crisis much faster than Europe, but the wealth gap in the US has never been wider, as that video that went viral a few years ago made very clear.

My Finnish friend is struck by the fact that everyone he encounters in New York – mostly college-educated 20-somethings – seem so much more precarious than his friends in Finland, Sweden, Denmark, or Germany. Most of these American youth have jobs, but still struggle to pay rent, don’t have health care, and are in massive debt. So why isn’t there the same immediate and constant preoccupation with economic policy, he wonders. I offer him my explanations: I don’t really roll with journalists, social scientists, or people involved in politics. My crew of friends are pretty cynical when it comes to politics, and not just because electoral politics are such a farce here compared to Europe. He’s unconvinced. “The difference is that there are jobs here,” he suggests, “however shitty and low-paying they are.”

Having lived in the US for six years now, I’ve grown used to this level of precarity as a part of daily life. I never even considered spending my four years in college preparing for a job, I was just soaking up theory. And besides, none of the departments I interacted with really prepared us for jobs in our field – they knew as well as we did that such jobs don’t really exist. They told us we’d have to work for free as interns for years or accept low-paying service jobs. Or they encouraged us to postpone that traumatic realization by going to grad school, hoping we’d be the lucky ones to get paid to do so instead of taking on even more debt.

It’s more complicated than unemployment, for sure. We know we could get a job if we really tried. But the life we’ve lived, the disposition we occupy, the subcultures we came of age in ... together they produced a whole generation of people who just can’t stand the idea of working a 9 to 5 surrounded by the “normal” world. Rahel Haile captured it so perfectly in our interview with her and DonChristian Jones of Camp and Street last month:

I can’t live in the normal world anymore. I can’t get a job, because I can’t stand anybody. I hate everyone except for my friends. Can I get a job with my friends? And I guess that’s kind of what I did.

I could have stayed at my waitressing job but I couldn’t stand another day there tbh. Did I choose to live precariously? It seems we have options, and even though none of the options are desirable, whatever situation we find ourselves in feels chosen on some level. We accept it, because we’d rather hustle than get a “real job”. Instead, we work for co-ops; freelance; make art and music; sell sex, domination, and seduction; deliver weed; stay in school. But the things we do, the things we produce on the margins, they’re not just for us. They produce meaning and value. Meet any consultant firm worker, stock broker, banker, finance journalist – chances are they won’t be completely unfamiliar with the underground artists you follow or roll with.

We don’t see the value we produce in the form of paychecks. We see it in the form of cultural and affective influence. We’re fantasizing about going to space, producing new worlds. We’re sustained by these fantasies, because what else is there to live for in this dumb, dumb world. But we’re also producing meaning for everyone else, giving people something cool to do on Saturday night.

As the end of the month comes closer, all my friends become increasingly irritable. Over beers we confide in each other our troubles with paying rent. Nobody offers to help each other out – not because we wouldn’t but because we’re all equally broke. And besides, most of us have ways to make 20 bucks here and there when we need to. It doesn’t solve the problem of next month’s rent, but it does cover up the fact that we don’t really own anything of value and probably won’t in the near future. Frequently enough we have the money to ring up a bar tab sufficient to make us wasted and compared to the week before it feels like some form of luxury. It’s enough to remind us that unlike many, including many we know, we’re doing ok.

On Twitter it’s easier to be honest about how we feel. There, the train of sociopathic, morbid thoughts constantly swirling through our minds can find its proper audience: one that favs and retweets instead of asking you to talk about your mother. This collective, ironic indulgence in sadness, misery, and being complete losers is our main force of camaraderie right now. We’ve stopped hoping for something better. We just want to capture it all succinctly in a series of tweets.

We’ve reached a point where our experience of the world as miserable is so broad, total, and yet fragmented, that we no longer experience it as misery – it becomes “just” existing. On Twitter, we share our sadness with each other and even though we’re mostly ironic, the number of likes and shares is proportionate to an experience that we wouldn’t call happiness but something like it.

And I think this is the key difference between the US and Europe at this moment. In Europe, people still experience politics as relevant – political decisions have a real impact on people’s lives. In the US, we’re seeing the emergence of a generation who is completely disillusioned with power and capital, but who is not “doing anything about it” because, intuitively, we know it’s pointless. We’re watching Washington get replaced by Silicon Valley tech campuses, we happily join every service that will help us track our lives because we know “privacy” does not belong to the future, we know we have to rely on Soundcloud, iTunes, and Amazon to distribute our art, and that we’ll make them richer in the process. “The present feels more future than ever,” DIS Magazine wrote about the New Museum Triennial*.

At the end of the day, I lug myself back to the apartment, throw my bag on the couch as my roommate offers me a beer, reminding me rent is due tomorrow. I fumble for some excuse, embarrassed, knowing he’s been fronting rent every month since we moved in. He’s the only one with a “good job’ and “competitive salary” and doesn’t complain, but I’m starting to suspect that has less to do with his money situation than him being a good friend. I stay awake at night worrying myself sick about all the money I owe to people. Later I reprimand myself for internalizing the logic of capital. We all need to contribute, but we’re building the commune, or something, and trying not to think in terms of mine and yours.

Every once in a while somebody finds an old credit card and treats the whole party to drinks all night. On those nights we’re truly content.

This is The Hustle Issue, in which we explore how people deal with precarity, the strange ways some us of manage to get by, and remarkable stories of scamming. If you’re in New York, you don’t want to miss our very first party LRAD, which takes place at ALLGOLD this Saturday. On the cover this month are the DJs and the visual curator who will be performing at the party: Quaco, Mary S., Abby, GENG, STUD1NT, Ciarra Black. Go to LRAD.NYC or the Facebook event to RSVP and find out more.