I’m Breaking up with My Queer Punk House

This week in ACAB: In 2015, the USA’s police killed more than 1,115 people, including 19-year-old student Quintonio Legrier and 57-year-old mother of five, Bettie Jones.

Get to know the style, tunes, and hometowns of Sophia Hussain, Ruby Brunton, Ash Jegroo. 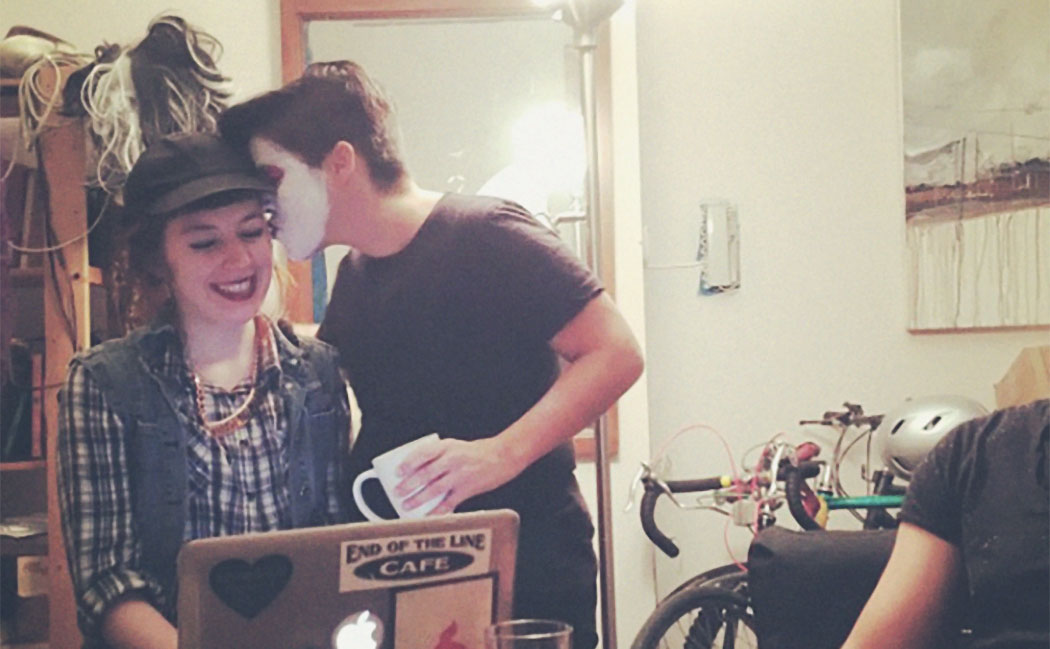 I’m Breaking up with My Queer Punk House

Saying goodbye to your queer house is harder than you would expect.

I believe the Craigslist ad said something like, “Be careful, if you feed us after midnight we might turn gremlin!” It had all the ingredients that any poor queer, confused about their gender, moving to New York from Florida on a whim would be looking for. Things like “glitter punks,” “freebox,” and “haunted cat.” My friend Loren and I jumped on it, responded to the ad with something stupid that our naïve Floridian minds probably thought was clever, and more or less stopped looking for other places. Our only other option for housing at the time was with a few acquaintance-friends from college. When they eventually told us that they thought we were too unstable to live with, or that they didn’t think we’d be able to pay our rent on time, all our eggs were left in the Hoegarden basket.

The Hoegarden was in Bushwick and turned out to be cleaner than I expected. It was also kind of the best place ever. It was a revolving door of punks, tranimals, trinas, witches, and general queerdos. We were all manic, or anxious, or depressed, or drunk, or chain smoking, or hungover, or sleeping. We ate mushrooms and watched the country music awards, shared clothes and makeup, stayed up all night processing and reprocessing and drinking crazy stallions. It immediately felt like home and not only because the people ruled. There was an eccentricity to the space, it was saturated with a queer apostasy of the straight world.

I was standing in front of the mirror that hung above the couch. The mirror had two decorations. In the bottom left corner there was a black and white polaroid of a woman with 1950s-housewife hair and sharpied-on red lips. In the upper right corner of the mirror lingered a sticky ring the size of a Foster’s can. From the ring’s lower half, a smear extended down before abruptly confronting its maker: a massive white silicone cock, textured with nearly bursting capillaries that was suction-cupped to the mirror. If you looked closely, you could see several stains and smears layered in an offset fashion. The anti-sisyphus, our mirror-dick’s capitulation to gravity was interrupted regularly by one roommate or another plucking it off, spitting on its suction cup, and re-adhering it to the top of the mirror so that it could begin another saliva-waked descent.

I was struggling to attach a long purple ponytail to my unruly curls, which were brittle from being bleached to hell. My friend was in town and we were going to the Matisse exhibit at MoMA. I found a neon yellow sweater in the freebox, crop-topped it quickly, and had my friend clean up the edges after I put it on. They decided to snip a series of cutouts into the back. (Later, at the museum a lady asked me if my top was an original Matisse cutout, I couldn’t tell if she was being serious or not.)

My roommate’s door cracked and they infirmly asked me if I would be around for a little while because some folks were coming over to make a documentary about them but they were going through withdrawal and needed to sleep. They wanted to make sure that I’d be able to get the door when the buzzer rang. I was happy to spend another two hours putting on eyeshadow, so my friend and I postponed our MoMA trip for a bit and hung around. When the film crew showed up, we learned that the camera guy had been involved in a Beyoncé video. It felt to me like something anyone could say and no one could check, but his crew backed him up.

The Hoegarden was a nexus of queer circulation. It respired a steady stream of folks, in – like a well-rolled cigarette, giving them a place to stay when they needed to crash or fuck or hide or whatever – and out – like stale morning breath, effusing alcohol but still demanding a lingering goodbye kiss. The basement was loaded with generations of queer trash and treasure. The flow of people dropping off and picking up created a kind of current that kept everything cycling and getting combined and lost and found or stolen by someone else. Rooms were vacated and filled and vacated again until it was Loren and I who had been there the longest and I found myself writing the queer exchange ads for new roommates.

Maybe a year after I arrived, we had a subletter move into the front room for a month. I actually didn’t write the ad that secured them. I’m not sure I could have written an ad that would have sparked this person’s interest, but whatever call outs I dispersed hadn’t been successful, so another roommate recruited a random from fetlife with no real mutual friends.

Loren and I were laying in our respective beds, probably lamenting the necessity of eventually engaging with the outside world or maybe just gazing quietly into our respective screens. That Björk poster where she’s naked in the woods with her tongue out hung above my bed. I don’t know if it was her carefree aura or just my laziness paired with the admirable ability to completely ignore a situation, but my side of the room was always a mountain of dirty clothes while Loren’s side was barely a foothill. The room was small – obviously – and between our beds was a one-foot wide question mark-shaped path that went from the living room door to the backyard door. It was generally impassable. Even on the one day every three months when I cleaned and did laundry, the wire shelves I had instead of a dresser blocked the backdoor so that getting in and out was always a matter of physical exertion and anxious squeezing. (I just now realize the metaphorical significance of the poppers I kept on the window sill, in arms reach of both the backdoor and my bed.) While I loved the room and I loved Loren, there were times that it felt like a trap. For example, during especially depressive phases when the blackout curtain stayed down for two or three days and my clothes mountain swallowed me, the only evidence of human occupation being empty Cherry Garcia pints and crusty lo mein containers.

The new subletter gently knocked on the frame of our open door to the living room. I can’t clearly remember – and this feels like an exaggeration – but I think the first thing they said was, “Am I making you uncomfortable?” They were painfully awkward. It’s not that Loren and I minded awkward people; we were both prime examples but at least we had the sense to know that if things were really spiraling you either: drink, leave, or sleep. The subletter told us they were in New York for a nerdy queer anarchist hackathon, something that usually would have turned me on but they managed to turn it against me. Every few sentences they paused, then repeated their catechism. “Am I making you uncomfortable?” By this point I had memorized my answer and numbed my face into a constant gentle smile. “No, this is really interesting,” I assured them. Trapped.

The whole month was like this. I could never really engage with them and it took me a while to understand why this irked me so acutely. I finally realized that while plenty of awkward, shy, and freaky people came through the door, something about the space usually created a mutual comfort. It was safe. People felt safe there. Even when I was psychologically trapped under my covers, I felt safe there.

I had to move out of the Hoegarden almost two months ago. Shit happens, paradise doesn’t last, the latin translation of utopia is “no place,” and so on. It’s over. I had to move out of my apartment and the breakup felt more personal than with any person. Not that it made me sadder than my past human separations, in a way I was ready to move on. But I’ve stayed friends with my ex’s, we talk on the phone, I like their instagram posts. The Hoegarden is over, it’s gone and I’m just coming to accept that and I’m still reeling and trying to understand how a person could love a space so much. And did it love me back? And is it also hurting?

I miss living in an apartment that had 20 sets of spare keys floating around the country and where anyone might show up, walk in like they were just getting home. I’m afraid of what it means when we lose the spaces that feel like ours in a world where we otherwise don’t belong. I wonder if falling so deeply in love with a space is just a symptom of despising the rest of the world. I’m afraid that without these spaces we won’t be able to practice being miserable together so that when whatever immanent disaster comes we’re prepared. 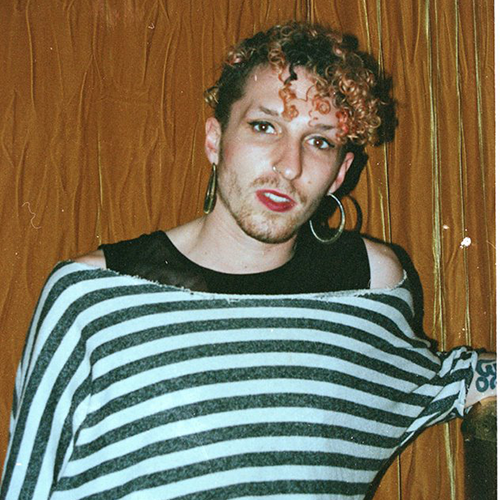 Tait Mandler sucks at gender, but seems to be adequate at academia. They study urban space and are convinced that their depression comes from being unable to grow long nails.