Prisoners Launch Nation-Wide Strike Building on the 2016 prison strike, this one is predicted to be even bigger. 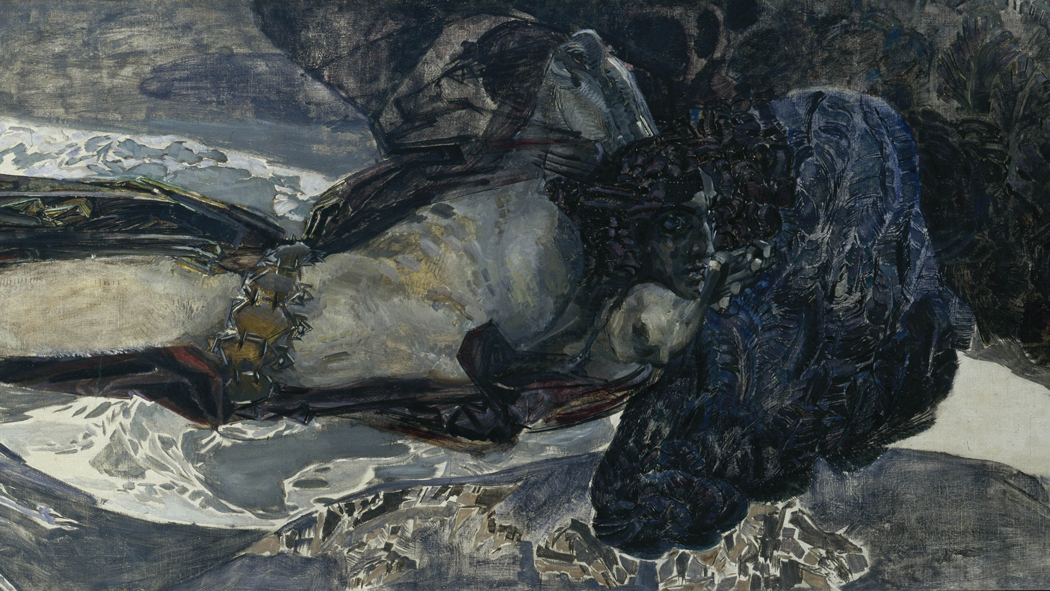 We learn the art of self-sabotage from a world that tells us it’s in our best interest to be hard-edged and alone.

“Sometimes dutifully falling and getting out, with
perfect fortitude, saying, ‘look at the skill and
spirit with which I rise from that which resembles
the grave but isn’t!’”

From 2009 to 2012, I ended most of my nights dead drunk, stumbling home, falling face-down on my bed, and sobbing violently until I fell asleep. I often felt like some hideous creature was trying to break out of my skin. I’d heave and labor to release it before losing consciousness, and wake up throbbing in the dull morning, untransformed.

The hours and days leading up to those moments were always the same. I attended to keeping myself alive in a haze of anxiety and self-doubt, pretending I was having a good time and compulsively reaching for a drink to ease my consciousness until I’d had enough that the fog lifted and I could finally laugh or dance or hold a conversation without rubbing against the electric fence of my insecurity and brutal inner monologue. I’d have a good couple of hours at the bar or the house party or the basement show until a heavy curtain would close around me. Everything slowed down then. It felt like being underwater, way down in the dark part of the ocean with the crushing pressure and the giant squid.

I drank to feel nothing, and nothing felt like a small, dark cave that I couldn’t see my way out of. In that state, I hurt myself, I said awful things to people I loved, I destroyed my friends’ houses and prized possessions for no reason but to appease this creature raging inside of me. Then, I went home and cried. I didn’t understand why I kept doing this. It seemed like every time I had something good in my life, I would ruin it in some inexplicable act of self-sabotage.

A few years ago, during a period of sobriety I hoped would be permanent but wasn’t, a friend told me about something their housemate had seen, a black-clad figure dancing with a burning knife on their front lawn. Yes, really. It was unclear whether this was an act of vigilante performance art or some sort of spiritual vision. Regardless, my friend was a little freaked out.

That night, I got home from class and found the same figure in my bedroom. Yes, really. I knew it was not a physical being, but a spirit that had somehow found its way in. A spirit, a memory, a manifestation of trauma, a projection of my shadow side, whatever. There it was, in front of me. It was a vacuum-black humanoid with red and white markings on its face. I was terrified. I did everything I could think of to make it leave. I burned sage. I prayed. I wept. It laughed in my face. I hung a piece of obsidian, a stone with the ability to pull out the truth in all situations and give us the strength to face it, around my neck. The spirit said, “You need me here.” I took the necklace off and threw it across the room. The spirit dissolved and reappeared in the corner, as though waiting for me to go with it somewhere. Finally, I gave up and went to bed. It hovered over my body as I slept.

The next day, following the advice of a friend who I knew to have had similar experiences, I tried a different strategy. I looked it in the eye and asked its name. It answered that it had no name. I asked what it was there for. It said again, “You need me.” I asked what I needed it for. “Protection. It’s not safe. You’re not safe.” The words overlapped each other like echoes. Feeling hypnotized, I assented, wordlessly, and for a moment the borders of my body blurred and rearranged themselves. The spirit wedged itself into my chest, where it grew several sets of hands that enclosed my heart like a sepal around a developing bud.

At first, I did what it said. I called on this spirit when I felt afraid, when I needed strength to carry myself through trauma, when I had to fight to keep myself safe. It was right there. It came through, solid and powerful and dark. Over time, the process became automatic. It was like the spirit’s hands deflected fear before it reached me. Where alcohol had failed, this dark spirit succeeded. I was closed in.

The problem with suppressing fear is that you don’t actually know when you’re safe and when you’re not. It’s been almost four years since that night. In that time, I’ve wondered with increasing frequency if I made a bad deal, if I can really trust the power I’ve allied myself with. I’ve spent so much of my life trying to rid myself of the emotions I associated with vulnerability. It took me this long to realize that that is exactly what put me in harm’s way.

During the worst years of my drinking, I lived for a short time with a man who sexually harassed me every day. He was a friend of a friend and I had nowhere else to go. He was also a drunk, like me. He told me that the least I could do was suck his cock, since he took me in and all. When I refused, he threw tantrums that ranged from juvenile whining to violence. I was scared of him. He was obsessed with war, stockpiled weapons and memorabilia. I remember his breath when he grabbed me, whiskey, the knife on the table. I wanted to be tough, like him. I wanted to be unbreakable.

I began to imitate him, thinking this was power and that if I had some, he’d leave me alone. I talked like him, swaggered like him, drank whiskey like him. I closed myself off to people, too afraid to let my mask slip even for a moment. If our beauty, our sweetness, our openness, leaves us vulnerable, then we make ourselves ugly, sour, closed. It seems to be what the world wants from us. The vulnerable parts of ourselves go into hiding, and find their way back out later in new, corrupted forms.

I think about Medusa. Athena punished her for her rape by turning her into a monster and giving her this superpower, this curse, a gaze that turned its object into stone. This power kept her safe but made her unable to really see another, or to be seen. We do this to ourselves. I did, in the name of safety or because it’s all we know. We learn the art of punishment from a world that tells us it’s in our best interest to be hard-edged and alone.

I learned that it was only through access to the kinds of power that terrify me instinctively that I could ever be safe.

Each of us comprises, within ourselves, a system of intricate interdependence, wherein there are parts we celebrate because they perform a certain socially valued function, and parts we shun because they don’t. Their relation mirrors those we see and experience in the world. By observing how power operates in society, we learn infinite creative ways to push down the parts of ourselves that make trouble, but those parts don’t just go away. They push back.

If sabotage is an act of purposeful destruction by someone being exploited for the profit of one more powerful (the word originating from the French sabot, the mythical wooden shoe thrown into the machine that would ruin workers’ livelihood), then an act of self-sabotage would be the exploited part of self, the unseen and undervalued, finding the best way it can to become visible, to get its needs met, to survive. Our fears and traumas need us to see them, to make space for them in our lives, to love them, even. That doesn’t mean we let them drive – they are far more likely to do that when we don’t consciously acknowledge them. It means we look at them, hold space for them, help them heal.

I kept the obsidian from my first night with my demon in a box for a long time. I was afraid of it. After a couple of years, I took it out and started wearing it around my neck, on a long chain so that it hangs in front of my solar plexus.

When it started to feel like spring and I grew tired of languishing in my usual winter hole, I went to a palm reader. She told me that the methods I’ve been using to protect myself have become oppressive to me. I knew exactly what she meant. I went home and looked for my heart. I saw the spirit’s hands there and I saw them unfold. I saw my heart, itself, not a doorway or a pool of light, for the first time in years. It shivered and gasped for breath. I released that spirit. I agreed to be vulnerable, to let my heart breathe.

It’s not quite that simple, of course. The old habit of deflecting and hiding from the things I don’t want to feel will take time to leave me. The spirit’s hands melted into a sticky, black ooze which I am slowly and gently pulling away from. In this process, I welcome fear, because this means I am present with vulnerability. Feeling fear means it’s working.

After looking into my heart, I sat down in front of my living room window and watched a sliver of moon peek through the cherry trees. I put on my obsidian pendant but without the attachment to the spirit it felt wrong, like a staticky radio signal. I wrapped the stone in green thread and walked it down to the water.

When I got there, I said a prayer to be delivered from the tyranny of myself, and threw the quiet rock into the churning water while the lights across the bay flashed on and off in a disjointed rhythm. The water, unbroken, swallowed my spirit and carried it away. Like curtain rising, the night opened up. 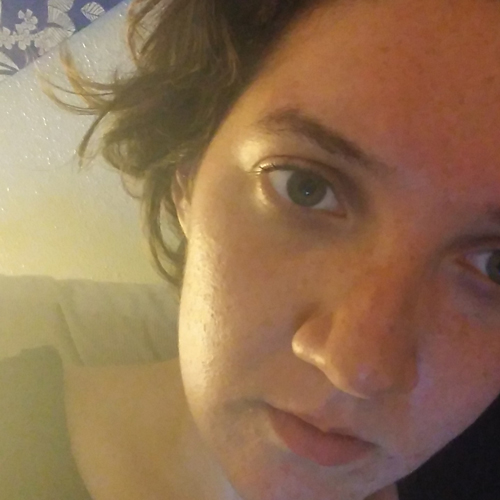 Silence Merry Roads is a poet and witch living in Olympia, WA. They read tarot, sing to the trees and write about the moon on Instagram @silencemerryroads.